By Saz
WWE DVD Reviews
This page contains affiliate links. At no additional cost to you, we may earn a commission if you click through and make a purchase. Learn more

Once upon a time there was this small company that took on wrestling in America, led by a guy called Paul Heyman, they carved a niche in wrestling history by being the most extreme, most energetic and blood thirsty promotion on TV. 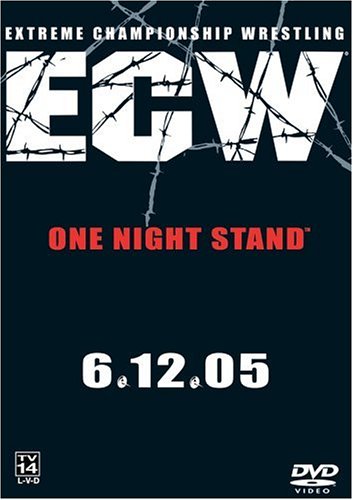 The name of this company? ECW of course.

Then they were swallowed by the people with the money, the wrestlers absorbed and ECW became a fond memory of the fans, so much so that the WWE were forced to concede that the franchise was worth at least one more crack.

Thus One Night Stand was scheduled and the resulting DVD is now ready for your viewing pleasure.

For ECW-aholics, and as I have found out recently, there are quite a few, this is the perfect compilation of memories brought back for one last encore. It is also a “back to roots” celebration as a lot of ex ECW wrestlers have made it as WWE superstars, which for those who want to learn American wrestling history, this DVD is a great starting point.

The camera quality, angles and atmosphere were rough, but you could tell this was purpose rough, it’s WWE money but lets not spend too much, I liked it, it felt homely.

There are some really, really good matches in this DVD and was in fact a refreshing change from the dross that the WWE have been spouting recently. These weren’t the blood fests, in fact the wrestling in the show, and when I say wrestling I mean wrestling, was next to superb.

Lance Storm V Chris Jericho was a very good match that I think anyone who wants to study wrestling and how a good match is put together should study this match very carefully.

It was good though that to the most the WWE allowed ECW to run their mouths and they got away with a lot.

I felt ECW remembers was an important epitaph for the people who had entertained so many and could have been forgotten, it was great to see ECW allowed to remember their own.

Unfortunately, the whole thing felt a bit rushed and some of the parts seemed forced to allow people to be seen by the fans. Ok, so it’s not a criminal waste of talent, but it left me thinking to myself “why isn’t this guy wrestling?”. Well, apart from RVD, that was obvious!

The other was the amount of adverts, ok I can accept it at the start of the DVD, but there was one slap bang in the middle of the action, it throws you off kilter as you’re expecting it to be another history of ECW short, well it is, just the other DVD you can buy!

My biggest gripe? I think that the fact WWE got involved at all ruined the whole PPV for me. Yes they were there to hate, yes we got to see them run out, but why? This was an ECW night and that is how it should have been. The fact that JBL’s ugly mug was shown all the way through people’s matches was really a bit of an insult to the people in the ring, I wish Vince would stop trying to mess with things that are just not broken.

The best bit? It has to be Paul Heyman’s promo, you could see and feel the emotion from that guy, it is a moment that has to be seen, real lump in the throat stuff!

The adverts for the show, viginettes of some of the ECW wrestlers, the explaination that the WWE in fact funded ECW and now fund it again, ECW fans telling us why we should love ECW and finally JBL shouting his mouth off, just to remind us yet again that he’s a WWE wrestler, leaves a bitter taste in the mouth, especially with the lack of professionalism he showed during that night.

It’s as close to ECW as WWE is ever going to allow, as long as we’re reminded that this is because the WWE allowed it and as long as there are WWE superstars in it. It is a shame because everytime the matches begins to draw you in, the WWE pops up again and reminds us that it’s their show really and it ruins the flow.
That aside though, I think that there is some great work from some great talent, perhaps a little too much bloodshed for my tastes but for your ECW fan it’s just about right.

I think the addition of JBL’s thoughts really puts a final insult to ECW fans, but then again he did his best to ruin the night, so I’m not surprised he’s tried to ruin the DVD.

I would highly recommend this DVD to the casual fan though, it’s worth a look!