DVD Review: Sting – Into the Light 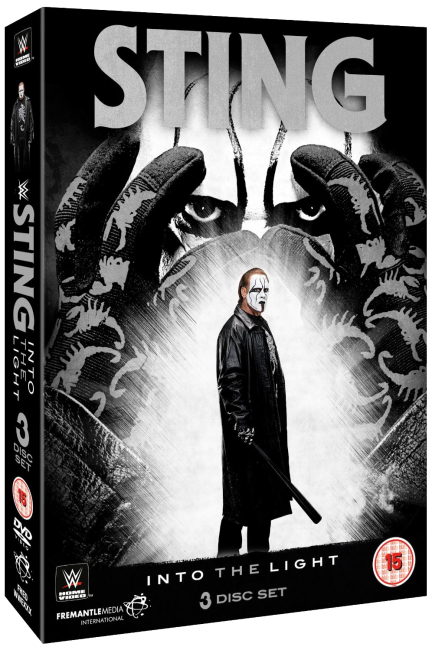 Sting, the last bastion of World Championship Wrestling, is now firmly entrenched in WWE and as is customary for legendary performers, he now has his own profile DVD.

The first disc (as is the standard) comprises of a 1hr documentary that gives a timeline history of Sting from his “being invited to wrestle while working in a gym” story we’ve heard before, through his early team with Rock (who would become Ultimate Warrior) and on to his time in NWA / WCW up until THE LAST NITRO™ against Ric Flair.

Surprisingly, in what I believe is a first, TNA gets a bonafide name-check in an official WWE product. It’s only a passing reference, but it’s there nonetheless.

The framework for the documentary is a fly-on-the-wall style as we follow Sting on his journey to WWE Headquarters to discuss the details of his joining the company and it’s genuinely cool to see his awe at the scale and scope of WWE in comparison to WCW, even at the Atlanta-based promotion’s peak.

The title of the doc is ostensibly based around his faith (like Shawn Michaels, he takes his Christianity very seriously), but one really cheesy thing is that when the title pops on the screen, it’s is immediately preceded by Sting walking into the HQ building in Stamford and then a flash of bright, white light.

Coincidence or a subtle dig against WCW / TNA as Sting enters WWE? I’ll leave that for you to decide.

As stated earlier, this is a fly-on-the-wall story with only a small smattering of talking-heads in comparison to previous releases (one of whom is Rick Steiner, who rather surprisingly looks healthy, happy and in great shape). One of the great ideas is having Sting talk about famous matches from his career while he watches them on the WWE Network, especially as he’s watching them for the first time in a long time. It’s just a shame this isn’t featured more than it is.

The rest of the documentary is Sting attending merchandise meetings and the palpable feeling from him that WCW was never like this. It’s a fascinating microcosmic insight into the inner-workings of WCW’s Franchise.

Oh, and the little matter of actually signing his WWE contract on camera.

If your only exposure to Sting is his WWE run and your looking for a history lesson, then this isn’t really the collection for you. Sure, there are historic matches over the latter two discs and the production deserves a ton of credit for making sure there are no repeat opponents, but the documentary gives only the most cursory glances to his time in The Blade Runners (which is essentially repeated from the Warrior DVDs) and not much more to his run with the NWA and WCW.

The documentary itself is really good for what it is and comes across more as one of the WWE/24 exclusives from The Network rather than a profile retail release. That in itself is not a bad thing, but it seems a little light for a collection.

Matches on the disc do a good job of avoiding repeats from previous releases and cover a respectable run of opponents from the different eras of Sting.

The “stories” on the second disc are basically outtakes from the main feature, but some of them are really great. The IGN section and the WrestleMania Access clip are really good, while the other stories range from funny to poignant. Getting Brad Armstrong and Tracey Smothers on a DVD in 2015 is always a special moment too, just for the record.

As with other releases, having access to The Network means you can view a lot of the matches on the set if you look for them, but this saves you the trouble and not one of them drops below “good” in quality. Due to this, The Network doesn’t reduce the value of the set as much as previous collections have.