“OMG! The Top 50 Incidents in WWE History counts down the most outrageous moments in the history of WWE. What moments will make the cut, the top 10, and what is the greatest moment of all time? Is it the King of the Ring tournament where Austin 3:16 was born? Mick Foley’s devastating fall of the top of the Hell in a Cell cage? The Montreal Screwjob? The explosion that consumed Mr. McMahon’s limo? This three-disc set is the perfect release for fans that love to debate which moments where their favourites.“ 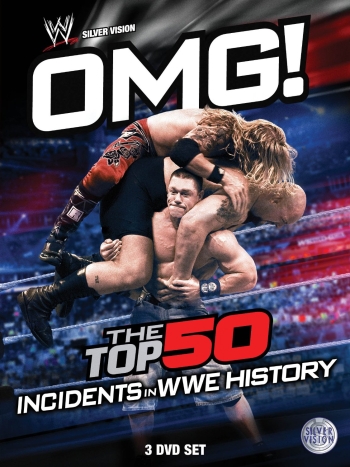 You see those words at the very beginning of this review? No, not the title or my name; the first piece of text. That’s the official spiel from Silver Vision’s website, but as with every list of this nature, you’re not going to please everyone. At least once, every single person watching the main list will come across and entry and rather than the expected OMG, the reaction will be one of WTF.

Now, to clarify quickly and spring to the defence, this is not a list of the most shocking or most outrageous, but simply the top incidents that happened within WWE’s existence. They could be amazing scenes of happiness, violence, comedy, betrayal or just good old-fashioned fun.

There are moments missed (some understandable, others not so much) and some I look at and wonder why it’s there, but for the most part it’s a good list of things, even if does feel like WWE is running out of concepts for the DVD market with this release.

There’s a lot from the Attitude Era as you’d expect and a lot of the incidents had me grinning as my memory kicked in (Jake at Liz’s wedding, The Rockers officially breaking up, the utter awesomeness of “TYSON AND AUSTIN!!!” that viewers today would be unable to fathom just how huge an event it was).

It’s not essential viewing, and the “OMG song between EVERY FUNKING SEGMENT will get on your tits, but it’s a good way to waste a bit of time and, as you’re about to read, the second and third discs really are worth having.

On discs 2 and 3, you get a lot of the great moments and matches in their entirety. Well worth repeat viewings from the moments side of things are “Tyson & Austin”, Austin hitting the Stunner on McMahon for the first time, Austin and Booker T in the store (sensing a pattern here) and The Rockers splitting up on The Barber Shop (one of the greatest tag-team-splits segments you’ll ever see).

As for matches, we really are spoilt for quality, with only Undertaker v The Dudleys being a stinker. Shane McMahon’s two outings against Steve Blackman and Kurt Angle are amazing, Edge v Cena at NYR is so heated for a sub-2min encounter and Edge v Mick Foley is as brutal as you remember, TLC II is literally edge-of-your-seat intense and filled with insane spots from all six (technically nine) participants.

Rounding out the greatness, Undertaker v Mankind’s HIAC is rightly considered legendary and you can see why it has attained mythical status, Undertaker v Triple H from Shotgun Saturday Night is interesting due to the unique setting and Shawn Michaels v Diesel’s “No-Holds Barred” war is just stunning from beginning to end.

It’s times like this, when you get the chance to look back, that I’m glad I’m a wrestling fan and was around to witness pretty much every moment listed.

As with all list-based releases, everyone is going to have something they feel deserves a spot be left out and something they felt sucked be on the list. It’s the nature of the list and there’s no point in dwelling on what should or shouldn’t be there; instead, just focus on what is there and take from it whatever enjoyment you can.

The list itself can be whizzed through at a swift enough pace, but when you get to the rest of the content, it really comes into its own. For the newer fan, there’s a chance to catch up on all those matches and moments you’ve heard the older fans talk about, but haven’t had a chance to see for yourself.

Ever heard someone say “that was a good segment, but it’s no FILL-IN-THE-BLANK? Well now you can check out for yourself why Michaels smashing Jannetty through a window was so awesome, how unbelievable the night Austin went to Pillman’s house was or why TYSON & AUSTIN is possibly the single most heated and chaotic moment of all time.

Great matches (one stinker), some amazing moments and a fantastic walk down memory lane make this a worthy purchase. My only complaint is that there isn’t more from yesteryear and the content is too Attitude Era-centric at times. That’s a small gripe overall and, like I said earlier, proof you can’t please everyone.

Also, if you buy the Blu-Ray version, you get the following additional content -: