Devon along with Bubba Ray are one of the best ever tag teams to step inside the squared circle.

The Dudley Boyz wrestled in ECW, WWE, TNA as well as in Japan. Winning tag team gold in multiple companies has given them the title of the most decorated tag team in professional wrestling, winning 23 World Tag Team Championships.

Since going their separate ways, Devon and Bubba have joined forces once again and now the 40-year-old from Brooklyn, New York is the Sgt. at Arms of the Ace & 8’s group in TNA as well as holding the Television Title.

We caught up with Devon to talk about his legendary career in ECW, WWE and TNA, comparing his three bosses and what is in store for himself and the Aces & 8’s plus much more… 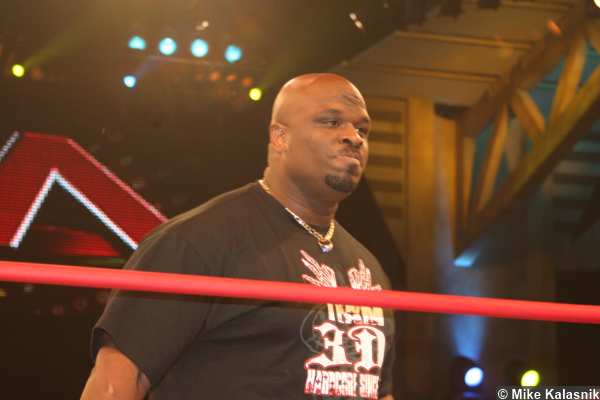 You along with Bubba Ray came on the scene in ECW, what was that whole experience like?

ECW was an amazing time, the company, in general, was so family orientated and we were all aiming for the same goal to make sure that ECW wasn’t going to be a fly by night company, that it was to be taken seriously and that we were starting a revolution.

We had a great following; some might like to say it was a cult following which actually helped put ECW on the map. Paul Heyman took unknown guys that WCW and WWE didn’t tap into and he made them into stars himself, which in return made the other two companies look at ECW.

To me, ECW was a phenomenal time and we were able to help change and revolutionise the business into the Attitude Era, which was great because nobody at the time was doing the stuff we were doing, pushing the envelope of hardcore, and then when there was such a high demand for it that opened the door for a lot of us.

Bubba and yourself then went over to WWE during a peak era for tag team wrestling with The Hardy Boyz and Edge & Christian, what was it like working with those teams and the TLC matches?

That was another amazing time in my career; to be able to be in the ring with five other guys and to steal the show at WrestleMania two years in a row was awesome. The TLC matches were matches that had never really been seen before; the closest thing to a TLC match was just a ladder match that was performed by Razor Ramon and Shawn Michaels. We then added the tables and the chairs into the mix and made it what it is today and it was just great to go out there and entertain throughout that whole attitude era.

Everywhere we go out of all the matches we’ve had, the TLC matches seem to be the one that pretty much everybody still talks about today.

You and Bubba then joined TNA and began working with the likes of Beer Money and Motor City Machine Guns, what was that like?

It was great because we were able to help these guys and literally pass the torch of tag team wrestling. We had accomplished so much in the business and it was time to be able to pass it on to guys like Beer Money and Motor City Machine Guns and they were great to work with.

It was so easy because these guys wanted it just as bad as anyone else did. To be able to have talent like that, and they were willing to get in that ring and give it one hundred and ten percent and do what you ask of them for the sake of the business, the product and the fans it was a win-win situation. That is exactly what went on at that time in TNA and I was very proud to be a part of the company at that particular time.

What was the reasoning behind the Team 3D split?

The singles career was something that I needed, Bubba was always into the tag matches and he never really wanted to break up and I understood that because he is more of a tag team guy. I was as well but I wanted to separate that little bit more, we actually separated in 2002 with the Reverend Devon angle in WWE and I remember feeling like I never really got my just due and six months later we were put back together.

It always bothered me that I could not leave this business without having another shot at being a singles competitor and I remember saying it I wanted it so bad but I knew there was more for Bubba and I to accomplish as a tag team. We had to go over to Japan and take over from where the Road Warriors left off, we conquered that, we conquered in making the tag team titles very prestigious in TNA and all of the organisations we were in.

We did our jobs in that sense but now was the time to move on and I was very happy about that because it is something that I have always wanted. I loved teaming with Bubba and creating history but there was a little bit of a selfish side to me that wanted that singles career just a little bit more. Now that I’ve got it and now that it’s here I’m proving those critics that said I couldn’t do it, let me change that we’re proving those critics that said we couldn’t do it, we’re proving them wrong.

Are you enjoying the run as a singles wrestler?

Well, I remember a time back in the day when the business was hot, back when Hogan, Andre, Ric Flair and Dusty Rhodes were in there primes and you weren’t anything in this business until you got to your mid-thirties going into your forties. If you were younger than that you were just considered a young boy and you got your ass kicked and handed to you, but now the business has changed and everybody thinks when your aged thirty you should be the one that’s on top.

Listen I’m old school and if it isn’t broke don’t fix it because when your 34 or 35-years-old you are still learning a lot more, by that time you should be almost polished up but when your that age that is when it all kicks in. I’m in better shape now than I was when I was 25-years-old and my knowledge for the business is better now than it has ever been and I’m very happy about that.

How would you compare your three bosses, Paul Heyman, Vince McMahon and Dixie Carter in terms of their similarities and differences?

Well, you’ve got Doctor Frankenstein, Paul Heyman who was kind of a rebel and definitely a guy that loved to play some mind games but in a good way. He would play mind games with you so you would understand the business and know what this business is about.

Then you’ve got Vince McMahon and he is the grandfather of them all, being with him was really a challenge, my biggest thing was and I tell my students at our school in Orlando, Florida, if you go out and perform in front of Vince McMahon and not have any fear then you are going to make it in this business, because if anybody has an aura about them and can install fear in you by just walking in a room it is Vince.

With TNA it’s kind of like out of all three bosses I’ve got to say Dixie Carter is the best-looking one (laughs) no offense to Vince and Paul but if I’m going to put a ring on anybody’s finger it’s going to be Dixie.

Like I said before whether you love me or hate me, I’m going to get my just dues. Everybody thinks that this whole thing with me having a gripe against the company was all part of the show and it really wasn’t, I legitimately walked away because of a contract dispute.

It just got to the point where I wasn’t going to take any more nonsense and I’ve been making it well known. For those that love me great and for those that think I turned my back or crapped on the company then so be it.

You were recently helping out at Booker T’s All-Star Clinic in Houston, Texas, what did that involve?

I was helping out as much as I possibly could with the younger talent and being able to as they say in this business, pass the torch knowledge. I want to make sure these guys are strong enough and able enough so when the time comes for them to showcase what they have, they will be able to showcase it in the right way.

They didn’t have stuff like this when I was getting into the business so I guess it is a privilege and an honour to do this for these kids and I’m happy to be apart of it. It is something I wish we could have had back when I was growing up but the business was the way it was back then. So be grateful for what we’ve got and what we are able to give after gaining so much from this business.