This is the latest WWE release to focus on The Hardy Boyz, but this is the first to feature their respective singles runs so prominently. The first thing that strikes you when you open the box is that the each disc focuses on one brother’s side of the story; an idea that works (even though some of the topics are repeated) and one I recommend using whenever a tag-team DVD is released. 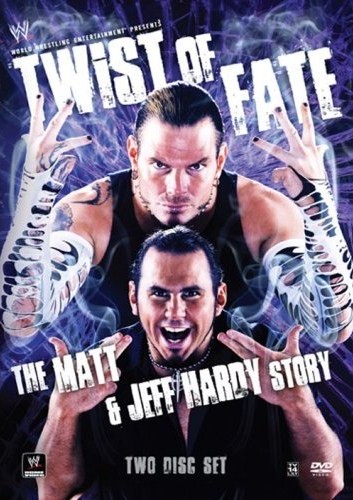 Both discs discuss the death of the boys’ mother and the impact it had on the family before explaining how it was Wrestlemania IV and the WWF Title victory of Randy Savage that made them into bona-fide wrestling fans. Not content with just being fans, the boys (once they were given a trampoline for Christmas) began messing around in the back yard. Some chopped and smoothed trees later and the boys had their own ring (complete with garden hose and wire ropes) to use for their backyard matches.

With a group of friends (including Shannon Moore and Gregory Helms – childhood picture included), Matt Hardy began “promoting” his federation – the TWF (either Trampoline Wrestling Federation or Teens Wrestling Federation). The story goes on to tell us how they acquired their first hard ring and how Matt Hardy began promoting for real with the OMEGA promotion. All they wanted to do was make it to WWE and hold the tag titles once… but it seemed so unlikely at the time.

On Matt’s disc, he tells us how they got their start with WWE (through a wrestler who would bring enhancement talent to work TV tapings) and appeared on TV as jobbers. Watching them being destroyed by the likes of Waylon Mercy, King Kong Bundy, Razor Ramon and Rob Van Dam (among others) is interesting to watch, as it goes to show that you can push someone from complete jobber (being the guys who open the KotR entrance doors, having your name mispelt on-screen – Jeff Harvey? – and carry King Mabel to the ring as examples) to superstar if you try hard enough.

Matt tells us about how they ended up being booked on their own after a while and began being a full-time tag team on WWE television (although they were still jobbing a lot at this point). Talking heads like JBL and Michael Hayes tell us their viewpoint on the initial rise to stardom for the team (with Hayes becoming their manager) and how Team Extreme came to pass.

Lita (more on her later) was a great addition to the team and added another dimension to them, as they did for her. Matt talks us through how he fell in love and how the brothers singles pushes came about. A switch to Smackdown and a feud with Undertaker later and the world was introduced to Mattitude, Mattributes and one of the most inventive TitanTron videos ever.

While all this was great (opening Wrestlemania XIX against Rey Mysterio being a highlight), the fact he was on Smackdown and Lita was on RAW was becoming an issue, so the couple managed to convince Vince McMahon to let him switch shows (back when the brand split meant something and no-one simply switched shows on a whim). The switch was a blessing and a curse as Matt went out with a knee injury and Lita began having an affair with Edge.

This was quite possibly the biggest news story in wrestling since the Survivor Series double-cross; everyone knew about it once Matt vented his spleen online. The elder Hardy was released from his contract and WWE had no choice (after the bile-filled reactions she was getting at live events) to turn Lita heel and pair her with the other half of the betrayal; Edge.

He also talk about his eventual return and how hard it was to work with Edge, but how it was inevitable they had to deal with that on-screen first and then move on to other issues. The worked-shoot return was awesome, but they wisely flash past the bafflingly-booked Summerslam match, as well as the much better Streetfight, before discussing the Cage Match to end the feud (I know they had a MitB match where the loser leaves RAW, but that was more about getting Matt Hardy on Smackdown than the actual feud itself). There is also some brief mentions about how the shots being laid in weren’t as worked as they maybe should have been.

The switch to the blue brand was the best thing that could’ve happened to Matt, as he had great match after great match and really upped his game. His storyline with MVP was one of the best angles of 2007 (until the injury) and really elevated both men to the top of the midcard ranks.

Matt Hardy has come back from his injury and is now the WWE US Champion. As the last chapter of the disc says: “The Future Is Bright” for Matt Hardy and, like some of the talking heads say, it’s not beyond impossible that we have World Champion Matt Hardy v WWE Champion Jeff Hardy in the near future.

The second disc is all about Jeff Hardy and focuses a lot more on the outside interests the younger brother has. His poetry and song writing are mentioned in detail, as is his motocross track, sculpting and other aspects that make Jeff unique. There is very little on the wrestling side of things (apart from his IC win over Triple H and his awesome ladder match against The Undertaker) that isn’t on Matt’s disc.

Jeff has probably changed the most out of the two Hardys in regards to his initial appearance in the WWF to the persona he has today. We see how his art influences his life (including an awesome mural he painted) and he tells us why he painted his body the way he does.

His release is discussed, including Jeff talking about WWE wanting him to go to rehab and the reasons why he chose not to. His TNA run also gets a mention, with Jeff talking about the lighter schedule associated with the promotion.

From there, we hear about how the feelers were put out for his return (including another discussion about rehab and the tests he had to take) and how the reaction his re-emergence meant a lot, especially as WWE promoted his return weeks in advance.

We get to see the evolution of Jeff Hardy through a quick montage (including comments from Gregory Helms, etc) and hear about how great it was to team up and win the tag titles one more time with Matt before the future of Jeff Hardy and why you should follow your dreams closes the main feature and leaves us on a high.

Most of the extras are matches that range from good to awesome. Choice picks are Edge v Matt in the cage, Jeff v Triple H (both of them), Matt v Mr. Kennedy, The Hardyz v The Dudleyz and Jeff v both Umaga and Johnny Nitro inside steel cages.

The tables match against The Dudleyz is a classic (with some brutal chairshots and table spots) and the two Triple H v Jeff matches are curious to watch together to see how both men have come in the six-and-a-half years between them (in the IC match, Jeff was seen as far out of his depth, yet in the Armageddon contest, there was no such feeling).

The OMEGA tag match is pretty good (with some really sweet spots) and shows those watching that both Hardys and Gregory Helms were destined for better things (Mike Maverick, Helms’ partner, is decent, but the other three were the standouts). The commentary is pretty funny though (“That was some of that Ring of Honor bullsh*t” is a standout comment). Considering this bout was shot with only one camera, it puts a lot of more high-production contests to shame.

The non-match extras are ok (including an Easter Egg of Matt, Jeff, Shannon and Helms sitting on the sofa drinking beer), but they aren’t “must-see” inclusions. One morbid note is that the dog Jeff is holding during the Hardy Dogs extra is the dog that died when his house went on fire earlier this year.

One thing to pick up from the High Voltage promo is that Matt Hardy was a big guy in his early days and probably stood out in the indies because of it.

This two-disc release is good, but not as good as the recent Shawn Michaels DVD. It does follow the HBK release in one great aspect though; having the matches as extras and letting the main feature (or features in this case) focus on the people behind the personae.

It really is a testament to The Hardys that both were released from the WWE, yet came back and improved on their previous runs. The documentary obviously covers similar ground when discussing the brothers’ early days, but the producers wisely focus on Jeff’s outside interests and thus make both discs vastly different overall.

The matches on the extras are, as I said earlier, really good, with the OMEGA tag match being the big surprise. The action is really, really good and the commentary is golden (it seems that Matt, Jeff, Shannon and Helms have been at the booze beforehand), with some funny comments about “inside terms”, Mike Maverick and stealing moves.

This is a highly recommended DVD that does what it says on the cover. There is a lot missed out, especially of the TLC era (understandable to a degree with 50% of the matches working in high-profile positions for TNA), but the overall content is worthy of purchase.

A great story, with great matches is all that you can ask from a wrestling profile DVD; this collection has both, making it good value for money.