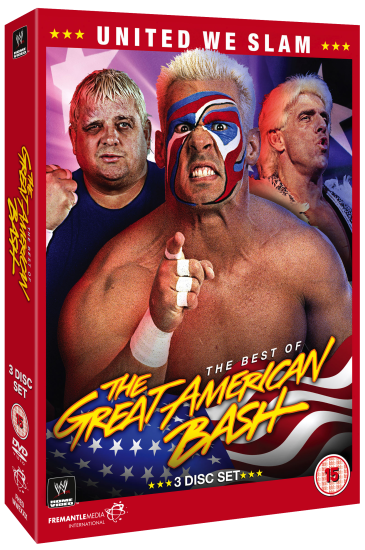 Whether it’s coincidence or whether it was part of a ploy to convince Sting to finally sign a contract with WWE, the promotion has upped their output of WCW retrospectives in the last couple of years.

We had The Rise & Fall of WCW, two Best of Nitros, a look at Starrcade’s legacy, the history of The Clash, a War Games collection, the best PPV matches and career profiles on Goldberg and The nWo. With the recent turn of events, a Sting profile release can’t be too far in the future.

Before that though we have a look at another WCW tradition; The Great American Bash.

Originally a supershow, then ,for a brief period, an actual touring attraction (there were THIRTEEN events under the GAB banner in 1986), before settling down to the once-per-year PPV event we know and love, The Great American Bash has a history of brutal matches, star-making turns and top quality wrestling.

This set wisely avoids the WWE reboot of the name that took place from 2004-2009 and sticks to the NWA and WCW eras for the entirety of the set.

Of course, the further back in time we go, the worse the audio and visual quality is going to be, but in the places where it does seem to be a bit rough round the edges, it actually adds to the grittiness of the action going on inside the ring.

The only match I would consider bad is Nash v Jarrett and for a set containing 19 matches, that’s a good run.

There is a great mix from a lot of different styles across the various NWA and WCW eras, with blood feuds, wild brawls, cruiserweight magic, tag-team action and everything inbetween getting at least one outing over the three discs.

WCW gets a lot of stick for it’s later years (and mostly it is deserved), but it has a great history loaded with great wrestlers and it’s fantastic that newer fans are getting a chance to be introduced to it with these collections.

Guys like Rick Rude, Sting, Vader, in-his-prime Ric Flair, the pre-Stone Cold version of Steve Austin, Nikiti Koloff, Dusty Rhodes, Terry Funk, Ole & Arn Anderson, NWA-era Road Warriors and the young Great Muta would probably be lost in the mists of time if it wasn’t for WWE releasing these collections and we should be thankful for that.

The fans who missed out (and all aspiring wrestlers) should consume as much of the old footage as they can as the territory system means this is the only real way to learn from that period of time. Study what worked, what didn’t and get an understanding that when you do the move and, ultimately why you did the move will always be more important than the move itself.

Long may WWE mine their video library and provide wrestling fans with the history lessons they deserve.