JJ Dillon was a professional wrestler who won numerous Championships during his career in the ring. However, Dillon will be best remembered as the manager of Ric Flair, Tully Blanchard, Arn and Ole Anderson, better known collectively as The Four Horsemen, one of the greatest stable in the history of professional wrestling.

The 69-year-old was this year inducted into the WWE Hall of Fame along with the other members of the original Four Horsemen.

We caught up with JJ Dillon to talk about being inducted into the Hall of Fame, being a member of the Four Horsemen and what it was like limousine ridin and jet flyin with Ric Flair plus the lack of managers in wrestling today. 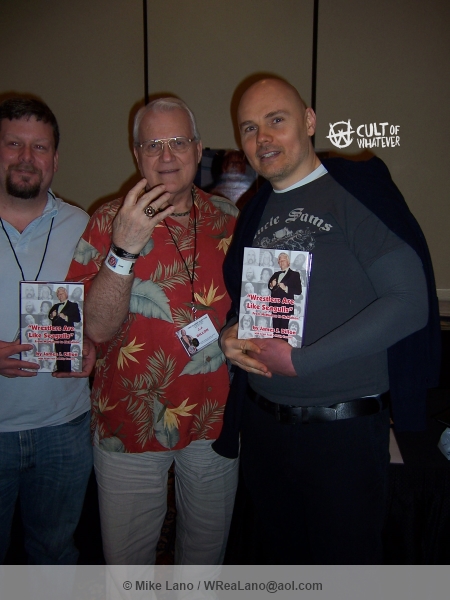 What was it like being inducted into the WWE Hall of Fame as part of the Four Horsemen?

It was a great honour, the arena in Miami was sold out and to be up on the stage and looking down in front of you are the McMahon family, John Cena, CM Punk, Rey Mysterio, and Pat Patterson behind them are other legends, the Roddy Piper’s of the world, Harley Race and Dory Funk Jr, then our families are all there as well. You then look up and can see and hear a sea of people, 15,000 plus giving us a standing ovation, I’ve had some goosebumps moments throughout my career but I don’t think anything will ever top the Hall of Fame.

The next day to actually go to WrestleMania and in front of 78,000 plus fans, in the middle of the show after a great match between The Undertaker and Triple H, to get an intro and a round of applause from all those people it was a different high but almost as exciting but in a different way.

How did it all begin for you?

I just had a dream to be a wrestler and to get into the business and that is all I was focussed on when I began because I was a fan. I have often said I was never the biggest, never the best, never the most talented but nobody wanted it more than I did and was willing to work as hard as I did. I persevered and like everything, there were hurdles along the way, a lot of it is pure luck, being in the right place at the right time and getting help from people.

When I began wrestling full-time it wasn’t long before my 29th birthday and I was very appreciative of the opportunity and had tremendous respect for the business and the people in it. In those days there weren’t wrestling schools and a lot of the old-timers weren’t really helpful to guys looking to breakthrough in the business because they saw it as someone coming in to take their place.

I got a lot of help because they saw I had a good attitude and was respectful and kept my mouth shut. I say I had a storybook career but never thought about the Hall of Fame but that is like the cherry on top of my Ice Cream Sunday.

Who were some of the wrestlers that inspired you to get into the business?

That would have been in the fifties and I grew up in the North East which was the largest area in the country for wrestling promotions. Back then we never had cable television or the internet; wrestling was only on TV one night a week, live on a Thursday night.

It was the era of Argentina Rocca, Karl Von Hess, Haystacks Calhoun, Bobo Brazil, Brute Bernard, Chief Big Heart, and then a bit later Eddie Graham, the original Sheik, just the names read like the who’s who of legends in our business and the one guy that really caught my eye when he came in was Johnny Valentine and I actually started up a fan club for him.

How did it all begin for the Four Horsemen?

It was a spontaneous thing, I would like to say that someone came up with this brilliant concept and then we went out and did it but as I said in my Hall of Fame speech at that particular time Ric, Arn, Ole, Tully and myself were all working in Crockett Promotions and I was only managing Tully at the time. Ric Flair was the Heavyweight Champion, Ole and Arn were the World Tag Team Champions, and Tully was the National Champion.

Basically, those guys held all the championships and we were doing programming for TV every week which was going out nationally on TBS and there was a spare slot, and someone said to us, you guys have all the belts, why don’t you all go out there and you can talk about what you’re going to do the following week etc.

The guys all went out to the ring and I was there because I was managing Tully. During the course of the interview, Arn said, “You people at home watching on television take a good look at your screens because never have so few reeked so much havoc on everyone else, you’d have to go back in history to the Four Horsemen of the Apocalypse”. And he held up four fingers.

The fans picked up on it and whenever any of us went out there they were yelling ‘four horsemen’ and holding up the four fingers and it just grew from there. We had no idea when it started it would become as big as it did or it would last as long as it did.

What have you made of the other reincarnations of the Four Horsemen stable?

I spent so long in the business that I knew with something of the level of success we had, it was typical for wrestling promoters to ride it like a horse until it drops. Like most things that are successful, it has been reincarnated in one form or another.

Nothing however has been as good as what the original was, you can imitate but you can duplicate. 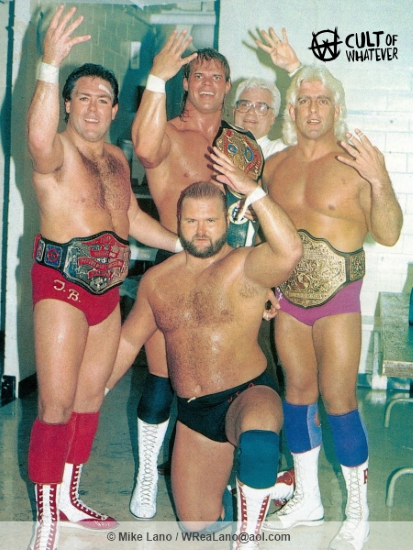 Ric Flair would often refer to the limousine ridin, jet flyin and riding space mountain, what were those days with the Nature Boy like?

Ric has been in the business for nearly 40-years and he is still the same guy, he’s joked about being married four times and his wife asking when are you ever going to grow up and his reply was ‘I’ve never really given it any serious thought’.

He just enjoys life, Ric was always a fun guy to be around and maybe he set the tone for the rest of us and we just joined in and had a great time together.