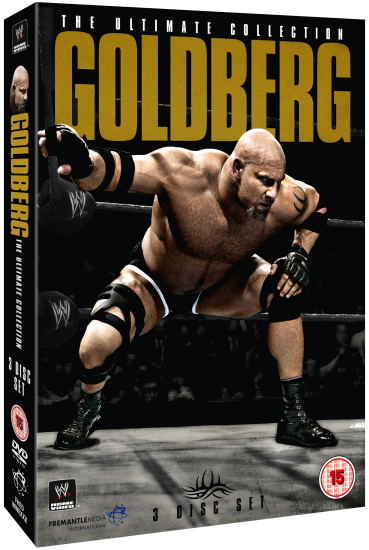 Bill Goldberg. Outside of The Giant (now The Big Show in WWE), the one true superstar that WCW created and possibly the one WCW wrestler that is as much of an enigma now as he was then.

In honour of the master of the Spear and the Jackhammer and the type of match he is most famous for, I’m going to write this review and make sure it’s a sub-3min read.

Basically what you have here is three discs filled with matches from the very first of Bill Goldberg’s onscreen career to the very last of his onscreen career. There is literally nothing else featured in this set apart from in-ring competition.

There are no sit-down interviews, (surprisingly) no talking-heads of any kind, no back-story to most of the matches and seemingly no new input from the man himself. It’s strange, but also weirdly apt for a wrestler who built his reputation on no-frills, get-in-beat-up-get-out matches to have a DVD that is only no-frills, get-in-beat-up-get-out matches.

This is a comprehesive a look at Goldberg’s in-ring career from his debut against Hugh Morrus (where he is very clumsy, but just has an aura about him that makes you want to see him again) to his exit from WWE at WrestleMania XX against Brock Lesnar in what should have been a brutal power-match only for external issues to derail it somewhat.

In between there are classics including the match against Raven, his bouts against DDP, Sting, Sid (especially the brutally violent “I Quit” Match), the ultra-heated double-bill against Scott Hall and Hollywood Hogan, his WWE debut against The Rock and the heated affairs against Triple H.

Unfortunately, as there is literally nothing else to the set, tedium sets in (as it does in any compilation where the same guy is in match after match) and you may have to watch this in numerous sittings. Also in the negative column are some of the match choices. Dross like the bouts against Barbarian and Mongo McMichael could have been left out, while we didn’t really need two Nash matches and two Triple H bouts (three if you include the Elimination Chamber).

In their place, you could have had any of his relatively competitive bouts against Perry Saturn, Bam Bam Bigelow, Bret Hart and / or Shawn Michaels, so a bit of a missed opportunity there. I know the latter three are on the Blu-Ray extras, but not everyone will shell out for that edition.

That said, some of the matches are good and a select few are excellent, so there are good points too, just not enough to push it into must-buy territory.