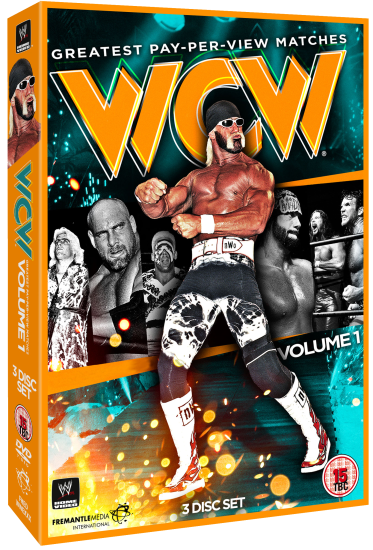 WCW has not had the depth of post-demise releases that the seemingly more beloved ECW, which is a shame when you consider the wealth of archive footage WWE has at its disposal. Even when there has been similar content (both promotions had a “Rise and Fall” retrospective), WCW’s seemed to be a bit more bitter and acidic that the Paul Heyman-led counterpart.

In the last 18 months though, WWE seems to be getting on the WCW bandwagon with the War Games compilation and the two Best of Nitro sets showcasing the best the Atlanta-based group had to offer on TV. The logical progression from there is to turn the focus to the best WCW produced on PPV and this three-disc set, hosted by Booker T, is the perfect way to get the ball rolling.

As this is listed as “Volume 1”, there will of course be some matches that belong on a set chronicling WCW’s best PPV outings, but will need to be kept for future releases. That being said, there really is a great history lesson across the three discs as we see the promotion evolve across various eras (the NWA era in the 80s, the rise of Sting, etc in the 90s, the Outsiders / nWo run) and then devolve once WCW ran out of ideas and trusted Vince Russo to steer the ship, only for him to steer them from one disaster to another until the company failed entirely and was bought by Vince McMahon.

There will be a lot of wrestlers on here that WWE fans will know about, but will have never seen in their prime. For those fans, they are in for a treat. Not only that, some of the early bouts are commented on by Jim Ross who even back then made almost everything seem like the most important event in wrestling history.

One era ends and the creative and commercial peak for modern pro-wrestling was about to get under way as The Outsiders (Kevin Nash & Scott Hall) – recent invaders from WWE – took on WCW’s heroic saviours in the three-man team of Lex Luger, Sting and Randy Savage (all in Sting’s surfer-style face-paint) to repel the invaders… and their promised, but hitherto unseen, third man. Everyone should know by now how this story ends, but if you haven’t actually seen it, you really owe it to yourself to see the Hulk Hogan heel turn and try to get a feel for the genuine shock inside the arena.

The old WCW was dead and the fabled Monday Night Wars were on. It was also around this point that WCW really began to highlight the Cruiserweight Division and the smaller guys took advantage of the opportunity. Guys like Dean |Malenko, Rey Mysterio, Juventud Guerrera, Chris Jericho and Eddie Guerrero among a host of other imports from Mexico and Japan revolutionised the idea of what a professional wrestler could be.

Alongside that, there were great feuds like DDP v Randy Savage, the rise of Goldberg, the rise of Booker T, the evolution of Chris Jericho into what would become Y2J and a fantastic action across the board as WCW reached its peak of greatness.

The Goldberg v DDP match is interesting because it was one of the few non-squashes that he worked during his undefeated streak. It’s also interesting to note that it didn’t actually air on the PPV itself because WCW neglected to tell the cable companies that the show would run long (3.5hrs as opposed to the standard 3hrs). Due to this, most fans didn’t get to see the bout and it instead aired on Nitro in an act of appeasement.

While WCW started to falter after the nWo had ran its course (despite repeated failed rehashes), there were still some gems to be found and nowhere is this more apparent that the 3-Way Ladder Match between The Jung Dragons, 3 Count and Jamie Knoble / Evan Karagias.

Even though it was obviously capitalising on the three-way tag-team feud between Edge & Christian, The Dudleys and The Hardys, the three teams in this bout went above and beyond to make their own mark and it’s still brought up whenever people talk about the top matches in WCW’s dying days.

All in all, this is a great look at WCW’s pay-per-view past and really whets the appetite for future volumes. Not all the matches are A+, but most are. The first disc is relatively priceless in the quality on show from WCW’s late-80s heyday, while discs 2 and 3 also have some wonderful in-ring action.

In addition, the Hogan heel-turn is still mesmerising, but the lack of “Crow”era Sting is surprising. Of course, there is always Volume 2 for that.