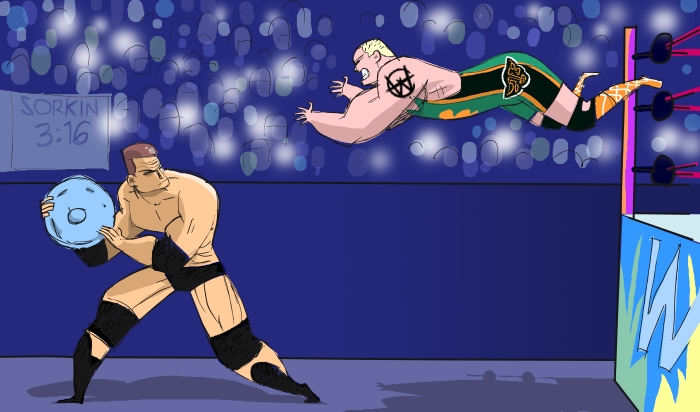 Lillian Garcia: “Our opening WrestleMania match is a Belfast Brawl.”

From the big outdoor arena setting to the ‘We Wish You Were Here‘ tagline, the twenty-fourth WrestleMania had a beach theme more typical of SummerSlam (or WCW’s Bash at the Beach) than your standard WrestleMania.

Ominously, the first shot of the show was a camera lens covered in rain. What’s it going to be like this year in New Jersey?

There is something funny about having a Belfast Brawl (another WrestleMania first) surrounded by palm trees in Miami, Florida as WWE kicked off the biggest show of 2008 with what promised to be a hard-hitting grudge match from a feud based off JBL’s abuse of Hornswoggle on Raw.

A month prior to this in a Steel Cage Match between Vince McMahon and his “illegitimate son” (as they liked to call him) Hornswoggle, the Chairman attempted to teach the little fella some ‘tough love’. After McMahon left the ring, his cornerman JBL inflicted an uncomfortable beating on the leprechaun topped off with a release Fall-away slam into the wall of the cage as a helpless Finlay pleaded with the self-made millionaire to stop. Even Vince felt this was a bit too far and demanded a “public apology” from Bradshaw.

JBL revealed Hornswoggle was in fact Finlay’s son. On the Saint Patrick’s Day episode of Raw (in which McMahon celebrated the occasion by attempting to retire Ric Flair in a streetfight) JBL destroyed “the second toughest Irishman in WWE” Colin Delaney but this match was going to be a whole different kettle of fish.

If you are wondering what the rules are, a Belfast Brawl is basically a streetfight.

Jerry Lawler: “Well, I’ve never actually been to Belfast but I’ve seen a few brawls in my day.”

Talk about the understatement of the Century. Of course, Lawler is in fact, one of the greatest brawlers of all time in his own right.

Pre-match, JBL rides out in the back of his limo. He isn’t the first guy who used a car for his entrance to appear on this list and he won’t be the last.

Fit walks out meaning business, shillelagh in hand. Suddenly the music changes to a more jovial tune and out comes Hornswoggle. He gets a nice pop for his comeback following three weeks.

Before Finlay can even enter the ring, Bradshaw boots him in the head and stomps away on the apron.

All this is happening before the opening bell. They fight outside where the Irishman reverses an Irish whip into the steel ring steps.

Dumping Layfield back in the ring, the bell finally sounds and we are “officially” underway as Finlay hits a vertical splash, stiff-looking rights and lefts and heads outside under the ring to look for plunder. Taking advantage of the lack of rules he throws a load of standard Hardcore match weapons (a metal dustbin or ‘trash can’ for my North American readers, kendo sticks, etc.) into the ring. This strategy backfires because when Finlay tries to reenter the ring Bradders slings the trash can at him, cracking the top of his head.

At this point, Lawler suggests that Finlay needed to find a helmet when he was under there. I suppose ‘Sir’ Lanny Poffo wasn’t working this card.

The self-professed ‘Wrestling God’ takes control with hard ‘trash can lid’ and ‘cookie sheet’ shots to the head and a super-stiff short-clothesline, then goes outside and to drag the steps into the ring.

“One has to go into the mind of the wealthy and the wicked” claims Jim Ross as ‘Wall Street Warrior’ sets up a piledriver on the steps.

This isn’t normally a spot you would see in modern-day WWE but considering Shawn Michaels delivered that same move to John Cena on the last match of the previous WrestleMania, there is always the small chance it will hit.

It doesn’t, of course. Finaly backdrops him off, hits a nasty running boot to the mush, gets revenge from earlier with two shots to the head from the cookie sheets, then in a cool spot holds the metal sheet up to and punches it into the ‘Media Mogul’s’ face for the first near-fall of the match.

Jerry Lawler: “It’s been said many times that Finlay loves to fight; he oughta be ecstatic here.”

JBL comes back with TheBigBoot out of nowhere, stomps on Finlay’s hand and goes to work with big right hands in the corner. Moving in for the kill ‘The Wrestling God’ grabs a shillelagh but Hornswoggle comes in from out of nowhere, providing the necessary distraction by whacking JBL in the back with a kendo stick to the loudest pop of the night so far.

It works as the distraction not only leaves a massive mark on the back of the ‘Wall Street  Warrior’ but causes the financial guru to drop the shillelagh allowing ‘The Fighting Irishman’ to pick it up and wallop JBL with it. Bradshaw sells this as a KO blow, rolling outside like he’s Shawn Michaels wrestling Tito Santana at WrestleMania VII.

The rules are that pinfalls only count in the ring (unlike in your standard Hardcore Rules Match) so Finlay has to pick up the dead weight and muscle him back in.

Jim Ross: “Finlay came to remove a piece of JBL’s soul, if JBL has one.”

Finlay sets up a table in the corner then drills JBL with a brutal Clothesline straight from the bowels of Hell itself (Jerry Lawler: “Hey, that looked like one of JBL’s clotheslines.“).

‘Fit’ grabs the steps but JBL retreats outside and slaps Hornswoggle in the face. Nasty. This sends Finlay bonkers as he follows Bradshaw out and beats the hell out of him at ringside.

This sets up one of the more memorable high-spots of a WrestleMania opening match as Finlay took a nasty shot to the head attempting a plancha suicida that JBL countered with a trash can lid. This not only generates a massive pop but proves to be the turning point of the match.

JBL rolls him back in for a close nearfall, then walks over and casually picks up a dustbin which he violently throws at poor Hornswoggle. Looking cool and in control, Layfield picks up another one, bashes Finlay in the heat with it and signals for the Clothesline From Hell.

In a neat spot, Finlay blocks it with the trash can JBL had just dropped. He follows it up with a series of typically hard trash can lid shots to the skull, a rolling fireman’s carry (fellow World of Sport legend Kendo Nagasaki’s famous Kamikaze Krunch) and tosses ‘The Wrestling God’ through a table which had been waiting there the whole match for a close-near fall.

Jim Ross: “The table set for JBL and maybe that was his Last Supper.”

Realising it will take something a bit more, Finlay grabs the ring steps but JBL is a step ahead, walloping Finlay in the knee with a kendo stick as Finlay attempted to nail him with them and quickly following up with a stiff Clothesline From Hell for the win.

Jim Ross: “Ya like the high impact? One has to love this!”

This match might seem a little high to some. If it does, I’d recommend you rewatch it.

Kicking the show off with a hate-filled brawl and tearing the house down with the Hornswoggle interaction, I have no problem calling this a great opener.

This was something of a surprise pick for the first match of the night. At the time I was expecting Money in the Bank to kick off the show (as it had the previous year and would the one after) but this match actually worked very well in the spot it was allocated.

At just 8:37 they made the most of the time they were given, delivering exactly the kind of brutal action you would expect from these two in this environment.

It featured a slightly surprising result since I was expecting the babyface to get his revenge here, at least in the short-term, but this actually turned out to be a one PPV match feud.

A year beforehand, JBL was providing insightful colour commentary. His comeback feud with Chris Jericho was hit-and-miss and treated with mixed reviews. This match was proof positive he could still ‘go’ and the result served to set up JBL for runs against Cena, the World Championship (by that point held by Punk), and Batista.

For a career heel, Finlay was able to adapt perfectly as a surprisingly sympathetic blue eye. ‘The Belfast Bruiser’ would pull a HBK and appear in three WrestleMania openers in consecutive years (XXIII-XXV) showing the faith WWE (correctly) had in his abilities.

Short, stiff and violent. This match proved you don’t need blood to have an entertaining brawl. Some of ‘standard’ cookie sheet and trash can lid shots were just brutal to watch.

Yet for all the weapon shots, a lot of the biggest impact came from old fashioned strikes – punches, boots and clotheslines. Ultimately it was one of the most basic and traditional wrestling moves in the book that ended it all.

Good Ol’ JR put it best post-match when he noted, “It was a bar fight but damn sure no Happy Hour.”