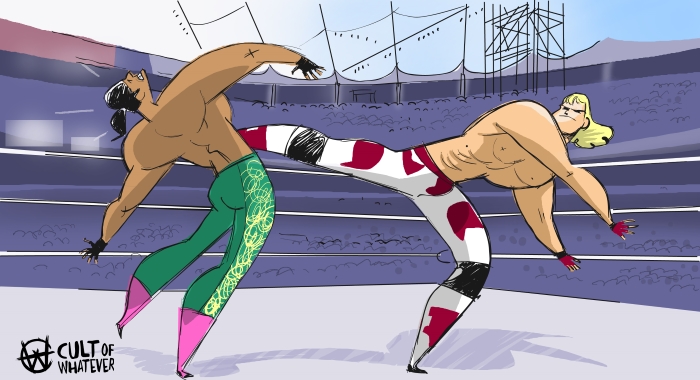 There wasn’t any particular grudge between these two. They were both good workers, one of whom had had his day in the sun with two  Intercontinental and Tag Team Title (alongside ‘Polish Power’ Ivan Putski and Rick Martel) reigns and was used to elevate ‘The Next Big Thing’, the other of whom was en route to establishing himself as ‘Mister WrestleMania’.

In late ’91 WWF stalwart Santana had undergone a repackaging, returning to Mexico and training in the arts of Bull Fighting to become El Matador. Michaels had undergone a repackaging of his own, having recently turned heel on longtime tag team partner Marty Jannetty. Since that fateful Barber Shop incident, the former Rocker had been given the managerial services of ‘Sensational’ Sherri, a new nickname (‘The Boy Toy’), leather outfit and finisher (the ‘Teardrop Suplex’… although no one actually called it that).

Looking at this as a WrestleMania opener they make the most of their surroundings and emphasise the ‘WrestleMania’ part of it with a celebrity tie-in.

Bobby Heenan: “Boy can Tito’s sister belt one out!”

Gorilla Monsoon: “Will you stop!”

Gorilla Monsoon: “It is not.”

And here comes Tito, complete with bullfighter gear and flag. They must have National Anthem set-up for that joke because as McEntire leaves and Matador enters they meet in the aisle and he bows to her “He’s acknowledged his sister” (Bobby Heenan).

Interestingly he is announced as “’El Matador’ Tito Santana” after a period where they seemed to be trying to erase his better-known ring name.

Out comes the not-quite-yet ‘Hearbreak Kid’ to the strains of his new theme tune ‘Sexy Boy’. Sherri’s version of the song was so much better. Michaels ‘I’m Too Sexy For This World’ on back of jacket. Watching this match now, in 2013, I wasn’t really expecting a reference to Right Said Fred.

I mentioned last year that due to my birthday falling the day after this show I had a WrestleMania VIII party for my birthday, inviting a bunch of friends over and watching it on tape the day after the show after a hard day trying to avoid WrestleMania spoilers at school (this year I’m celebrating my birthday the day before, so at least I don’t have to risk someone spoiling it).

Watching this was a recent experience for me. At the time we’d dropped the Movie channels/switched to a Sky package that didn’t include Sky Movies. This meant I had to get a friend of my mum’s (who’s two daughters followed wrestling) to record the 1992 Royal Rumble and WrestleMania VIII. Fortunately by the time SummerSlam ’92 (which I attended in person) rolled around it was shown on the new Sky Sports.

The lady in question had recorded the wrong channel at the beginning so we missed Reba McEntire singing and the start of the Michaels/Matador match and instead got a Liberal Democrats party message.

I believe my copy cut in halfway through where Heenan said “Did Sanatana punch Sherri? You said he hit him right in his kisser”…

Bobby Heenan: “That’ my pin-up girl.”

Gorilla Monsoon: “I think you should see your oculist”

Bobby Heenan: “There’s nothing wrong with my feet.”

Sherri brought a lot to Michaels in terms of establishing him having previously been associated with top guys Savage and DiBiase. I like that she doesn’t interfere the first chance she gets but just stands near Tito to show she could do.

The big stadium setting makes this looks like a contemporary WrestleMania. Unfortunately, due to traffic the dome is only 2/3 full for this. “Too bad all of them are going to miss this great match” (Gorilla Monsoon). Too bad indeed.

Shawn Michaels kicking off WrestleMania for the second year in a row was a good move, especially against someone as consistent as Tito Santana – the man who was involved in the first match at the very first WrestleMania. At this point there was no doubt who would win most of Tito’s matches (his two previous WrestleMania appearances were to put over The Barbarian and The Mountie) but he’d been repackaged El Matador and given a bit of a push in the form of some TV wins over undercard heels.

Michaels was still establishing his own identity at this point following the split from the Rockers and one of the things I really liked was the way that once he turned heel and went solo he cut out 99% of the high-flying moves he used to do and instead concentrated on a more mat-based style, combined with lots of bumping.

He was in fact too cocky at the start, shoving Tito in chest and ends up getting shoved back. Micheals tries punch but Tito blocks and punches him in face for it. Tito slaps on headlock, gets near-fall with a cross-body, shoves Michaels again (revenge spot) and slows the pace down with lengthy headlock. Criss-cross spot ends with Tito clotheslining Michaels out of the ring for a nice bump.

Tito drags him back into ring with headlock. Michaels eventually fights by forcing rope break in the corner and hitting Brock-style shoulders into corners. HBK had cool punches early and the Bionic elbow. Santana punches resulting in another nice bump by Michaels and goes back to headlock for bulk of the match. They tease various escapes and pinfalls out of it.

Nice use of the headlock here as Tito works it really well as a move to try and slow Michaels down. Basically, the first six minutes of a ten-minute match are built around it, but it still seems interesting. It also leads to this classic exchange:

Bobby Heenan: “I’ve pinned a few people with it.”

Gorilla Monsoon: “Where? In your dreams?”

Bobby Heenan: “I can beat ya… I can beat a man a million different ways. I had a guy give up one time during instructions.”

Tito must have agreed. He wanted to like that because at once he lets go and goes for the pin with a small package before going right back to the headlock.

The story is that Tito is bigger, stronger, more experienced and hits harder than Michaels. They stick to the WWF ‘Heel in Peril’ structure all bumping weak heel at this point. Not like that’s necessarily a bad thing; it’s better than being an all-conquering cool heel, I suppose. I would prefer a bit of balance.

‘The Boy Toy’ eventually shoves Santana into the ropes, then catches him running and sends the Matador bumping outside. Finally a heel control bit. Sherri teases but does not interfere.

Michaels in control hits a nice backbreaker and then locks in a chinlock of his own. Keeps control with it for his longest section of the match. Of course this is designed to set up Santana’s comeback – elbows out but runs into the superkick. Michaels superkick looked very good here and it leads us to cool finishing section, as Michaels goes for Teardrop suplex (should gone for the pin after the superkick as Sherri frantically screams “Pin him! Pin him!“) but Tito blocks it with a big right hand.

‘El Matador’ Tito follows up with punches, a flying forearm that sends Michaels rolling to the floor (a clever way to protect Santana’s finisher by still letting him do it to pop the crowd, but without having the heel kick out). Tito follows him out with punches, throws him back in leading to a sequence where Michaels bumps around like a pinball off a big flurry of offense that sees Santana hit a slingshot shoulder-block back inside, Million Dollar knee-lift, inverted atomic drop and signals for El Paso Del Muerte (Tito’s other finish). He hits it and Michaels rolls to the apron again, setting up our finish as Michaels grabs hold of the top rope as Santana attempts to bodyslam into the ring resulting in ‘The Sexy Boy’ falling on top for the win.

Good opener and a sign of things to come with HBK involved in his first solo match at WrestleMania and has a good bout in the process.

At times it feels a bit like a House Show match. Worked at a deliberate methodical pace, with very little wasted motion the match did it’s job. Not as much as it could have been, it served its purpose. For a Shawn Michaels match there was very little in the way of highspots (markedly different from year before… and the year that followed). Seemed like they were saving up for a proper feud (which never happened). Contrary to the complaints that would follow him in the latter part of that decade, if anything, Michaels was too generous in those early singles days! He was the prototypical all bumping WWF-style heel with very little offense. Santana is solid as always working a match he has done a thousand times before and you can see he is actually the one dictating the pace throughout.

There was more action in those last few minutes than the whole of the match before. This was an important win because it showed Michaels could beat a ‘name’ babyface not by DQ or count-out but pin and this and TV win over Snuka.

Whilst the ‘New Generation’ campaign wouldn’t ‘officially’ begin until a couple of years later this was the start of the time when the steroid scandals forced the WWF to switch the emphasis from muscle-bound to a more wrestling orientated approach symbolized by pushing guys like Bret Hart and Shawn Michaels.

That the card started with Tito Santana putting over the WWF’s newest singles hope in Shawn Michaels is no coincidence and it continued from there as The Undertaker, Bret Hart and even Tatanka were elevated through receiving victories over more established names.

Pre-match Gorilla and ‘The Brain’ acknowledged Michaels had challenged the winner of the Intercontinental match. This was to build Shawn for the Intercontinental belt which he would challenge Bret Hart for over the Spring/Summer before finally winning from Davey Boy Smith on the 14th November edition of Saturday Night’s Main Event.

This was Michaels big singles breakout performance at “Granddaddy of ’em All”.