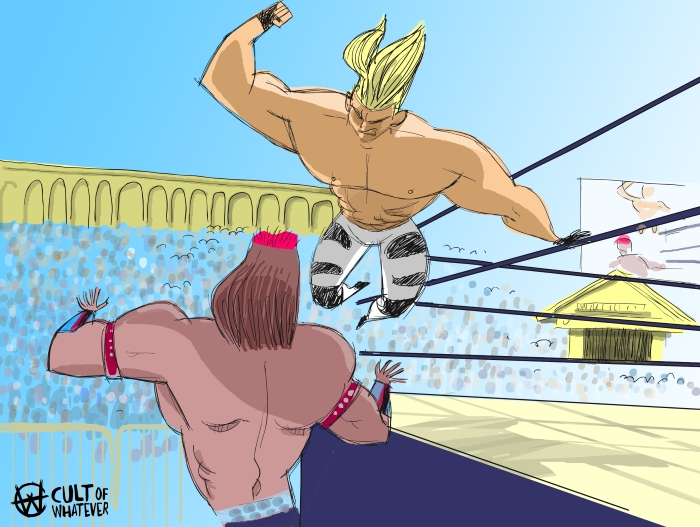 Randy Savage: “WrestleMania IX – have a good time. The Roman Coliseum: the grapes were great and the chicks were cool. Oooh Yeah!”

WrestleMania IX is a card I go back and forth on. For reasons unknown, I quite like events that strongly divide opinion and this card is the ultimate example of ‘Love it or hate it’.

Right now I like the event. Anyone who knows me knows I love the whole gladiator theme (that was recycled at Royal Rumble 2006, which looked great as well).

Some of the build-up to WrestleMania IX was pretty solid, the Intercontinental Title Match included. Especially considering it was not the original plan.

One of the problems with The Rockers split was Jannetty getting temporarily “wished the best in his future endeavors” shortly thereafter following a fight with an off duty police officer. Jannetty returned with a bang in October looking for revenge. Michaels met his former partner at the Royal Rumble, retaining after interference from ‘The Heartbreak Kid’s’ ex Sherri backfired and the feud was set to continue until WrestleMania. Unfortunately, Jannetty was long gone by the time Caesar’s Palace rolled around. After Jannetty’s latest release Shawn Michaels got the best out of the popular Tatanka who was at his most over at this point working Tatanka an ‘Undefeated Streak’ gimmick and they had good TV matches around about this time including The Native American scoring a pinfall win over the star on the rise Michaels in a non-title match on Superstars via a Papoose to Go (Samoan Drop) after ducking the superkick and in a six-man tag on Raw when he The Nasty Boys beat Michaels and The Beverly Brothers when ‘The Native American Hero’ reversed the Teardrop suplex into a sunset flip.

Tatanka had been built-up a lot over the last year and seemed to be heading towards Intercontinental gold. He was over. Michaels had really come into his own after winning the Intercontinental Title from Davey Boy Smith on Saturday Night’s Main Event.

Adding further intrigue to the match, Michaels had an injured shoulder having just come back from surgery which was acknowledged in the storyline.

This was hyped really strongly as Undefeated Streak vs Belt. Something had to give and a screwy finish seemed out of the question.

Bobby Heenan: “That is Luna Vachon. She comes from the greatest wrestling family in the history.”

Pre-match Luna Vachon made her surprise debut in Michaels’ corner, creeping out a few steps behind him, almost so you wouldn’t see there was anyone with him at first.

‘Miss Ontario’ (as Heenan calls her; “Usually no one wins the contest“) would make her presence felt before the match was over.

At the time people moaned about the Intercontinental Belt being in this spot, but it represented a change in how wrestling cards would be worked. It is worth remembering that at this point WWF still only had three titles, all of which were defended on the night (the others forming a Double Main Event where Bret Hart defended the WWF Title against Yokozuna.

Fun Fact: This was the first WrestleMania where the Royal Rumble winner was automatically granted a WWF Title shot at WrestleMania.

Tatanka runs out with an actual tomahawk, doing a war dance. Sherri walks out after Tatanka in a Native American outfit with feathers.

Michaels was so confident at this point (in everything he did) he makes matches, opponents and gimmicks seem important – from taking off his leather chaps to jawing with the crowd.

The match starts show. Tatanka lets out a “Yeeeyeeyeee!” war cry and the Las Vegas crowd does it back. The crowd appears to be hammered.

Following a lengthy feeling-out process involving lots of circling. Michaels goes for a couple of single-legs and Tatanka kicks him off. More circling.

Jim Ross: “I’ll try to remain objective but you know Oklahoma is the ‘Land of the Red Man’ and I’m kinda partial to Tatanka.”

They exchange hammerlocks. Michaels tries to take him down with top wrist-lock but Tatanka bridges up and tosses him off into the corner. Another tie-up and Michaels takes control with a side-headlock. Tatanka counters that as well. Michaels uses the ‘buckles for leverage with a side-headlock takedown. When he tries it again, Tatanka counters with an elevated backdrop suplex and goes on offense with knife-edge chops, Irish whip, catches Michaels coming off the top with an arm-drag, another arm-drag, dropkick, whip into the turnbuckles and (variation of Flair spot) Michaels goes for Flair flip and then Tatanka chips him on apron and HBK bumps to the floor. Michaels was great here selling Tatanka’s every blow like it was a potential match ender. HBK was a bumping machine.

Outside, the women stare-off over Michaels prone body but don’t get involved. They work a spot where Michaels tries to get back in and Tatanka cuts him off every time with chops. Of course, this makes no sense since he couldn’t win the belt on a countout.

Michaels finally gets a thumb to the eye, rams his head into the turnbuckle (from the apron) and reenters the ring with a top-rope sunset flip for a near-fall. You’d think that Michaels was challenging Tatanka for the championship from the way they were working, not the other way around.

Michaels hits a Bionic elbow in one of his few offensive moves of the early going but Tatanka catches a leapfrog into an inverted atomic drop, hits a cool jumping DDT, tries to slow the pace down with an armbar, arm-wringers, chops to the injured shoulder. ‘The Heartbreak Kid’ keeps trying to escape by pulling hair, but Tatanka keeps working on the arm/shoulder.

A cool spot comes when Michaels escapes but stupidly goes for a clothesline which hurts him more than Tatanka (who doesn’t bump).

Tatanka dominates with armbars, until he decides to move in for the kill with a shoulder, elbow drop, Tomahawk chop from the top rope – for some unknown reason he doesn’t go for the cover after any of these. When he goes for second Tomahawk chop, Michaels counters with Sweet Chin Music which by this was sold as a finisher (more so than the actual finishers Michaels had) even before it had a gimmicky name. Unfortunately, the Champ is too hurt to go for the cover right away.

HBK resorts to throwing Tatanka out and the women stare-off again, this time over ‘The Native American Warrior’. Michaels hits a cool clothesline off the apron.

In general, ol’ Heartbreak got much more offense than he had last year hitting a swinging neckbreaker, before performing an incredible standing dropkick in the style of Curt Hennig. I’m surprised he didn’t use that one more often. He locks in a lengthy WWF heel chinlock spot as the wind in the air shakes the ropes and hair. What will it be like this year? In New Jersey?

Michaels delivers some great jabs in the corner, followed by an awkward-looking modified victory roll. He doesn’t seem happy with how it ends up but tries exactly the same sequence again and Tatanka reverses it into the electric chair. Tatanka finally goes for a pin.

Randy Savage: “That was two and ninety nine one hundreds!”

Tatanka misses an elbow drop and Michaels hits three diving axe-handles off the buckles which just serves to fire up The Native American as he goes into no-sell Superman Comeback War Dance mode. Tatanka catches the superkick and delivers some big knife-edge chops with Michaels taking increasingly bigger/more over the top bumps for each one topped off with a Curt Hennig style super-sell. Tatanka hits a flying body-press from the top rope for two and a half. Michaels tries a desperation dropkick and gets caught and slingshot Hennig-style over the turnbuckle and into the ring-post for what looks suspiciously like a three count. The Las Vegas locals certainly thought so anyway.

Randy Savage: “The crowd is booing but the referee was correct there.”

Referee Joey Marella is having a tough time of it as the entire audience turn their wrath to him, rather than the heel in the ring.

Michaels desperately rakes the eyes and goes up top for a flying body-press attempt of his own but Tatanka catches him mid-air with a big powerslam. They are busting out all the big established finishes of the time as Tatanka uses it to score another suspiciously close nearfall.

Randy Savage: “The referee was slow!!!”

Realising he’s in trouble, Michaels uses desperation leverage move to send Tatanka out. This leads to the finish as  Michaels misses a dive to the floor and cracks his head against the ring steps.

The ending to this match appears to have been botched. As he is being counted out, Michaels trips up Marella and drags him out of the ring for some unknown reason. A big “Sherri! Sherri!” chant breaks out.

Back inside Michaels misses a wild punch and Tatanka drops him with the Samoan Drop. Marella drops down as if to count but instead signals for the bell.

Randy Savage: “He should have signaled for the bell before!”

Disqualification? No… that would have made sense. Finkus Maximus announced the winner as Tatanka via count-out. I guess Marella must have hated Tatanka or something. Cheap finish to protect both the title and the streak.

The Las Vegas crowd hated that finish with a passion and they let WWF know about it as they let rip with a booming “bullshit, bullshit” chant.

Post-match Sherri is apparently ‘having a word’ with him when Luna yanks her off the apron. The women have a catfight with Luna pulling Sherri off the apron, clotheslining and bodyslaming her on the outside before running backstage. The crowd were really into the women (not yet “Divas”) here. They would have infamous clothes-ripping catfight on Raw soon afterward.

“The way Tatanka sees it, to climb to the top in the World Wrestling Federation Tatanka will be successful.” (Tatanka, WrestleMania single, from WrestleMania: The Album, 1993)

I really thought we were going to get a ‘proper’ finish here. Judging by crowd reaction they thought the same in that Tatanka would either win the title or lose his undefeated streak. Of course, neither happened.

Unfortunately, the finish set the tone for the rest of the night (the only two clean finishes came in the two least important matches). In spite of that, the action was solid.

Qualitatively, I’d put this match somewhere near Michaels opener with Tito Santana the previous year, as although the moves aren’t quite a crisp the crowd are really into things.

The odd layout and odder finish detracted from some good action. Michaels trying to put Tatanka away early could be explained as him wanting the bragging rights of ending ‘The Streak’ by pinfall but what was up with Tatanka not going for any falls (and worse seemingly being content to win by count-out).

You can see how much Michaels has progressed as a character in the last year, as he’s much more dominant here in his role as champion. He manages to get the best out of Tatanka who looks at his best here carrying him to an entertaining near-twenty minute match.

I have no problem calling this a good match but at a around twenty minutes a little too long. I like Tatanka but he isn’t the type of worker who is best suited to this length of the match  and the cheap-count out finish didn’t go down well with either myself or the live crowd.

Ultimately, a quality match was bit overshadowed by the women at ringside and was just too long before ending by a cheap finish. All things considered, I’d say it must have been pretty good to get this spot on my list.

One gets the impression this would have been fine in the middle of the card.