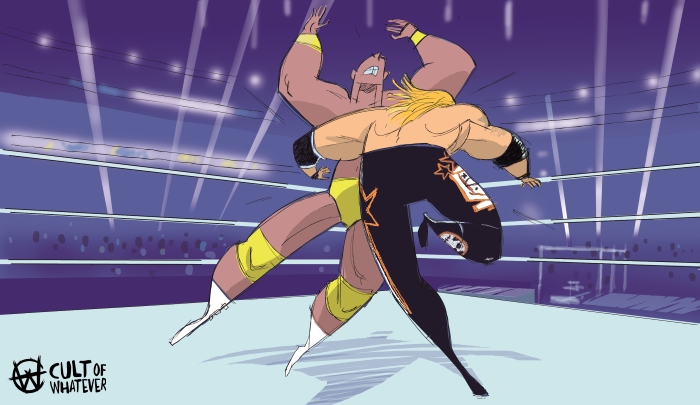 Michael Cole (during the introductory segment): “The epitome of pop culture!”

This was the first time in history a World Title Match was opening the show and yes, the announcers were Josh Matthews and Jerry Lawler at the desk and  Michael Cole inside the ‘Cole Mine’ (“The fortress of aptitude and attitude“) cubicle and they actually worked this show more like an episode of Raw where, following the usual singing of America the Beautiful, promo packages and fireworks – WWE used a lengthy promo (from one of the Main Eventers, no less even though The Rock wouldn’t wrestle at a WrestleMania again for another year) to ‘curtain jerk’. Whether that was an effective opening segment is actually one of the most debated issues with this show.

But technically, the first match was Edge vs Alberto Del Rio and that’s what I’m going to review here.

Following month’s of build-up to his debut Mexican newcomer Alberto Del Rio established himself right off the bat by injuring Rey Mysterio, Matt Hardy and Christian. Months later he found himself in the unique position of winning the only forty man Royal Rumble match in history.

Appropriately it is treated as a big deal.

Ricardo already in-ring introduces Del Rio as an image of Berty’s home pops up on the big screen behind him.

Alberto enters in a Rolls Royce Silver Spirit wearing an old school glittery gold lucha-style robe just for the big occasion. Cole tells us that is a portrait of Del Rio’s estate in Northern Mexico and that he employs “more than one hundred workers on his big ranch.” ‘Mexican Millionaire’.

Jerry Lawler: “And it seems like you’re on his payroll, Cole.”

The Mexican Millionaire’ soaks up the (surprising applause) he has Brodus Clay, his associate is at ringside. This is a match based almost as much around sidekicks as it is competitors.

Jerry Lawler: “It’s a good thing this guy’s got money because he’s got the personality of a jackass.”

Josh Matthews: “‘Captain Charisma’, the best friend of the World Heavyweight Champion, allowed to be at ringside.”

So I suppose, you are just allowed your best mate out there with you?

Edge comes out alone to a BIG pop. His final face turn took a while to ‘click’ but from TLC 2010 onwards he was very popular. Not Edge’s first World Title at WrestleMania but Edge had never won in a World Title Match at WrestleMania.

The fans (or at least majority) were expecting title change, which is always more interesting when a match could feasibly go either way.

The early match was slow. complete with intros in the ring. Not as much heat for Del Rio as one might expect. Edge is over.

Edge’s arm is bandaged due to Alberto previously injuring it with the cross arm-breaker. They start deliberately with an aggressive collar and elbow tie-up (worked well, like they were really trying to show their strength and test the other guy early) as Berto muscles Edge into corner for rope-break and disrespectfully shoves him. That gets a reaction.

Edge returns fire with a hard slap to face, punches and a backdrop. Alberto punches him in bad arm to cut off momentum but runs into another backdrop and bumps to the floor. Del Rio avoids Edge’s follow-up baseball slide dropkick and sends Edge barreling bad shoulder first into guardrail. Focuses on bad arm, ramming it into the ringsteps, stomping on it, and applying armbars back in-ring as he focuses on the body part whilst Christian tries to motivate Edge on.

Edge tries to fight back a few times with Alberto cutting him off by going back to arm-work including smashing it on the announce table as part of his master plan of setting up the cross-armbreaker.

Edge eventually punches out setting up a false finishing sequence as Alberto misses a charge and does a running lucha bump through the middle rope to the floor. Edge follows up by wiping him out with a slingshot somersault senton (you don’t see that from Edge often!) to the floor. Edge almost overshot the somersault since he catches Del Rio awkwardly on back of his shoulders.

It takes a lot out of both men because when Edge rolls Berty back in he goes up top but ‘The Mexican Millionaire’ catches him up there and hits a running armdrag from the top rope on the injured arm. The back and forth action continue as Edge catches Alberto running with a spinning heel kick, TheBigBoot, a flying forearm, clothesline and one-man flapjack for a near-fall. One thing I like about Edge is the way that he as a guy with a lot of ‘movez’ (who often/sometimes did too much) is that he could vary up his offense a bit, especially in big matches like this.

Speaking of which, ‘The Rated R Superstar’ sets up the Jumping DDT, one of those many secondary finishers of his, which Alberto reverses into a jumping arm-breaker and goes for the kill with the rolling cross-armbreaker which Edge counters into an Edge-o-Matic. Since he actually beat Orton with that move the previous Summer on Raw, the crowd actually pop big for the kick-out and a “Del Riooooooo!” chant starts which quickly spreads around the arena.

As if spurred on by this surprising show of support Del Rio rolls through an O’Connor roll-up into the cross-armbreaker as Cole (and some of the audience) scream for Edge to tap out. With the way he’s working here, it’s almost as if Del Rio is working babyface here, which makes no sense.

Edge sells it pretty well but is able to force the rope-break dragging himself to the ropes before rolling onto the apron, hitting a hair-pull hangman and climbing to the top turnbuckle. Once again Del Rio joins him up there and cuts him off with a running step-up enzuigiri.

When he goes for the cover, Edge gets his foot on the ropes but Ricardo shoves it off! This is the first interference of the match and they did well building up to it because by this point you had almost forgotten that everyone outside was there. In that sense, it is the opposite of Moore’s constant interference in the Mysterio/Hardy match. It certainly generates a reaction.

At this point, Christian gets into a brawl with Clay on the outside. Del Rio boots ‘Captain Charisma’ in the head and Clay blasts him with a T-Bone suplex on the arena floor, taking him out of the match. This almost backfires as the distraction allows ‘The Ultimate Opportunist’ to almost sneak a win with a cheeky roll-up.

Edge follows up with the Jumping DDT and sets up the Spear (Spear! Spear!). The crowd is into this now.

In one fluid motion, Del Rio sidesteps, Clay rams Edge’s arm into the ringpost and Alberto goes for the cross-armbreaker again. Edge does a good job selling the urgency of the situation, desperately trying to keep his fingers locked so Del Rio can’t apply it properly. It doesn’t work. The former MMA competitor is able to lock it in but Edge’s character is a ‘thinking man’s wrestler’ and as such rolls him Alberto’s shoulders onto the mat forcing him to let go lest he be pinned. The split second he releases the hold, Edge applies the Edgecator for a submission attempt of his own. The audience chant “Tap! Tap! Tap!”

That means people bought into the near-falls/near-submissions. Before he can interfere Christian hits a tornado DDT on Brodus on the stadium floor. In-ring, Berto forces the break by going after the injured arm but – Edge rolls through/FINISH. Finish out of nowhere. Spear actually looked pretty good this time because it was sold as a complete surprise without any theatrical set-up and came from a short distance.

Post-match, Edge walks up to Del Rio’s $100,000 plus Rolls Royce parked at the entrance stage, boots the driver’s door in and elbow drops on roof! Then Christian turns up with the tools and ‘The Rated R Superstar’ uses a tire iron to smash out the windows and scratch the paint off Del Rio’s car.

WrestleMania XXVII provided proof WWE can still churn out quality openers. Considering Edge’s injuries and that these two had the unenviable task of having to follow a lengthy promo segment from ‘The Most Electrifying Man in Show Biz Today‘ which had been worked and treated in the way their opening match normally would have been, these two made the best of their spot.

The story was that for all his arrogance and submission moves and despite having paid help on hand to help him Alberto Del Rio just wasn’t good enough (at that point) to beat an established star like Edge whether they were injured or not. The recurring theme of the match was that Edge was mentally so far ahead of the game that he was actually in control even when he was on defense, always thinking up his next comeback whilst he was getting beaten down to the extent he was even willing to let Del Rio put him in holds just so he could counter. In the end, he used that experience to his advantage and it played perfectly into the finish.

There is a nice little sub-story with Edge being too slow at climbing the ropes and so Berty is always able to counter. The somersault dive spot was designed to get over how important WrestleMania is because even a battered veteran like Edge is willing to pull out all the stops and take chances he normally wouldn’t. And he did.

It was nice to see Edge get to go out on a PPV (a WrestleMania at that) with a win and retire World Champion.

Overall this was a good match that gets better on repeated viewing. In ten years time, the WrestleMania XXXX fans of 2023 are going to be raving about this one and wondering why it wasn’t talked up more at the time. There was a strong sense of hierarchy here which I liked and the clean finish was somewhat of a surprise.

Not as good as Edge and Dolph Ziggler’s match that kicked off the Royal Rumble pay-per-view that January. The second time that year Edge kicked off a Big Four PPV with a World Title defense.

It was also an odd match because they went from a slow start to a shortish heel heat period to picking up the pace rather abruptly with a long closing sequence. Before rewatching it, I would have said that the match had no ‘middle’, except it did. It was just so short that it felt like they were rushing things along.

Del Rio was younger, fresher and not injured. Edge was craftier because he’d got more experience in big matches, a man who had seen and done it all. So he won.