“$50 Million Dollars”… No… that opening quote has nothing to do with the Million Dollar Man…that quote is from a local Phoenix newspaper that stated that Wrestlemania 25 brought approximately $50 million into the economy of Houston last year. You might wonder why I mention this….so let me explain and welcome you to a special edition of the SSP describing My Wrestlemania 26 Experience.

Last year all WWE package holders were put up in the one hotel room which was only a few minutes walk from a rail system that brought you right to the door of Wrestlemania 25 and it’s Axxcess sessions…. It was also only a few blocks away from where the Hall of Fame was to take place, so travel as you can imagine didn’t cost very much….

This year, all package holders were put into separate hotels…now from what I heard while I was there….we were the nearest hotel at approximately 20-30 mins from the University of Glendale, that’s about $60 in a car as the bus and metro system doesn’t accommodate you in a hotel outside of the city.

That minor setback a side…. Nothing was going to stop me from enjoying by Wrestlemania weekend….although a bus that left without us that contained our Wrestlemania tickets a few days prior almost did… 😉 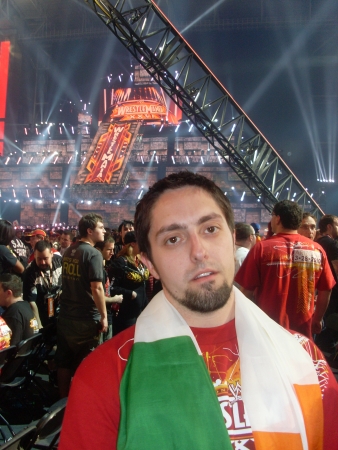 As mentioned above, the packages were split across 3 hotels, so there were to be 3 sets of superstars across all the hotels. We ended up seeing R-Truth and Christian which was cool, we also were only waiting for about 20 mins as suppose to the 3-4 hours of torture from last year. The other hotels reportedly got Michelle McCool and Kane at one session and CM Punk at another who apparently was on his phone for most of the session. I heard that from a fan so take that as you will but considering last year…I wouldn’t put it past him. Anyways…I got to meet good old Christian and got a massive “Whats Up!!“ and R-Truth signature to add to my autographs list….sadly no photos were allowed with the Superstars this year.

As we waited for the show to begin we got to witness all the WWE Superstars enter, getting plenty of pops and boo’s as they walked past. Before then I did notice quite a few names down on the floor, Malenko, Kidman, Slaughter, Mean Gene, Tony Garea, Dusty Rhodes to mention a few along with Jim Neidhart and a lot of the Hart family.

Batista stayed in character and stared down Cena, while Orton entered and gave Cena a playful dig to the ribs…which got a good laugh out of the crowd. To mention a few things; Edge and Christian were sitting together, Maryse sat front row next to Big Show and Batista with The Miz just behind them. Trips and Stephanie were in the front row, as were HBK and Cena, MVP and Kofi. Jericho sat behind Cody who was sitting in the same row as his father, Chris and Cody were talking quite a bit on and off during the show. I can’t remember the entire floor but it was nice to see the stars out of character sitting next to each other on the night.

Todd Grisham opened the show and told us not to yell at the superstars or cat call, which is understandable.

The superstars were inducted in the following order

It was sad to see some of the older stars in such a fragile state as the show went on, Pat Patterson helped Mad Dog during his speech and The Destroyer forgot what he was saying a few times…not that I minded at all, just thought it was a little sad. Rowdy Piper was clearly just making stuff up when he came out and Bob Uecker really lifted the crowd with his one liners… 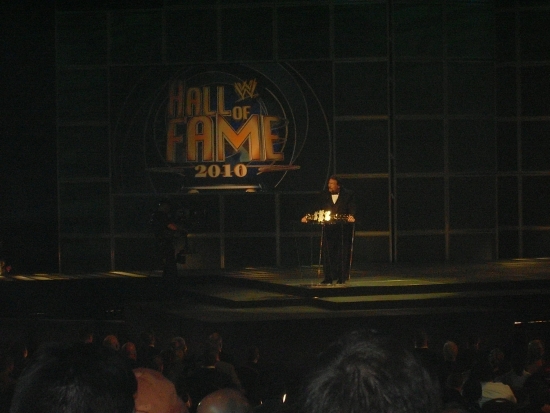 The Million Dollar Man was still an impressive speaker and said a great piece on how hard the younger generations should work in order to get to the top towards the end of the show…..and yes….there were $100 and $50’s falling for the rafters….and no…I didn’t catch any!

As everyone was leaving we heard a constant “Spear! Spear! Spear!” chant which could only be directed to one person…he had the last laugh 24 hours later…. Ha ha ha

After walking down from the Dodge Theatre from the Hall of Fame directly to the Axxcess session all dressed up, I didn’t expect the wrestlers to be there straight away as they were coming from the same place I was, but sure enough, Beth Phoenix was present on the Diva’s stand…I thought cool…but the scheduled line up for this session was The Miz, Dolph Ziggler, The Hart Dynasty and Alicia Fox. Now I was well happy with Alicia Fox not being there, but neither were the rest of them. For the first two hours you have Mark Henry, Savannah, Caylen Croft and Trent Barreta (on separate stands) and some NXT people. So we decided to wait for the change over half way through…out come Mickie James, Tiffany and the rest of the WWE NXT crew! Now I know the card is subject to change….but that’s taking the biscuit that is…

By the time you did a circle of the play to see who was at the stands the lines for the Diva’s were cut off! Correct me if I’m wrong but aren’t the NXT wrestlers on a show to see which one of them can become a superstar?? Yeah…that’s what I thought…so what the hell are they doing having them do superstar signing at an Axxcess session as part of their Wrestlemania package?? I know it was directly after the Hall of Fame, but maybe then they shouldn’t have had an Axxcess session on at that time. It left a sour taste in my mouth and I would say I’m not the only one…

In the arena there was a great buzz, a lot of energy, our block which was directly opposite the camera must have had about 20 Irish there with 5 tri-colours or more. Around us there were people from Scotland and England as well as the Irish, it would seem that most people that bought the package deals that we got weren’t American.

Before the main show we were treated to the 26 man battle royal the announcers made their entrances…The King and Matt Striker got good reactions, Michael Cole was booed yet again and a JR chant soon followed…sadly no JR to be seen. 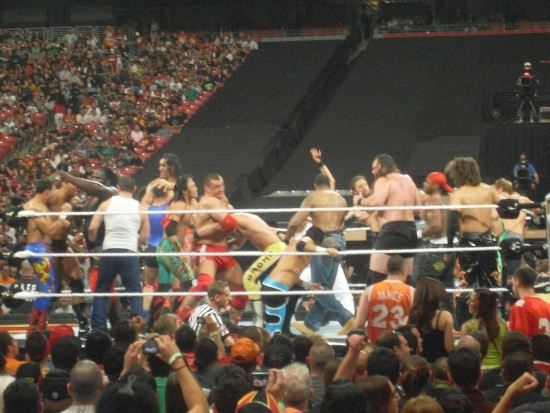 During the battle royal, the crowd were all for Santino, Finlay was quite popular in our block until he threw out Santino and a little reunion between Finlay and Hornswoggle got a pop from the crowd. Yoshi’s win was a little surprising; the crowd didn’t really react to be honest.

I thoroughly enjoyed the opening video package that was put together for Wrestlemania 26 and as a whole I must say that all the video packages during the show were some of the best I’ve seen. Normally I would find that the main event package stands out, but this year all of them were quality.

ShowMiz’s victory warmed up the crowd quite well and the divas match fitted in quite well with bringing the crowd down between main events. The tribute to Eddie was a nice touch, the crowd who were all over Vickie suddenly started cheering for her when she turned on the Latino Heat. 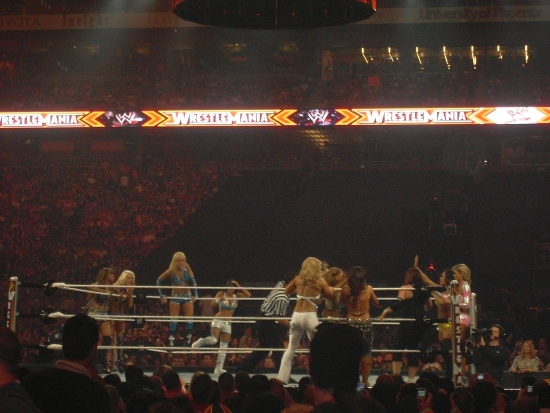 The Money in the Bank result shocked a lot of people, not many thought Swagger was going to get it and not a lot were happy with the result either. I understand why it was cashed in so quickly; with Shawn gone, Batista and Taker taking time off, a void was left that needed to be filled. I didn’t think Swagger was ready but his matches since Wrestlemania are beginning to change my opinion. 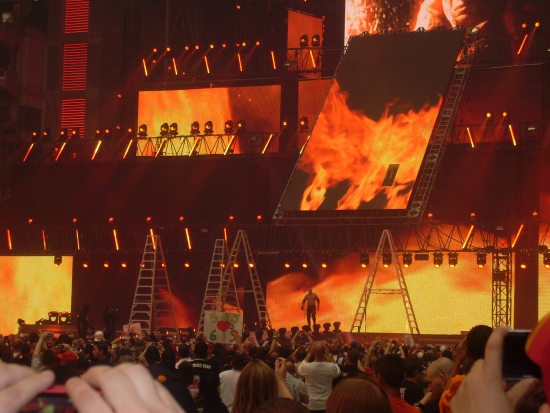 I thought Punk and Rey should of got more time, I think that the time given may have been done purposely as not to take anything away from the main events to come. Before Rey came out I actually thought he was going to be dressed up as Iron Man or something. I didn’t actually get the Avatar thing until after the PPV.

Trips Vs Sheamus had a great atmosphere, the chanting going back and forth between the Irish and everyone else who wanted Trips was great fun, thoroughly enjoyed that match. 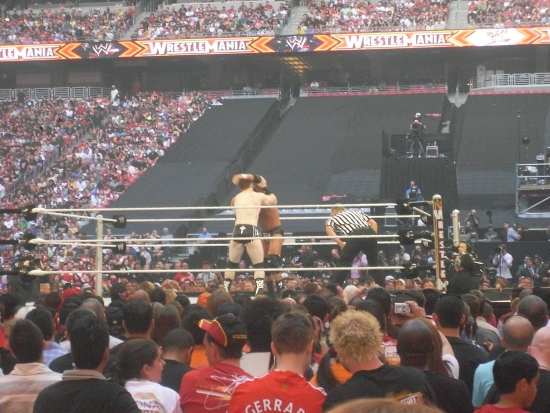 Edge and Jericho was also a great match, the crowd were split and I was never so happy to be wrong with my predictions as I was when Jericho hit that Codebreaker and got the pin. 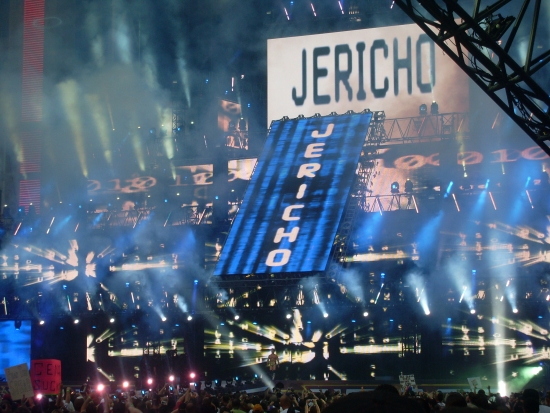 In my opinion the crowd during the Batista and Cena match made it better than it was. Cena has actually gone up in my books following what he did at the end of the match; for those that don’t know or didn’t see it, let me explain…I saw these guys last year, not sure how long they’ve been around, but they call themselves the FACtion of fans against Cena..I think, don’t quote me on that, it’s something along those lines…anyway these guys were in force this year and around ringside with a huge Cena Sucks banner. Our block had a lot of Cena fans, who even booed one of the FAC members as they were walking back to their seat. When Cena threw his t-shirt into the crowd, the FAC guys were trying to get the guy that caught it to throw it back…he wouldn’t… then after Cena won the match, he purposely got on the turnbuckle with his back facing the FAC fans before lifting the title. I thought that was quite funny, but what was even funnier was when he went over and leaned into them with the title after the match…respect to Cena I say, he gets some abuse and just takes it in his stride…

Bret and Vince wasn’t so much of a match as it was a humiliation and beat down of Vince, I’m sure that’s the way he wanted it though. The twist at the start was good and it was nice to see the Hart Dynasty associated with The Hitman, and as always, it was great to see Bret lock on the Sharpshooter.

Shawn Michaels and The Undertaker was amazing, great match up, Taker was hopping around quite a bit, not sure if he was genuinely injured or was just selling well. The spots were bang on and I honestly thought Shawn was going to win, especially when they announced it as the last match. When he didn’t I was in shock, a lot of people were, even those that wanted Taker to win finally realised that they had just witnessed Shawn’s last match. Very emotional, I still thought there was going to be some twist following the night but when I saw Shawn mouth “Time to come home” to the cameras I knew he was hanging up the boots. 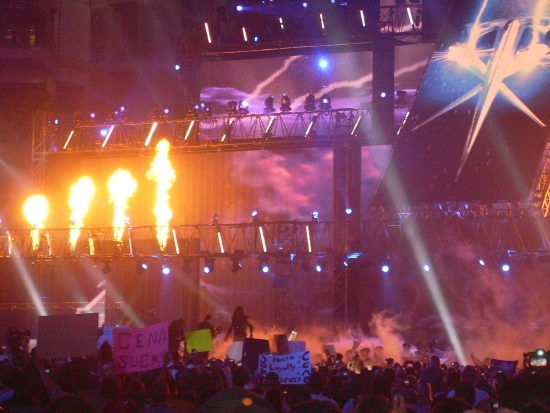 Now the below is my perception of the crowd reactions from being in the arena, this may have come across differently at home but in the block where I was, this is what I heard.

All in all my trip to Phoenix was one I will never forget, starting with the airline strikes and going to the retirement of one of the greatest professional wrestlers to ever lace up a pair of boots….we have all been privileged to have witnessed the career of Shawn Michaels and I am delighted to have been there to witness his last match…