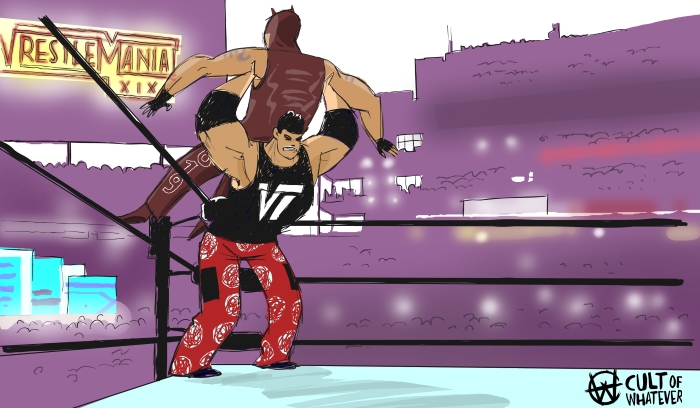 Jim Ross: “King, I tell ya this is my tenth WrestleMania and I’m just as excited today as I was in 1993!”

At least they didn’t make him wear a toga to commemorate this anniversary.

Ten years on from Michaels and Tatanka, WrestleMania again started with a Title defense as the Cruiserweight Championship kicked off ‘The Grandest Stage Of Them All’ for the first time.

In late 2002, Matt Hardy was on the roll of his career. Having been one of the highlights of the ‘Attitude Era‘, one of the problems WWE faced when it came time to push The Hardy Boyz as singles acts was having two similar acts on the same show.

This was one case where WWE’s controversial ‘Brand Extension’ came in handy as that Summer Matt jumped to SmackDown!, leaving younger brother Jeff on Raw, promptly reinventing himself as the conceited Matt Hardy Version 1.0 complete with new entrance music and ‘Mattitude’.

Between his entertaining interaction with the perpetually confused Brock Lesnar, ‘Winning Streak’ over The Undertaker, ‘Matt Facts’ that would appear onscreen during his entrances (eg: “Matt Strongly Dislikes Mustard”; “Matt’s pants are a size 34 in the waist”; “Matt is more handsome than Christian”), and advisory sessions where he would mentor MFer (Mattitude Follower) Shannon Moore all signs pointed to him being in a hot feud come ‘Mania Season’.

According to their respective autobiographies, The Hardy Boyz: Exist 2 Inspire (2003) and Adam Copeland on Edge (2004), he was all set for a feud with another rising star, Edge, which may or may not have culminated at this WrestleMania.

As it was the feud never happened, and even if it had the match wouldn’t have taken place since Edge ended up sitting out the show with a broken neck.

After his scheduled feud with Edge was given to Albert (who went from Velocity regular losing to Funaki to the fearsome A-Train in the space of around five minutes) and a short period of floating around with no clear direction, Hardy rebounded with a storyline that saw him try to slim down enough to fight for the Cruiserweight Title (WCW did the same thing with Disco Inferno a few years prior) which he won from Billy Kidman the month prior to ‘Mania at No Way Out.

Working with the Cruisers allowed Hardy to take on the Big Man role in matches, resurrecting power-based offense from his OMEGA days. He even threw in a few heavyweight standards like the Human Torture Rack spot he only used against Kidman-sized guys (which was a bit odd considering A-Train was using the same move against bigger opponents on the same show).

Hardy had a lot of heat at this point, partly because he was willing to be old-school-style annoying heel rather than the cool ‘destroyer’ type that seemed to be the fashion of the day.

On the other side, his opponent was Rey Mysterio. The man who revolutionised the Cruiserweight style opposite the likes of Psychosis, Juventud Guerrera, Ultimo Dragon and Eddy Guerrero in AAA, ECW and WCW.

If The Rockers are the best opening match act in WWF/E history, then Rey Mysterio is a very close second.

Taking into account his overall career prior to his 2002 WWE debut, he is my pick Number One. From ECW House Party 1996 to WCW Bash at the Beach that same year to WWE SummerSlam 2002, noone has kicked things off with quite the same level of style and excitement.

Between them, you had two of the best TV-style workers ever. The WWE version of Rey had moved away from the go-go-go style somewhat but very few Western workers in history could work a sprint as well as prime Mysterio (Randy Savage and prime Kurt Angle may be the exceptions). Expectations were high.

Jim Ross: “The John Wayne cufflinks! America is here! The world is watchin’!!!”

This was the first WrestleMania after the name change from WWF to WWE and the Big Stadium setting here added to the atmosphere.

This is Mysterio’s first WrestleMania and you get the impression you couldn’t be in safer hands kicking off the show as he popped out of trapdoor to fireworks in a purple bodysuit.

Hardy’s entrance is pretty cool in it’s own right with the whole antiquated dial-up internet connection, complete with special WrestleMania “Matt Facts” (“Matt is appearing in his fourth WrestleMania”; “Matt often wonders how they did WrestleMania without him“). At two hundred and twenty pounds we are informed he “just made the weight limit” (Michael Cole).

Pre-match, sidekick Shannon Moore distracts the challenger, setting up a failed sneak-attack as Hardy’s plan backfired when Mysterio backdrops him over the top rope then takes out Hardy and Moore with a corkscrew plancha. They are starting this one off fast.

Rey rolls ‘The Sensei of Mattitude’ back in and scores the first near-fall of the match with a victory roll, followed by a spinning heel kick that sends Hardy rolling onto the apron and an attempted sunset flip powerbomb to the floor which is broken up by some timely interference by Moore.

Back inside Matt scores a quick near-fall, following quickly by another when he goes all OMEGA and hits Ricochet. Moore chokes Mysterio over the ropes as Matt distracts the ref. Mysterio slips out of Twist of Fate but runs into a Side-Effect for a close near-fall.

‘The Ultimate Underdog’ attempts to make his underdog babyface comeback with forearms but Hardy uses his size advantage to cut him off with some stiff shots of his own followed by a big knife-edge chop in the corner (other than Jericho, why don’t we see more of those today?). Mr V.1’s advantage proves to be momentary as he misses a running shoulder into the ring-post and Rey racks up nearfalls with a springboard seated senton and springboard twisting cross-body.

Seizing the moment, Mysterio hits a tilt-a-whirl head scissors, tornado DDT (for another near-fall) and sets up the 619 only for Shannon to trip him as he was running the ropes. This sets up the most convincing false finish of the match, and arguably the show (on a show consisting of a million of ’em), as Hardy nails him with Twist of Fate.

Matt can’t believe it when Rey kicks out. You really did think it was all over. Seems a bit rushed. With all his big moves used up Matt goes for broke.

Tazz: “Could be a Splash Mountain Bomb from the second rope.”

Resulting in Mysterio countering Super Splash Mountain into a hurricanrana (like the finish of Guerrero/Mysterio at Halloween Havoc ’97) for another convincing near-fall. Shannon pulls Matt’s foot on the ropes and the actual finish comes as Rey grabbed Moore, Matt accidentally knocks his ‘MFer’ off the apron with a beefy forearm and Mysterio dropkicks him from behind, hits 619 but Hardy blocks a victory roll attempt (like Owen at WrestleMania X) and (unlike Owen) holds onto the ropes for leverage, giving him the 1-2-3 at 3:41.

On one hand, this was considered disappointing compared to what there two were capable of at this point. On the other, they did their best and it was an exciting start to what would turn out to be one of WWE’s best-ever shows.

This was a non-stop collection of finishers from relatively early on and they were smart enough to get the most out of the less than six minutes they were given. At the same time. there was a bit too much interference for such a short match.

These two would have a better structure, more traditional match on SmackDown! in an all-time classic which main evented the 5th June 2003 SmackDown!, that made my personal Top 100 matches of the decade where Mysterio finally won the Cruiserweight Title for the first time in WWE.

Given the time they were given, they made the right call on the night.

How much fun was this match? I broke my toe during the live pre-WrestleMania episode of Heat. I wasn’t wrestling or anything. Just spun around and cracked it on a solid oak table. When I woke up the next day it hard turned black. I didn’t let that stop me from enjoying this opening match.