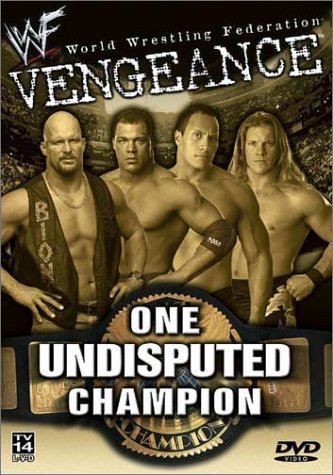 Here is the whole card:

WWF Vengeance 2001 would go down in history as the night when a superstar would become the WWF Undisputed World Champion. Four of the biggest WWF performers would take part in a one-night tournament for the title. The Rock, Steve Austin, Kurt Angle and Chris Jericho would all take part in the tournament. As well as the tournament for the undisputed championship, there also would be many more matches on the card, including Undertaker vs. RVD for the WWF Hardcore Championship and WWF Tag Team Championship match, Dudley Boys vs. Big Show & Kane.

Would WWF Vengeance 2001 go down in history as being the PPV that saw the crowning of an Undisputed World Champion? Or would it be remembered as being an undisputed disaster? Find Out.

This PPV will go down in history as being the first time in many, many years that a wrestling superstar has became a Undisputed World Champion, but what about the other matches, where they any good?

Well the short answer is yes, the PPV overall was quite enjoyable. The first match of the night saw Scotty 2 Hotty and Albert square off against the two Canadians, Test & Christian. This match was not a PPV calibre, but as opening matches go it was ok. Test & Christian worked well together against Albert & Scotty. Nothing really to say about this match, more Smackdown or Heat material.

Edge vs. William Regal for WWF IC Championship was the second match on the card. This was one of them matches where the differences in styles seem to clash again. Not taking any thing away from Regal, his style is just very different from anyone in the WWF. Regal is a good ‘mat-technician’, but hardly anyone in the WWF has the same style as him. This was an ok match again, Regal and Edge fought through to a hard battle, overall it was ok, one of the better outing from the pair together.

Jeff Hardy vs. Matt Hardy with Lita as special guest referee was the next match. Now for some weeks the WWF Creative team had been building a split between the two brothers, the split also involved Matt Hardy’s girlfriend, Lita. Matt was being portrayed as the bad guy, he was jealous over the relationship between Lita and Jeff, and Jeff was obviously the good guy in the angle. Now when this match was first announced, I thought it would be a highflying match, full of high spots, and a type of match that we would expect from the Hardy Boys. However the match was completely different. Neither man put much effort into the fight; it was slow and extremely boring. If any one went into the match thinking it would be a traditional high-flying Hardy Boys match, they would be sadly mistaken, very poor match.

The next match would feature WWF Women’s champion, Trish, who would go one-on-one with Jacqueline. This was an interesting match, because both females could actually wrestle to a certain degree. Trish developed some great wrestling skills over the past months, and really gives it to Jackie, who is probably one of the toughest female grapplers in the WWF. The match was entertaining, as women’s matches go, and both females give it their all.

WWF Hardcore Champion Rob Van Dam would face the Undertaker for the Hardcore Championship in the next match. This match was a surprise for me, I though that this match would be a total burial of RVD, which it was really, but it was an entertaining burial of RVD. Undertaker with a new mean streak (and hair cut) was out looking for respect in this match, the match came about after the Undertaker seemed to think no-one would give him respect, so he took his anger out on Mr Van Dam. The match was a continuous brawl with Taker gaining the advantage mostly, but let it be said, Undertaker did sell RVD moves, and he even let him get a few high spots in. The ending occurred when both men went to the staging area and brawled with each other, until Undertaker pulled off a chokeslam to RVD, hurling him off the stage. Undertaker scored the victory in a pretty decent match.

WWF Championship match was next, (who ever won advanced to final) Stone Cold vs. Kurt Angle, Yes; these two are fighting each other yet again on PPV. But, if they are entertaining let them fight. In this match Austin really showed that he is a good wrestler, and not just a brawler. Although he may never be on the same level as Kurt Angle for technical wrestling, he is not far off. Kurt Angle also gives a great amount of effort into this match, with himself trying to out wrestler Austin, and out brawl Austin. Both men put on an entertaining bout, worthy of their talents, great match.

World Championship match (WCW Championship) was next, The Rock would face Chris Jericho, and the winner would advance to the final. This was a typical Jericho, Rock match, although it was not as good as the No Mercy match between the two it was still an entertaining match. This match couldn’t have been better in any way really, although the interference from Mr. McMahon could have been left out. Never the less it was a good match with a slightly surprising ending as Y2J came up on top.

Now the final match, the winners of both WWF Championship match & World Championship Match would meet each other for the Undisputed World Wrestling Federation Championship. Now if you don’t already know, Austin & Y2J would fight in this match, and what a fight it was. With interference from Kurt Angle & The Rock, the match was exciting and unpredictable. Then Ric Flair came down to ring side, to try and restore some order, only to be met by an attack from Mr. McMahon. The match was all over the place, and then as Austin seemed to be gaining an advantage, Booker T returned and helps Jericho win the Championship. This match was decent, the wrestling was good, and the entertainment was good, although there was too much interference. But a great effort by Jericho. Now, although this match was good, and Jericho was good, it was not the historic moment the WWF made out, but it still was decent.

This PPV was good. I actually enjoyed most of the matches to a certain degree. The wrestling that Austin, Kurt Angle & Jericho displayed was nice to see. Although many of the matches had been done previously in WWF Shows, the matches were not boring. RVD vs. The Undertaker was a good match, nice to see that Undertaker knows how to sell moves. Some matches were a disappointment, mainly Edge vs. William Regal and Matt Hardy vs. Jeff Hardy, but that doesn’t really matter because the good matches were good. As a whole the card was petty good, not the best the WWF has to offer, but it was far from the worst. Oh yeah, no DVD extras, but still a nice little investment.