It was less than one month ago that the biggest PPV of the year happened, and Backlash 2001 really had a lot to live up to. For the past few weeks feuds had been brewing, some carried on from Wrestlemania and some new feuds had started. Backlash 2001 looked good on paper, but would it live up to the hype? With nearly every match having a stipulation or a title on the line Backlash 2001 had all the makings of a good PPV. Or would all the fancy matches and stipulations put all the average Wrestling fans off watching the PPV? 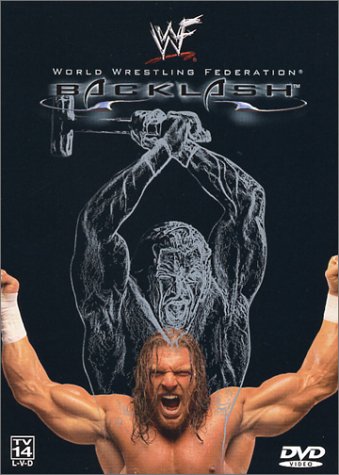 Although this PPV was in the shadow of one of the best Wrestlemania’s we’ve seen in a long time, it was not that bad. The PPV had its good and bad points. William Regal VS Chris Jericho was one of the worst matches of the night. With the “Duchess of Queensbury” rules, the match just went from bad to worst. Chris Jericho never knew the rules as he went into the match and I don’t think he knew them after the match. Chris Jericho had the match won several times during the match, but every time the Duchess would say it was not allowed, i.e. Time up for round 1 or some pathetic thing like that. The basic rules in the match were that they were made up as the match went along. And Regal won the match and scored the victory. The only good moment in this match was when Jericho put the Duchess in the Wall’s of Jericho. The match had its moments but overall nothing too special.

The Six man tag team match was ok, but it was not as good as some of the great matches that the PPV had in-store for us. All three of the Dudley family fought all the members of X -Factor in a decent match. X-Factor won but The Dudleyz managed to put X- Factor through a table. In reality this match lacked excitement it was more like a RAW or Smackdown Match.

The Hardcore title match had to be the best of the night. Two former ECW members fought in a battle which would of made Paul E proud. Rhyno defended his WWF Hardcore title against Raven. The two men brought everything to the ring and used everything. Taking chair shot after chair shot. Rhyno went for an impressive gore off the steel steps on the outside of the ring, but ended up goring himself into a steel chair, where Raven went for a pin and got a two count. The match continued until the shopping cart that Raven brought to the ring was put into use, Rhyno went to gore Raven and he flew himself into the shopping cart, which was very impressive indeed. Amazingly the manbeast kicked out and then he gored Raven and won the match. All in all a very good hardcore match and a great display by Raven and Rhyno.

Another great match was Big Show VS Shane McMahon .It was once again Shane O’Mac Mac VS a giant. The match was all about WCW VS WWF. Big Show who had been given a chance to either join the WCW or stay with Vinne Mac in the WWF was furious. He had stayed with the WWF with a little help from Vince and wanted to beat Shane. The match was hard on the Big Show as Shane used Kendo Sticks, books and anything else he could lay his hands on. Then Shane crawled under the ring got a rag and started to choke the Big Show out with it. Big Show fell to the floor and the ref stared to count. As the ref got closer to 10 Vince McMahon ran down nailed his son with a chair. Vince left and the Big Show recovered. The match continued and Test came in to help Shane, Big Show knocked Test out and then chased Shane. Shane climbed up the Backlash stage and the Big Show looked up at him, Test came from behind and knocked Big Show out. Then Shane went for his leap of faith and nailed the Big Show, with then help of Test Shane won the match. This match was good and full of excitement.

The last good point from Backlash was the Ultimate Submission match. Chris Benoit and Kurt Angle fought in a very good and once again entertaining match. With all submission moves you could think of this was truly a very good match.

Backlash 2001 was a very good PPV. It was better than I though and well worth buying on video. I would not buy it for the main event even though that was good, but the earlier matches in the PPV were exciting and more fun to watch. The high’s definitely out weight the low’s and the match of the night had to be Rhyno vs Raven.