WWE – Breaking The Code: Behind The Walls of Chris Jericho DVD Review 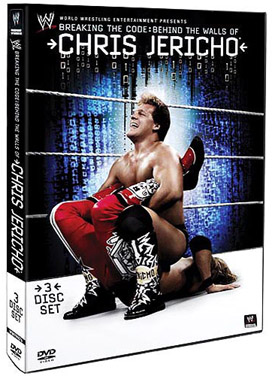 The first thing that struck me with the release of this look back at Chris Jericho’s career is that it’s taken us this long to finally have it. Sure, he had a videotape (if you missed the Attitude Era, ask your parents) released all they way back in the year 2000, but at that point, WWE hadn’t initiated their pursuit of owning all the wrestling video libraries in existence, so the content was light at best.

Fast-forward a decade, however, and the landscape has changed. Vince McMahon owns footage of almost all the televised wrestling that has taken place in the United States, something that has been a revelation when it comes to retrospective DVD releases. Imagine how empty the fantastic Ric Flair DVD set would’ve been if they only had WWE footage, or how incomplete the stories of Eddie Guerrero, Rey Mysterio and others would have felt if they could only include their runs under McMahon. No, the purchase of the video libraries has been a great success so far.

Breaking the Code, while at first feeling overdue, has actually been released at the right time. Jericho has a body of work that doesn’t need to take a back seat to anyone else and it’s only because he’s at a point in his career where there’s nothing left to accomplish that we can truly appreciate the man and his achievements. From his beginnings in Canada to the short-lived but fun Smoky Mountain, through the tours of Japan, Europe and Mexico and finally recognition in ECW, fame in WCW and legend-status in WWE, this DVD covers it all.

The selection of talking heads are pretty much all relevant, but it’s Jericho himself who understandably provides the best value. From telling us about his beginnings at the world-famous Hart Family Dungeon (where he met Bruce Hart once and that was it in regards to instructions from the Harts themselves – although, he does point out that the people who did teach him had learned from Stu, so they knew exactly what they were doing) to meeting Lance Storm and forging a friendship that endures to this day… even if the promos they cut back then are hilariously inept.

His international experience and short stint in ECW is covered quickly before the documentary switches its attention to WCW, where Jericho floundered as the most generic babyface imaginable… until a stroke of luck (and apathy) allowed him to become the man who would never, “evvvvverrr,” do that again, the man who was a conspiracy victim and yes, the man of 1004 holds. The infamous “Armbar” segment is mentioned here, but shown fully in the extras and I imagine it’ll be lost on those who weren’t around to understand the context… but for those who do, there is no way you’ll be able to keep a straight face. ARMBAR!!!

Rounding off WCW, Jericho regales us with tales of the aborted feud with Goldberg, the genuinely hilarious Ralphus (and the frankly awesome Spinal Tap-esque walk around the backstage area) and his decision to leave WCW for where he would make become a worldwide icon, the WWE.

Surprisingly, Jericho is unhappy with the way his debut appearance on RAW went down, in particular the facial expressions he pulls during the Rock’s retort. I can see his point and it’s easy to visualise the modern-day Jericho verbal sparring with The Rock being a much more attractive deal. The set then whizzes through Jericho’s ten-year WWE career, focusing on the genuinely unexpected win to become Undisputed Champion and what it meant to him as a person and a performer.

The evolution of the character is a joy to behold and the way Jericho tells it, you can tell it was a joy to experience as well. But, as with anything, too much of a good thing creates apathy and a going-through-the-motions feeling. Jericho wanted to step away and spend time doing his first love… rock music. Specifically, his band Fozzy; a group who started out as a covers band who claimed the bands known for the songs were actually covering them (the story goes that Fozzy invented rock/metal music, but got conned on a contract that kept them in Japan for twenty years. Now free from that contract, the “truth” could now be revealed).

Much like with his wrestling persona, Jericho is quite candid in discussing the evolution of his band as well. Not wanting to be just known for covers, they decided to write their own work and, after years of hard work, are now considered as serious and credible musicians in their own right. World tours, #1 albums, videos getting airplay on the music networks, it’s not hard to see why Chris Jericho, the little kid from Canada who wanted to be either a rock star or a wrestler, feels blessed to have done both.

Of course, wrestling has an allure that few can resist, so, inspired by his original debut, the Save_Us vignettes began. To say they had the wrestling world abuzz would be an understatement. Even when it had been worked out who was behind them (a leaked cover of WWE Magazine confirmed it), the excitement was still there. However, the new look Jericho didn’t click with audiences the same way and the whole persona seemed tired and clichéd. Luckily this was realised pretty early on during an excellent series of PPV and TV appearances, Chris Jericho hit his stride as one of the best heels of this generation. And he did this by telling the truth and being an honest man. Shawn Michaels faked a knee injury on his way to a win over Batista. Rather than give up the ruse there and then, HBK kept it up for weeks as Jericho needled him to be honest. Eventually, Chris came to believe that Shawn was hurt, only for Michaels to own up and superkick the Canadian. In another era, Michaels would’ve now been a heel and Jericho the crusading good guy who was telling us the truth all along. But this isn’t another era and the fans wouldn’t boo Michaels, they booed Jericho for being so pious. Thus began the current incarnation of Chris Jericho and another great run on top.

The Codebreaker got over as a finisher after a huge backlash to begin with, Jericho got to face Ricky Streamboat at WrestleMania of all places (you know that the 14yo kid inside him was giddy as a gibbon over that). Facing Shawn Michaels at ‘Mania and then Steamboat is something he probably thought would never happen. Going against one idol is lucky, but getting the chance to do it twice is the stuff of dreams.

After viewing this documentary, it’s easy to see why Chris Jericho proclaiming himself to be “the best in the world at what I do,” isn’t an idle boast, it’s just him being honest… again.

There’s a ton of extras on the first disc and they’re all pretty much worth watching. From giggling at the stunningly bad promos from The Thrillseekers (Jericho & Lance Storm) to the tales of Heyman’s imaginary room-mate, Mr. Salty, the stunningly creative Man of 1004 Holds segment, Jericho lobbying Congress to get a heinous travesty overturned and his WWE debut, it’s a wealth of rarely seen or never-can-be-seen-enough material that brought a genuine smile to my face.

Discs 2 and 3 are essentially extras comprising NINETEEN complete matches, some with alternate commentary by Jericho and Matt Striker and, for once, during the Japanese match, Striker proves his worth due to his legitimate knowledge of the non-WWE wrestling landscape.

The WCW Cruiserweight matches are the stand-outs from disc two (it’s amazing to think how badly WWE managed this division when you see how effortless it looks for WCW to have made it a success) as is the Undisputed Championship victory over Austin from 2001. Disc 3 has two blistering outings against Shawn Michaels and a stunning outing with Rey Mysterio that are all valid contentions for Best Match honours. The only downside here is the last match chosen, the rather pedestrian affair against Edge from WrestleMania that promised so much, but didn’t quite deliver. It’s a flat end to a stunning run of wrestling matches.

One of the most comprehensive profile releases WWE have put out since the video library acquisitions began. Jericho is a charismatic subject (which shouldn’t really be a surprise) and the level of honesty at times is refreshing. The talking heads are all relevant and the various chapters in Jericho’s evolution are explained well and truly entertain.

The extras are also top-notch, with a stunning array of matches and segments that combine to make this one of the most essential purchases WWE have ever issued.

If you like professional wrestling, you need to own this. It’s that simple. In the words of the man himself (almost); when WWE get it right, as the do here, they’re the best in the world at what they do.