The date was September 23rd 2001, the place, Mellon Arena Pittsburgh, PA, and the PPV was Unforgiven. This PPV was the most emotionally charged of the whole of 2001. The main event would feature the WWF Champion Stone Cold Steve Austin against Kurt Angle. Also the night would feature a WCW World Championship match, The Rock who holds the title, would put it against up both Booker T and Alliance Co-Owner Shane McMahon in a Handicap match. 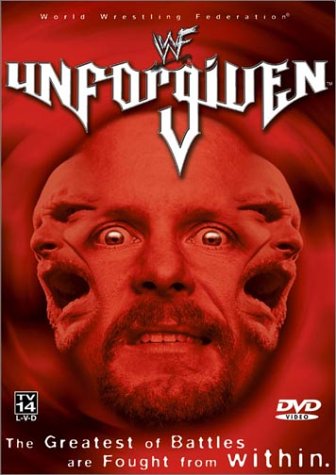 The feud between Angle and Austin had reached an ultimate climax; both men for weeks had been attacking each other. The previous PPV Summerslam saw Austin retain the WWF World title against Angle, in an unfair bout in which Alliance referee Nick Patrick disqualified Austin, so he could retain his title, would this match live up to the previous match at Summerslam? The Rock won the WCW world title at Summerslam from Booker T, now he would have to fight both Shane McMahon and Booker T, would he be successful again?

The WWF always provides us with a mixture of great wrestling and absolutely terrible wrestling, Unforgiven 2001 was no exception, some of the matches were great, but some were bad, some were really bad. The first match I will look at featured Raven VS. Perry Saturn, this match had come about when Perry Saturn dumped Terri for a household mop, and Terri turned to Raven. This match was pretty simplistic, the two former ECW & WCW wrestlers battled with each other into an average match, nothing special.

The Fatal Four –Way Elimination Match for the WWF Tag team championship featured a mixture of Alliance teams and WWF teams. The former WWF Champions Matt & Jeff Hardy were up to their usual high-flying antics, they were facing there long-term nemesis’ The Dudley Boyz, who battled heavily with Matt & Jeff, performed with a top quality edge. The un-likely comical team of Big Show and Spike Dudley were after some tag-championship gold in this bout, unfortunately however comical this team would not win any tag gold, as the team was not experienced as the others in this match. Lance Storm and The Hurricane probably could have been the best team in this match, however it was not their day and the team did not perform as good as they could. Overall this match was ok, a mixture of good entertainment and good moves.

Going from one set of tag team titles to another, WCW Tag Team title Championship match, Kane & Undertaker VS. Bryan Clark & Brian Adams of the tag team Kronik, who were accompanied by Steven Richards. There had been a lot of negative speculation about this match before the PPV. When the match came about, no amount of negative press could have described what the outcome of this match would be like. The match was appalling, Undertaker & Kane tried to sell the moves of Adams & Clark but it turned out to be a farce, Adams and Clark would try to out wrestle Undertaker & Kane, but again it turned out to be utterly rubbish, this was truly the worst match of 2001.

Two big faces would face off with each other; WWF Hardcore Champion Rob Van Damm would battle Y2J Chris Jericho. This could have been a great match, and it was to a certain extent. With the crowd cheering 50/50 for both men, RVD and Jericho put on a great match. As the match was being for the Hardcore title we would see all the weapons and moves, which were familiar from both men. The ladder usually associated with the Hardys was brought into ring, and both men excellently used it, and with RVD’s Five-Star frog Splash, the match was almost a Five-Star effort.

Former WWF Tag Team Champions would battle each other for the WWF IC title. Edge the champion would face Christian, this should have been a Five-Star match, and sadly it didn’t meet that expectation. It was a highly entertaining match, but it didn’t have that edge, pardon the pun, it seemed to be less exciting than I thought it would be. However this was one of the better matches of the night, regardless.

Again two former ECW superstars would do battle, this time for the WCW U.S. Championship title. The champion Tajiri, accompanied by Torrie Wilson would do battle against the “Man-Beast” Rhyno. This was not a special match, but it is always entertaining to see Tajiri and Rhyno do battle. With Rhyno the powerhouse and Tajiri the “Japanese Buzzsaw” this match was quite good, not the match of the night, but again not the worst match by far.

Now the WCW Championship Handicap match, The Rock would do battle against Shane McMahon and former WCW World Champion Booker T. We all knew this would not be a classic WCW World title bout, not a Flair VS Steamboat or Flair VS Sting, but this match still had the magnitude to entertain the fans. The match did entertain the fans, but quite frankly it would have been more entertaining if it was just Rock VS Booker T, and no Shane McMahon. But at the risk of repeating two main events in a row the WWF decided to make it a handicap match. The match was filled with good entertainment and a little skilled wrestling, Test & Bradshaw interfered & a handful of high-risk moves from Shane McMahon, made this match slightly more watchable than I first imagined.

Now the main-event, WWF Champion Stone Cold would do battle against Kurt Angle. These two men had been battling with each other since the WWF Invasion PPV, and this bout would be one of the best matches they would have together. The match featured some good all-round wrestling with a variety of styles from both Angle and Austin. Both men really pulled out all the stops in this match, although it was not as good as the Summerslam match which saw Austin retain the title, this match was not far behind. This match had to be the match of the PPV, both Austin & Angle performed at a 100%, which produced a great entertaining match. The ending to the match was pretty emotional with Kurt’s family coming to the ring and a host of WWF Superstars to congratulate him on his victory, good entertainment overall.

This PPV was a mixture of the good, the bad and the even worse. With the worst match of the whole year being on the card, Undertaker & Kane VS Kronik the PPV seemed doomed, however great efforts from RVD, Y2J, The Rock, Austin and Kurt Angle, the PPV was lifted up to a better level. The matches of the night were Austin VS Angle, and in a thrilling match, RVD VS Jericho. This was not a PPV of the year, but it had some high spots. If you want a good PPV as a whole, then don’t get this, but if you want a PPV with some high spots then this might just be for you. However if you are thinking about getting the DVD for the extras think again, No DVD extras in this PPV.