It was billed as ‘Winner Take All’, the WWF would finally take on the Alliance, in the final PPV of the Invasion angle. The main event featured team WWF, which consisted of The Rock, Chris Jericho, Undertaker, Kane & The Big Show, and they would do battle against team Alliance, which featured RVD, Shane McMahon, Booker T, Stone Cold Steve Austin & Kurt Angle. The PPV was the climax of the failed Invasion angle, which featured WCW/ECW forming an ‘Alliance’ to try and destroy the WWF, whoever won the main event would be the surviving company. Would the WWF continue its unforgettable legacy, or would the Alliance reign supreme? 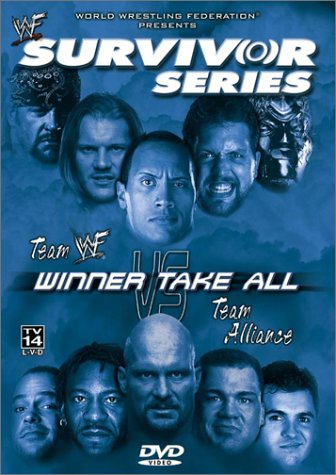 The featured a whole load of matches, here are the following.

The night would also feature too title unification matches. The Hardy Boys (WWF Tag Champs) would take on their long time rivals The Dudley Boys (WCW Tag champs) in a steel cage match. Would the Dudley Boys, who are regarded as the most successful tag team in history, winning the WWF, ECW & WCW tag titles, be able to beat the Hardys?

Also Edge, the current WCW US Champion, would take on Test, the WWF IC Champion in a battle for unification title. The WCW US title held by many greats such as Ric Flair, and the IC title held by the likes of Shawn Michaels & Bret Hart would dissolve into one title, whichever company survived would use the respective title.

This was it; it was the end of the Invasion angle. Either the WWF would survive or the Alliance would take over the WWF. The Alliance angle had begun back in June, and since day one it was the biggest failure ever. The matches were pretty good quality, but the storyline didn’t seem to be going anywhere. This PPV seemed to be just as the previous PPV’s in the WWF vs. Alliance angle. Now at the beginning of the PPV, we saw Al Snow vs. Christian for the European title. This match was actually pretty good. Although there was no match history between the two, they both are great athletes, and have good wrestling talent. With both similar wrestling styles, the match was entertaining to say the least. Tajri vs. William Regal, this match was not very good. Both wrestlers are great talents, but their styles are totally different. It was this contrast in wrestling style, which made the match poor.

Edge vs. Test, the first ever WWF IC title & WCW USA Title unification match. Now Edge is no Ric Flair, and Test sure isn’t no Bret Hart, never-the- less this match was historic. Edge and Test are great in-ring talents, and this match once again was entertaining. I personally think that Test & Edge are future WWF champions, and with a matches like this, they could possibly have a great future in the WWF main-event league. I think that this match might have been a slight – burial of the WCW US & WWF IC Title. However, the match was entertaining.

Another title Unification match, Hardy Boys vs. Dudley Boys. I don’t know how many times this team have fought each other but this outing was to the same level of standard as we can expect from two of the biggest tag teams in the WWF. The match started off slightly slow with the usual Dudley Boys style. But then the Hardys picked us their pace, and soon the match began to take shape. Now, it was not a usual Hardys vs. Dudley Boys, this match was in a steel cage. Both teams made use of the cage; the usual highflying antics of the The Hardys came into play, as well as the hard-hitting style of the Dudley’s. I enjoyed this match very much; I know that many people criticise the Hardy Boys, but I think that as a tag team, they are pretty good. The match would not be complete without the usual ‘high spot’ from Jeff Hardy, and this ‘leap’ was pretty good. Overall good entertaining match, what you can usually expect from the The Hardys and Dudley Boys.

The next match was the Immunity Battle Royal. This match featured all the WWF & Alliance members that were not involved in any storylines or matches at the PPV. However, Test who had already been involved in a match managed to get in the match. The match also involved the likes of DDP, Billy & Chuck, the Hurricane & the APA. Again the match featured some of those who had not really been involved in the Invasion angle, such as Tommy Dreamer, Raven, Justin Credible, & Hugh Morris. Now the actually match was not the great for wrestling skills, because it was a battle royal. Tazz, Hugh Morris & Chavo Jr all got involved in the match as well, all 22 men fighting for the Immunity, which meant that they would be employed in the winning team, for at least 1 year. I don’t know how much one man can be pushed, but Test has been pushed a fair amount, he eventually won the match. I would have preferred some one like DDP or Lance Storm to have won, but the outcome was Test. This match was entertaining to a degree, but not filled with wrestling talent.

The women’s six pack challenge was quite a surprise. I mean the ladies division in the WWF has never been known for great wrestling. But this match was not that, Jazz the former ECW star, was the mystery women in this match, and see did live up to her aggressive reputation. All women in the match should a level of skill, but Trish Stratus should that he can actually wrestle, and she is the most improved women wrestler in the WWF.

The main event, at last the WWF would do battle with the Alliance for the last time. The WWF finest would take on the Alliance finest. With a felling that a member of team Alliance would turn, and join the WWF, most fans were coming to their own conclusion of who would turn. McMahon had indicated that Austin would return back to the WWF, however this would turn out to be false. The pre-match interview with team WWF, and Mr McMahon created a sense that the WWF would win. When it came down to the match, it was filled with entertainment and high spots. The Undertaker even pulled out an impressive Tombstone pile driver. I must admit this match was pretty exciting, but hugely predictable, even right down to what order that team members would be eliminated. The final bit of that match, with Angle & Austin, and Jericho & Rock were pretty good. This final part is when the most wrestling took place, but saying that all team members had a good match. The match as a whole was pretty decent with a predictable ending.

This PPV was the final in a pretty poor angle. For me, and I think I speak of most people when I say it couldn’t have come any sooner. I did think this PPV ended the Invasion angle pretty good. Most of the matches of the night where good. If you are think about buying the DVD or Video I would advise the DVD if possible. As well as the great visual quality it has a host of extras. Including the one of the best ever WWF Raw shows, when we see Jerry Lawler & Ric Flair return, it has highlight from that night, pretty good PPV.