The feud with The Deadman and The Bionic Red Neck had reached boiling point on the way to this PPV. With both Undertaker and Austin taking each other out by various means and ways. Could the Deadman mark his one-year anniversary back to the ring by winning the WWF title for a forth time? It wasn’t only Undertaker and Austin in a big feud, HHH and Kane were going head to head, in a chain match for the WWF IC title. At the previous PPV, Backlash the PPV buy rates had been dismal, could a feud in which has been repeated over and over again do the trick? find out. 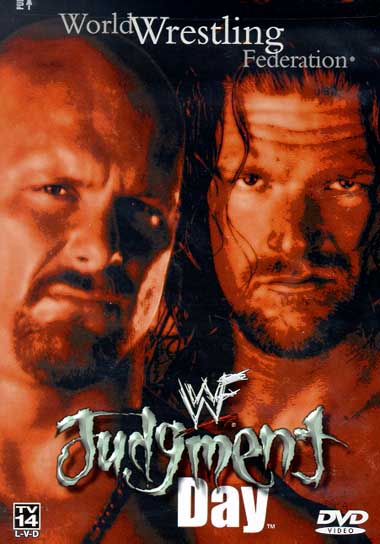 The WWF was not doing too good at this time, with no basis and no-one to challenge the WWF Champion Steve Austin it was time to go ‘Old School’ by using The Undertaker and Steve Austin feud once AGAIN. Yes, I say once again folks because these stars fought in the May of 1999, and the May of 1998, so I ask myself, why would the WWF do it again?

Well I always give credit where credit is due and these guys do deserve it, it might not have been the best match on the card but both Undertaker and Steve ‘What?’ Austin put on a good show. Don’t get me wrong the match was no match of the year but I enjoyed it, It had the usual chairs, being put through a table and the usual interference. It was a sound match and had been better than expected.

We move on to the best match of the night, Chris Benoit vs Kurt Angle in what was a first class match. As usual both men give 110%. It was a 2 out of 3 falls match and it had a twist. The first falls was a standard rules match. Second falls was a submission match and the final fall was a ladder match with Kurt’s Gold medals suspended high above the ring. The match was not a highflying ladder match like the TLC matches, but it was not a boring singles match. It was good quality wrestling and had a hint of spice and excitement with the stipulations, It was the third PPV in a row that these men squared off with one an other and it had to be the best of the all three.

Ah, Could it get any worse? I am afraid it just did, Chyna and Lita fought in a Women’s title match. This feud was virtually non-existent and so were the wrestling skills. With a few slaps, a power slam and maybe an Irish whip, I have seen more wrestling skills in a Billy Gunn match. The most exciting part of the match was Chyna’s thing around her neck, and the best part of the match was the end. It was not needed on the card; it was not wanted on the card and why was it on the Card?

Well folks I have had my usual moan and grumble and now that’s off my chest I can tell my overall thoughts of this PPV. It was nothing great, but nothing terrible. If you want to see an overall ok PPV then this is the one, with not much special and a few added stipulations to make things a bit more interesting. It will not be one of the most memorable WWF PPV’s in 2001, but it was ok.