Each year the WWF put on 2 PPV’s in the UK, this was one of them. This PPV would be historic however, never have the ‘Alliance’ members as a group been on a WWF UK show. Weeks prior to the event, stars such as Booker T & RVD were billed to be on the show, however these superstars did not feature on the event. Superstars that have not been part of WWF UK Shows in the past, such as DDP, Tajri, Torrie Wilson & The Hurricane were all featured on the PPV. WWF superstars such as Chris Jericho, Big Show, The Rock and many more all featured on the PPV, however some noticeable absence from team WWF occurred as Undertaker & Kane were featured at a house show back in the United States. 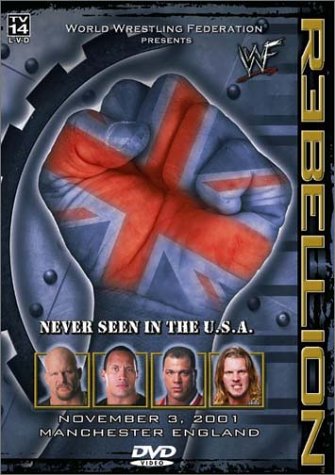 The card on paper seemed to be a mixture of matches, with some less interesting matches, such as DDP vs. The Big Show, and some really interesting matches such as Stone Cold vs. The Rock in the main event, and Edge vs. Christian in a steel cage match for the WWF IC title. Also the WCW World title would be up for grabs, as the newest addition of team Alliance, Kurt Angle would challenge Chris Jericho.

As I said previously this card seemed to be one of the best, considering it was a UK PPV. However most people had their own predictions about the outcomes of the matches, and most people would be correct. WWF titles have only ever changed hands a few times in the UK; this PPV would be no exception. The match qualities differed throughout the PPV, some good matches, some bad matches, and some just plain old average.

The first match was one of the ones I was looking forward too. Edge vs. Christian in a steel cage for the WWF IC championship. Edge and Christian are well known for their great matches, the TLC matches, Ladder matches and many more. I was hoping that this match would ‘reek of awesomeness’, just as the ladder match at No Mercy between the two had. However, it was a slight disappointment. The match got off to a good start, and both men put on a good performance. But, the match soon became a disappointment when neither men took any high risks, which we generally expect from the two. The steel cage was that of old style, in the sense that it was bars and did not lower from the roof. It may seem irrelevant, but I think the cage may have possibly been to low, and not strong enough for any high-risk offensive moves. The match overall was ok, I was slightly disappointed with the way it finished.

Scotty 2 Hotty vs. The Hurricane was a good match. Both of these men are good wrestling talents. It had no story line behind it, however it was entertaining and good display of both men’s skill. The next match featured DDP vs. The Big Show, this match was not really entertaining, just the usual you can come to expect from the Big Show. I’m a fan of DDP, but that’s not a good thing, it’s a bad thing, because this match didn’t do him any favours. Although DDP is pretty funny with this motivational speaker gimmick.

Just before the next match there was a nice little backstage skit, with Kurt Angle, Stone Cold, Shane McMahon & Debra. Main basis was that Kurt Angle was talking about them being sat around a round-table, and the Knights of the Round Table. Pretty funny, as you can expect from Stone Cold & Angle.

The WCW tag team title match, with Hardy Boys, Dudley Boys & APA, was up next. Now this match was pretty decent. Instead of the usual Hardy Boys vs. Dudley Boys, the APA was thrown in to freshen the match up. With the high-flying spots of the Hardy Boys, the brawling of the APA, and the tag team skills of the Dudley Boys this match was pretty entertaining. With the APA being eliminated, the Dudley Boys brought out the tables and tried to use them to their advantage, but failed. The match was just like the average Hardy Boys vs. Dudley Boys match, minus the APA. Again, the outcome was most predictable, which let the match down slightly.

Now footage of the past week was shown, with the Rock & Chris Jericho losing their tag team titles against Test & Booker T. Then footage with Mr McMahon, giving pep talk to Rock & Jericho was shown. A little brawl between the two occurred, to further the feud with them.

The next match was William Regal vs. Tajri. Now with no disrespect to either men, I can’t stand the matches between the two. The wrestlers are great, just Regal is a mat technician and Tajri is a Cruiserweight, thus making their styles very different, and the matches not very fluid. It would be better to put, Tajri is a Cruiserweight match, and Regal in some other match.

The next match would see Kurt Angle vs. Chris Jericho in a WCW title match. Both men are great athletes, great wrestlers, which made a nice match. The match had a good pace throughout, Kurt Angle used his ‘Olympic’ ability, and Jericho fought back with his own offence. The match was really entertaining, especially as it was for the WCW World title, which Jericho held, instead of the WCW US title, which Angle held. A few times in the match I thought that Angle would win, however Jericho kept fighting. The crowd were not really behind any one in this match, as Angle was hated for being a Alliance member, and Jericho was on the edge of turning fully fledge heel. There was some crowd reaction but not what you would expect in a WCW World title match. Both men put on a good match, nice ending to it. It was hardly any of the NWA/WCW Championship matches, but it was pretty good never the less .The next match was the Alliance Women vs. the WWF Women with Trish Stratus as the guest referee. This match was ok, nothing special, just the usual you can expect from the ladies division.

Now the main event, The Rock vs. Stone Cold Steve Austin, The first rematch between the two since WrestleMania 17. This match had all the making of a classic bout; well at least in the UK anyway. The match quality of both men was good, as we can normally expect. The match started quick, and it was a mirror image of the matches these two have had before at Wrestlemania 15, and Wtestlemania 17. The fight took to the ringside and the crowd were unsurprisingly behind the Rock all the way. Regardless if you like the two, the match was extremely entertaining, well at least I thought. The main event was a good way to round off a mediocre PPV. Again, the outcome was predictable, but what’s news for UK PPV’s.

UK PPV’s are known for the fact that titles hardly ever change hands. This was no exception, however the PPV was still entertaining. With good matches from The Rock vs. Steve Austin, and Jericho vs. Angle the PPV had most of it bad matches over shadowed. If you are thinking about getting a UK PPV, I say this one was ok. With some DVD extras it might be worth buying.