It was the night when finally every wrestling fan got their dreams to come true as the members of the WCW/ECW team fought the members of the WWF. Would Vince McMahon’s WWF Empire crumble at the hands of his offsprings Shane and Stephanie the current owners of the WCW/ECW team? With the flag ship members of the WWF, Undertaker, Kane, Kurt Angle, Chris Jericho and Steve Austin all taking part in the Inaugural Brawl against the best the WCW/ECW team had to offer, Booker T, Rhyno, The Dudley Boyz and DDP, what would be the out come? The Invasion PPV had all the making of an historic event in the world of Sports Entertainment, would it live up to all the hype and should you go out and buy the Video or DVD? 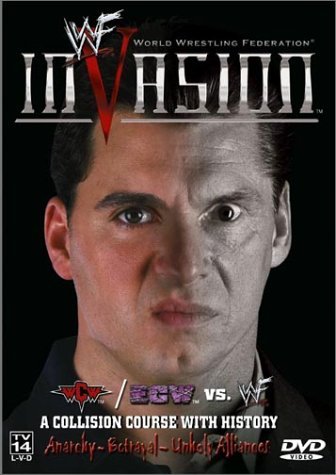 The matches on the PPV card seemed to be pretty good, with the WWF using most of its top talent that they were able to use. Each match had a WWF team VS the WCW/ECW team aspect. And it proved to work in most cases, with the WWF & WCW tag team titles on the line, the WCW Cruiserweight title & WWF Light heavyweight title on the line and the WWF Hardcore title being defended by Jeff Hardy in a ladder match with ‘Mr Monday Night’ RVD the night was set, and would this PPV truly be a ‘Collision Course with History’?

Taking each match into consideration, the PPV had both High’s and Low’s to offer. Starting off with some low points of the night, The Big Show, Billy Gunn & Albert VS Kanyon, Hugh Morris & Shawn Stasiak. This was one of many matches that were there just to fill up the PPV card. This was not very exciting and there was no trace of any wrestling skills at all. The match was made at very short notice, and it shouldn’t have really been made at all, The Big Show and Kanyon were the two best peformers of this match, but overall this match was just to fill a space on the PPV.

Nick Patrick VS Earl Hebner, this match was a little light-relief in the midst of this PPV. After weeks of Nick Patrick costing many WWF superstars matches, it was time for Senior WWF referee Earl Hebner to step in. It was time for these two men to step in the ring and fight for their respective companies. This was not really a wrestling match, but it had a few funny moments with Mick Foley as the special guest referee. As I say this was not meant to be a first class wrestling match, and it wasn’t, it was a funny match and provided a little bit of comedy.

The next low point of the night was Raven VS William Regal, this was not a poor match but it lacked excitement. It had little build up and really should have had a few more weeks to develop a storyline and I think it would have been a good match. With some interference from Tazz the match ended. This match would have been much better without the interference and if there was more time for it to develop.

The final low point of the show is Tajri VS Tazz, this was not really poor, but it again did not possess much excitement. Most of the poor matches on the PPV lacked any decent build up and this match was just placed on the PPV to fill up the time, it was just without any real excitement.

The high points in this PPV are a good variety of different subjects. The first high point of this PPV is the WCW Cruiserweight title VS WWF Light Heavyweight title match, Billy Kidman gives a great performance and X-Pac try’s to keep up with him. Although many fans will not agree with me, I thought that this match was very entertaining especially Billy Kidman, the former employee of the old WCW always give 110%, and this match was no exception. A nice arsenal of moves and a good athletic ability, Billy Kidman gets bigger cheers form the crowd than X-Pac does. All in all this was a great match, but I would have liked Billy Kidman to have fought maybe a more suitable opponent, maybe Jerry Lynn or Essa Rios, but as it stood the match was good.

The highlight of this PPV had to be, with out a doubt the WWF Hardcore title match. I was not a great fan of either Jeff Hardy or RVD, but after this match I have changed my mind slightly. The match was full of “spot wrestling” something which I am not a fan of usually, but I enjoyed this match a great deal. With some excellent moves and ring ability RVD puts on a great performance. Jeff Hardy risks life and limb in an epic battle with RVD, he does some great high-flying spots and some outstanding moves with the ladder. If you are a fan of technical wrestling then this match is not for you, but if you like to be sat on the edge of your seat with batted breath then this match is the one for you, it is the best match on the card, and I enjoyed it.

The main event, the ‘Inaugural Brawl’, with team WWF VS team WCW/ECW, this match was the biggest Inter-promotional match in the history of Sports Entertainment. With DDP, Booker T, Rhyno and the Dudley Boyz fighting for the WCW/ECW, it is not exactly what you think of when you think of a WCW/ECW team, No Sandman, Ric Flair, Sting, Nash, Hall and ……… oh yeah Goldberg. But this was the best team that the WCW/ECW could manage with the others either not interested or on TimeWarner/AOL contracts. The WWF had five of the best, Undertaker, Kane, Kurt Angle, Chris Jericho and Stone Cold Steve Austin, would this be enough to beat the WCW/ECW team? Well the actual match was nothing special. It did not really contain much in the way of excitement or wrestling ability. The shinning star of this match being Kurt Angle of the WWF, giving as always 110%, he showed some good wrestling ability and his fight for the WWF was really shown in this match. With Stone Cold still having an injury from the previous PPV, he was unable to perform his usual best. Never the less Austin performed reasonable in the ring, along with Booker T of the WCW/ECW team. Booker T showed that he could brawl with some of the best from the WWF. The Undertaker focused his thoughts on the man who stalked his wife, DDP. The Undertaker just give his usual performance along with the rest of the competitors of this match. This match was no where at all as good as it should have been, the empire that Vince McMahon had tried to crumble called WCW had a lot more stars than were in this match. The out-come was predictable and looking at this match, it was a major let down, it was a let down on all aspects from Wrestling performance to excitement, it should have been the biggest match ever; sadly it was nowhere near.

After being a fan of both WCW and WWF, and catching some ECW, when I first heard that there was going to be Invasion PPV, I was looking forward to it, Sadly all my hopes and dreams were dashed as the Invasion PPV was nothing more than a glorified average ‘In Your House’ PPV. The high light of this PPV was the Hardcore title match; mainly the other matches were dull and boring. This PPV should have been the pinnacle of Sports Entertainment, it should have been the biggest inter-promotional PPV, and it should have been good, it was not. Maybe my hopes and expectations were too high, but never the less, this was a disappointment. Even the DVD extras were nothing special, If you want a piece of Wrestling history then I suppose this PPV is worth buying, if you want a good PPV though, avoid this.