REVIEW: Godzilla vs. Kong is exactly what it set out to be, thin as that idea is

Godzilla vs Kong is another in a long line of “versus” films, a subcategory in the Kaiju film genre that often depicts impossibly large and monstrous creatures battling it out for dominance against other, equally monstrous (but somehow more eeevil) creatures.

Opinions on the three films preceding this have been mixed. The first film in this new series, Godzilla (2014) was, in my opinion, the best of the four, because it tried its best to tackle a human story with the monster as a backdrop. Unfortunately, the film was criticized for not showing enough of the monster. I didn’t mind the amount we saw Godzilla, because I subscribe to the “too much ice cream” rule (that being, “you only think you can never have too much ice cream, until you have too much”).

The follow-up film, Skull Island, was much more warmly received. I, on the other hand, hated it.

Audiences loved it because it had tons more action. I didn’t mind the fighting so much as I loathed the human element, which was non-existent. There was a thin Vietnam parable slapped onto it, but the whole thing was lazy, cliched, and terribly written. Honestly, it’s some of the worst dialogue I’ve ever sat through. But people don’t care about the screenplay when the movie is just “monster go punchy.”

Then came the follow-up, Godzilla: King of the Monsters, a film that tried again to put a human plot in the center of the action while also capitulating to the desires to see Godzilla do Godzilla stuff. Unfortunately, the human stuff was done even worse here than in Skull Island. Every line of dialogue was exposition, every character decision was convoluted, and every big twist landed with a dud-thud.

The worst crime perpetrated by King of the Monsters is that it burned through Godzilla’s entire rogue’s gallery, save two (Mecha-Godzilla and King Kong, hmmm), essentially kneecapping future films all in the service of one sequel, this month’s newest release… 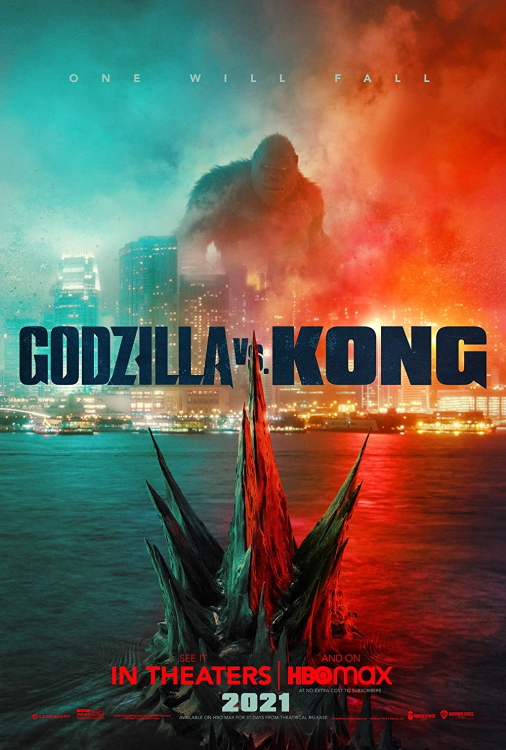 Was it worth it? Was it worth neutering an entire potential franchise of Godzilla films just to have a “versus” movie, roughly four years after the subgenre peaked with Marvel’s Civil War and DC’s Batman v Superman?

First of all, I want to be clear: I don’t want to judge this movie harshly. It’s not like I have it out for Kong movies or Godzilla movies. On the contrary, I love the original King Kong and the Peter Jackson remake. I love the original Godzilla and have a soft spot for its cheesy sequels. I also think Shin Godzilla is one of the best Kaiju movies ever made. I also recognize that this movie isn’t trying to be a “film.” It’s popcorn. It’s fluff. It is what it is and does what it sets out to do.

But darn it I can’t help that I HATE forced exposition dialogue, and that’s all there is in the film’s prologue…and the whole rest of the movie, too. I can’t help that I hate when the dialogue is talking to me instead of talking between the characters, or when characters make decisions that make no sense, or when movies break the rules of their own universe with no explanation, or when villains monologue at the obvious worst possible times. I hate all these things and only love it when movies hang a lampshade on them. This movie doesn’t hang lampshades (it doesn’t draw comedic attention to all the tropes it is relying on), nor does it keep its tongue firmly in its cheek and have fun with its premise. Instead, it acts super serious about it all, expecting me to take it seriously too when it is obviously just a dumb movie written by people content to do the bare minimum because “people only care about the monster fights anyway.” I hate that level of laziness. 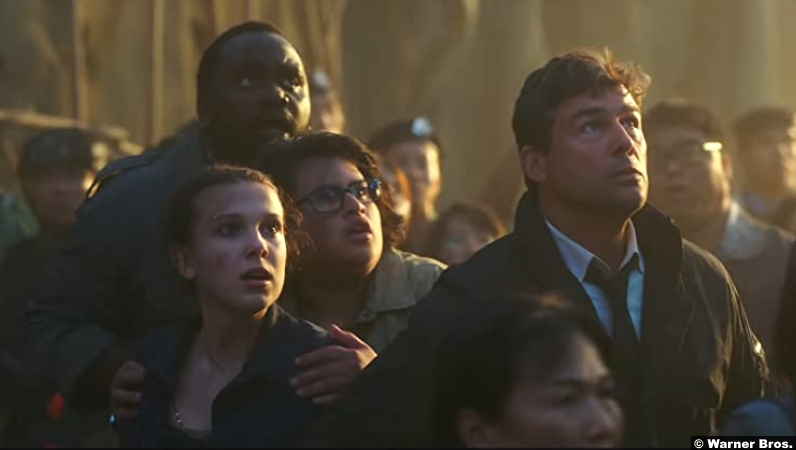 Basically, the human characters are the worst part of the movie. The challenge, therefore, is for the director to make the humans at least tolerable while we wait on the punches and bites and stuff. Instead, the best character in the movie is a little girl who is only tolerable because she is deaf and therefore completely mute. Everyone else who speaks only does so in one of three ways. Every line of dialogue is either a joke, the set-up to a joke, or badly-delivered exposition.

Two plots are running through the film, which we will call plot-A and plot-B.

Plot-B features Millie Bobbie Brown on a mission to discover why the previously helpful Godzilla is suddenly acting aggressive and evil. As it turns out (spoilers here, but you only care about the fighting so who cares), it’s because he senses the presence of King Ghidorah, the fierce monster and arch-rival of Godzilla, who was defeated in the previous movie. At least, I think that’s why Godzilla is angry. The movie doesn’t ever make that connection but it makes sense (which is probably why the movie doesn’t make the connection). Instead, the film just implies Godzilla senses Mecha-Godzilla and wants to destroy it before it comes online. Mecha-Godzilla is being powered by Ghidorah’s severed head…except it isn’t because the head is just a skull with no brain, even though there are these tubes coming out of it and connecting to a headset that the mecha-pilot wears.

The brain and the skull are not the same thing, but I don’t think the movie knows this. 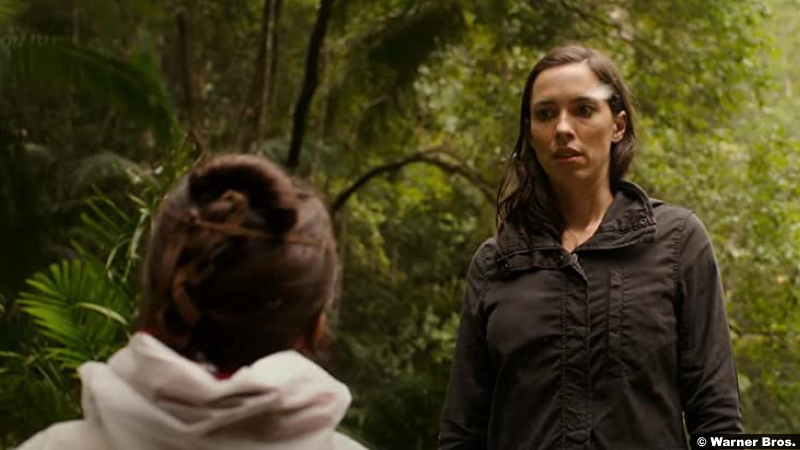 Plot-A features…I don’t remember her name, as she studies Kong on Skull Island (encased in a Truman Show-like dome). The lady and the deaf girl that keeps Kong chill get roped into a plot by the company Millie Bobbie Brown is investigating (the one that is making Mecha-Godzilla), but really this whole section of the story is like someone was workshopping a new version of Journey to the Center of the Earth and just sort of slapped it into the movie because all of a sudden there are flying cars and lasers beams and trips to the interior of the “hollow earth” where dinosaurs live and where there are all kinds of sunlight even though they’re in the earth’s…center, and they get there by passing through some kind of a portal in the arctic…

That’s not how the earth works!

Meanwhile, Kong does sign language, which at first made me think of…

But then they basically told us that Kong is capable of signing as eloquently and intelligently as a normal person, knowing and learning words seemingly on the fly, and that made me think of that stuuuupid and very fake commercial about the primate carrying on a convo with a deaf girl, telling her that her peanut butter was killing the rainforest or whatever. This nonsense…

Signing primates do not have the intelligence that is displayed here. Anyway, that’s what I thought of watching the deaf girl tell Kong “Godzilla is your friend, not your enemy” and somehow Kong knew what “Godzilla” meant and could understand the sentence in the first place. When he signed the word for “home,” okay, I’ll allow it, but the shark was jumped by the end of the movie.

But none of that matters, does it? None of the screenplay laziness or the plot contrivances matter because all we’re here for is that sweet, sweet kaiju on kaiju action, and in that respect, the movie delivers. There are three big fights in the film, one featuring Kong vs Godzilla in the water (winner: Godzilla), one featuring Kong vs Godzilla in Hong Kong (I think), and man do they wreck the place (winner: Godzilla again…uh…) and the last featuring Godzilla teaming up with Kong to take down (a way too skinny and weirdly long-armed) Mecha-Godzilla (winner: Kong, who gets the big win in the end to balance the scales). My problem with the action in the finale is it ran a bit too long. It started to feel like the Superman vs Zod fight in Man of Steel. After a while, it’s just two video game characters destroying buildings. 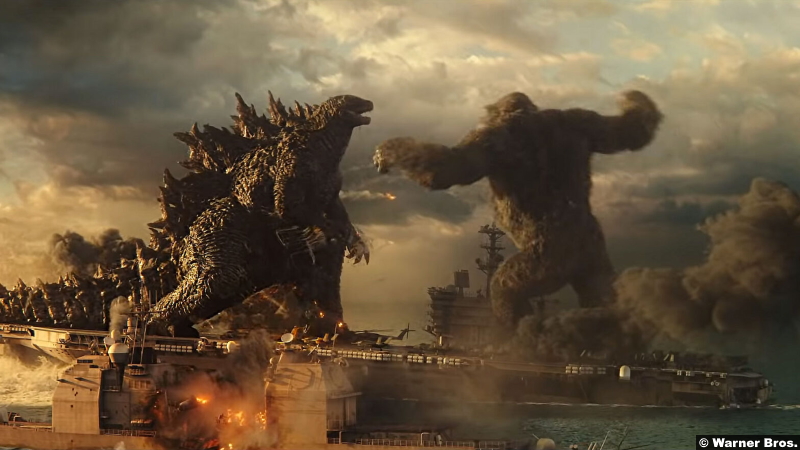 But that’s what you pay for so…there it is. Mission Accomplished.

6/10  – The soundtrack features a mid-70’s Elvis track. That was nice, but the “hole in the earth” gimmick was done better in that one episode of Angel season 5. Just saying.