Well that was a wet fart.

Sometimes you can just feel when a movie is going to be a big hit, no matter how unlikely it should be as a success. Guardians of the Galaxy, for example, is a movie staring a wrestler, a side character on an NBC comedy, a giant tree-man and a talking racoon. No one knew what to make of it and many were thinking that Marvel had let their ambition exceed their common sense. Then the first trailer hit and everyone just “got it.” From then on the movie was almost-destined to be a smash, and it was.

And then are those movies that look like they are duds and the studio seemingly knows it too. Bye Bye Man was moved from October (primetime for horror movies), to June (reserved for the cream of the crop summer films where it was sure to get lost), and then moved again to January (where movies go to die). All signs pointed to the film being a stinker and it delivered on that promise in stellar fashion.

But the most tragic of all, is when a studio makes a movie they clearly are jazzed about. They give it a big advertising budget, they talk it up to shareholders, they ambitiously plan for multiple sequels and they strut like a peacock to opening night, ready for their movie to blow everyone away.

Instead it just blows. 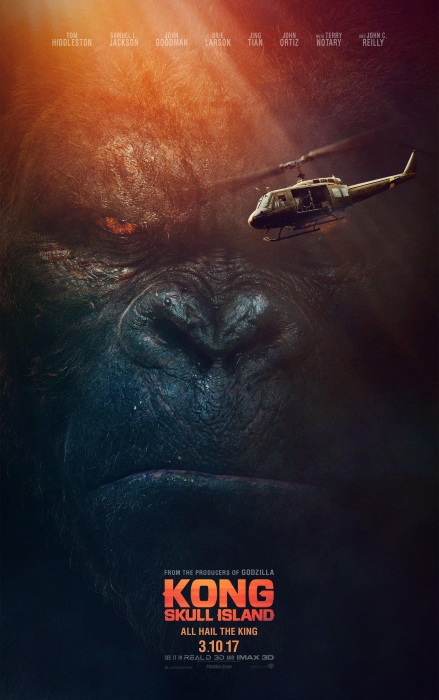 KONG: Skull Island (henceforth just KONG) is the second movie in a planned-shared universe of films based around Godzilla, King Kong and various other kaiju properties. The first was 2014’s Godzilla; not to be confused with, say, Shin Godzilla, which came to limited western theaters but was mostly an exclusively-Asian property. KONG is a follow-up (though set in the past) to the Godzilla movie that Legendary Pictures produced a few years ago. That movie was a good-enough reboot of the franchise that some criticized for focusing too much on the human characters and not enough on the titular monster himself. When the movie did finally show Godzilla, it was mostly through obscured angles. The best look we get of him was…at night…in the rain.

The team behind KONG heard those complaints and properly ran as far in the other direction as possible. The result is a movie with no discernible or memorable characters to speak of, but with plenty of hot monster-on-monster action to satisfy the crowd of ticket buyers that keeps Michael Bay employed.

Only Michael Bay didn’t direct this. Jordan Vogt-Roberts did, as his first major film. It’s quite a lot to put on a first-timer, expecting him to continue the momentum on a still-young shared-universe (whose connection hasn’t even been explored yet), while also telling a story that does justice to its namesake (King Kong is the original monster movie, filled with action and pathos in equal doses) as well as being a good film on its own. How does he do?

There are three big problems with this movie and one redeeming virtue: The acting is terrible, the beautiful environment is frustratingly filmed, being hidden behind many tight shots, the screenplay is horrendously, staggeringly awful, but—on the plus side–the action scenes are impressive to behold.

On the subject of the acting and the wasted environment, those failures fall squarely on the shoulders of the director. Granted, not everyone can be Michael Fassbender or Oscar Isaac out there, but that just means it’s up to the director to help them get the best performance out of the actors as possible. Corey Hawkins and Toby Kebbell (who keeps getting cast in movies despite never impressing) need all the help they can get…and get none. Lines are delivered like they never read the script and just had someone off screen radioing them the lines for them to repeat on camera. Everything is flat, stilted, disconnected from the movie. Expressions don’t match up to the words being said; characters crack jokes with faces that are trying to convey dread or panic. That’s on the director.

And then there are the established, well-known and proven to be great actors. Richard Jenkins is a good actor; great even. He has one scene in this movie and it’s wretched. He moves around the scene like he doesn’t know where the camera wants him, because the man behind the camera isn’t giving him any guidance. Sam Jackson does okay but he really only has two roles in all his movies; he’s either “good guy Sam Jackson, cool and in control” or he’s “bad guy Sam Jackson, unhinged and rage-filled.”

But then there’s John Goodman. As much as I love him (he deserved an Oscar nomination for 10 Cloverfield Ln.), this was one of the worst performances he’s ever given to a movie. And it’s not his fault. The screenplay required his character to spend the first 30 minutes rambling on with meandering, exposition-heavy lines. In the right part, John Goodman can be phenomenal. But you have to play to his strengths and minimize his weaknesses. Goodman’s voice is a tricky thing; it’s always had a kind of throaty, grating sound to it. It works fine when he is given short bursts of dialogue, but when he has to ramble on and on, it hurts. Also, every line of his sounded like it was dubbed in post-production. That’s common when you’re on location and there’s too much ambient noise to capture the dialogue from the shoot, but the early scenes take place in offices and hallways, yet Goodman sounds like his words were rerecorded via ADR (Additional Dialogue Recording). He always sounded like he was recording lines for a commercial. Again, that’s not Goodman’s fault. He’s been a pro for thirty years. He shouldn’t ever be this bad. 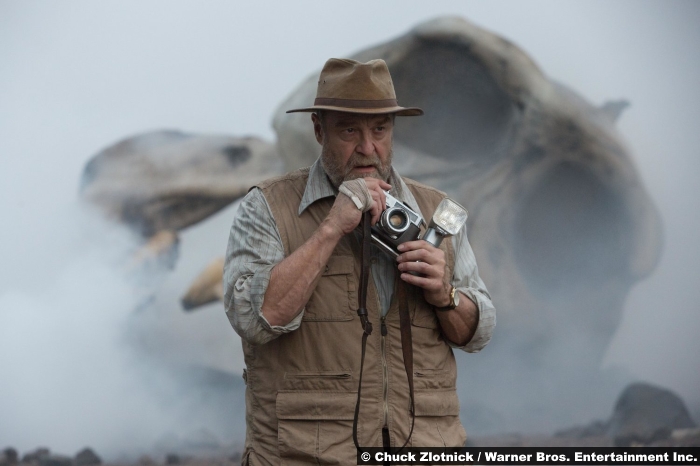 Other than that, there’s the matter of the look of the film. A lot of this movie was filmed outside of the sound-stage, giving the environment a natural feel that you can’t replicate (you can only supplement) with computers. But for some reason, Vogt-Roberts kept the vistas in the background and focused the camera in tight on just the faces and upper bodies of the characters. Occasionally we’d get a bit sweeping shot, but rarely (if ever) was the environment allowed to be a character along with the cast. Instead, there’d be a big establishing shot of the gorgeous surroundings, and then whenever characters would talk, everything would be shot tight on their dead, expressionless faces. 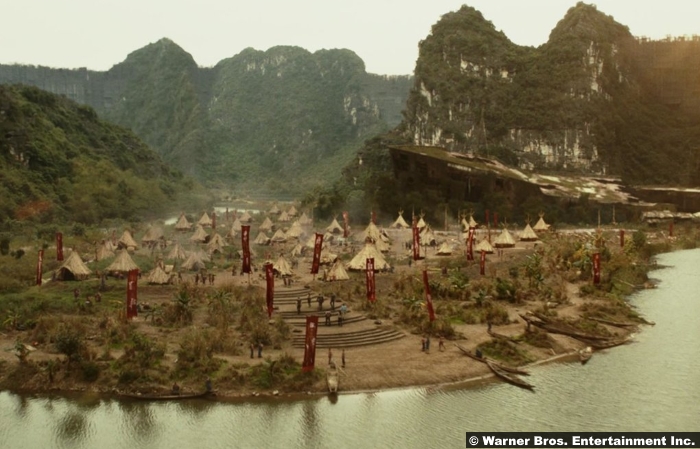 And speaking of the characters talking, there’s the matter of the screenplay, which is laughably bad.

Three different people (not a team of three) are responsible for this mess of a story, one of whom is an Academy Award nominee (but then so is Akiva Goldsman, and he still has to wear Batman & Robin around his neck like a badge of shame). The script in this movie breaks the two major rules of screenwriting: Give me someone to care about and give me a reason to care about them.

The biggest problem with the story is that there are too many characters, with too little to do, and not one of them is the clear and obvious person to rally behind as the audience. As a result the audience becomes an emotionally-uninvested spectator in the goings-on, despite how desperately the movie wants you to feel and react to what happens. It’s one thing to have moments of drama and loss in an action movie (and in fact, it’s good to have those moments, otherwise the action grows boring), but when the audience isn’t given a reason to care about the characters or if those characters die in pointless ways, it makes the ham-fisted, slo-mo scenes of sadness and poignancy tedious.

This movie had characters you won’t care about dying, making their deaths wasted…AND those same deaths will occur in pointless ways. It was almost a running gag by the end of the movie, as characters hoping for a noble sacrifice are squashed like bugs, unable to die for any real purpose. And yet I’m supposed to care? That’s not how it works. 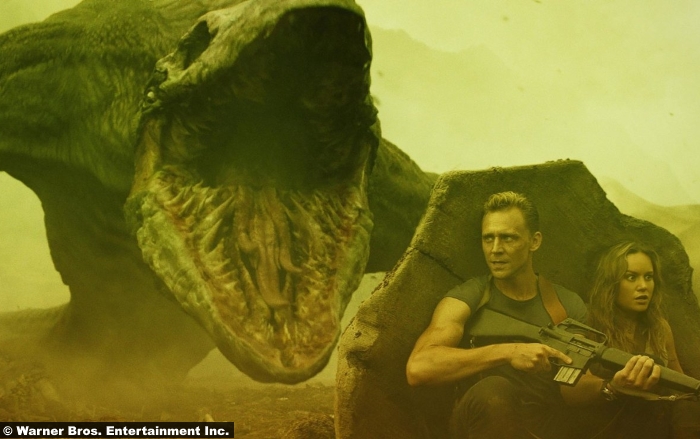 Furthermore, all of the deaths in the movie happen to characters that are either bad guys (in which case, you’re supposed to root for their demise) or good guys with so little to do in the movie that their deaths will mean nothing. Again, if the cast of a literal dozen was cut down to, say, six or seven, then so much of that spread-around dialogue could have been consolidated into fewer characters, allowing the audience to bond with them, making their deaths a little more poignant. The only time in this movie, where a death might have had some resonance was with the only side-character given any kind of background. But in his case, he was so terribly written and forced to spout-off cheesy, stupid dialogue, that I didn’t even mind seeing him get got.

And speaking of the dialogue, holy cow was this a badly written movie.

Every other line is exposition, and not the acceptable and sometimes needed kind, where quick little asides are spoken to fill the audience in while the story moves forward. No, this is the really bad kind of exposition, where the whole movie just stops while someone plays the part of narrator, walking the audience through the movie step by step. Attempts to lighten up the movie with humor failed as well, with almost every single joke falling flat. But the jokes kept coming, and often at totally inappropriate moments, leading to a tone that is wildly inconsistent. It’s one thing to have comic relief in the middle of a tense action movie (and when done right, it’s great) but this went so overboard with the bad jokes, the movie felt like a spoof at times.

Despite maybe fifty jokes of varying sizes, there were only two times that a human character elicited a positive reaction out of me: The first came when Sam Jackson’s character said “Hold on to your butts.” If the best line in your movie is a wink to another, far better, monster movie, you got problems. The other great line came from John C. Reilly, whose character best exemplified this tonally-inconsistent movie. At one point while a group is camping outside, Reilly’s character mentions that they need to be wary of giant ants that sound like birds. Reilly’s word choice, timing and delivery was so effortless I’m convinced it was an ad-libbed moment. It was the only line of dialogue in the whole movie that felt “natural.”

But there are positives to be found, namely when it comes to the monsters themselves. Unlike in Godzilla, King Kong shows up in his movie early, often, and in broad daylight. Various other monsters are peppered throughout the film, and almost all of them are inventive and clever. In fact, the only creature that did not impress me was, fittingly I suppose, the primary “bad guy monsters” of the movie. Their design felt unfinished, generic and bland. 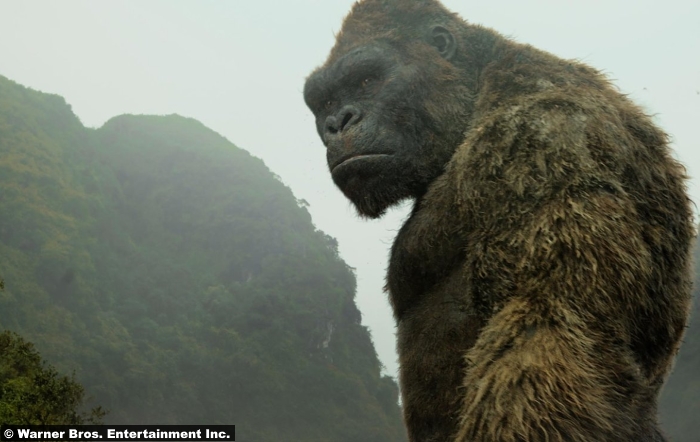 But without characters worth caring about, the big spectacle action scenes lose any significance. It just becomes “noise.” The original King Kong focused on three human characters and one giant ape with more “personality” to be shown and “story” to be told, than anything given to us in the newest version. KONG: Skull Island will probably be the number-one movie this weekend. It will have many people talking about it, but what they’ll be talking about is pretend monsters fighting each other. That’s cool and sometimes legitimately impressive to behold, without any humanity, what we’re left with is a hollow, tone-deaf, terribly written, acted and directed movie.

4/10 – This is a movie you will rent to show off your TV’s new sound system. But after the three or four big moments are over, you’ll be left with not much movie left to enjoy.