Over sixty years ago, Ishirō Honda and Toho Films released Godzilla, a simple monster movie/sci-fi parable about the dangers of playing with nuclear power. As with many instant-hits, there never was any expectation that the movie would spawn a franchise, or that the title creature would become one of the most significant film characters of all time. But that it did; almost as soon as the movie released it became a sensation. Critics naturally lambasted the picture, condemning the movie for, as they put it, exploiting the devastation Japan suffered at the end of World War II. What they missed was that the movie intended to make Hiroshima and Nagasaki an obvious symbol; the film is pure science fiction and science fiction is at its best when it teaches a lesson about the real world using fantastic and imaginary settings. One prominent Japanese critic said the movie was pointless because “such monsters do not exist.” That…kind of misses the boat.

The basic origin story of the monster is that it was a dinosaur that Rip Van Winkled through the extinction, only to be awakened (and supercharged) by the nuclear bombs the US dropped on Japan in 1945. The film’s producer, Tomoyuki Tanaka summarized it, saying “The theme of the film, from the beginning, was the terror of the bomb. Mankind had created the bomb, and now nature was going to take revenge on mankind.” As opposed to King Kong (which was released in 1933), Godzilla is not a creature lost on a forgotten island. It is not brought to the city by the greed of men; it is attracted to the city by the wars of men.

In the original film, the monster only appears a few times for a total of about 8 minutes of screentime. Most of the plot revolves around a paleontologist appointed by the government to investigate the creature. To that end, the film is largely about being in awe of the monster and of the dawning realization that the nation is mostly powerless to stop it. Eventually of course they do, by creating a superweapon that deprives it of oxygen. The film ends with an ominous warning that other creatures may rise too as long as nuclear testing continues.

There’s a cornball quality to the film but ultimately it lacks a lot of the charm of, say, the original King Kong. Still, it’s not bad. As the movie turned into a franchise the emphasis would shift away from how Japan deals with such a devastating creature and more to the creature itself. As quickly as the second film, Godzilla’s cinematic emphasis would be placed on the monster fighting a fellow kauji, becoming an unofficial protector of Japan.

The series has spawned almost thirty movies in Japan, and—parallel to that—has seen several other American-produced films. Most recently is Gareth Edwards’ 2014 film (“Godzilla”) which serves as the west’s official reboot of the franchise. A sequel is scheduled for 2019, and a third film has already been greenlit as well; it will tie the series together with King Kong (which is getting a reboot of its own next year).

Shin Godzilla, however, is not a western production. It is the next in the long line of Toho films. This one is special, however, from the 28 that came before it. It’s the first time the series has been officially rebooted. Reboots and remakes are overused in Hollywood, but not necessarily in overseas films. For sixty years Toho has been pumping out Godzilla movies, and never before have they reset the whole universe and started over. This is the first movie since the original that doesn’t feature a secondary creature for the monster to fight. It remakes the first film with a new plot and a new origin, while retaining the “sci-fi parable of the modern world” vibe that the original focused on. 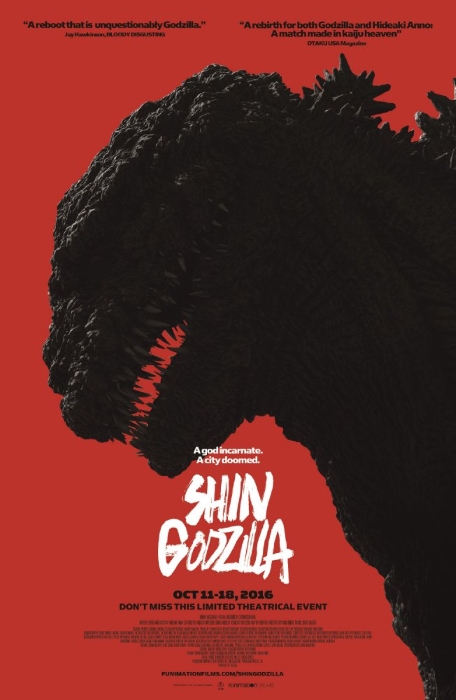 Whereas the first film’s story was about the consequences of toying around with nuclear power, this movie has a different theme: It’s about the consequences of stifling bureaucracy and indecisive, self-serving politicians. It’s the perfect movie to give a limited US release, in these waning weeks of a presidential election (the worst presidential election since Martin Van Buren vs William Henry Harrison). America has been growing more and more steadily fed up with bureaucrats, career politicians, self-serving “leaders” and constant gridlock. Shin Godzilla imagines how such a political climate could handle an attack by a 400 ft. tall monster (spoiler: it can’t).

In the spirit of the original film, the creature itself is featured sparingly. It is first glimpsed, and then revealed in its (hilariously googly-eyed) salamander-like first form. After that we see it evolve into the creature we know and love. It steps on some buildings, repels some bullets and missiles and then just chills for a bit. The next time we see it is in a huge mid-movie action scene where American B2 bombers take a crack at it before getting a taste of the fire breath. There are some really bad special effects (the movie used a combination of CGI and practical effects, but the computer work in particular is terribly poor) but after you get used to it, you’re able to appreciate the positive: The cinematography and film score are breathtaking. In particular is a scene at dusk that features Godzilla burning half of Tokyo; it’s shot from a great distance to give the monster a sense of scale as he towers over the skyscrapers, his fire breath casting an orange glow across the vista. It’s stunning. 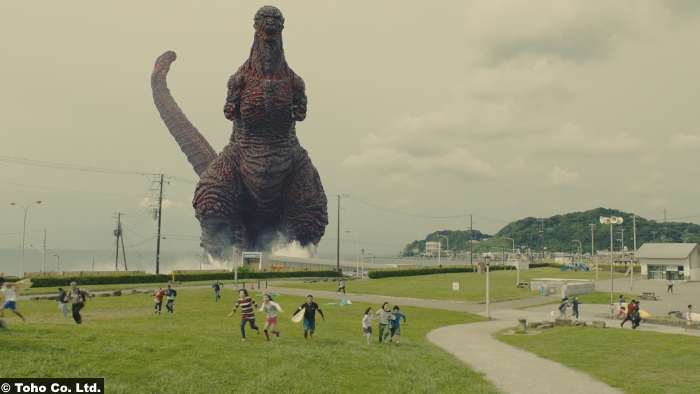 The next time Godzilla takes the spotlight is in the climactic battle, as the Japanese military works to implement a plan to disable the creature before the US drops a nuke on its head. Unlike Edwards’ 2014 film, this climax takes place in broad daylight, giving us a full view of the monster. And though the budget for this film is about a tenth of the 2014 version, the creators here did not try to hide the monster the way Edwards did. It may not be as flashy, but it’s a well-designed creature and you’ll appreciate being able to see him (since, you know, his name is in the title).

As stated, the real focus of the movie isn’t the monster, it’s how the monster affects Japan around it. The leadership of the Japanese government isn’t inept; they’re not bafoons or corrupt, scandal-ridden fiends. But they’re handicapped by their own inability to just make a quick decision. Every possible solution has to be hashed out in a committee, every major action has to be debated. A nice touch to illustrate how deep into the weeds this broken the government is can be seen in the movie’s use of on-screen title cards. Whenever some committee person or special ambassador to some person, or minister of the whatever comes into a room, the movie flashes that person’s official title on the screen. As the film progresses, the titles get longer and longer until finally some guy walks in the conference room and half the picture is covered up by just this guy’s government title.

One critical moment features a fleet of heavily armed helicopters ready to engage the monster for the first time: First the order to engage is given by the Prime Minister, who relays the message to his defense minister, who relays it to the military liaison, who relays it to the person in communication with the helicopter pilot who relays it to the pilot. By this time a few civilians had entered the picture and were scurrying around near where the fallout from the airstrike would be, and since the government had made it explicitly clear that no civilians could be harmed in a government-approved strike the pilot had to ask the prime minister if he was okay to proceed with the attack. That meant asking the communications officer, who asked the liaison, who asked the defense minister who asked the prime minister. The scene plays out like something out of Dr. Strangelove. It’s especially maddening (and hilarious) when the camera pulls back and you realize that 3/4 of the people relaying the message are all in the same room; people are literally turning their heads to ask the person next to them if they have permission to proceed.

Midway through the movie though, a major portion of the government is wiped out and new leadership is forced to take over. When that happens much of the gridlock and bureaucratic formality is cast aside in the interest of “getting things done before we all die.” Political gridlock may not be as “important” as the dangers of nuclear armaments, but it’s certainly a timely issue. And for that, Shin Godzilla has more to say than 99% of the movies playing today.

This film may not be as big budget and flashy as the USA’s rebooted series, but it stands on its own as a fitting relaunch of the Toho franchise, and a clever (and needed) spoof on the impotency of modern bureaucracy.