You can check out our review of Strange New Worlds’ first episode HERE.

All I really want from Star Trek is for it to be a show that’s about things. I want a show that dares to ask questions, to make me—the viewer—pause and think “how would I handle this situation?” At the heart of Star Trek is a show unafraid to pose an ethical dilemma, and while the crisis at the heart of this one is hardly the most ponderous (the proper ethical choice is pretty quickly understood), I appreciate that the show still took the time to ask “how do we make a good choice without bad consequences.”

Overall, the episode offered a nice blend of TOS’ sci-fi short story writing and TNG’s emphasis on the characters. If it keeps that up it’ll be a Star Trek show unlike any other. The Berman-produced shows all had a particular feel, even DS9 (the odd duck of the bunch) followed the same plot/character balance as TNG, VOY, and ENT. In those shows, plot and character were usually divided on a 70-30 basis, with extra attention given to the character at the center of the plot. Episodes like Yesterday’s Enterprise were rare exceptions. On the other hand, TOS was a completely different production, and it emphasized plot over character in a big way. Episodes like The Galileo Seven were rare exceptions. 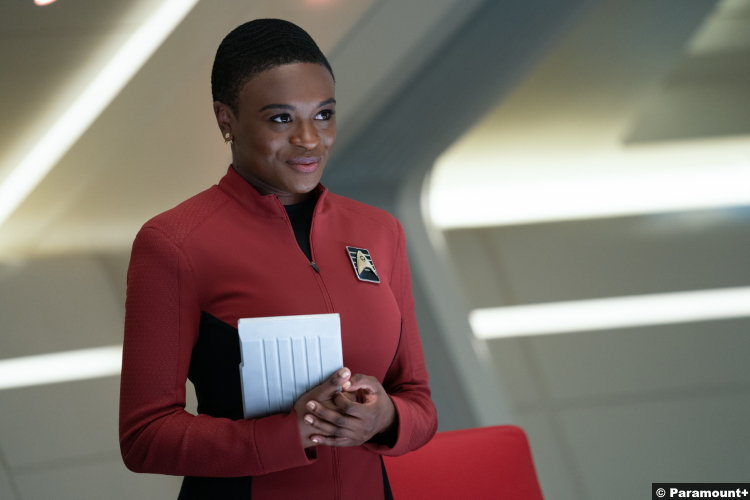 SNW seems to be striving for an even 50-50 split. There is a clear and easily-summarized plot at work here, but the episode isn’t really about the comet, it’s about Uhura and Pike. Both of these characters are the focus, with the former going through an arc where she decides Starfleet is more than just a place to run away to but is, instead, a place to belong. In the case of Pike, there is more exploration of his inner conflict regarding the foreknowledge of his death. He wrestles with the notion of fate, an idea that comes full circle at the end of the episode when we learn whoever sent the comet possessed some means to know the future and plan accordingly.

And even THAT is set up in the beginning of the episode with the Aenar-Andorian chief engineer who possesses telepathic and mild precognitive abilities. 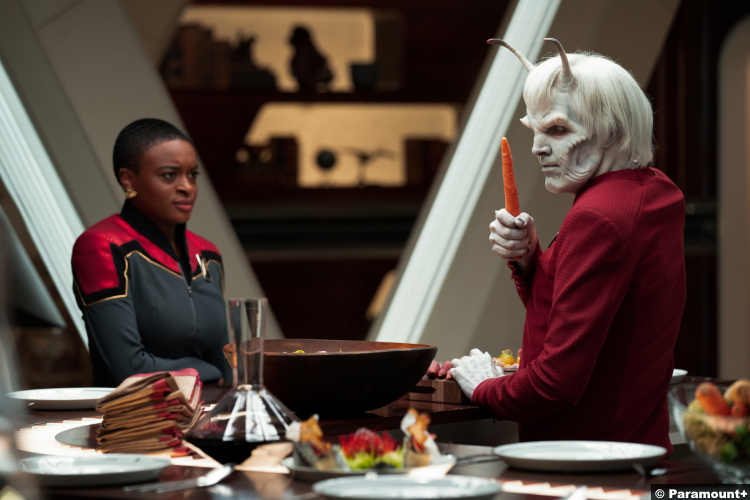 This is maybe the tightest, best put-together episode of Star Trek I’ve seen since the fifth season of Voyager. No wasted moments, most of the humor landed, great special effects, a solid sci-fi story that kept me guessing how it would end, and good development of the characters.

Speaking of: Pike, Una, Spock, La’an, Ortegas, Uhura, Chapel – that’s seven members of the senior staff/billed cast that I can name. I might’ve spelled one or two wrong but I know their names. The chief doctor’s name I can’t yet recall, and the chief engineer I don’t yet know. That’s it. I know seven of nine (heh). The point? If you put a gun to my head and asked me to name the Discovery crew…

Michael, Saru, Tilly, Stamets, uh…robo lady? I got nothing.

I know this cast and crew. I can describe their personalities. I can anticipate how they would respond to a situation. I know them after just TWO episodes. That used to be expected with Star Trek, and now, finally, it is again.

9/10 – Children of the Comet is a well-made hour of science-fiction and a darn good episode of Star Trek.

If there was any doubt left that Strange New Worlds was the best Trek show since Voyager, episode three ended them. Despite the fact that it is the weakest of the three episodes we’ve gotten so far, there is enough to praise in the story, character work, and overall presentation that gives me supreme confidence in the show going forward. The episode isn’t perfect, but it does a lot right.

That said, I have three complaints that hold the episode back from having a higher score. 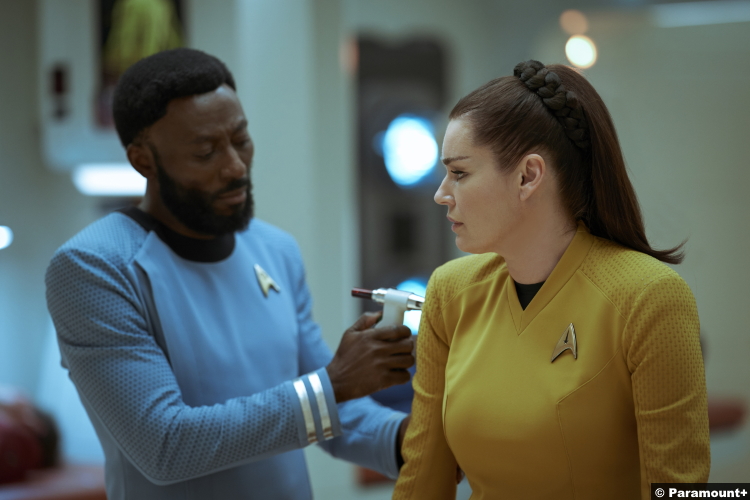 The first issue is with the rushed ending. The plot revolves around a virus spreading across the ship and there are clear and obvious parallels to the COVID-19 pandemic but, thankfully, those allusions are left to the subtext. Not once do the characters stop, look at the camera, and lecture the audience about proper quarantine procedures, etc. This show is cleverer than that. The A-plot concerns the crew on the ship as they handle their business, working the problem/mystery. The trouble comes with the resolution; the plot is resolved basically off-screen, robbing the audience of the satisfaction of seeing the tension of the episode play out. The resolution makes sense in a sci-fi way (which is the best kind of way), but it’s handled via exposition; the episode tells instead of shows. I wanted five or ten more minutes to actually see the resolution play out in some way.

The other complaint is smaller but concerns the B-plot: Pike and Spock are stuck on the planet with nothing to do but banter (which is great) and try and withstand an apparent attack from alien light-monsters. On the one hand, I appreciate the way the B-plot services the A-plot but, on the other hand, there just wasn’t enough going on. Every minute spent there, apart from the great back-and-forth dialogue between Pike and Spock, was time wasted from the more intriguing things happening on the ship. I needed more than just standing in front of a window, watching pensively as presumed bad guys bang on a door.

Finally there’s the central plot point of the episode: Una is an Illyrian. My reaction to which was…

The episode stakes its dramatic claim on the fact that I’m supposed to care but I simply couldn’t. It never works when a show (any show) introduces a potentially-damning bit of backstory to a character, threatens said character with it, and then resolves it all in the same episode. The intended drama rings hollow. In this one episode we learn (A) Illyrians are “bad,” (B) Una is an Illyrian, (C) Una’s secret is outed, (D) Una decides to resign, (E) Pike says “nah,” and that’s that. It would be one thing if the secret was played out in the background of several episodes and then came to a head here, or if the longstanding illegality of the Illyrians was known and established before this episode; that would have provided genuine dramatic stakes. Instead, it’s brought up and resolved all at once, undercutting whatever dramatic weight that it was supposed to carry. 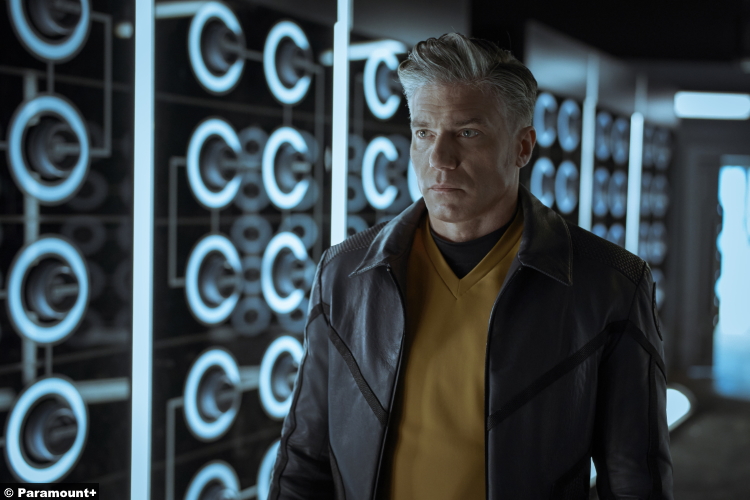 The episode ends with a rather long coda where we learn Chief Medical Officer M’Benga has a secret of his own. It’s too early to judge that storyline as it’s only just beginning, but at least it’s introduced to us here so that, when the show revisits it, it will do so with a bit more weight to the drama.

8/10 – Ghosts of Illyria felt like a solid TOS outing with modern production values. It wasn’t an epic “event” episode, but it was a solid, fun, forty-five minutes of Trek. That’s all I’ve wanted for five years now. I’m happy to have it.

I kind of wish we were getting 25 of these per season, like in the old days… 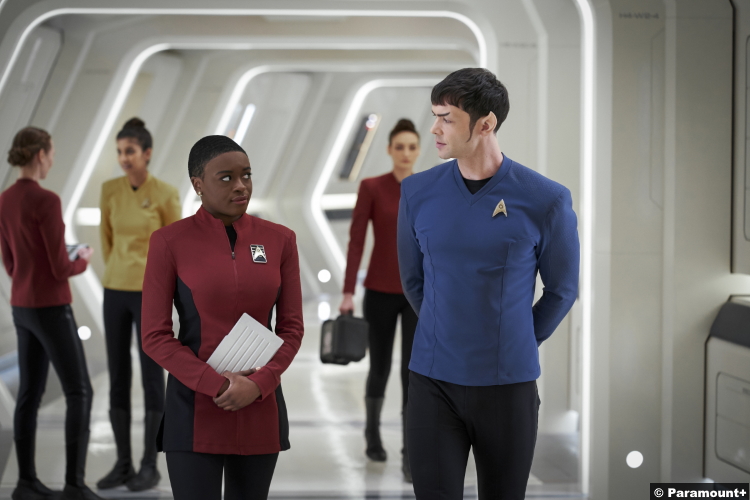