After last week’s incoherent maelstrom, the show really needed to pull off a miracle here.

And it kind of did.

Except that it also really, really didn’t, if you think about it even a little.

Still, this review isn’t going to be as much of an…ahem…unhinged rant…

Let’s get into it.

We begin the episode with the characters standing in the Chateau having a conversation.  Picard notes that he remembers stories from when the Picards re-occupied the Chateau during the 21st century.  “These are the same bullet holes.”  The show sets up the entire season as a predestination paradox – everything that occurred has already occurred and their actions didn’t change the past. 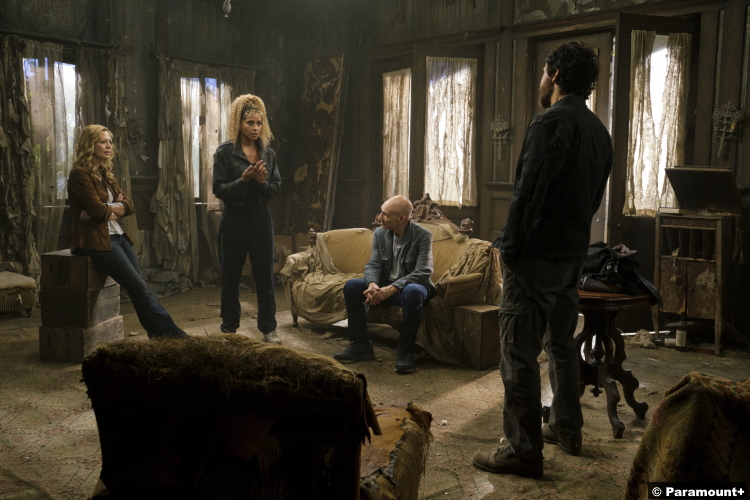 No butterflies then.  That’s fine.

Did the Chateau also have the screaming dead bodies of Borg drones smooshed into the walls of the basement?!

Onto last week’s Big Pronouncement:  There must be two Renees – one who lives and another who dies.  Tallinn already somehow knows she has to sacrifice her life, and well, that’s exactly what she does.  I didn’t hate the scene between Tallinn and Renee, where Tallinn revealed her true purpose to a shocked Renee – it was kind of touching, seeing Tallinn get to express to Renee exactly what it meant to have a guardian angel. And the fakeout with Tallinn disguised as Renee and taking the bullet for her, it was…easy, but fine.

Meanwhile, our other heroes, Raffi, Seven and Rios, beam into Soong’s evil lair to find what is essentially a time bomb – drones designed to kill the shuttle if Soong’s plan to kill Renee failed.  The scene plays out exactly as you’d expect, with a very convenient countdown clock, but there’s some good stuff from Rios when he gets control of one of the drones and uses it to kill the others.

Soong comes back to his lab defeated only to discover that Kore is somehow using a VR headset to remotely wipe all of his files.  He then ups his Bond villain cred by pulling out a secret file called “Project Khan.”  I really, really dislike how they changed that character from a kind of nuanced “dad with an impossible problem” to a straight-up Bond villain.  It just felt kind of cheap. 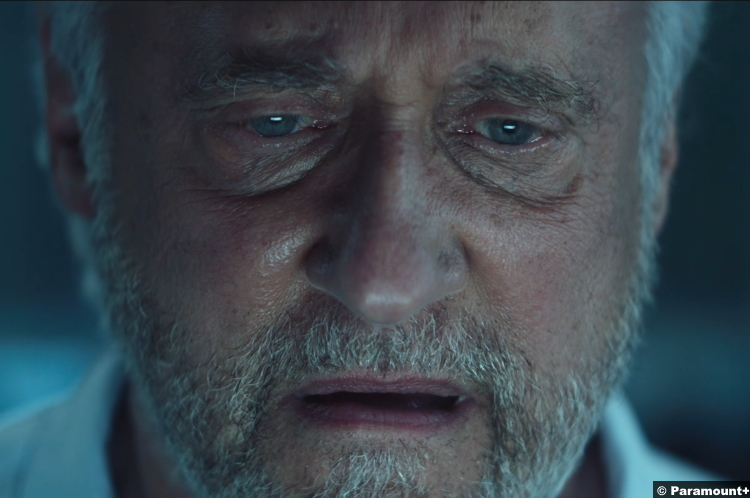 Still, maybe now we have an in-universe explanation of why half the characters in Trek are named “Noonien” something – there’s a connection between Noonien Soong (the guy who created Data and Lore) and Khan Noonien Singh, and Adam Soong is that connection.  That’s kind of cool.

Side note: I watched this episode after watching the first episode of Strange New Worlds, which was…pretty darn good.  Matthew on this site will review that episode, but I do want to connect some of the lore here.

SNW SPOILER
SNW has a great scene that ties up all the loose ends of what the 21st century looks like in the Trek universe.  The “Eugenics Wars,” which in TOS happened in the 1990s, have clearly been retconned to the 2030s or so, after the “Second American Civil War,” but before “World War III.”  That’s all fine, and it lines up pretty well (well, as well as it can line up) with previously established canon.  God, I really want to say more about SNW here…anyway.

This season of Picard takes place smack in the middle of all of that chaos, and the show, despite its glaring flaws, has done a pretty good job of slotting itself in there.  But what still doesn’t make a lick of sense to me is this.

Renee Picard goes to Europa, finds a thing that helps “clean up the air and the oceans” and yadda yadda…Federation.

But what really happens is this:  Renee Picard goes to Europa, finds a thing [INSERT SEVERAL GLOBAL CATASTROPHES] … that helps “clean up the air and the oceans” and yadda yadda…Federation.  When does the thing she finds help?  Is it after World War 3?  It’d have to be, right?

Alright, so.  The rest of this Picard season finale.

There’s a neat – ok, honestly, this scene was kind of delightful – cameo from Wesley Crusher, who as we all suspected now goes by his Traveller moniker from TNG, and he recruits Kore into his organization – which, incidentally, is also the group that coordinates the “Supervisors” like Gary Seven and Tallinn.  I kind of dig that lore connection, not going to lie. 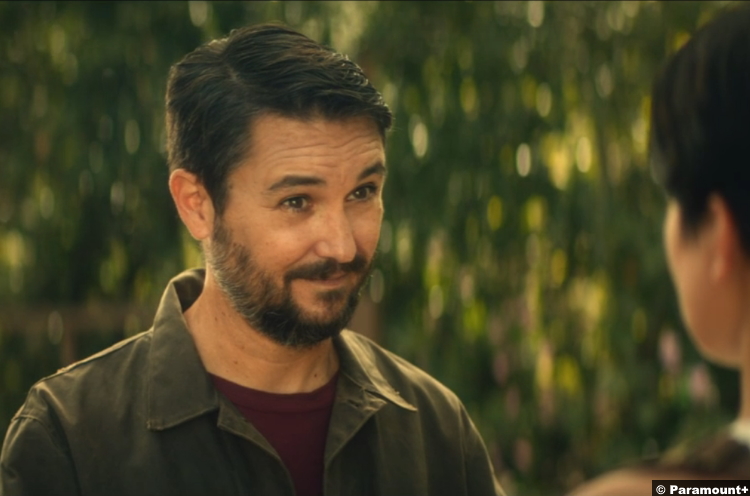 There’s a great, beautiful kiss between Seven and Raffi.  Trek has come a long way since Rick Berman and crew squashed any mention of LGBTQ issues on TNG, DS9, Voyager, and Enterprise, and the show is to be applauded for that.  Between Seven and Raffi on Picard and Stamets and Culbert and Adira and Gray on Discovery, Trek is really walking the walk now.  And the queer community needs representation now more than ever, with far-right hateful terrible people accusing us all of “grooming children” and other hideous lies.

The crew is resigned to hunkering down in the 21st century and trying not to affect the past.  Rios is fine with this, actually, because he’s planning to stay with Dr. Teresa.

Enter Q.  And this is a very different Q than we’ve been dealing with all season.  This Q is pensive, thoughtful, and he explains his whole thing to Picard.  Q wanted Picard to forgive himself for the death of his mother, to allow himself to be emotionally vulnerable for the first time in his life.  Q is dying…alone.  That’s what matters to him.  “Even Gods can have favorites,” Q says.  Q genuinely loves Jean-Luc Picard, and in his capital-I Idiosyncratic way, Q was just trying to get Picard to learn that he shouldn’t die alone.  So this whole season, the bad timeline, all of it – it was all just Q trying to teach Picard to forgive himself.  Honestly, it’s a good scene between the two of them. 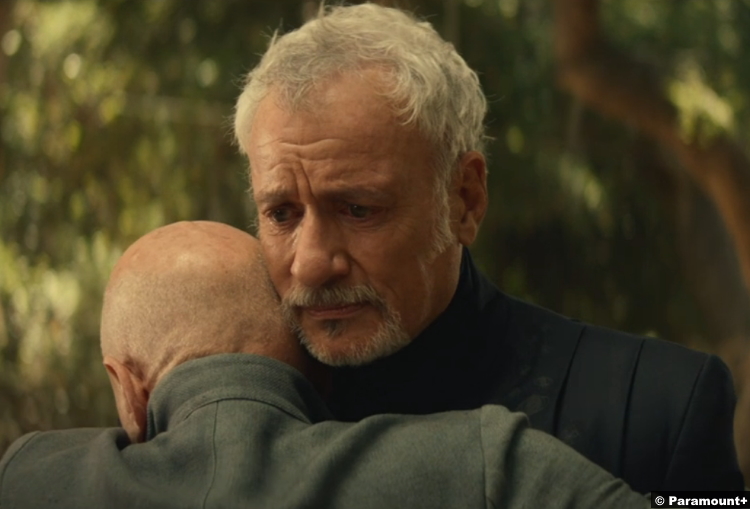 The following scene when Q surprises the crew and sends them Back to the Future – the hug that Picard offers Q, and the look on Q’s face…it works.  It’s good closure for that character’s arc.

And now we’re back to the moment on the ship right before the self-destruct.  Picard cancels it, and we hear Non Je Ne Regrette Rien – which takes Picard back to his childhood.  He knows who’s behind the BQ’s tentacles and mask – it’s (duh) Jurati, and the whole reason she needed to commandeer Starfleet’s entire fleet is because of some giant space MacGuffin that is about to obliterate this entire quadrant.  It’s not explained exactly what it is, but my guess is it’s the blind idiot god Azathoth yawning or something.   In any event, the only way to defeat the space MacGuffin is for all of the ships to coordinate their shields with the Borg’s help, and so that happens.  There’s a nice moment where we get confirmation that Elnor is back alive.  Boom, universe saved, past is past, future is perfect, the Borg are provisionally Federation members?!?! 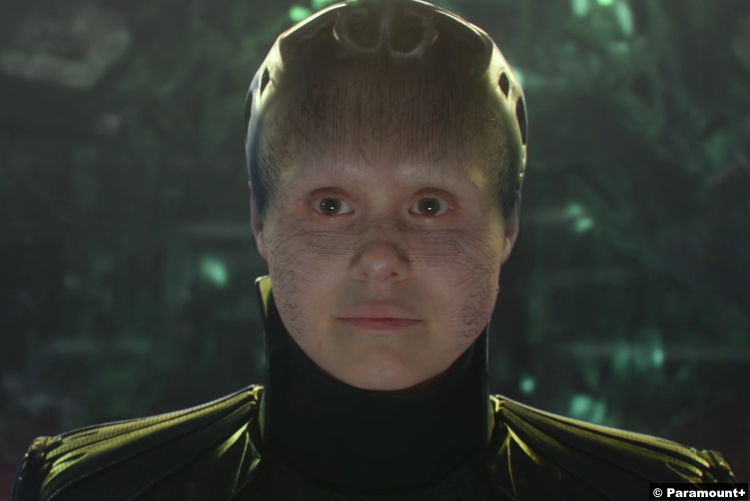 There’s a nice closing moment with Guinan where she (like she did in Time’s Arrow) explains why she couldn’t tell Picard about this particular temporal adventure.  And a nice bit of closure for Dr. Teresa and Rios, back in the past.  And a nice bit of potential closure between Picard and Laris.

Wait a minute wait a minute wait a minute…ah hell the Guinan timeline is all kinds of screwed up.  I can’t even…ok, so in the original timeline Guinan first meets Picard in the 19th century.  In this season of Picard, Guinan hasn’t met Picard yet in the 21st century because the Enterprise didn’t go back in time to the 19th because of the Bad Timeline (although Spock still somehow neck pinched the punk on the bus in 1986, which…whatever).  But then when the Good Timeline is restored, does that mean Picard did meet Guinan in the 19th century again, and if so, what does that mean for Picard and Guinan’s interactions in this season of Picard – did she remember him or not?  Which timeline does Guinan remember?  Clearly the one after this season of Picard, but…what…my head hurts. 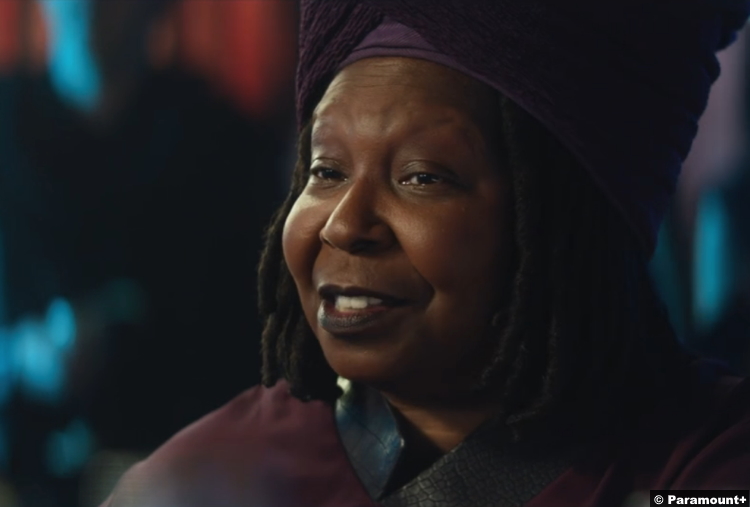 So I’m going to give this episode a pretty high mark just because it did a decent job of wrapping up what was a really uneven clunker of a season.  But if we examine the in-universe consequences of what actually happened this season, it sort of all falls apart.

If in the 21st century, BQ Agnes contacted the Borg Collective and then spent 400 years trying to get the Borg to be…I don’t know, nicer?  I think?  How then does that change the timeline of all of Trek since Q Who?? What happens when Q flings the Enterprise toward the Borg and they encounter a “kindler, gentler Borg?”  How is the Borg even a threat, and how does that change…all of Trek after that episode?  The Borg were always a menacing, implacable foe, rolling over systems with cybernetic precision and brutal efficiency. That was the WHOLE POINT of why Q flung the Enterprise out there.  Would Q still even have done that, if the Borg were a warm and fuzzy collective now? What now is the Borg?

Did Picard ever become Locutus? Did the movie First Contact happen?

How did Voyager get home? Was Seven ever even assimilated?

What of the Artifact from the last season of Picard?

I don’t know, and the show probably isn’t going to tell me.

Still though.  Onward.  Next season has most of the TNG cast in it, and I’m crazy excited about that.

8/10.  On the surface, this episode works, but on the whole, this season is…some nonsense. 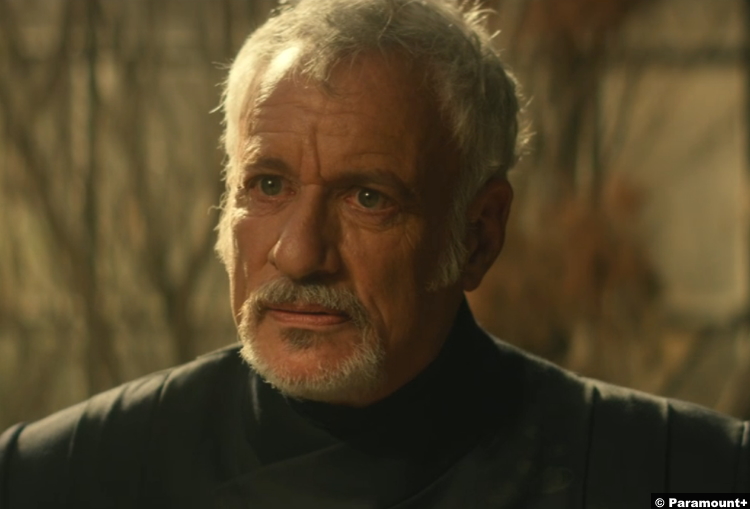