Star Trek Picard S02E09 Review: Hide and Seek – DO WE HAVE TIME FOR THIS CONVERSATION?!

For the love of everything that is Trek and ever was Trek, what the literal hell did I just watch?

Alright, let’s get into it.

Dr. Soong’s Mystery Army of Plot Convenience (MAPC) travels from wherever Dr. Soong lives to France and starts a Commando-style raid on the place.  Conveniently, it’s either foggy enough or sci-fi enough that the MAPC can be easily identified by their bright green laser sights.  There’s also some nice dramatic thunder and lightning for atmosphere.

Rios, still on the La Sirena with Dr. Teresa and her kid for reasons, has to suddenly run to safety after Jurborgti and some of her goons beam onboard.  Jurborgti Borgs herself up and then walks away in slow motion.

Did Uwe Boll write this episode??

Jean-Luc Picard, Seven, Raffi, and the capital of Estonia beam …somewhere on the property, and Picard tells the audience what they need to do (defend the ship no matter the cost – which…obviously). Tallinn has brought guns from…somewhere, and then Rios and his crew appear from…somewhere.  It’s sure nice of the MAPC to give our heroes enough time to make a plan.  As soon as they’re done talking about their plan, they’re all lit up by bright green laser sights and dramatic music says “ooooh nooooo everything’s bad now…”

After the intro credits, Borgati tries to gain control of the ship, only to be thwarted by Jurati, who still has some control.  Somehow, Jurati has managed to make an exact hologram of Elnor?!?!?!?  When did THAT happen???? 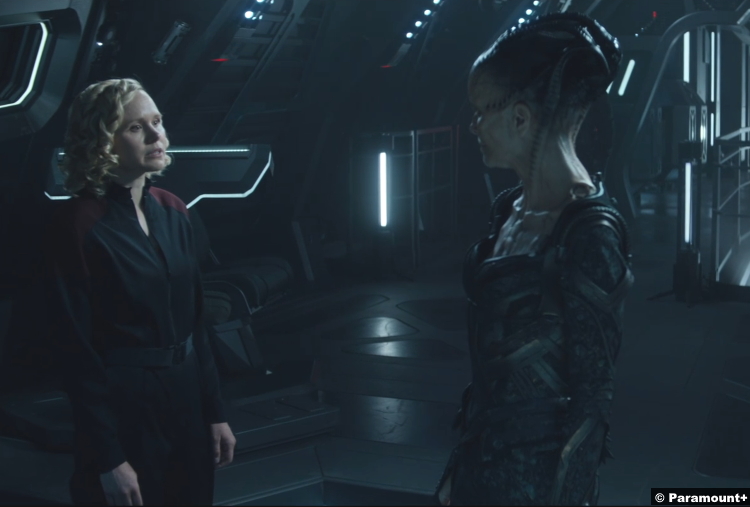 And here we get the first of many examples of do we have time for this conversation???  Ok, it’s a good conversation, a big philosophical deconstruction of what the Borg do and who they are, the nature of time, and blah blah blah, but time after time in this episode, the characters just stop in the middle of an urgent scene and just take time to process shit.

And then Jurati tells the Borg Queen where the key is?!

And then, after the dramatic reveal of holo-Elnor, the goon who’s been conveniently standing there slack-jawed waiting for everyone else to finish up their conversations suddenly leaps into action and is roundly defeated by holo-Elnor. 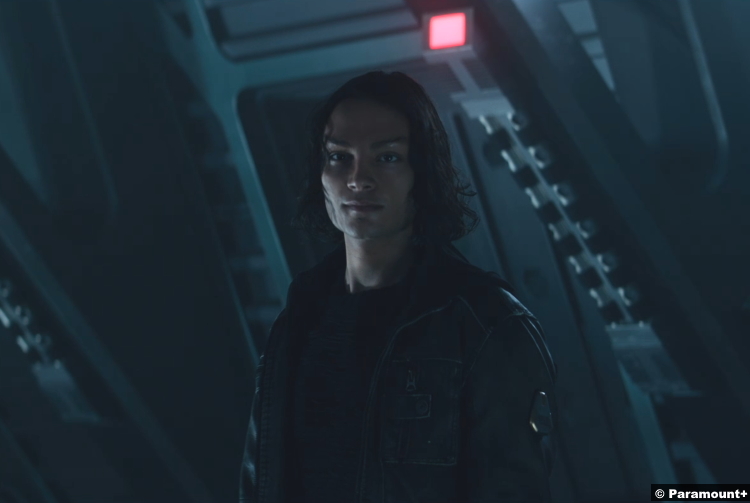 Our heroes outside hunker down in a firefight with the MAPC, and a flash-bang leads to Picard having a flashback – of his mother and father. This isn’t a terrible scene, but damn does it not belong here.  Picard processing his mother’s mental health struggles is clearly something key to this whole season, but the way the show has handled it has been…at times brilliant and at times excruciating.  This episode is mostly the latter.

Back to the firefight, and Rios is injured.  Tallinn beams Rios, Dr. Teresa, and the kid back to Tallinn’s TOS-era decorated office (which is gorgeous, I might add), and then deactivates her fogsporter, so…Rios is out of the action until the plot needs him again.  Points for the cool kitschy retro-futuristic tech stuff in the office.  Not a lot of points.  Not enough to salvage this garbage fire, but points.

“A Borg with advanced technology in this century, can you imagine the damage she would inflict?”  Yes.  And so can you, Jean-Luc.  There was a whole movie about it. You were in it.

Our heroes decide to split the party, which always works well, and then things just get really, really dumb.

So Tallinn lays down suppressing fire, which allows the rest of the episode to happen.

Dr. Soong and Picard yell at each other across a field.  Dr. Soong has turned from an interesting if flawed character into a full on head-waggler Bond villain, and it just suuucks.  And leads to another damn flashback.  Hide and seek.  Find your mother.  Tell her to tell you not to make this episode.

We focus on Raffi and Seven, who have made it into the chateau, and Raffi says “we need to get to the ship,” because that apparently needed to be said.  They have to dodge all the convenient bright green laser sights (nice that those are so visible), but then one of the MAPC comes in and melees with them.  It’s a decently choreographed if absurd fight, and it ends with Raffi and Seven working together to push a knife into the MAPC and kill him.  They dodge some more bright green lasers, and then…

We focus on Picard and Tallinn, who are looking for the secret entrance to the tunnels.  A bright green laser sight appears on Picard’s head, but the shooter conveniently waits just long enough for Tallinn to shoot him, so that’s good. 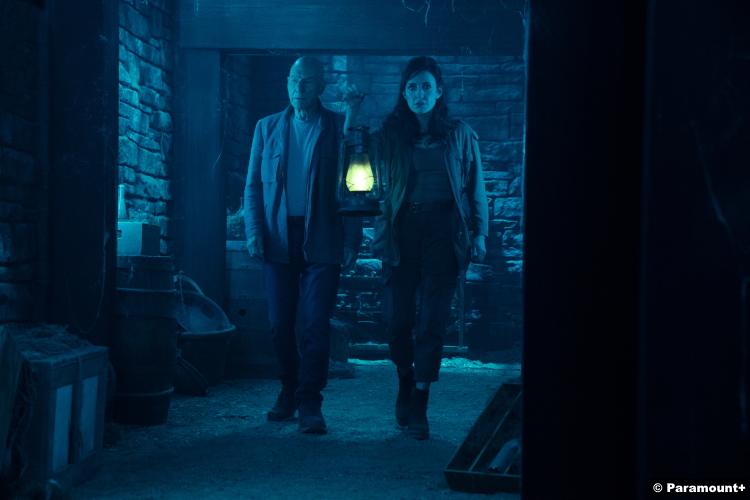 And another flashback…hide and seek with the mother…yadda yadda back to the tunnels, more clues as to what actually happened, remembering how to get down there by turning a fleur-de-lis on a bookcase. This flashback’s purpose is obviously to get Picard to remember the fleur-de-lis, so he does, and they go down to the basement tunnels with Soong hot on their trail yelling PICAAAARD every few seconds just in case we’ve forgotten he’s there.

Picard and Tallinn are in the basement, and they apparently have time to process the whole memory of what Tallinn saw in Picard’s mind.  Not that they should be, you know, running away from the MAPC or trying to get to the ship.  No.  The important thing now is to process all the things about Picard’s mother, and do that while staying in one place.  Do we have time for this conversation?!?! 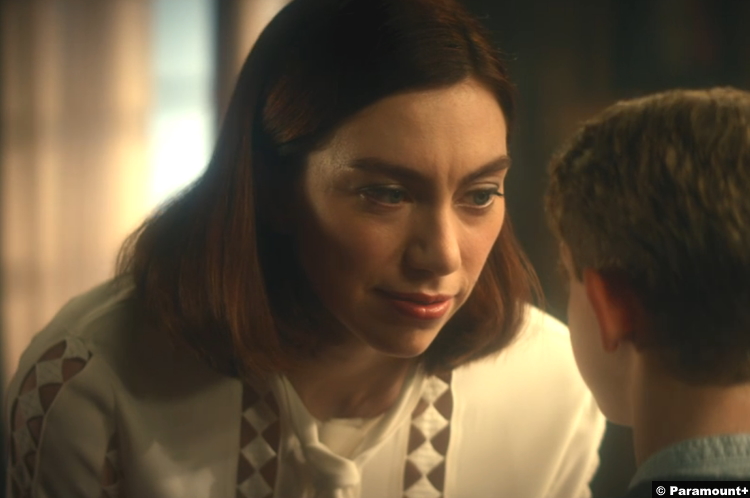 Back to Raffi and Seven, who watch bright green laser sights coming for them before Seven says “arm up” and they grab…some kitchen supplies.  And then we get to something that makes not a damn lick of sense for Seven’s character or what we know of the United Federation of Planets.  The Federation wouldn’t let Seven join because she had been assimilated by the Borg?!  That’s…that’s just some absolute crap right there.  Gene Roddenberry is spinning so fast in his grave he’s created a wormhole to the Gamma Quadrant in there.

Raffi and Seven do a Butch Cassidy and the Sundance Kid across a field past the MAPC, which should be nearly impossible to survive, but is actually super easy, barely an inconvenience. (Ryan George, you ever do episodes of Trek?)

Back on the ship, the BQ is looking for holo-Elnor, who is making a lot of noise looking for weapons and discarding all of them except for his trusty sword, which is there.

Rios and Teresa have a conversation that doesn’t matter about Rios trying to get back and help with the fight, and Dr. Teresa is amazed by a retrofuturistic tricorder, but somehow Rios thinks she’ll know how to use it to fix his bullet wound.  Which I guess she does?

Soong finds the secret entrance to the basement because of some convenient dust on the floor, and he figures all that out and goes down there.  Meanwhile, Picard (haunted by his younger self) and Tallinn try to find a way out of the basement, although Picard’s a little busy having all these flashbacks.

Look, I’m not going to be as snarky about the scenes involving the mother’s mental health problems, her pain, her depression.  Those scenes hit hard, and they’re good.  They just needed to be somewhere else in the show.  The fact that they’re all mixed up in the madcap incoherent lunacy of the rest of this episode makes them lose some of their power, the impact of the final reveal. 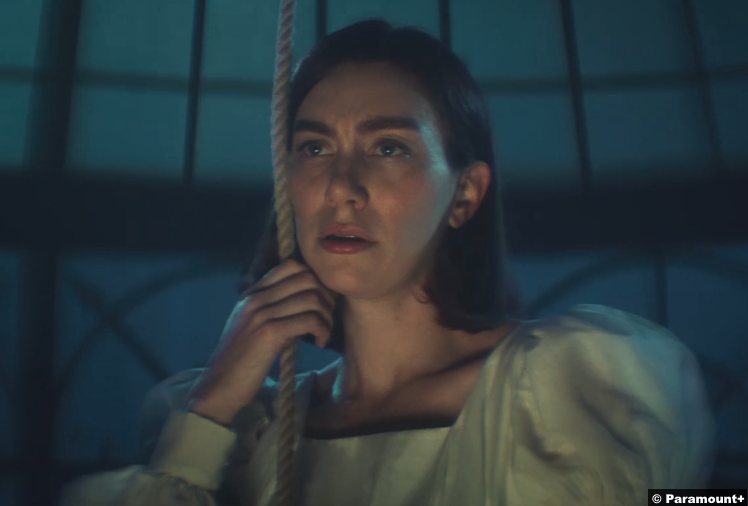 Back to reality, whoops there goes gravity…sorry, I was remembering something better than this episode, and I’m not a fan of Eminem.

So I opened the door.

At which point, Soong finds them, and they have to flee.  Jean-Luc finds a WW2-era gun, and fires it, and it works, which is nice, and the two of them run away from Soong and the MAPC.

Raffi and Seven make it onto the ship, which is nice.  Seven has a kind of clever idea but needs holo-Elnor to release control of the ship, so he does, and she beams the MAPC (or just the ones on the ship?? it’s unclear) into the walls of the basement of the chateau.  Brutal and effective, and clever, but narratively nonsensical.

Then the show has time for Raffi and holo-Elnor to have a nice moment of closure , and it’s really lovely that the MAPC and anything else in the episode stops mattering long enough for this moment to happen.  Do we have time for this conversation??

Ok.  That’s enough recap.  You get the idea.  The rest of the episode doesn’t get much smarter.  The reveal that Picard’s mother killed herself, and his callback to the TNG episode where he sees his mother as an old woman offering him tea, is powerful but again, completely loses any impact in the maelstrom of suck that is everything else going on.  The conversation between the BQ and Jurati where they contemplate a kinder, gentler Borg is nice, but again…blargh.  The shock of the BQ stabbing Seven in the gut, and then doing a Bond villain monologue, isn’t terrible, but it’s more of the same. 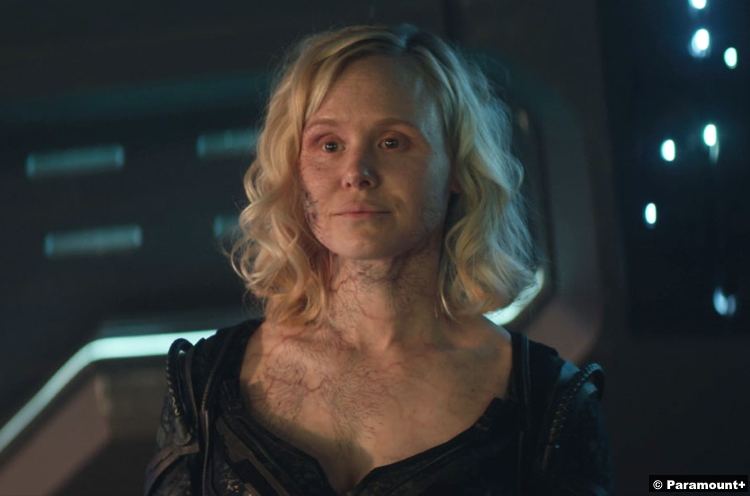 Have any of our characters slept in the last few days?  You know, there was an episode of TNG about the consequences of going without REM sleep for a prolonged period.

In the end, there’s some kind of a deal made, and the BQ flies off with the ship.  I still don’t really understand what the heck happened, but next week’s episode…

I don’t even really want to watch next week’s episode.  But I will.  For you, my invisible and unknowable readers. 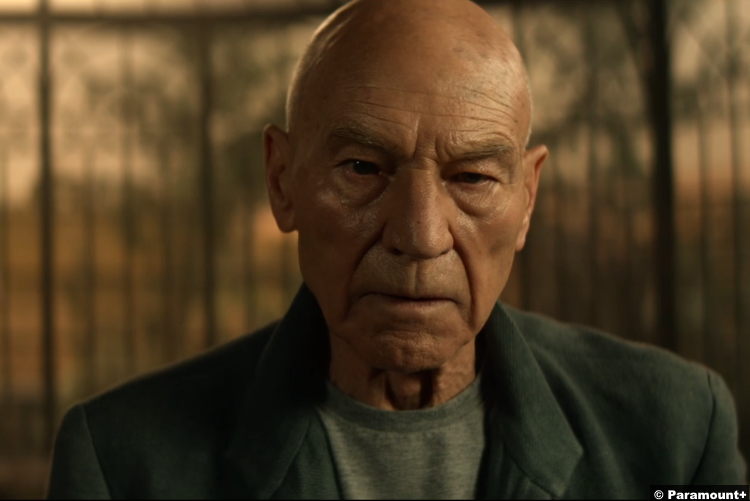