Once upon a time there was a little prince…

Bipolar disorder is a trickster, a monster that hides in the brain and comes out only to wreak havoc – plunging its sufferers into deep depressions or manic and uncontrolled highs.  But there’s a reason why we don’t call it “manic depression” anymore – because bipolar is a lot more complicated than reducing it to those two words can possibly express.  Sometimes bipolar disorder looks like a normal day.  Sometimes it doesn’t.  Sometimes you can see the struggle in a loved one’s eyes.  Sometimes you don’t know what they’re dealing with unless they tell you.

Someone I care deeply about experiences bipolar disorder, and I’m witness to their struggle.  To protect their privacy, I won’t tell you much about them, but suffice it to say that I understand where this episode went, and why it was so hard for Jean-Luc to process the truth that his unconscious mind uncovered.

The Little Prince is a classic French children’s novel by Antoine de Saint-Exupéry, chronicling the adventures of a young prince who lives on a tiny planet. The prince travels all over space and wrestles with issues of loneliness and friendship, love, loss, and the big questions of life. 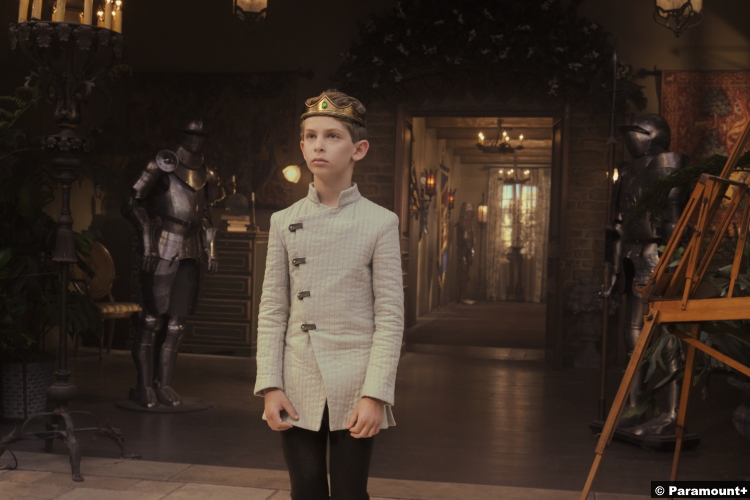 And the show uses this French children’s story about a little prince who travels through space and deals with difficult emotions as a very subtle framing device to explore the mind of an ostensibly French starship captain with no small amount of all of those emotions.  The book itself is never mentioned, but if you know The Little Prince, you have to see the book in this episode.

The psychologist/father in Jean-Luc’s head is none other than Gaius Baltar himself, James Callis.  So say we all, indeed.  And I loved his TNG-era uniform, with the colors darkened to further show the fog and unreality of the situation. 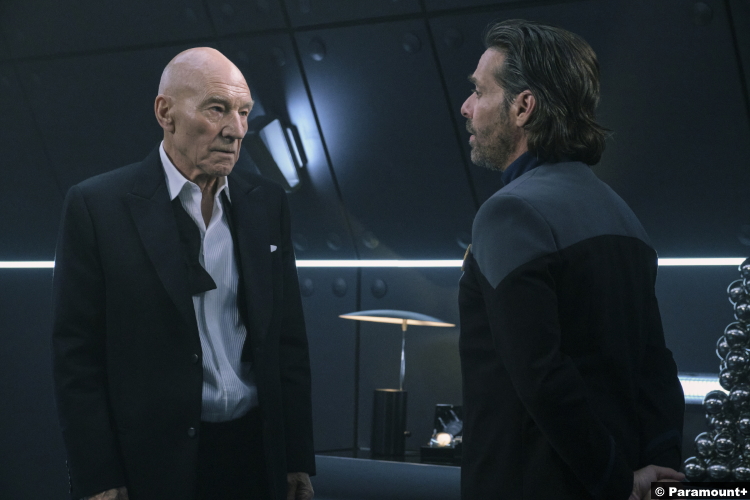 And it was Jean-Luc’s father – the man Jean-Luc feared, who was ostensibly abusing his mother – who rescued him from his mother’s manic escape to the basement when Jean-Luc got his foot trapped. The emotion of that moment, the almost catharsis of it – it hit hard. Callis’s performance is perfect here.

So what else happens in this thing?

Well, we’ve got some great quippiness between Seven and Raffi, as per usual.  Their task this week is to try to find Agnes and figure out what’s happened to her because she’s been acting “weird.”  Of course, we know – but they don’t – that Agnes is now…Borgnes? Agnes Borgati?  I’ll work on it.

There is a cute flirty scene between the two of them on the La Sirena where they describe Agnes and Rios as a sideshow (remember how Queengnes did the “grab the tie and smooch” move on Rios at the party last week?) and the two of them as the main act.

Unfortunately, the way the show has unfurled the story of Agnes and the BQ has been a little too much “tell” and not enough “show,” and they’ve told us too much.  Now the characters know so much less about the situation than the audience does that watching them figure it out is kind of boring – you just need them to get from point A to B quickly so we can move on with the plot.  Either we needed less information or Seven and Raffi needed more, I’m not sure which. 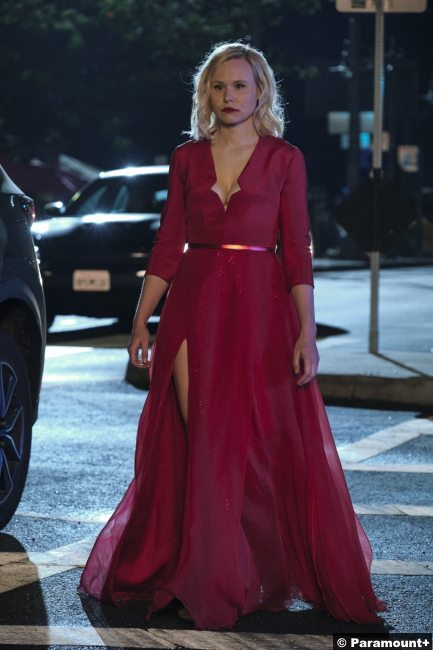 For her part, Queeness Jurborgti goes to a bar (where Patrick Stewart’s actual wife is singing the shit out of some damn good rock & roll) and shatters a window.  Why?  Well, when Seven and Raffi come along later to see all the broken glass that nobody has cleaned up despite it being the next morning (come on, show), Seven realizes it’s the endorphins, the rush of doing something dangerous like breaking a window, that will allow the BQ to take more control of Agnes’s mind and…dun dun dun…birth a new BQ.

And allow the Borg to take over the Earth in the 21st century.  Sound familiar?

Also, wait, how is it the next morning?  How late were they at the party, how long did it take them to get Jean-Luc back to the clinic, and how long has Tallinn been inside Jean-Luc’s head?

TBH, so much happens in this episode that it’s hard to keep it all straight.

Whilst Jean-Luc is unconscious, Dr. Teresa comes back to the clinic with her kiddo, but she can’t get into the exam room because Rios is blocking it – obviously because Tallinn is in there with her alien tech doing things that Rios can’t possibly explain to Dr. Teresa without breaking time.  But he, you know, does it anyway – calling in some kind of 24th-century neural stabilizer to be beamed into the exam room and handing it to a bewildered Dr. Teresa, and then just saying “screw it” and beaming all of them onto La Sirena.  I love the kid saying “I’m going to go touch everything!” 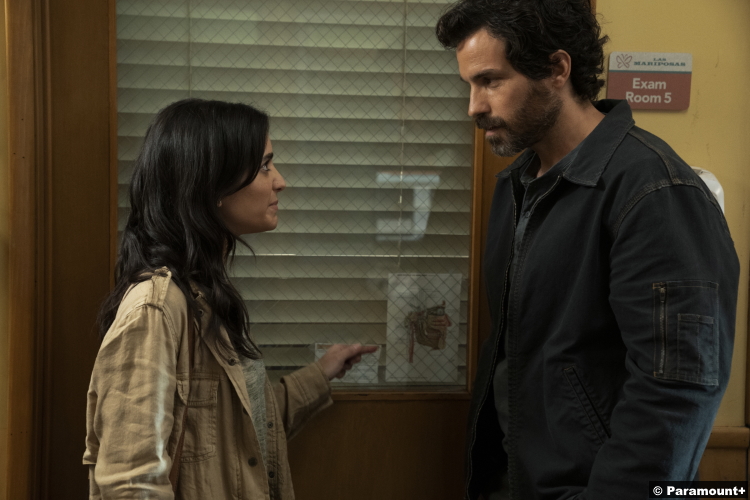 Why the literal hell are they at the clinic instead of on the ship for all of this?  Show?  Hello?  This makes no sense.

Fast-forward a bit.  Jean-Luc, now conscious, talks with Tallinn about what they’ve just experienced together.  I’m still trying to figure out why she named herself after the capital of Estonia, but whatever.  Turns out she’s a Romulan, which I think we all saw coming, but it’s still a cool moment.  She might be an ancestor of Laris.  Of course then the show has to add a weird and unnecessary 8-hour timer to Tallinn’s ability to disguise her ear, so…why?

Jean-Luc and Tallinn try to figure out why Q would want Jean-Luc to go through all of this, process this revelation about his mother, as part of whatever lesson Q is trying to impart with his timey wimey shenanigans.  Jean-Luc realizes he needs to take the offensive here and get to know Q.  To do that, he needs Guinan, so back to 10-Forward it is.

Guinan tells a really cool story about the truce between the Q and the El-Aurians, giving some wonderful backstory and dimensionality to the El-Aurian people and how they experience reality.  She pulls out…what is essentially a genie lamp…the bottle over which the truce was signed, which when opened is supposed to summon a Q.  She opens it, there’s a lot of chaos and breaking bottles, and …no Q.

Of course, we know why, because the show already showed us Q being unable to use his powers.

And then some guy insists himself into the bar, does a very stupid act of pretending to be a customer before revealing himself to be a “Federal Agent” by showing footage of Jean-Luc beaming onto the street in front of the bar, and arrests Jean-Luc and Guinan.  Cool twist, kind of out of nowhere, but we’ll just have to wait till next week to find out what happens.

Is that everything?  Honestly, this episode was a ride.

9/10.  Several points off for some lingering plot stupidity, but several points back for the nuanced and hard portrayal of mental illness.  There are a lot of good moments in this show – good because they’re performed and directed well, but also because sometimes, this show does good. 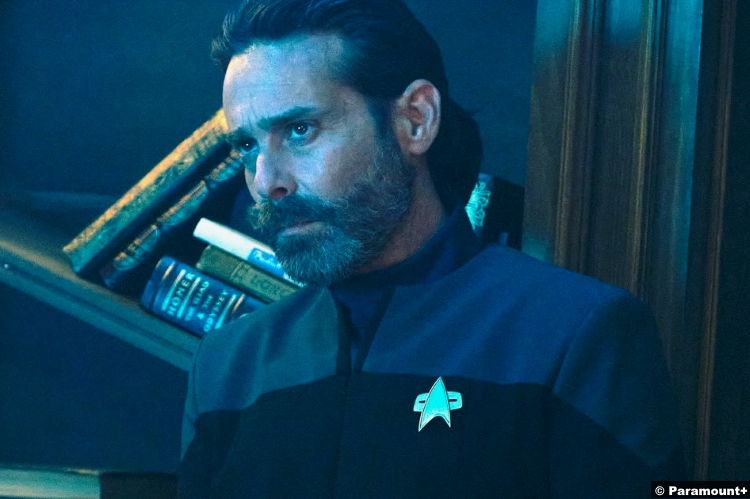