Something I didn’t mention last week, because I had so much other stuff to mention, is the relationship of the Pod Squad to Jones. Specifically, I kept wondering why they were being so vulnerable with him. Or really, so gullible. Like, how could they possibly trust anything he says? Their own mothers locked him up. (I think.)

I mean, I understand why they want to trust him. Not only is he like them, but he’s also the only link they have to the world from which they came. And it feels good to have someone tell you what you are. Uh, unless you’re Michael, who’s really struggling with the idea that he’s the issue of a genocidal dictator. 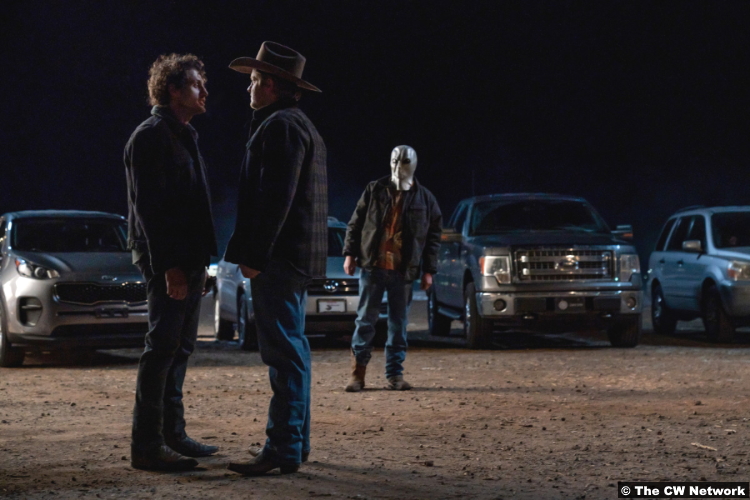 On that note, Max isn’t doing too well with the whole Jones thing, either. And it doesn’t help that Liz has reappeared. Max is not cool at all when they meet, rushing off as soon as he can.

Of course, he’s got a lot on his plate. Besides the failing heart issue, there’s the murder. Maria manages to figure out where the funeral she saw takes place. It’s not a church, so at first, it seems like the obvious clue is figuring out who would have their funeral in a non-religious setting. The immediate answer seems to be Michael, who takes the news of his possible impending murder in stride.

In fact, it’s almost like he welcomes it, especially in light of the news of his alleged ancestry. He tries to start a fight with Wyatt’s friends, for instance. This happens at one of those movie nights at the drive-in, which is also hosting local vendors. Wyatt’s gang actually starts the tension, by picking on a local beekeeper. It’s worth noting, by the way, that Wyatt tries to defuse the situation.

When it heats up, though, that’s when Michael gets involved. Max ends up calling him off, while the beekeeper makes a report. This triggers a memory for Maria, as in her vision, she’s saying that the murder wouldn’t have happened if the sheriff’s department had followed through on a report. This seems like further evidence that Michael is the victim. 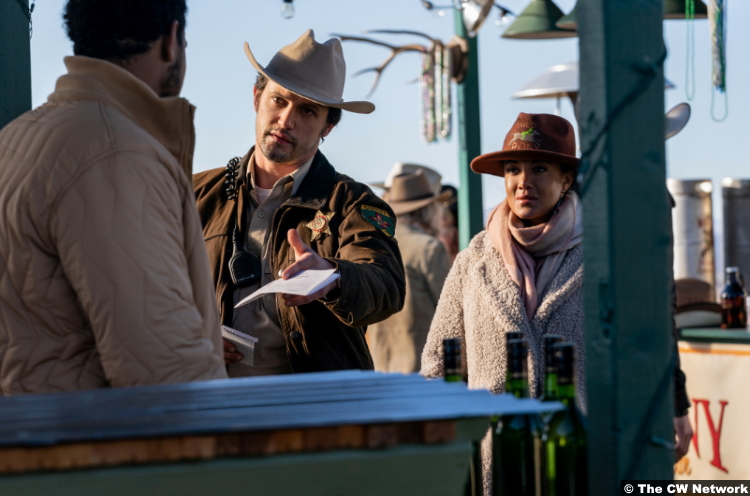 However, Alex points out the obvious thing that everyone, including I, missed. In Maria’s vision, Alex is the one who says they’re covering up a murder. But there is no universe in which Alex would let Michael’s murder go unsolved. So the victim must be someone else.

And as far as the non-church funeral goes, that’s also a dead end. The church–the only one in town, I guess-catches fire this episode, so the future funeral will have to be somewhere else. And it gets worse. Maria thought that it was snowing in her vision, so they’d have time to solve the murder before it happened. But like on Game of Thrones, when Daenerys has her vision in the House of the Undying, it’s not snow we’re seeing–it’s ashes. You know, just like the ones that are falling on Roswell right now from a wildfire.

It gets worse than that, though. Max finally goes to see Jones again. The trapped alien is obviously playing Max, but he can’t seem to see it. Maybe it’s all that other stuff that’s on his mind. In any case, he gets Max so worked up that he shorts out the cage? I think that’s what happens. Whatever it is, the end result is that an unconscious Max is now in the cage, while Jones walks free. 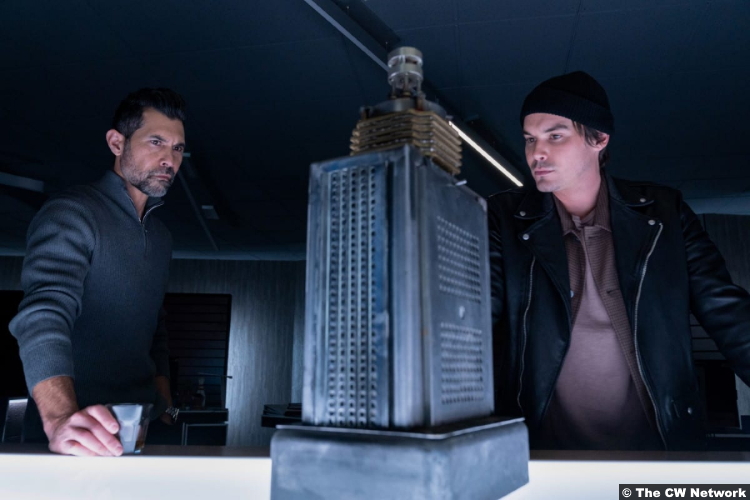 Back at Dark Sky, Alex is working on the Lockhart Machine problem, which turns itself on right on schedule. Earlier, Michael gives Alex the turquoise bit that apparently took a big hit of alien mojo during the original Roswell crash. When the machine turns on, so does the turquoise, lighting up in Alex’s pocket. He puts it closer to the machine, which starts blasting “I Don’t Want to Set the World on Fire” by The Ink Spots. (You might know it from Fallout.)

And in Roswell, Kyle’s dad’s old radio also starts playing the song. He thinks he hears his dad’s voice coming through. Well, something is making contact.

8/10 – For the record, I thought someone clearly said, “What the [f-word]?” through Kyle’s radio. Anyway, I thought things were a lot more cohesive this week. In addition, I’m glad that Liz took responsibility for her part in what happened with Max. And speaking of that, I’m also glad that it was Kyle who took her to task about it. Finally, I really liked his scene with Isobel. It’s about time someone acknowledged how much he’s doing for them.