Roswell, New Mexico S02E12 Review: Crash Into Me – Get her some acetone!

When we found out that Helena was behind a bomb plot last week, the biggest question for me was her motive. It would seem obvious at first. If she found that an alien killed Rosa, then it’s no surprise that she’d want to kill aliens.

However, we know from her daughters that she’s never been mother of the year. So maybe her motive wasn’t as clear-cut as it first seemed. And that’s exactly what we find out this week. 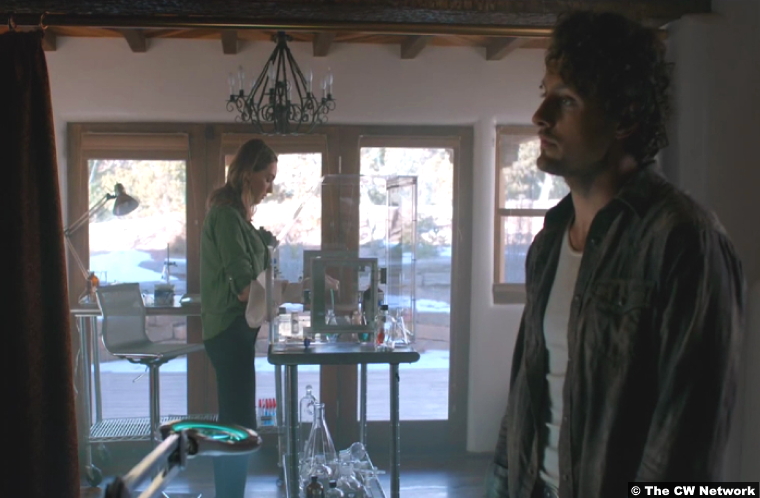 She explains to Michael that the bomb isn’t exactly a bomb, not really. It’s actually a bioweapon that’s engineered to target only a specific person or group’s DNA. Charlie, who’s also a hostage, tells Michael that she developed it as a teenager. And although it sounds ghastly, she had what she thought was a good reason for making it. If you could target only a terrorist, for instance, then you could take them out while minimizing collateral damage.

Incidentally, Andrew Mayne discusses a similar idea in one of his books–I believe one in The Naturalist series. His protagonist suggests that research had been done on a flu strain that would target only Osama bin Laden. While I couldn’t find any real-life corroboration on that, it seems that the CIA did try some funny business with another illness.

Anyway, I’m burying the lede. Helena claims that she’s not trying to kill aliens, after all. Instead, she’s having Charlie work on a new target: Jesse Manes. Of course, if this bioweapon targets his DNA, then anyone who shares his DNA is also at risk. That means that Alex absolutely cannot be in the blast zone.

And after some consideration, it seems most likely that the attack will take place at CrashCon, the carnival for alien enthusiasts. Wow, if they only knew how many were walking among them.

Max and Liz figure out that an attack that’s meant to hurt only a couple of people wouldn’t mean much to Jesse Manes, not in the long run. They decide that he must be planning something bigger. And boy, is he!

He’s got all of his bases covered. Max had been notified earlier of a payment to his bank account. It turns out that he “sold” a piece of alien tech to Grant Green, who’s displaying it at the carnival. Sanders explains that the piece came from the barn and he’s pretty sure it’s explosive. 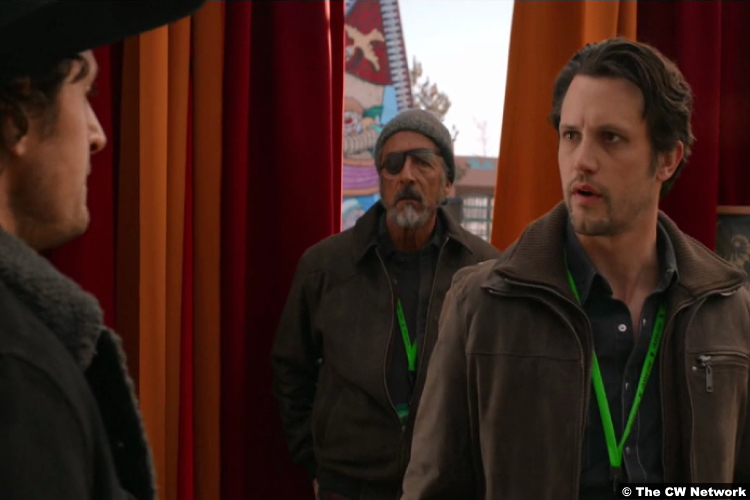 That’s not great, because everything is rigged to blow. It’s like Jesse and Flint got in there and built everything with typing paper and oily rags. Seriously. The stage is freshly varnished and even the charming hay bales around the stage are shot through with an accelerant. If so much as a wee spark hits either of them, they’ll ignite quickly and burn fast. A massive alien explosion? Yeah, that’s not going to be great for anyone.

So it looks as if the plan is to blow up a bunch of folks and then blame Max for it. So Isobel and a freed Michael are confiscating lighters and putting out cigarettes, but it’s like playing whack-a-mole. They can stop that, but the anti-Manes atomizer bomb is still out there and Jesse’s carrying it. Helena switched them out by disguising herself as a housekeeper. You’d think Jesse would have recognized her, even with the wig, but she did keep her face turned away. Also, it seems like Helena could come up with a much less complicated plan to get revenge, but she just must love the drama of it. And we stan a dramatic b-word.

But anyway, Flint is now also there with the anti-alien atomizer. And that’s a problem as well, but let’s go back to the anti-Manes bomb. (I may need to get a whiteboard to keep this all straight.) We could be callous and say, “Good riddance,” except for one tiny little detail. Both Greg and Alex, who freed himself, are also at the carnival.

Maria and Rosa try to shepherd Greg (and the kids he’s brought on a field trip) out of there, but they don’t get a chance to leave. Alex confronts his dad, telling him that the atomizer he’s holding will only kill Manes men. (And ladies, I guess, if we ever meet any.) Greg, who hasn’t left, happens upon this confrontation and wants to know what kind of weapon the atomizer is. 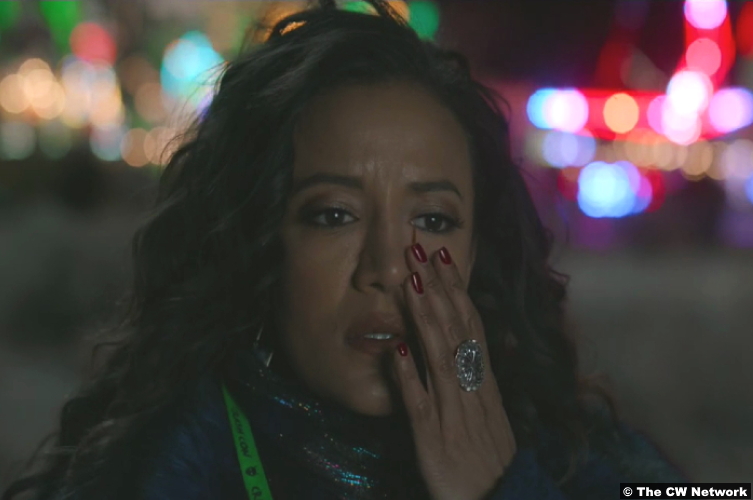 He could ask Flint, who manages to set his off after a brief scuffle with Max. Maria gets it, though, and runs away with it, taking it as far from the carnival as she can get. Her eye starts bleeding afterwards, and she collapses. I hope that since she just has a teensy bit of alien DNA, she’ll be able to recover quickly. Get her some acetone!

Meanwhile, Max is like, if you can’t beat ’em, siphon their life energy. And that’s exactly what he tries to do to Flint. It seems successful, but at what cost? Because Max is down for the count, once again. And that’s where we leave everyone, as Liz frantically tries to revive him, until next week.

8/10 – This was a very abbreviated review because there is so much more that went on–Isobel getting into Mimi’s memories, Max and Jenna finding Jim Valenti’s storage locker, Charlie still being trapped in a burning house–that I couldn’t fit in. And Kyle and Steph, oh my goodness. This season isn’t over, of course, but if I had one big complaint about it so far, it’s that characters too often get sidelined from the main story. Kyle is a good example. Everyone’s in a life or death struggle and Kyle? Uh, he’s at work.

And Diego is last seen sneaking into Liz’s lab!