The Falcon and the Winter Soldier S01E05-06 Review: A satisfying and emotional conclusion

In the first review of the show, after only a single episode, I said this about the direction of the series and the themes it would explore:

So that’s the show’s central message, established right there in hour one: Who is worthy to be the next Captain America? Bucky doesn’t think he is because he’s racked by guilt. Sam doesn’t think he is because he feels inadequate to stand in Steve’s shadow (the government’s disrespect of him only feeds those feelings, as well). We don’t yet know about John Walker. He’s the kind of character that is either going to be a raging b-hole or someone we expect to be a raging b-hole who is, in fact, a nice guy forced into an awkward situation. Time will tell.

Bucky’s guilt over his past disqualifies himself in his own mind from carrying the shield. Sam’s hesitance to step into a role representing a country that still has a long way to go with regards to racial justice makes him feel the shield isn’t right for him. John Walker…well he turned out to be a raging b-hold didn’t he?

You can check out our previous two reviews of the show here: The Falcon and Winter Soldier Reviews

Along the way the show has explored these three characters, walking them through a journey to reach the point where they can happily accept who they are and the place they serve in the world going forward… 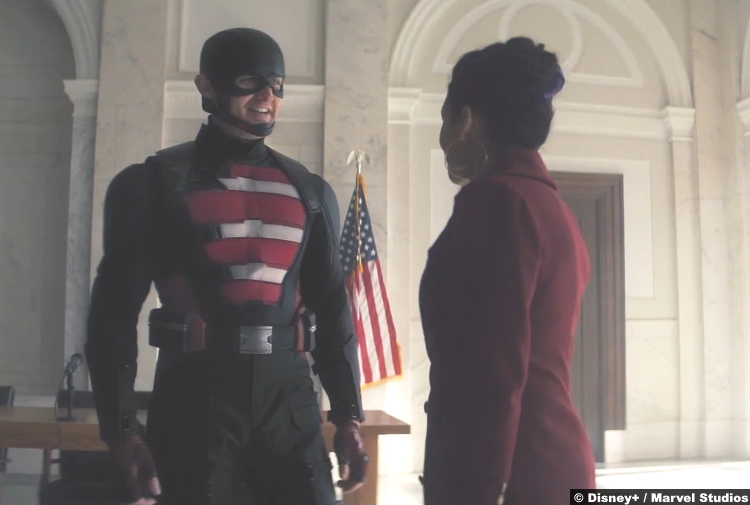 He started this story with the right combination of ignorance, presumption, and arrogance to be a tiramisu of suck. All credit goes to Wyatt Russell for playing the role perfectly. No one wanted this goober to step into Steve’s role; he and the MCU creative team knew exactly what buttons to push to get the maximum annoyance out of people. This “faux Cap” proved himself totally unprepared, both physically and mentally, to step into the shoes of Captain America. For crying out loud, he’s a war vet suffering from obvious (undiagnosed, presumably) PTSD, being asked to globe-trot as a punchy-kick hero while being literally draped in the stars and stripes. It was a recipe for disaster and his spiral from “idiotic optimism, expecting everyone just to bow to his every order” to “frustrated and lashing out when everyone laughs at him” was portrayed exactly as it should have been: slowly and then all at once.

We ended episode four with him brutally beating a Flag Smasher to death, an act of vengeance carried out for the death of his partner. He’s super-soldier’d up now, and while that gives him the physical prowess to be Captain America, he will never have his head right enough to do the job. When he’s stripped of his title he lashes out and takes solace in the arms of what we think is Lady Hydra (Julia Louis-Dreyfus).

His final act of heroism comes in the climactic fight when he chooses to try and save lives rather than pursue justice. It’s an important moment, establishing that he’s not a pure villain but merely an inept, easily-manipulated moron. Of course, he fails to save the day and, still denied the rights to the Captain America brand, he dons the black and red and becomes US Agent, gleefully shouting “I’m back!” like the idiotic raging b-hole he is. John’s role was to become the man he was meant to be; by the end of the series he has done so: He’s a wannabe hero, being played like a fiddle by the forces of evil. 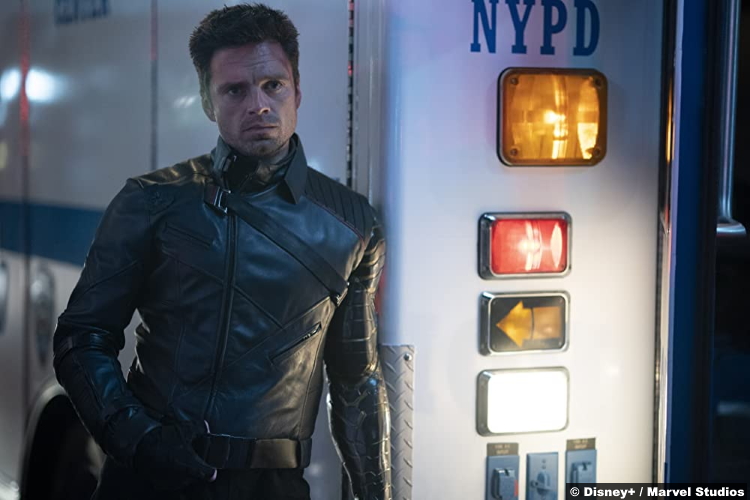 Bucky’s arc is the most straightforward and “closure-feeling” of the three. He committed many atrocities as a brain-washed Hydra agent and in the wake of his “recovery” (both partially after The Winter Soldier movie, and fully with the recent help of the Wakandans), he’s barely had time to process and work through all he was forced to do. In the wake of Thanos’ defeat, he’s been to counseling, been to therapy, and been going from place to place, finding the people he has wronged and trying to make amends. The first episode establishes the emotional struggle that comes with this catharsis, in the form of Nakajima. Naturally, Bucky resolves that last lingering issue in the final episode and ends the series a man having found as much peace as he can.

Where does Bucky go from here? The show has been about his guilt and how it has eaten at him, making him unworthy to carry the shield. By the end of it, he has resolved his guilt but the shield is not his to carry (not that he would carry it with Sam filling Steve’s role, but still). So what’s next? There’s an obvious next step for John Walker. There’s an obvious next step for Sam Wilson. Bucky seems ready to have the quiet retirement that Steve got to enjoy in the wake of Endgame. Will he? That’s up to Kevin Feige I guess, but if he never is seen again I think fans can be satisfied knowing Bucky finally found peace.

Just kidding, bring him back Kevin! Give us Bucky-as-Nomad! 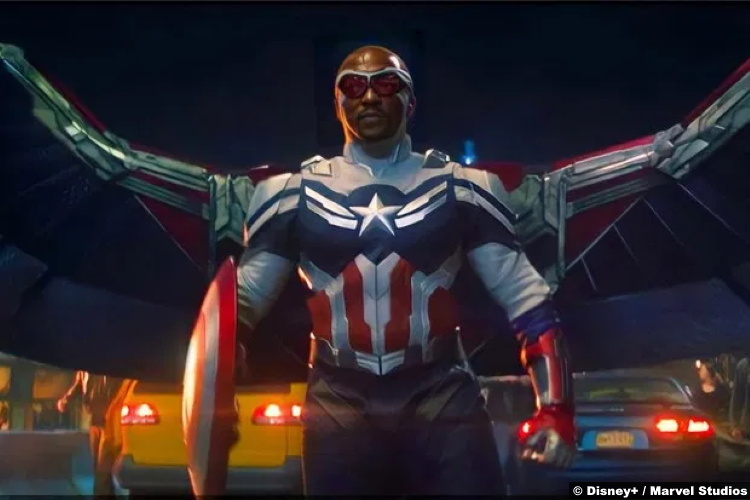 Even more than Bucky, this has been Sam’s show. The struggle both internal and external over a black man inheriting the mantel of Captain America has been the driving force of the series. Everything else has orbited around it. Sam’s hesitancy to take up the role was not because he didn’t feel worthy, per se, but rather it was because he knew how many people both in power and out didn’t want him to take it. To that end, Isaiah Bradley represented the kind of cynical, bitter, “done with it all” character that Sam could have turned into. Instead, he chose a different path. As he says in the finale “our people built this country, bled for it. I’m not going to let anyone tell me I can’t fight for it.”

When the moment comes and Sam is called into action, he doesn’t hesitate. The character who started the series by being guilted into giving away the shield, only to see how destructive it can be when used in the wrong hands, now takes it and his swanky new outfit to the opening battle, confidently proclaiming “I’m Captain America.” Indeed, every preceding episode has started with the words “Falcon and the Winter Soldier.” This one ends with a slight and appropriate change: “Captain America and the Winter Soldier.”

So say we all.

So while I could quibble with some things on an episode by episode basis—like the storytelling decisions, about how Sharon Carter’s role landed kind of flatly, or how Zemo fizzled in the end, or how the Flag Smashers never mattered as anything more than a plot device, or even how the dialogue could get a bit too preachy from time to time—I can also appreciate the overall story being told. More than WandaVision, this show has been a single, six-part story, revolving around the origin story of the next Captain America, while also giving us the origin of what is likely to be his recurring villain and some closure for a long time frenemy/ally.

It wasn’t perfect along the way, but as a single story, it’s hard to find much fault.

Final Grade: 10/10 – Captain America and the Winter Soldier does an okay job in the details and a stellar job overall in rebooting the brand and bringing the hero into the next phase of Marvel storytelling.

PS: The next decade of Marvel stories are going to be bananas and will make the Infinity Saga look as traditional and ordinary as Endgame made the first Iron Man.