In a season of climate-change themed episodes, Doctor Who brings us the most overtly environmentally conscious storylines yet in “Praxeus.” A pair of travel vloggers runs into danger when they camp on the banks of a polluted river, a crashing astronaut’s only hope is an unemployed ex-cop on the other side of the world, and the Doctor must save travelers all over the world from a strange pollution-related sickness that is covering their bodies with scales. It all starts with a dead bird, the kind we see on the shores of lakes and oceans all over the world, and it has global implications not far off from what we can expect in real life.

To recap, we spend the first quarter of the episode seeing the same strange illness overtake travelers in locations like Peru and Madagascar. Meanwhile, ex-cop Jake gets a series of texts from an astronaut we saw falling from space at the beginning of the episode: “FIND ME.” We don’t find out until later that Jake is Adam’s husband, and Adam has been living on the International Space Station–until he recently disappeared. Meanwhile, birds continue infecting people with this mysterious illness, causing scales to appear that look like hard plastic bits.

Yaz and Gabriela discover a device that leads them to a strange control room, allowing them to tap into a global system connected to sites like Madagascar and the Indian Ocean. While they’re trying to figure out what it does, they see a person in a gas mask enter the control room and teleport away to one of those locations. They follow and find themselves in an alien colony–seems like Yaz is constantly teleporting to those this season! 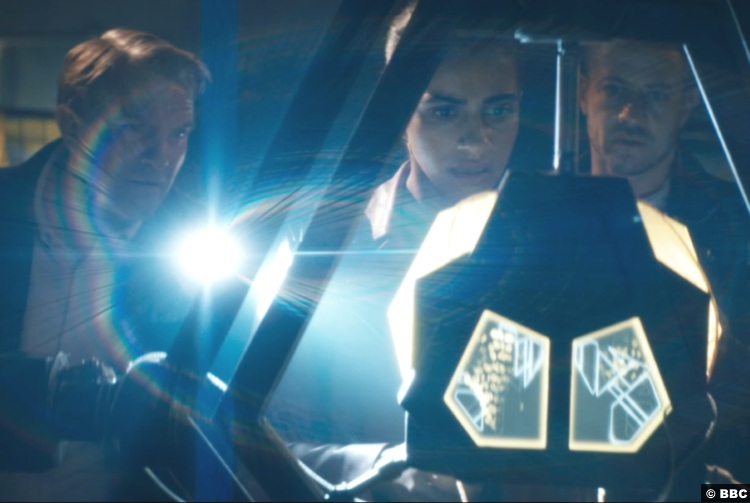 Back in Madagascar, the Doctor tests Adam’s blood and finds there are bacteria in his bloodstream infecting him with the same disease as the other victims. The disease locks onto microplastics in people’s bloodstreams, hardening together into the strange scales seen on Jamila. Suki Cheng, a biologist studying in Madagascar, helps the Doctor to figure out exactly what this disease is and how it’s taking advantage of the plastic already embedded in human bodies from our pollution. They start reverse-engineering an antidote virus to save Adam and soon, everyone else on Earth–the bacterium is spreading, and soon every human could be infected if the gang doesn’t solve this.

Adam’s monologue about how the planet looks from above is one of the most poetic ways this episode expresses the urgency of climate change. The Doctor takes this perspective in her opening monologue as well–this is the bigger picture on planet Earth that humanity and its plastic contaminants have refused to see. In contrast, the Hitchcock inspired scenes where the Doctor and the companions have to escape flocks of birds infected with the bacterium were a great way to show the Earth fighting back against human abuses. This episode is no-holds-barred when it comes to pointing out the stakes of climate change. 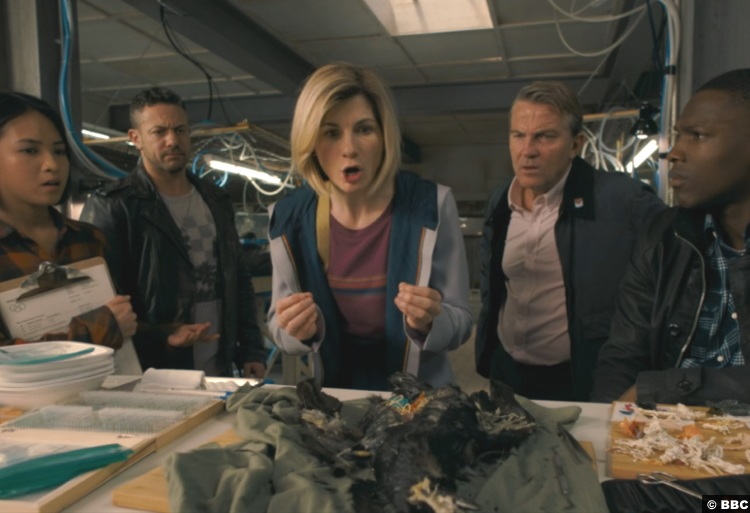 The topic of microplastics in general is a chilling way to get at the effects of human life on Earth. The presence of microplastics in not just food, but water and air as well, is a freaky enough thought, but combine that with the fact that they will never fully break down creates a storyline Doctor Who didn’t even need to add much onto. It’s also pretty believable that humans would purposely infect another planet just to find the cure to use on themselves, as the alien disguised as Suki Cheng did with her team of scientists. That character was meant as a warning against selfishness–anyone who tries to just save themselves in the climate change upheavals coming in the future will find that move backfiring like when Suki was overwhelmed by the disease on her way back to her home planet.

I’d also just like to say that I’m glad that Doctor Who didn’t give in to the usual tropes surrounding gay couples on TV that tend to leave one or both partners dead. While it looks like Jake is about to sacrifice himself to save Adam (and their marriage, and also all of humanity of course), he manages to disperse the antidote virus without dying. The “bury your gays” trope is left behind in the 2010s; 2020 is about living gay couples! Adam and Jake even get to make up and put their marriage back on track, leaving the Doctor with “we’ll take the planet from here.” 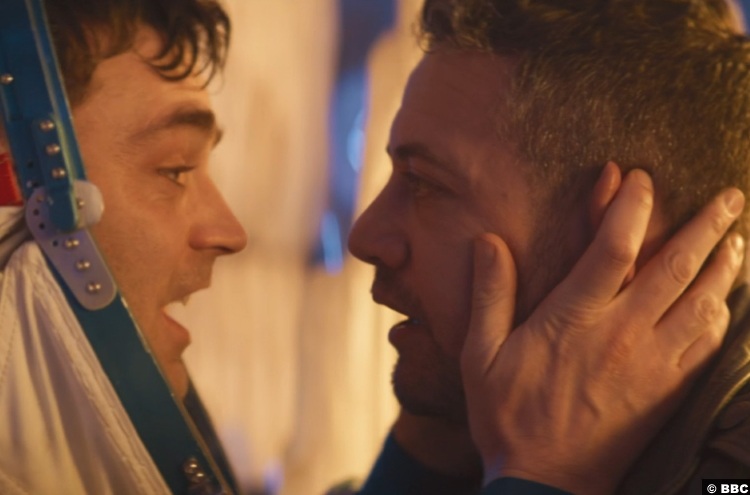 I’ll end on the Doctor’s beginning and ending reminder that the human lives on planet Earth are “separate, and connected.” We all need to remember that we’re connected to each other as the storylines from Doctor Who become less and less science-fiction and more and more real-life.

Summary: 9/10 – A solidly written plot with a deeper meaning to back it up. Doctor Who is at its best when it’s socially relevant, so this is one for the books. It’ll be interesting to see how future generations look back on these episodes, in light of how climate change is handled in the next decade or so.