Doctor Who S12E05 Review: Fugitive of the Judoon – The most gamechanging episode yet!

Something I’ve always found charmingly corny about Doctor Who is that it seems like the Earth only ever gets attacked by the same three aliens. It’s the Daleks, the Cybermen, and those rhino-headed dudes called the Judoon. Oh, and the Master, who the Doctor is still looking for at the start of this week’s episode, “Fugitive of the Judoon.” Also the Weeping Angels, and the Silence (the best Doctor Who villains of all time in my opinion). Okay, maybe I spoke too soon on that one. At any rate, a fun return of a familiar alien, a familiar roguish recurring character, and the familiar season-long hunt for the Master makes this episode a pretty par-for-the-course episode of Doctor Who. Oh, also there’s a new Doctor, she’s the first black woman cast as our favorite Time Lord, and she and Jodie are going to tag-team from now on. But yeah, otherwise pretty boring one this week guys! 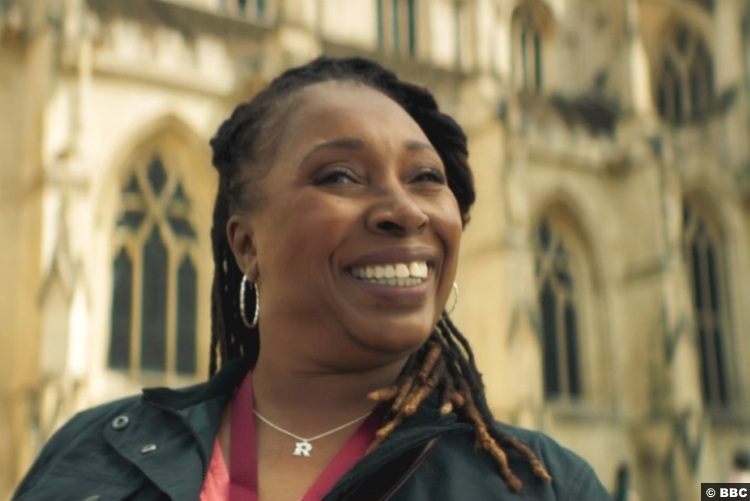 But let’s back up a sec. This episode starts on a woman named Ruth’s birthday, and we get a disconcertingly peaceful cold open following her from breakfast with her husband to her coffee break at work. Ruth gives tours around Gloucester, leading people around the church where they filmed Harry Potter and so forth. She’s clearly got an unflappable spirit, because she spends all day either advertising her tours or giving them, and it’s always to bored, disgruntled tourists. When she stops for a coffee, the barista (pivoting to the cafe business after a lifetime bartending) is clearly in love with her. Sounds like this lady has a nice little life going on! Too bad the Judoon are about to blow it all up.

For those of you who want a refresher, the Judoon are an alien private police force who travel the galaxy looking for planets to help oppress. “A platoon of Judoon, near the moon!” that line gave me some Bojack Horseman vibes. The Judoon descend on Earth and start rounding everyone up, apparently looking for Ruth’s husband Lee. The Doctor takes on the Judoon, while the companions get zapped one by one into yet another strange spaceship–and find Jack Harkness there! 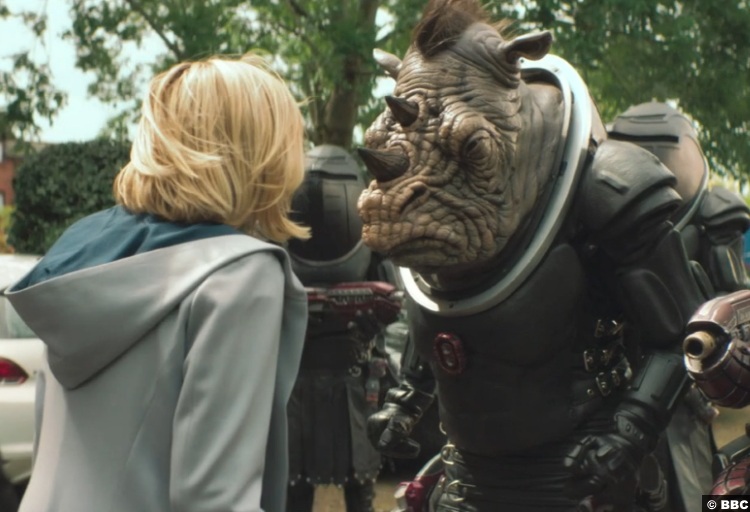 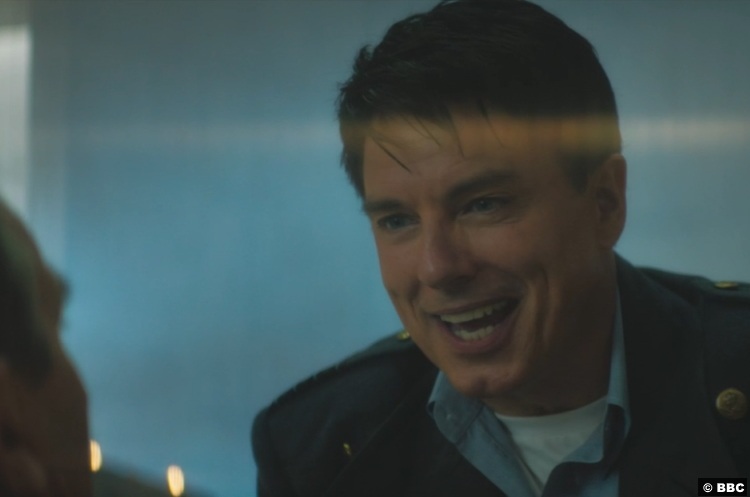 In terms of favorite moments of this whole breathtaking episode, the only thing better than Jack Harkness’s “you missed me, right?” was the smooch he gives Graham thinking he’s the Doctor. Jack’s nanogenes quickly get the best of him and he disappears, but not before he gives the companions a message for the Doctor: “Beware the lone Cyberman”?!?! 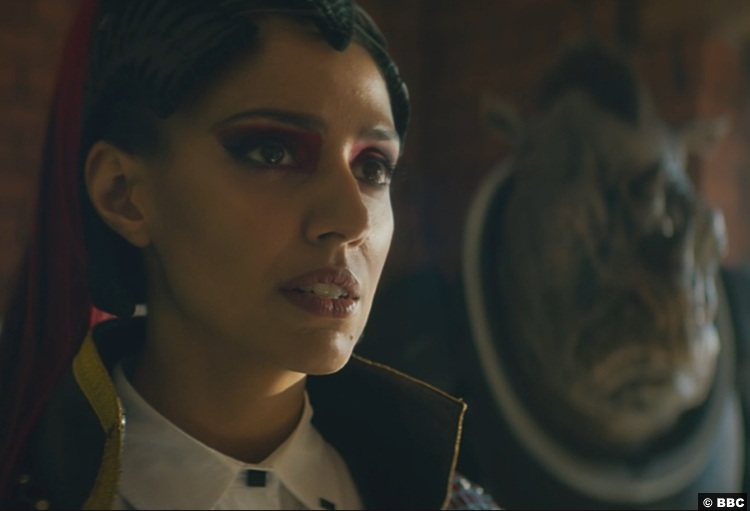 Back on Earth, Lee is meeting with Commander Gat, a strikingly gorgeous military space lady. She reveals that Lee is actually not the one she’s looking for–but who is then? Just when we’re starting to piece it all together, Ruth unlocks her memory and introduces herself: “I’m the Doctor, a traveler in space and time.” Has there ever been a more thrilling delivery of those classic Doctor Who lines?

This episode was so full of twists and turns that I’m left reeling from the implications it has for the rest of the season. First of all, I LOVE the fact that they used the same mistaken gender trick to have the Judoon go after Lee instead of the real Doctor. And after Lee died, I bet you thought Ruth was the Master, didn’t you? Well, so did I for a second; no shame in being fooled by a really smartly written plot. A great episode of TV knows what its audience is expecting and leads them right into a trap based on those expectations. I also loved that Planet of the Apes moment when she digs up the Tardis. 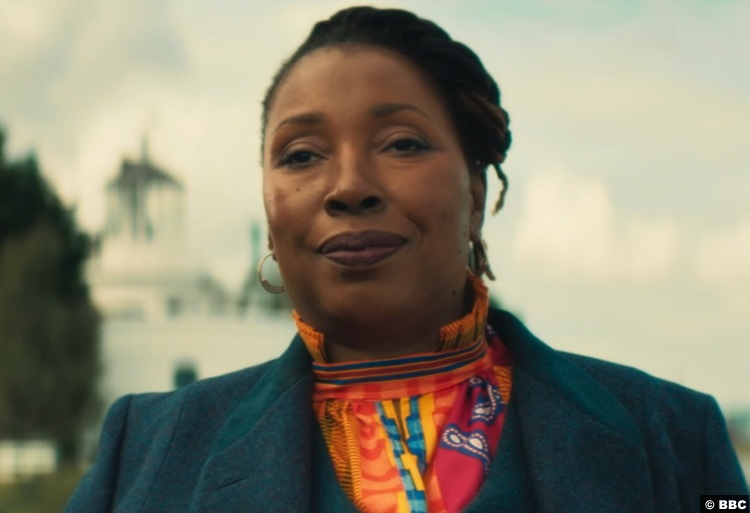 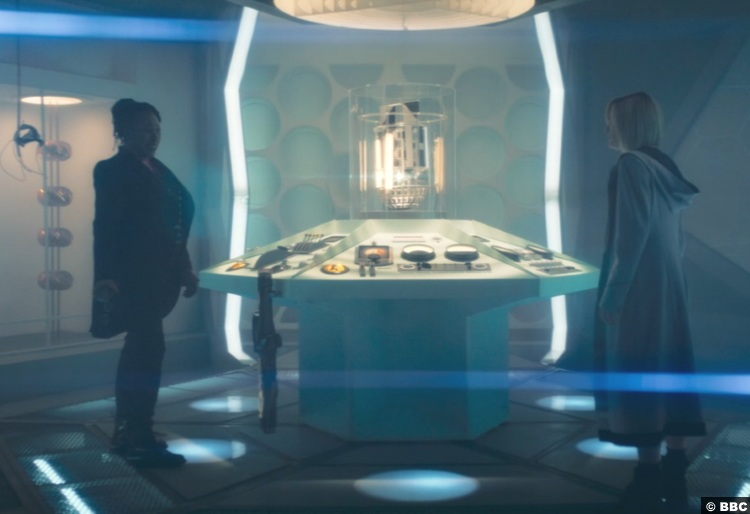 And thank god the Doc stopped hiding who she really is from the companions. The Doctor needed to hear that she’s more than her past; in a season where she’s not even sure what her past and future are, it’s more important than ever for her companions to be there for her as the bedrock of her character.

10/10 – A rating I could only give to an episode where a whole new dang Doctor is introduced! Jack Harkness is another major factor there. I can’t wait to find out what’s going on with this parallel universe Gallifrey, though I supposed we’ll have to wait at least another week!