When we left the Doctor and Co. last episode, they had just realized that O, the bashful spy they’d been hunting aliens with all episode, was really The Master–and they discovered this aboard a crashing airplane, no less! Meanwhile, they’re still trying to keep a bunch of glowing interdimensional beings from turning human DNA into inorganic matter, and the founder of one of the biggest tech companies in the world is involved somehow–and also somehow not human? We’ve got a lot to cover, so let’s jump right in!

We find the Doctor in a strange cactus dimension that seems to belong to the glowing aliens, while Graham, Yaz and Ryan scramble to keep their plane from crashing without the help of the Doctor or her sonic screwdriver. Luckily, the Doctor does come through to help them (sort of) via a screen in the cockpit wall. Graham confuses this recording with Facetime for a sec while the Doctor tries to explain: “Second of all, don’t talk back to screens. I’m obviously a recording and can’t hear you.” Meanwhile, the Doctor meets a strange old-fashioned looking girl named Ada in the cactus dimension. She apparently visits regularly, which is kind of wild considering she doesn’t seem fazed about that fact at all. She even introduces one of the glowing beings as her guardian! For someone from a time period without electric lighting, she seems oddly comfortable with aliens. 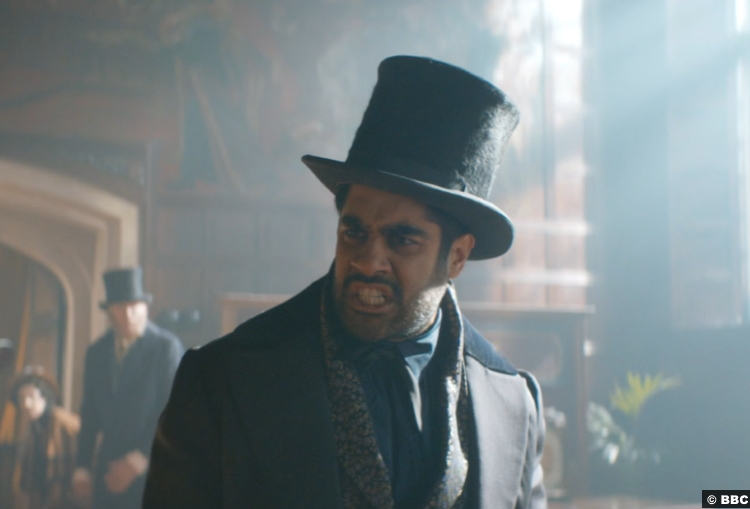 Then we cut away to an evil planning sesh between Barton and O/ The Master/ Missy. We still don’t know where on The Master’s timeline O is situated, so we don’t know if he’s The Master, Missy, or an incarnation we haven’t met yet, but we do know that Barton is getting tired of having an increasingly deranged immortal being calling the shots for what he thought was his plan to rule the world. The bad guy side of this episode seems pretty crowded at this point, and it looks like the villains are in a bit of a power struggle!

Meanwhile, the Doctor has been spit out in the middle of…a 19th-century science fair? She lands on her feet, pretending she’s one of the scientists herself, namely “The Marvelous Apparating Man…I mean lady!” Every time. Meanwhile, the fam has encountered Barton on an airstrip, watching from out of sight while he searches their plane. In a fun double spy plot twist, Barton is now tracking them while they’re trying to track him to find out what he’s up to with O/ The Master/ Missy!

Ada and the Doctor are meanwhile (in a sense) finding their feet at the science fair when O/ The Master/ Missy shows up with a shrinking device! O makes a blunder though, revealing that he has basically no control over the glowing dudes, aka the Cassavan–causing an adorable expression of delight and realization on Jodie’s face. Ada’s certainly shaping up into Companion material, considering she commandeers one of the Science Devices to save herself and the Doctor and engineer their escape with her friend, Babbage. 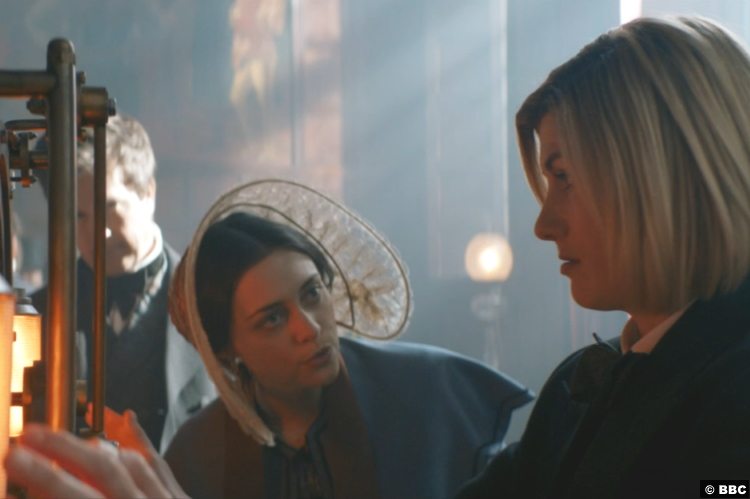 Once they’ve gotten to safety, Ada reveals that her friend from the science fair is Charles Babbage, one of the first computer programmers, and Ada herself is Ada Lovelace–or currently Gordon “but who knows, maybe you’ll meet a nice Earl!” Guess she’s got too much history to make to become a new Companion, so ah well. Turns out Ada has epilepsy that’s been giving her a kind of communion with the glowing aliens, who study her in the cactus dimension! In one of her classic figuring-it-out monologues, Jodie realizes that the aliens are spies not just all over Earth in the 21st century, but all over Earth throughout history too! They’ve been using a machine/ statue, which looks roughly like an artist’s mannequin, to stabilize themselves within our dimension. She uses a conveniently appearing glowing figure to catch a ride back to the future to save her friends with her new knowledge.

Well, we thought the Doctor would be making her way back to the 21st century, but instead, she lands in France, 1943. She ducks for cover with some French resistance fighters, just in time to avoid O/ The Master on patrol with some Nazis! She meets the first wireless operator (Noor Inayat Khan) to ever be dropped behind enemy lines and sets about making a plan to get back to the future with her and Ada.

Back in the 40s, the Doctor uses the Morse code rhythm for two hearts (aw) to send a message to O/ The Master to meet her on the top of the Eiffel Tower. Turns out The Master, played by a PoC, can filter people’s perceptions of him to appear Aryan in other time periods–smart retcon by the writers! Sidebar: in a Gestapo outfit, O is giving off major Christoph Waltz vibes; the whole WWII plotline feels like Inglourious Basterds but that just takes the cake. He reveals that he’s been using Barton and the Cassavan for a plot that involves a quantum version of Barton and the machine that stabilizes the Cassavan in this universe. But more mind-blowingly, he reveals that the remains of Gallifrey have been utterly destroyed. She doesn’t get clarification on that point, but she does manage to jam his filter and leave him to the Nazis. Then, with Ada and Noor in the Tardis, she connects the dots: the Cassavans have been gathering data on every person in the history of computer science, as well as on human DNA. Time to head back to the present to sort this out! 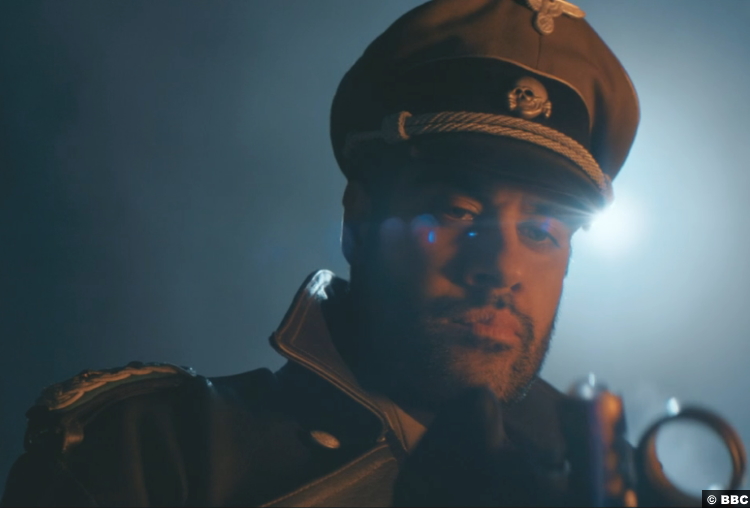 For the climax, Barton is giving a keynote speech to a tech conference that sounds more like a supervillain monologue–he thanks all of humanity for giving him all the information on our lives in exchange for fun shiny gadgets, even sending every device on Earth a text saying “Humanity is over” to show off his power. He then reveals that human DNA can store more information than any artificial hard drive, meaning that the changes the Cassavans have made to human DNA have been like reformatting a drive to prepare it for storage. Barton “reformats” all the humans at his conference, turning them all their bodies into drives. He even starts the transformation on every human on Earth, including Yaz’s family!

The companions have been looking on in horror, and they then encounter O backstage of the conference. Luckily, the Doctor shows up at the last minute to stop the transformation of every person on Earth. She went back in time to put a stopgap into the Silver Lady statue, and reveals to the Cassavans that the Master was planning to double-cross them. They retreat to their dimension, taking him with them! After that, all the Doctor has to do is set up the video to help the companions get off the plane and put everyone back in their proper time periods. The companions, rejoining her, then confront her with some questions–and that’s where we leave the gang.

Seems like this episode really took on tech companies! It literally went through the entirety of computing history just to drag the surveillance state. Props to the Doctor for the wry metaphor of humans being turned into vessels for information! I also love where this episode went with the mystery of Gallifrey–I can’t wait to find out where they go with this as the companions continue to make the Doctor talk. Check back here next week to see what we find out about the secrets the Master hinted at!

9/10 – This episode gave us some big philosophical implications while opening up the story for the rest of the season! The Cassavans weren’t as huge of a reveal as they could have been, but everything else in the episode worked together beautifully. 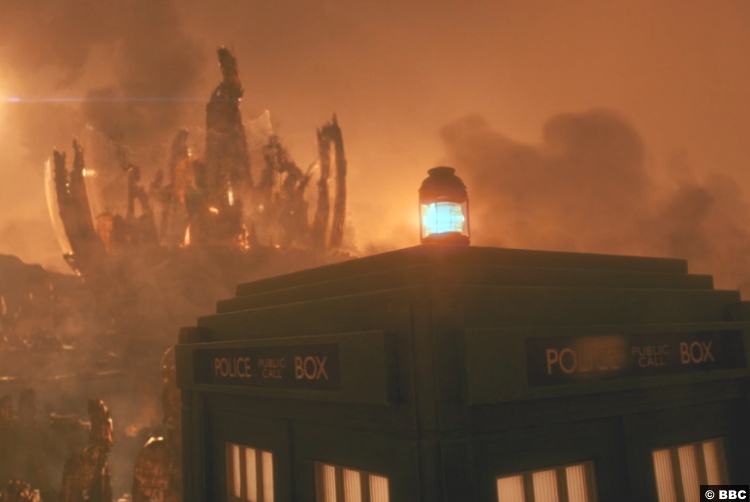