Doctor Who S12E01 Review: Spyfall (Part One) – Plenty of potential!

“The name’s Doctor. The Doctor.” We off-screen Companions were in for a swashbuckling episode of Doctor Who on New Years Day when we were taken on a spy mission with Jodie Whittaker’s Thirteenth Doctor! Fans of the Doctor and 007 alike will love this franchise’s nod to another classic series. Every spy trope in the book is thrown at us in this one, from undercover missions in black-tie casinos, to spy gadgets, to car chases, to key-mashing hackers. We even get a smooth orchestral theme that’s a dead ringer for the James Bond soundtrack! Not only that, but it all ends with the reveal of an old enemy of the Doctor’s that comes back with some new mysteries! Read on for a play by play of “Spyfall: Part One.”

The episode opens with a bang as we watch British agents all over the world fall to a mysterious enemy stalking them all. Just when we’ve processed that, we see Yaz, Ryan, Graham, and the Doctor herself all picked up by men in suits! Also, can we talk about how they had to send double the people for the Doctor than they did for the Companions? Not that I’m surprised, it’s just funny. Another priceless moment is when the Doctor’s “fam” meets Stephen Fry’s “C,” the head of MI6. Rather than greeting 13, C shakes hands with Graham, declaring, “I’ve read the files, the Doctor is a man!” Jodie corrects him with “I’ve had an upgrade.” At least C makes up for his little faux pas by outfitting the gang with some absurd spy gadgets worthy of Doctor Who’s wacky sensibilities, including a laser shoe. Graham gets a kick out of that one! 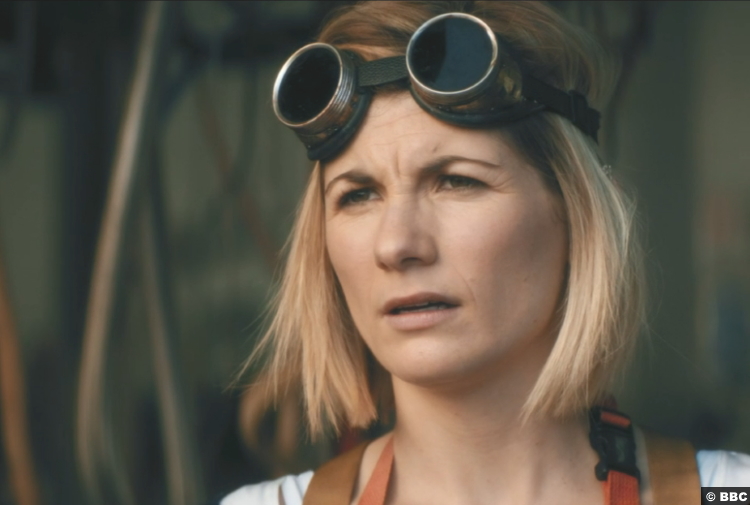 As C tells the gang, it turns out that something is rewriting the DNA of not just every MI6 agent, but also every other spy in the world. From the outside it looks like these agents have been put into a coma, but really their DNA has been completely changed; they look the same, but they’ve been completely erased. The Doctor asks C why MI6 hasn’t prepared for alien espionage in any way and she basically just gets…a shrug? MI6 apparently a. knew Torchwood existed but b. didn’t do anything to prepare for the kinds of cases Torchwood dealt with. Are these really the people we want in charge?

After the gang is split up by an attack on the MI6 base, Ryan and Yaz fly to San Francisco to infiltrate Vor, a search engine tech company that reads like Facebook’s scumminess married to Google’s business model. Yaz, pretending to be a journalist, takes founder Daniel Barton to task for misinformation, cyberbullying, and the surveillance state. This shady character evades the two companions, but anyone who’s watched an episode of Doctor Who can tell there’s something not right about this corporation. Yaz’s surreptitious scan reveals that Barton’s 93% human–hang on, what’s the other 7%? Could this have something to do with the altered DNA found in the murdered spies?

Meanwhile, the Doctor and Graham find O in Australia, where the Doctor tells us she spent about 142 years once–she saw some great rocks. O seems to have been cast from the same mold as Fox Mulder of The X Files, being the only one to have told C that aliens were a valid concern for MI6. Proving O right, glowing figures attack the shack where he’s been staying; the show leaves the nature of these aliens mostly unclear. When asked where they’re from, one being simply says “far beyond,” and when asked if they want our the planet, our galaxy, or what, it says “the universe.” So they’re not just here for tea, we take it. 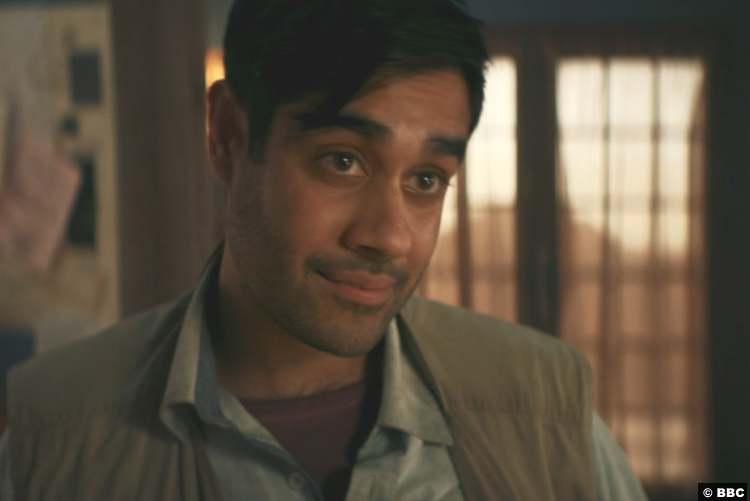 Meanwhile, Ryan and Yaz are snooping around Barton’s office at night, but catch Barton arguing with none other than one of the glowing figures from Australia! Before they have time to split, the figure discovers them and walks through Yaz, transporting her to a strange alternate dimension full of what looks like cacti. Thankfully she’s almost immediately recovered by the Doctor, who extracts her through the body of one of the glowing figures. Seems like these guys really get around. After another attack and a plane crash, this cactus dimension comes up again, and it seems like the Doctor’s going to need a whole other episode to get out of this one because we get “Spyfall: Part Two” next week! 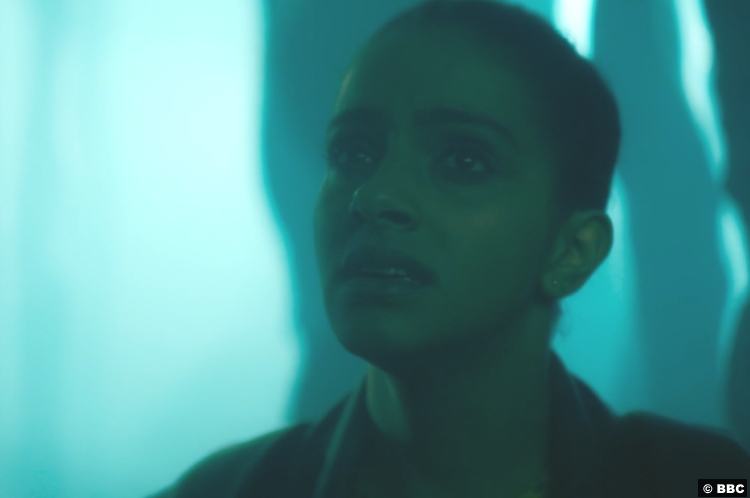 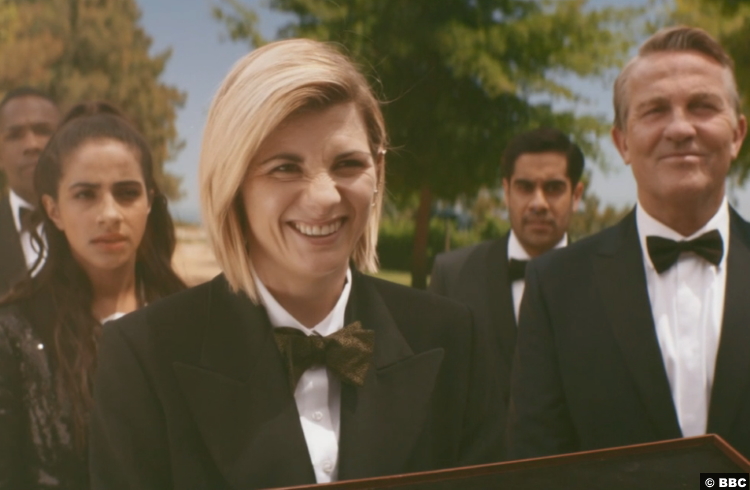 All in all, this episode was more fun than scary, but it’s got some themes that make me excited for the next part of this diptych. The thematic heart of the episode comes towards the end, when O is asked how Vor can supposedly be more powerful than most countries: “Governments are full of people don’t understand technology. Countries rely on outsourcing their expertise to private companies that transcend national boundaries, like Vor.” People like Barton are able to get around organizations like MI6 because they’re streets ahead of their technology, not to mention their preparation for contact with aliens. Since the show has never made it clear exactly how much people on Earth know about aliens, this season could be about humans finally taking an interest in the dozens (hundreds?) of different species that have wreaked havoc on their planet over the past few millennia. It makes sense; after all, the Doctor can’t be there to save Earth every time (or I mean…can she?).

7/10 – Not the most serious season opener, but it opens up plenty of potential! A lot rides on part two–we won’t know until next week why exactly “everything we know is a lie,” as we’re told at the end of this episode. However, “Spyfall: Part One” definitely made me curious!

Spoiler alert! Only read on if you know (or want to know) the reveal at the end! 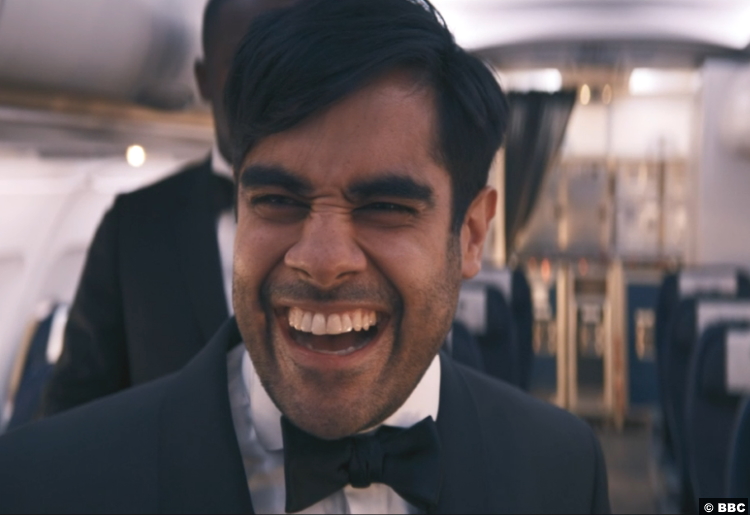 I gotta say, O is adorable. I’m a sucker for Mulder, and I’m a sucker for O’s shyer version of him too. The Master is lucky I’m even more of a sucker for sociopathic alien criminal masterminds, because otherwise I would have been pretty disappointed when O turned out to be him in disguise! My only issue here is that the reveal of O as the “spy-Master” took about half an hour from beginning to end. The moment of the reveal itself was particularly unsatisfying–the Doctor casually questions an inconsistency she finds in O’s backstory, and without even trying to keep his cover he just does an evil face and says “you got me!” Like, she didn’t really…she didn’t suspect anything until you started your whole Villain Monologue™! Either way, I’m always excited for a Master plotline, so I’m eagerly awaiting part two of this episode!