Welcome back to our weekly recap and review of Jodie Whittaker’s stint as Doctor Who! This week’s dose of gallivanting with the Doctor starts when Graham happens to find an offer of a free vacation in exchange for six coupons; inconveniently though, the gang is immediately teleported to this vacation as soon as the coupons are all assembled. They meet an adorable half human and half animal host who guides them through the “all-inclusive” package, plus a cute old couple there on an extended honeymoon. 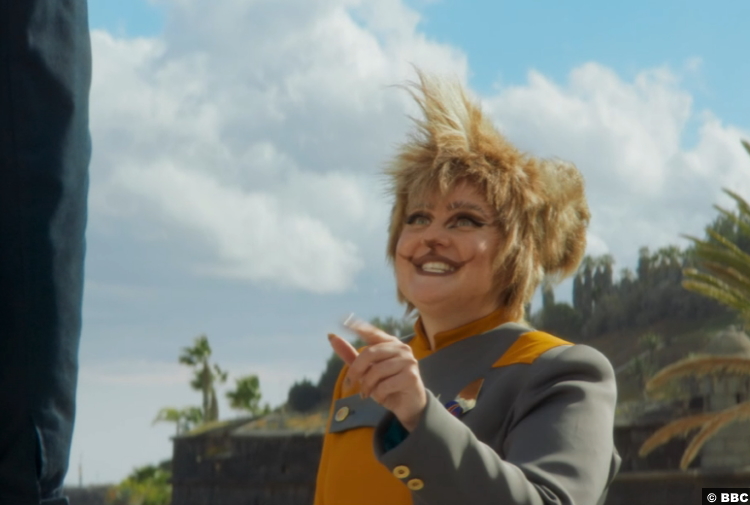 There appears to be a little trouble in paradise; as soon as the friends go off to relax we hear a klaxon and see some military types preparing for a fight. They initiate a duck-and-cover type drill that sends all the spa guests under tables (no word yet on what the drill is for). While he’s hiding, Ryan even meets a cute girl named Bella, who he proceeds to start flirting with extremely awkwardly.

Meanwhile the Doctor, posing as a resort inspector, goes off to figure out how the hopper virus got on board the spa and finds out this spa is significantly better defended than a vacation spot should be. Kane, the owner of the spa and a badass military lady, is determined to keep everything running smoothly, with a couple of deaths here and there being no reason to interrupt anyone’s vacay./ Our furry friend even appears to be fully in the know on the military component of the all-inclusive package the Doctor and her fam have stumbled into!

We then cut to the security team in the hallways, and it seems like whatever’s stalking this resort has some pretty huge teeth. The Doctor soon finds that the planet this spa is built on is as hostile an environment to humans as you can find–that’s why you can only get in and out by teleporting. Any other mode of travel is too dangerous. The problem is Benny, the husband of the old couple they met earlier is missing, and GPS points to his being outside of the protective walls. Once they step outside the walls (or drive out in an armored tank, that is) they see that the rest of the planet is completely uninhabitable, aka an orphan planet. 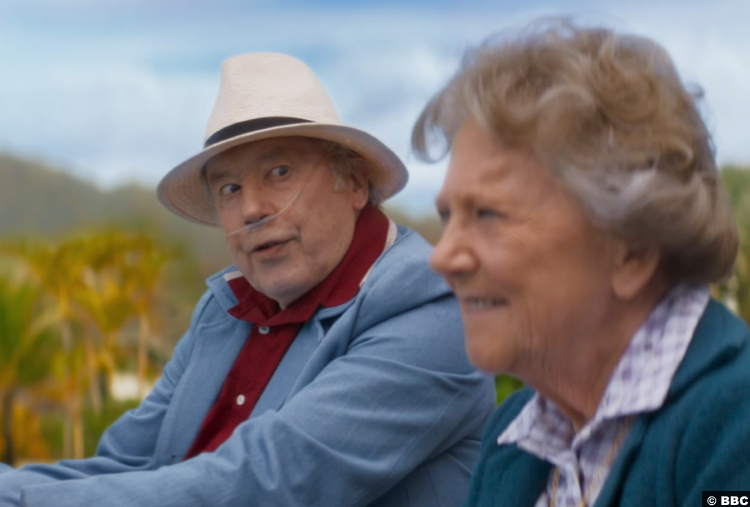 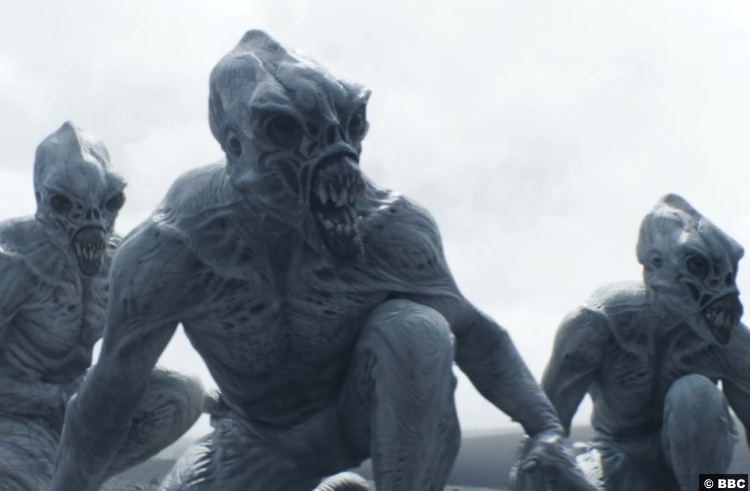 They finally find Benny, and he proposes to his girlfriend Vilma as romantically as can be before a blaster fight with the aliens ensues. The aliens, or Dregs, as the Doctor deduced, are apex predators who became even more dangerous from the climate change. The aliens proceed to kill the poor furry hostess and chase the crew into some nearby tunnels. Benny even gets killed, as he asked Kane to kill him if he was trapped with the Dregs.

Then things get really interesting when it’s revealed that Bella is really Kane’s long lost daughter, out for revenge after being neglected her whole life. As the gang runs around the tunnels trying to keep the Dregs at bay long enough to get the resort guests off-planet, the Doctor now also has to help this mother and daughter reconcile with each other. Turns out, the Hopper virus happens to be the key to whipping up the engine fuel they need to get off-planet, and Kane saving her daughter from a Dreg at the last second was the key to fixing their relationship. Right at the end of the episode things are just as tense as ever in a huge firefight with the Dregs–however, the Doctor has to leave Orphan 55 to save itself in the end, as the vacation time runs out and the gang is teleported back. 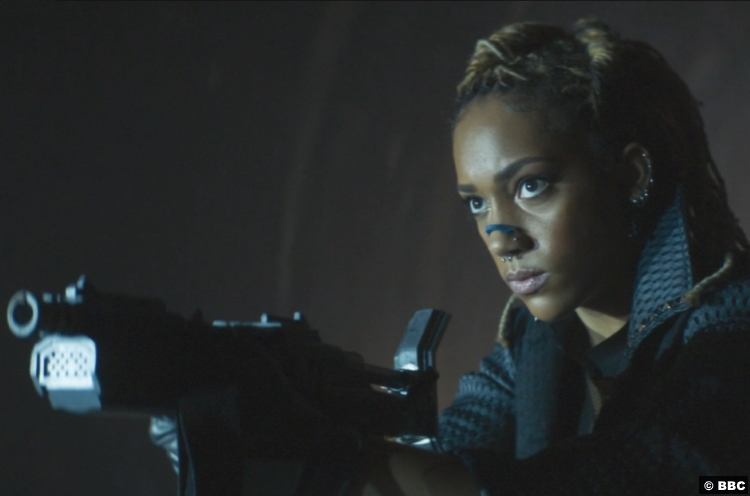 Doctor Who has once again taken on one of the big issues of our time with climate change. The disconnect between the luxury of the spa and the desolation of the rest of Orphan 55 is a pretty great way to talk about people willfully allowing the planet to warm. Interestingly, the Doctor offers a Dreg the opportunity to live peacefully side by side–they convert carbon dioxide into oxygen like plants, so in a suffocating space the Doctor and the Dreg are able to stabilize the environment and both breathe. It’s the Dreg attempting to kill them anyway that ensures one of them will die. Her classic inspirational Doctor monologue at the end is a stirring incitement to get more active in environmentalism, especially when she reminds us that no one future is certain. 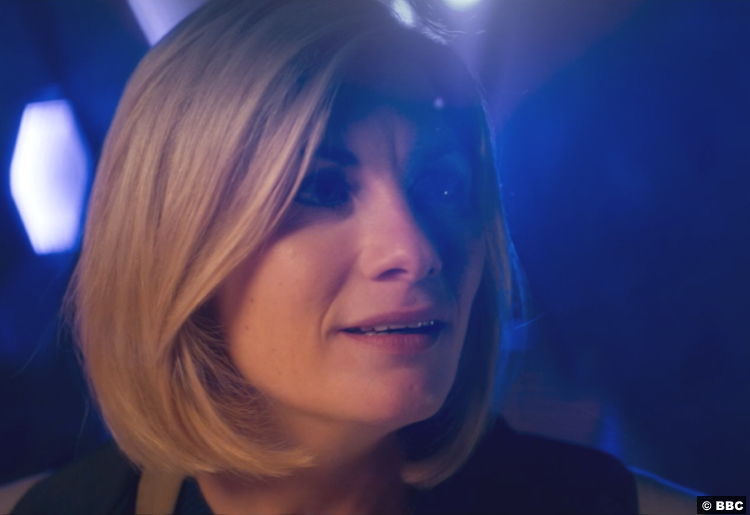 Favorite features of this episode? The wholesome old couple, for one–even if one was killed and the other sacrificed herself for his sake. I mean actually, that just makes it even more romantic. The fact that they’ve seemingly been on vacation for the past fifty years is in line with my relationship goals; I don’t know about yours. I also loved the wholesome father-son mechanic team with green hair that apparently runs in the family, for another.

Not so favorite features of this episode? Ryan’s awkward flirting didn’t really do it for me. It also struck me as a little cheesy when they had that Planet of the Apes moment in the tunnels. Plus, I noticed that this episode had almost too many characters for me to keep track of, and the limited screentime for this episode made it hard for any of them to get the proper amount of development. The result was that many of the moments that could have been more powerful if they had been built up more seemed to come out of the blue, and then got forgotten in favor of yet another rushed moment.

7/10 – The Doctor and Co. get more than they bargained for on a surprise vacation, which gives us some adorable characters and a pretty chilling climate change allegory. However, a couple of bits of this episode ring a little hollow as an unwieldy cast of ancillary characters compete for screen time.