Star Trek Picard S01E02 Review: Maps and Legends – Asks a lot of questions (and that’s it)

We’re two episodes into Star Trek Picard. You can catch our previous review here (score below)…

The advantage to a weekly, episodic show is you essentially are forced, as a writer, to create short stories with self-contained beginnings, middles, and ends. With so many characters in an ensemble cast, you’re forced to spend one week focusing on one or two characters, then switch it up the next week. In this way, the audience never gets too much of one character and the writers have plenty of variety to work with when crafting their stories.

The advantage to a serialized show that’s dumped on a streaming service all at once is, as a writer, you’re able to create one long narrative with a single beginning, middle, and ending, spread out over ten or so installments. In that case, the cast is usually either reduced considerably or kept in groups: Storylines are shared as character-groups go on their own little mini-adventures, before the inevitable big finale. Being serialized, everything happens in a snappy, quick pace, moving from beginning to ending like one, long (but exciting) movie.

There is no advantage to doing a serialized show that’s also released in weekly, episodic doses.

It’s the ultimate square peg/round hole situation. I understand CBS is greedy and wants people to pay for their stupid, sub-par streaming service, so they’re holding Star Trek hostage to do it. But, do they have to be so greedy that they can’t just release all these episodes at once? Of course not, I answer myself, because that would mean subscribing for a month then dropping the service once you’ve finished binging the show.

Picard asks a lot of questions, both the man and the show around him. 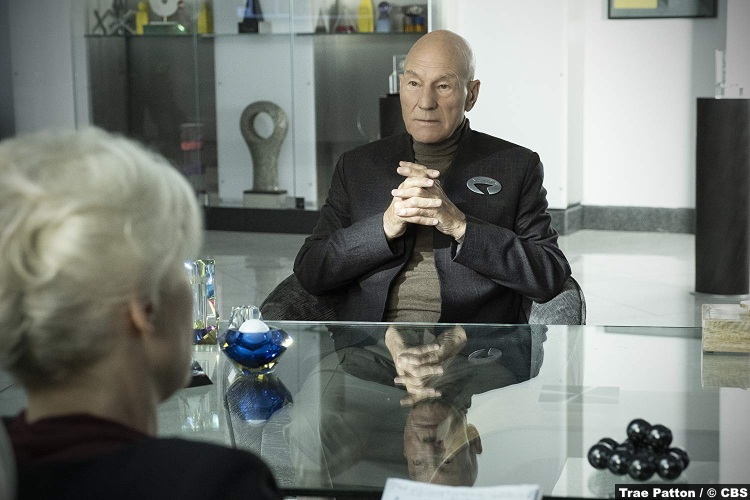 We learn about the Zhat Vash, a secret Romulan organization that’s so secretive, not even the already-secretive Tal Shiar believe they exist…though we don’t know what they want or what they’re planning. We learn what exactly happened when synthetics attacked Mars…though we don’t know why it happened. We learn about Picard’s fractured relationship with the Federation, though we aren’t given enough details or backstory to understand how Starfleet went from an exploration organization (and the Federation from a Galactic peace-keeping organization) to a xenophobic bunch of jerky mcjerkfaces who have the audacity and hubris to say they get to decide who lives and who dies.

That’s some kind of fascism.

And I’m willing to accept it within the context of the story. I’m not willing to accept it if everyone just sort of shrugs and acts like it’s either (A) not a problem, or (B) always been this way.  As long as the show tells me the Federation is wrong for their position I’m going to let the story run its course. There are plenty of Star Trek examples where the Federation and/or Starfleet lost its way. I just need the show to reassure me that, yes, this is wrong and it’ll be set right in due time.

The point is, it’s a mystery. It’s a conundrum. It’s a lingering question whose answer isn’t anywhere close to being answered.

On the one hand, that intrigues me; I want to know more and I want the show to hurry up and drop the other shoe(s). It’s frustrating, therefore, that I’m expected to wait a week for the hopes of answers. I have to wait, not because it’s the right way to tell this kind of ten-part story, but because it allows CBS to milk their subscribes a little bit longer. 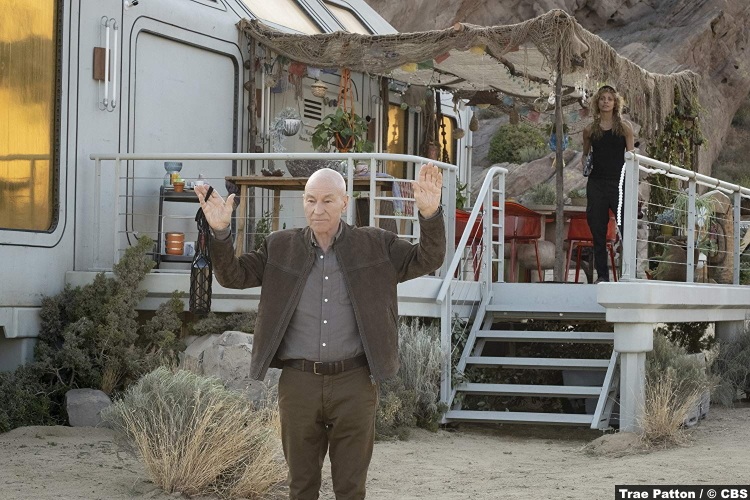 This week’s episode was a step down from the previous. It wasn’t as tight or as gripping and the B-story on the Borg Cube is like watching an hour-long subplot broken into, what I assume will be ten, fifteen-minute chunks spread out over the course of the season. Those scenes are too slow, too uninteresting, and too padded. Any time Patrick Stewart was on screen, however, I was captivated, leaning in close to catch every clue and every hint about whatever the big mystery-reveal at the core of the show will be.

On that note, I have a theory.

It’s said that the Zhat Vash exist within the Romulan Star Empire solely to keep their most devastating secret from being revealed. Of course, once you say that, Writing 101 says “Get ready for the secret to be revealed!” There are soon to be a flood of theories about what the secret is, but here is mine:

The Romulan species is a synthetic race that was created by the Vulcans a thousand years ago.

We’re told that the Zhat Vash have existed for that long, which means they predate the Romulan-Vulcan split. We’ve never been given any concrete details about why the split occurred, though it’s always been assumed it was because they didn’t want to go the way of emotionless, logical (eh hem, “machine-like”) Vulcans.

On that note, someone might have the idea that it’s the Vulcans who are the synthetics. After all, they are already emotionless. To me, that would be a bad idea. The Vulcans are emotionless by choice and there’s plenty of examples to draw from where they let their mask slip and became passionate people.

Likewise, it wouldn’t make sense for that to be the secret the Romulans didn’t want to get out.

After all, which is more reasonable: That Romulan super-spies would know that Vulcans (whom they hate) are synthetic, but choose to keep that info a secret,

They know the Romulans themselves are synthetic, and are keeping that a secret, knowing it would descend the Empire into chaos?

I think the latter is, if I may, more logical.

So my theory is that the Vulcans created the Romulans to be exactly what they wanted themselves to be: emotionless, computing, logical robots. But, maybe they made them a bit too well and they ended up making a race so life-like they chose to be emotional and rebel against their makers. Of course, the answer to the show’s big mystery could be something else entirely.

I just wish I didn’t have to wait for the show to slowly answer all of its many questions.

8/10 – Picard’s second outing is a solid half of an episode, that itself is only an okay one-tenth of a story. I need more.