When you’re a teenager, you don’t really understand adult relationships. Even if your parents are still together, you just don’t have the personal experience. It’s easy for you to romanticize things, because you’ve never had to consider the consequences, not really.

Of course, that’s not to say that only teenagers are susceptible to this kind of thinking. If you’re an adult, for example, who didn’t really get to do the things you wanted to do as a teenager, then you might romanticize the possibilities, too. And you might act like a teenager. 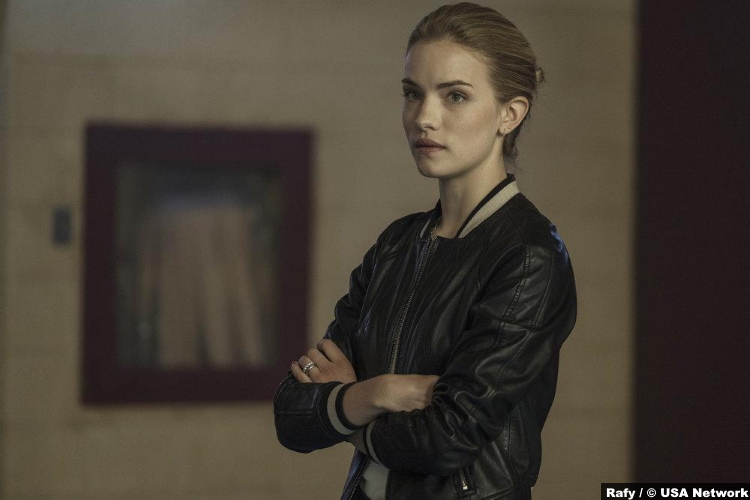 You can see this in Colette, in the way she reacts after the incident in the woods. She tries to walk a fine line between treating the girls like adults and talking to them like she’s their elder. With Addy, it’s obviously going to work. She may have known Coach only a little bit, but it’s clear that she worships her. But Beth, on the other hand, is going to be a problem.

Addy, who probably knows her better than anyone, realizes this immediately. That Colette doesn’t is strange. Then again, it’s entirely plausible that she didn’t see the phone. But Addy did.

And in defense of Coach, in service of her almost, she steals that phone from her best friend. It may not seem like much now–not that big of a betrayal–but it feels like foreshadowing. What else would she do for Coach? She did this on her own, but what would she do if she were asked?

In the end, the phone turns out to be a non-starter, as far as Addy knows. She finds a video, but it’s just a truncated clip. It doesn’t really show anything. What Addy doesn’t know, of course, is that the clip, found in the phone’s trash, is an actual discard. Beth has a longer clip that shows both Colette’s and Will’s faces. 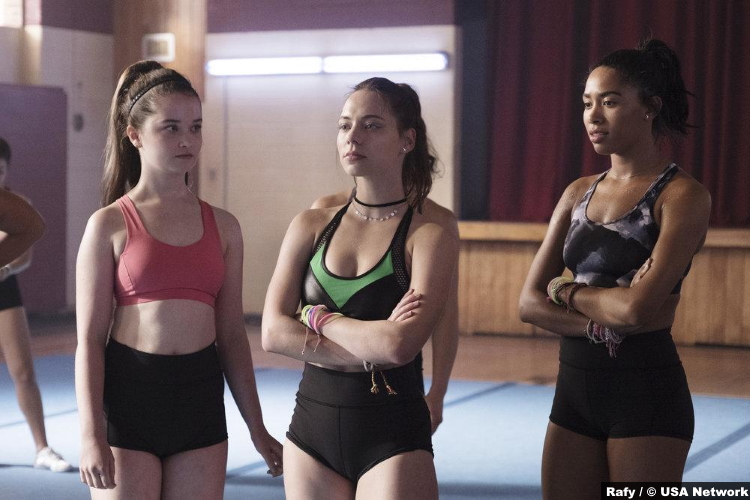 But for the moment, that video isn’t the most important video to Colette or the girls. What does count is the video they’ve been asked to submit for a competition. It’s going to require a lot of hard work, and you know, Beth just doesn’t strike me as the kind of gal who likes to work hard. (Which, yes, makes it hilarious that it was her dad who brought Colette to town.)

And that goes double if her half-sister Tacy is picked to be top girl. Tacy has the nerves of a long-tailed cat in a room full of rocking chairs, but given encouragement and practice, she could do well. She’s a girl who would work hard.

I have a feeling that Beth is still going to whine about it, though. In the meantime, she finds some distraction at a local bar in a scene that I would rather never think about again. It’s not like some scenes I say that about, where there’s violence or cruelty that’s hard to watch.

No, in this case, it’s Beth and Riri (Taveeta Szymanowicz), another cheerleader, doing a stomp routine in a local bar. It’s not so much the stomping, although that doesn’t help, but the too cutesy by half chant they’re doing as well. I want it to end. I want to get in the sea. 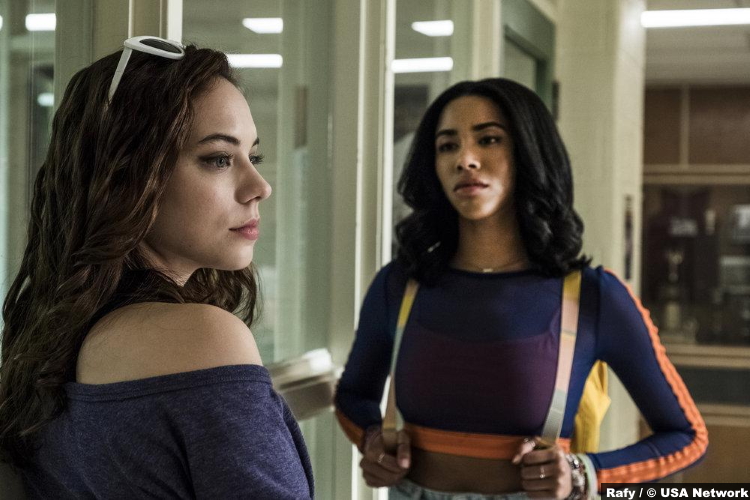 Whew. That was the worst. But of course, that’s just a moment’s discomfort. There are worse things on the horizon.

After she runs into Will, who still has Colette’s barrette, Addy takes it as an opportunity to visit Coach. She’s had her head filled with Will’s description of Colette in high school and you can practically see the swooning. It is painfully obvious that he was in love with her (and probably still is).

So even though she knows Coach is married–she even meets Matt on that visit–Addy encourages her to go to Will, like this is a bodice-ripper. Like it’s romantic.

But it also gives Addy the time to lounge on Colette’s bed, with its 1200 thread-count sheets, and dream it’s her life. You can’t just wait for things, Coach tells her. You have to take them.

But in a flash-forward, as the blood spreads on a carpet that looks like Will’s, it’s a reminder that you can’t always have whatever you want. And sometimes, when you take it anyway, that’s when you learn about those consequences.

7/10 – While this wasn’t a bad episode, it felt a little slow. The pilot last week set up a lot of this stuff, so it’s unclear why we’re still treading water with it. We know in three or so months, there’s going to be a big pool of blood, so there should be a greater sense of urgency.