Based on Megan Abbott’s book of the same name*, Dare Me is USA Network’s latest mystery series. A series about Rust Belt high school cheerleaders may not seem that intriguing, but small towns can hide big secrets. 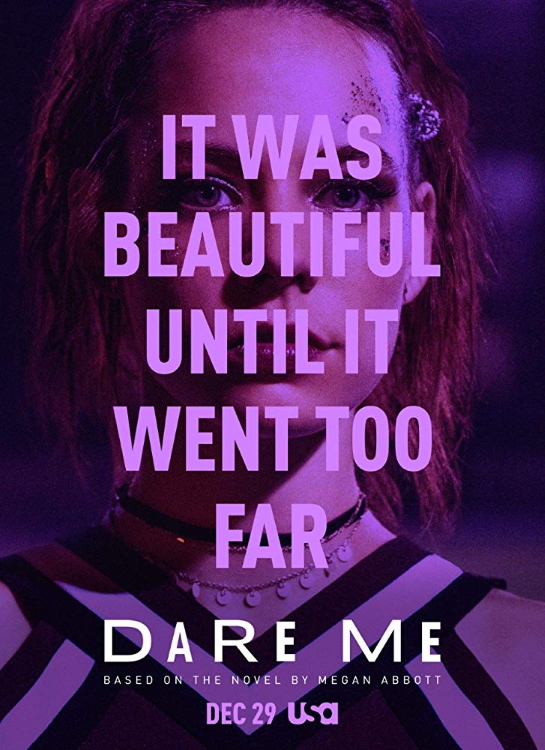 This particular small town, Sutton Grove, is home to a reasonably capable cheerleading squad. However, they could be better. As such, the local boosters, having pretty much given up on the football team, have hired coach Colette French (Willa Fitzgerald) to whip the girls into championship shape.

The girls we get to know the best are Beth (Marlo Kelly) and Addy (Herizen Guardiola). Beth is most charitably described as a firecracker. She’s the kind of girl who acts out a lot, probably because her dad Burt (Paul Fitzgerald) is living across the street from her and her mom. And he’s living there with his wife and daughter, Beth’s half-sister Tacy (Alison Thornton), while still coming over to “visit” his ex-wife. 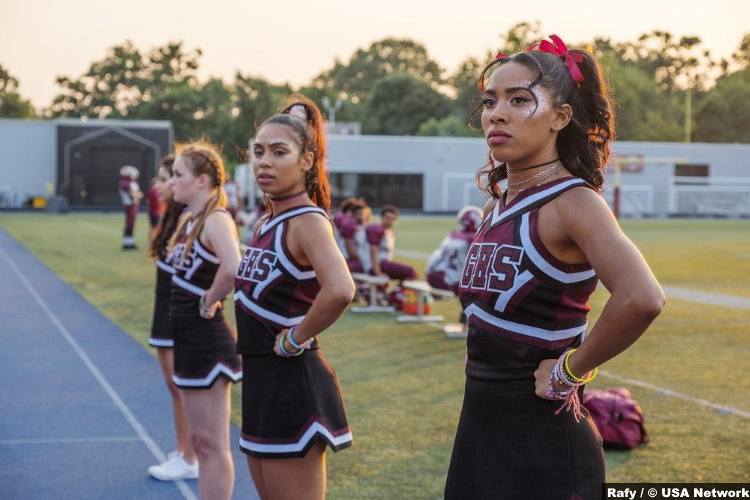 While Beth dismisses Colette as an “ancient” 28-year-old who’s had the ignominy of moving back to their hometown, Addy sees her as a way out. Colette has steered squads to championships before, and that’s just what Addy needs, if she wants to earn a scholarship.

Colette is tough, but despite the harsh comments she makes about the girls’ weight, she’s not some caricature of a hard-ass coach. She cares about doing a good job, and if the girls put the work in, she’ll be there to support them. And Addy wants to put the work in.

This ends up putting her at odds with Beth, who just sees her place on the squad as “top girl” being usurped by her half-sister and her best friend’s attention stolen by Coach. This could be dismissed as pointless teenage drama, but as Addy says at the beginning of the episode, quoting Coach, “There’s something dangerous about the boredom of teenage girls.” And we have danger foreshadowed for us right away, as Beth livens up a party in the woods by firing a gun. 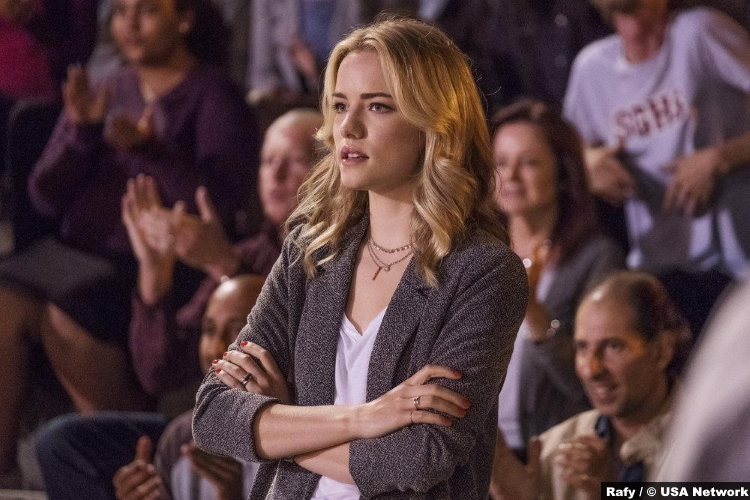 She’s already had enough change in her life, and she feels like she can’t stand anymore. But of course, she’s not the only one with problems.

She and Addy drive by Colette’s home, where she lives with her husband Matt (Rob Heaps) and their baby. From the outside, it looks beautiful and cozy, a warm family scene. And it is, for the most part. That is, until Matt finds out why they really moved back to Sutton Grove.

He thinks it’s because he got a job offer. Then he finds out that Burt Cassidy, his new boss, hired him mainly so he could get Colette back in town to coach his daughters. It was never about him–she was the main draw, and he can’t help it from hurting.

He’s not particularly mean or cruel about it. But there’s a distancing there that hints at problems in their marriage. And then we see more than a hint. 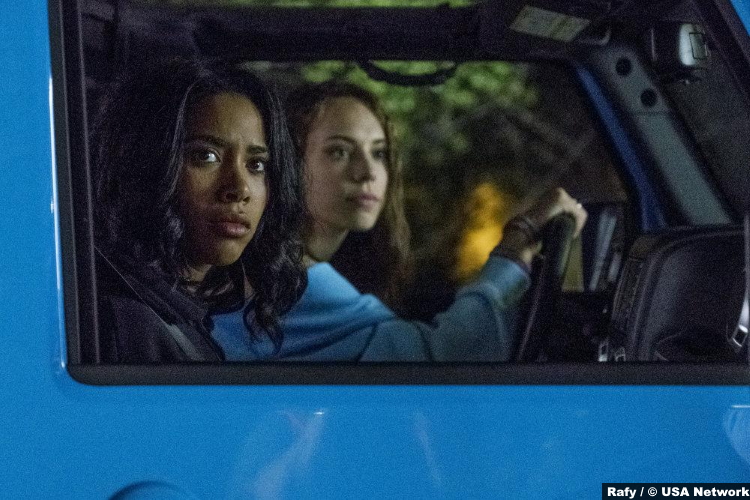 After they’ve returned from that party in the woods, Beth can’t find her phone. She and Addy go back out there, where they’re startled by the realization that there’s a vehicle parked next to the party site. It’s clear that the couple inside is having sex, so of course, they go look. (They are teenagers, not saints.)

To everyone’s surprise, it’s Sarge Will (Zach Roerig), Sutton Grove High’s Marine recruiter. And on top of him, Coach Colette. Beth takes a picture and then she and Addy run away, as Addy pleads with her not to tell anyone.

“In the end, I couldn’t stop it. Any of it,” Addy says in voiceover. And she could just be talking about the infidelity, but this episode begins 3 months after this time period, as Addy drives somewhere with blood on her hands.

8/10 – This was a fairly typical pilot episode–lots of tablesetting and introductions. That doesn’t mean it’s bad, though. On the contrary, while it lacked real thrills, it did succeed in creating a world that feels real and lived-in–a world primed for everything bad that’s to come.

The art of this show is in its construction. It’s cleverly disguised an exploration of female friendship as a (maybe) murder mystery. But as anyone who’s been a teenage girl can tell you, the fraught tension of teenage friendships can make you as anxious as any good mystery.

*Yep, it’s ya girl back with another book adaptation.