The Star Wars Holiday Special: Getting a rise out of any Skywalker

Since Disney set December premiers, Star Wars has become a movie-going holiday tradition. But George Lucas’ imaginative creation is no longer his own, and some say Disney is aiming a loaded canon at the rebel fan base.

These new movies and spin-offs aren’t the first Star Wars to stun the holiday spirit, though.

Have you heard the comedy of the cheapest Star Wars spin-off there ever was? Well, grab some blue milk and Wookie-ookies, because Saun Dann is coming to town.

After the popularity of A New Hope, CBS suggested that George Lucas create a holiday special. In the interest of keeping Star Wars spirit alive, Lucas agreed. However, George was busy moving his production company. So, Master Lucas simply left CBS his sacred Wookie texts and a cool design for Boba Fett. George imagined a spin-off set on the Wookie home world; no more, no less. 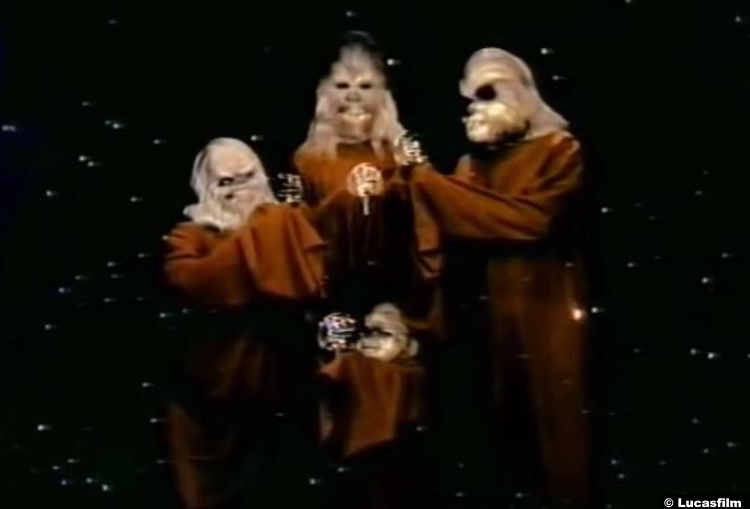 Well, imagine a movie with heavy Shyriiwook dialogue and no subtitles. Even Chewbacca would balk.

The CBS team rewrote their script with five different variety of TV writers, who jammed the transmissions with comedy skits and musical numbers. TV production works in a narrow margin of parsecs, too, and director David Acomba felt the project’s pace asked the impossible. He was soon replaced. 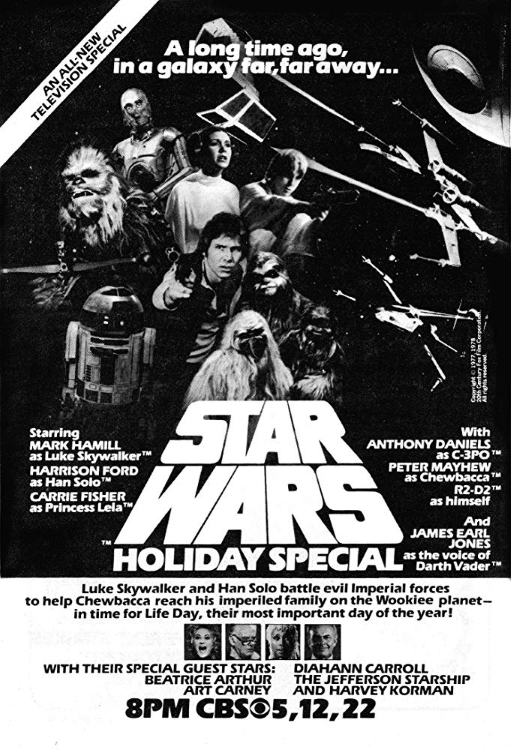 The holiday Disney films have their own fallen order of directors. But still, Rogue One’s directorial digressions between Gareth Edwards and editor John Gilroy aren’t that bad by comparison.

Han Solo and Chewbacca run blockades to get home for Life Day, and so the Empire suspect rebel sympathies somewhere on Kashyyyk. Chewbacca’s family must team up with the rebel trader and Star Wars Santa Saun Dann, and wacky hijinks ensue. 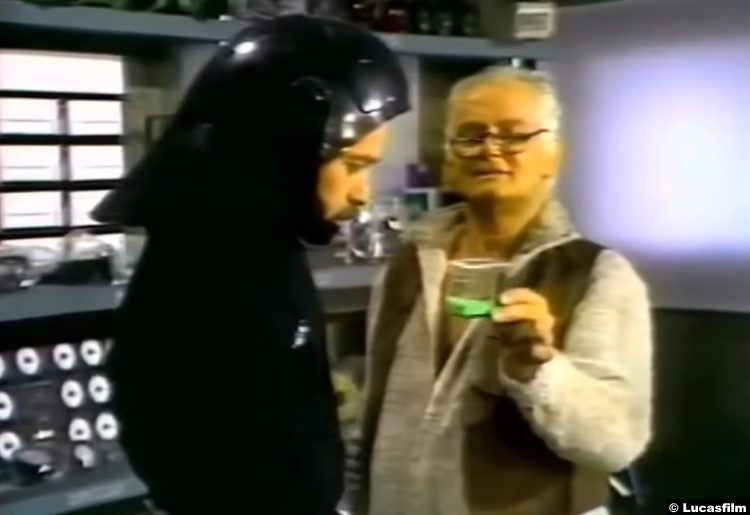 The Empire comes to Chewie’s house, and the only way to outwit them is with Saun Dann’s trusty contraptions. They give an imperial officer a device – which distracts him with Jefferson Starship. Meanwhile, Chewie’s little kid Lumpy sets up a micro-transmitter, to trick the imps into leaving the treehouse. 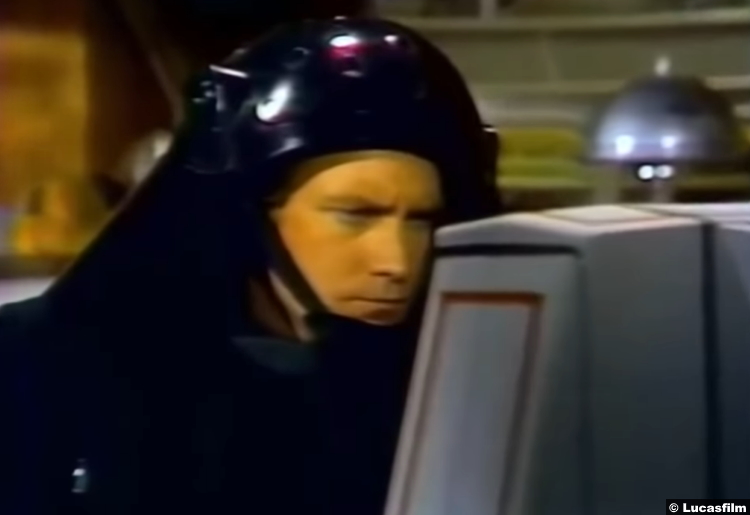 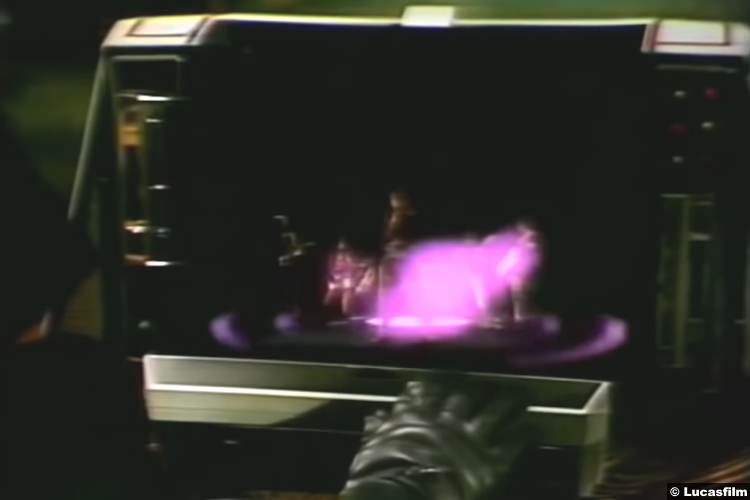 Also, an Imperial broadcast system televises a mandatory message of life on Tattooine. The troopers occupying the house proceed to watch a sizzling klezmer rendition of the Cantina Band. The Empire is enforcing curfew – but don’t worry! The singing barkeep Ackmena reassures each customer that they will be well, friend. 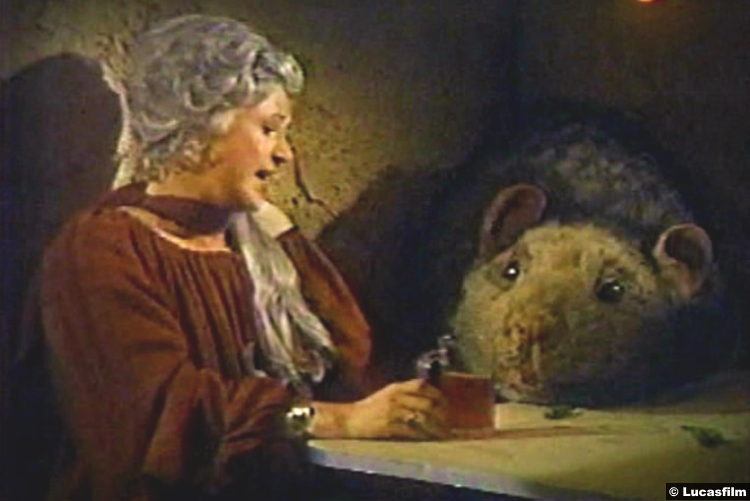 Although the Holiday Special shows martial law under the Empire, just the Jakku raid at the beginning of The Force Awakens is far more convincing. Even when the Empire invades the Wookie house, all the Holiday Special (holo)screens just keep segueing into the musical numbers that make the special a weird Force dyad of Star Wars and TV variety show. 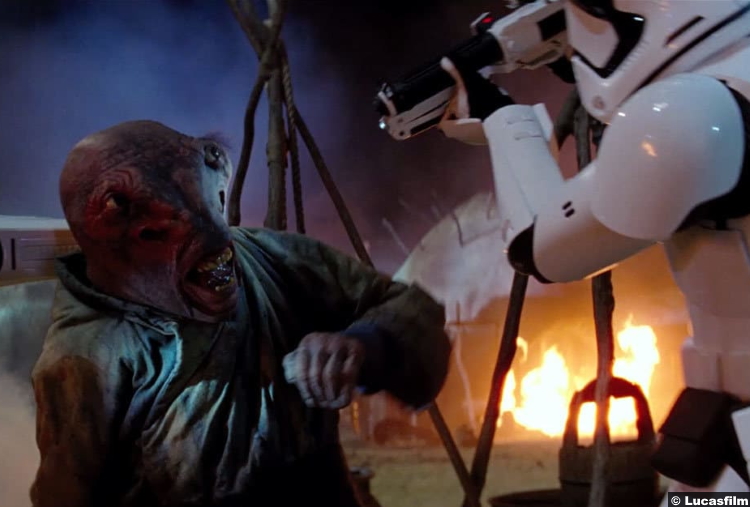 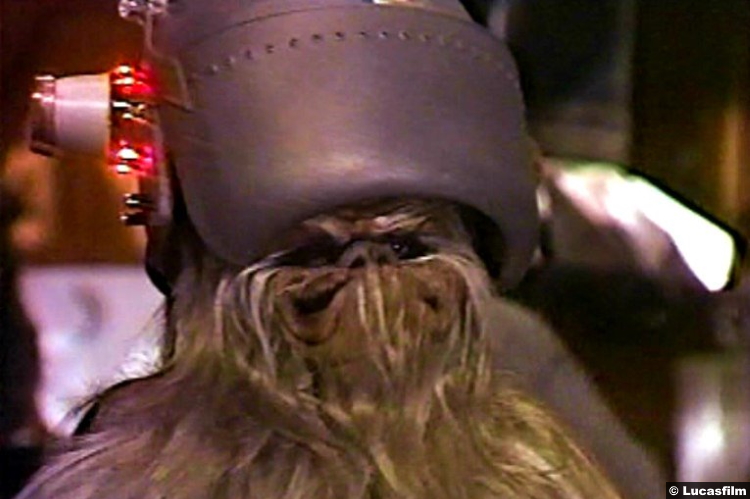 On the main set, the flooring of the house resembles astroturf. When the Wookies contact Leia and Threepio, their rebel base looks like a Flash Gordon hand-me-down. Granted, Flash Gordon fan-fic was Lucas’ idea, but even Jawas wouldn’t salvage these sets. 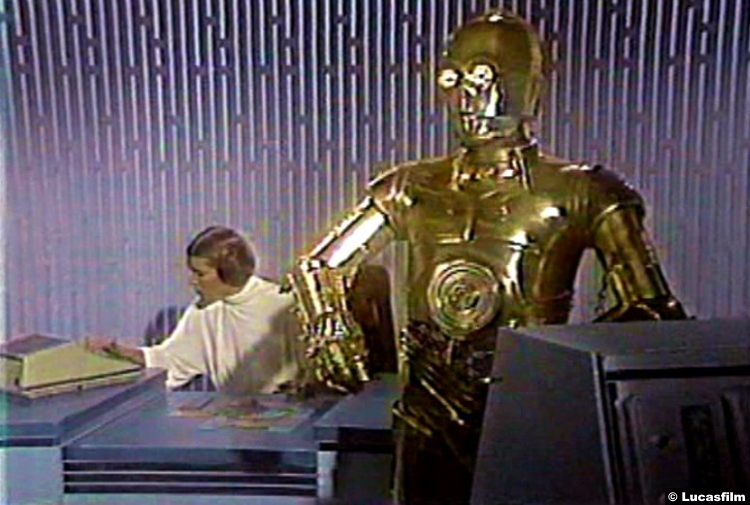 The Holiday Special’s shot composition is lousier than a stormtrooper’s aim, too. The video call between the Wookies and Luke is a static straightaway at the Jedi’s face. No matter how angelic that face, the heavy makeup and unflinching stare is a bit much. 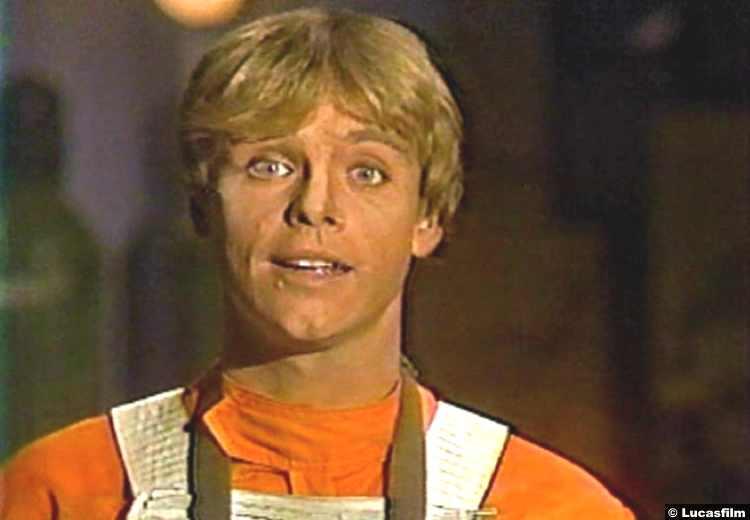 Say what you will, but 2017’s Star Wars Christmas surprise of the Last Jedi wrapped up Luke in a much nicer holiday display. 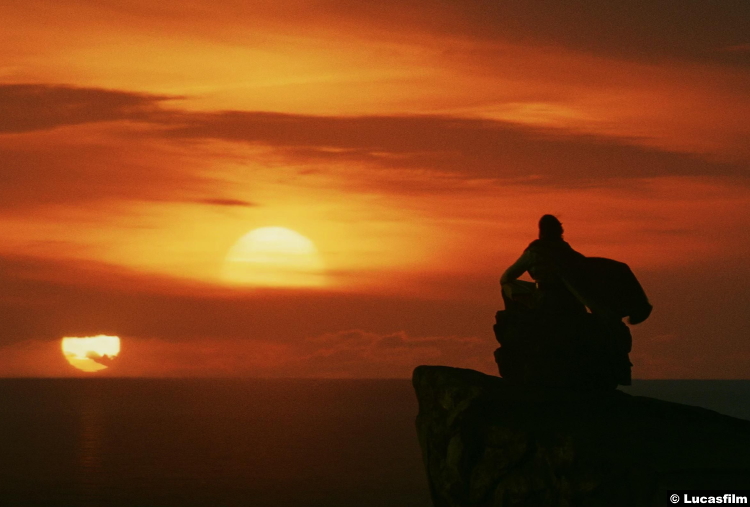 The animated segment of the Holiday Special was the first look at the multi-faceted Boba Fett. Or maybe, the only look at him as a multi-faceted Mando. 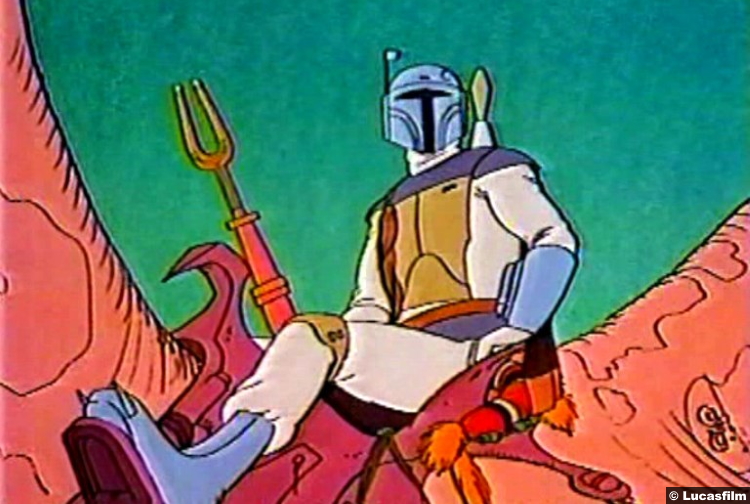 Boba Fett’s introduction as a double-crossing desperado shows him help then betray Luke and the gang. Before he escapes, though, he thoughtfully addresses them as “friends.” It’s a bit more character than being Vader’s quiet errand boy.

But, take his sullen apprehension to friendship and give him a baby Yoda in place of the big red Mythosaur, and you end up with someone like The Mandalorian’s Mando. He even carries the same disintegrating “no disintegrations” Amban rifle. 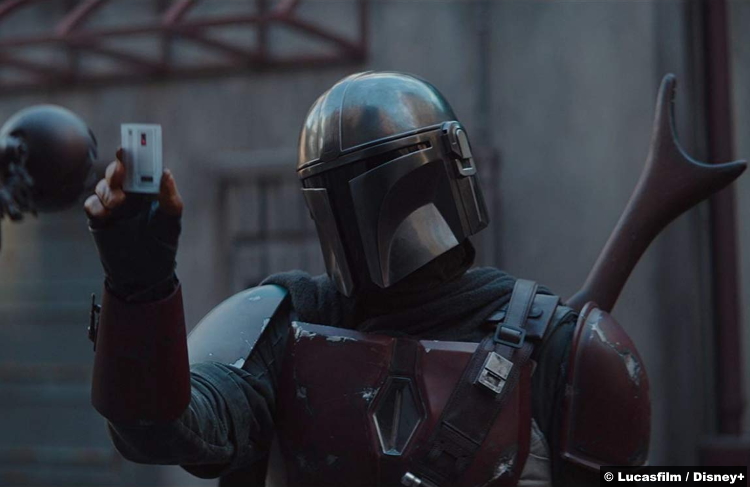 Mandalorian showrunner Jon Favreau wants to make a new Holiday Special. What are the odds?

Learn to Play Your Valachord

Starship are a great band, so the sight of an Imperial naval trooper’s super-enthused smile watching Jefferson Starship is understandable. It doesn’t have that otherworldly warble you’d expect from (early, pre-Special Edition) Max Rebo, but what else would you expect in George Lucas’ absence? Carrie Fisher channeling Joni Mitchell? Well… 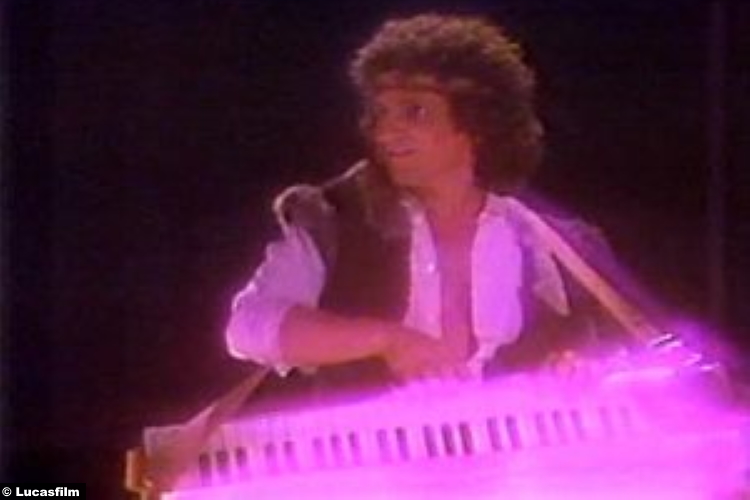 Even when pop tunes are integrated in-universe, they are as much a gamble as Canto Bight. But the Mandalorian has hedged the Fett bets.

Who could succeed jazz-trained Jedi Master John Williams? Why, none other than the hip-hop producer and Grammy winner Ludwig Göransson. He orchestrated the grand soundtrack for The Mandalorian. Not only does Göransson brandish the brass and strings like Williams; he also worked some sly trap high hat rhythms into the end of Mandalorian episode 6. 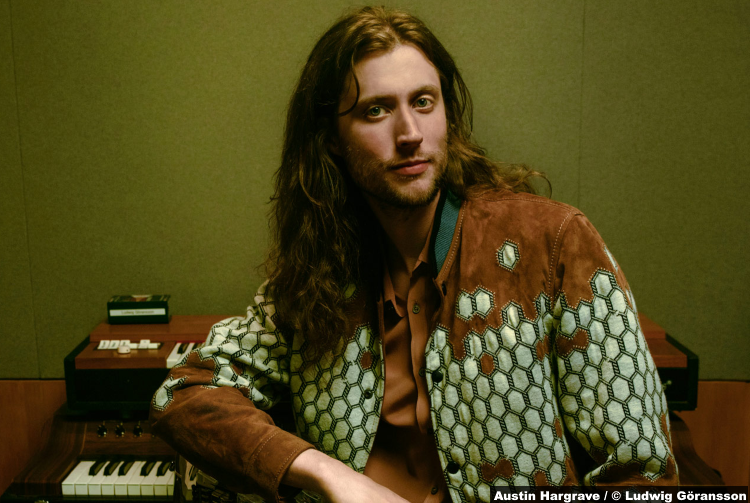 Pop musicians are no longer a forgettable Holiday Special footnote – they’re making the motifs with Disney.

Just when the wit of the Wookies seems to fail, Han Solo and Chewbacca arrive. Han’s hasty shuffle trips a trooper out the treehouse with a Wilhelm scream – and just in time for the final musical number. 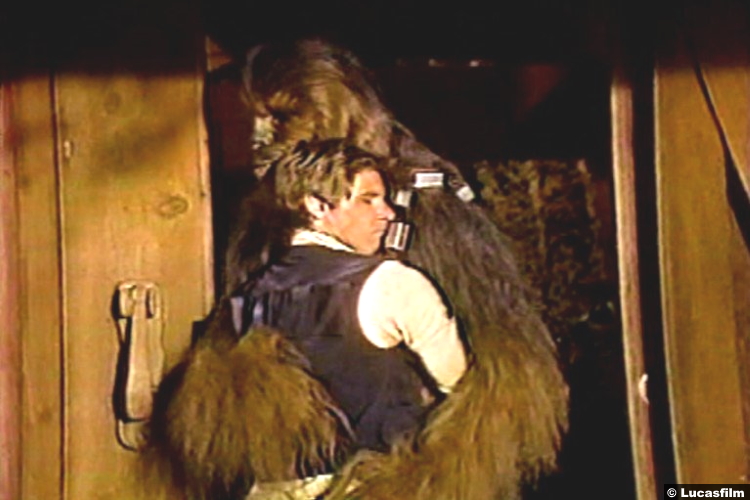 As the Wookies don their robes, everyone heads to the tree of life. Luke arrives, and Leia begins to sing.

It’s confusing that this cuddle feels so fulfilling after all the singing and Wookie television. But, it’s heartwarming to see the original cast hugging after they all made it home. In retrospect, this holiday hug from 1978 was the last time a Star Wars movie outside Lucas’ supervision brought the original trilogy’s living heroes together. 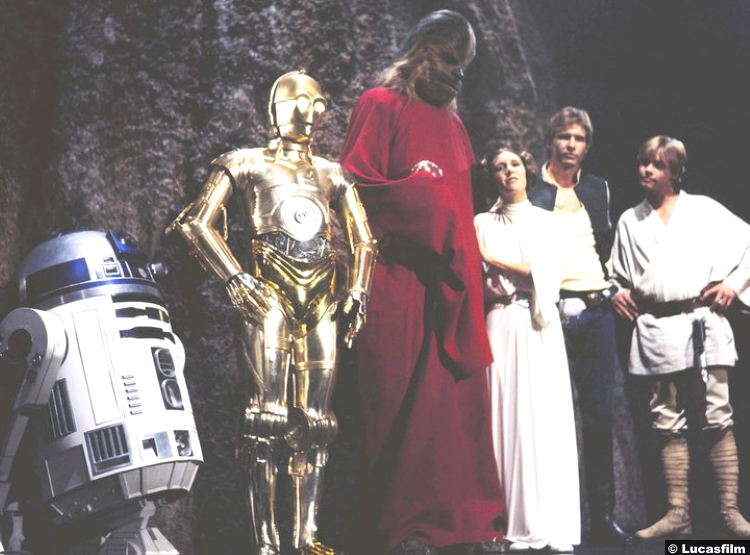 Even so, it can’t compare to the holiday memories of 2015. You know, that moment when Han turns to Chewie and says “Chewie … we’re home.”