You’re not clever. Breaking down (and breaking up) The Stormtrooper Conspiracy

Fan theories are a fun diversion. They offer long-time enthusiasts of a movie, book or TV show a chance to take a second look at an established property. You get to reexamine a franchise you’ve experienced a thousand times in a whole new way. The problem comes when we forget that fan theories are just that: fan theories, and should not be looked at as the official interpretation of the franchise. There is a French philosophy that argues that the viewer of an art piece has the right to interpret it however he chooses, even if the interpretation differs wildly from the intended meaning of the painter. This is the genesis of “fan theory” and it’s not a philosophy I subscribe to. As far as I’m concerned, the piece is whatever the creator intended and any opinions I may have about the piece is just my opinion and doesn’t really matter.

If you’re not down with that, then this article will probably mean little to you. 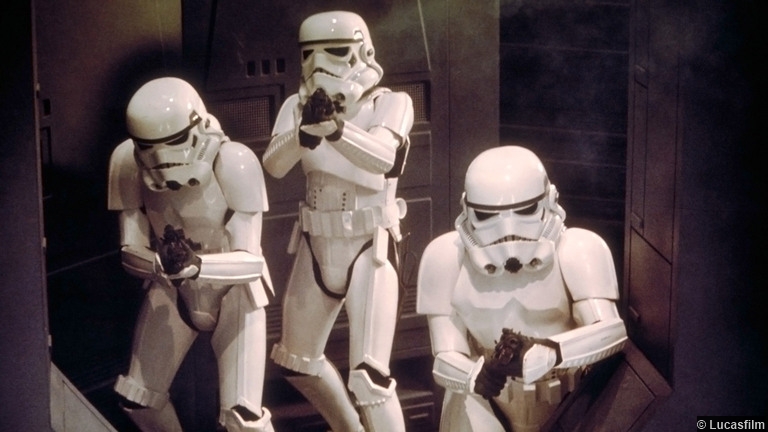 Recently there has been circulated a fan theory that seeks to explain why the heroes of Star Wars never seem to be in any real threat by the forces of the Empire. Remember the famous scene in A New Hope, when Luke and Leia swing across the chasm (complete with “good luck” kiss on the cheek)? Several Stormtroopers on a higher level rain blaster fire down upon the heroes as they prepare to make their swing, but never does a shot come anywhere close to the heroes. On the other hand, Leia’s aim is perfect and she nails several troopers square in the chest.

Obviously, it’s a movie. That’s it. That’s the explanation. The heroes have better aim than the villains because the villains are expendable whereas the heroes are not. It’s a movie. The only time the heroes get hurt is when the plot demands it. Then, and only then, do the villains suddenly turn into the ruthless killing machines the heroes make them out to be. That’s the way it is in movies. It’s the magic of movies, if you will, that all cinema-goers subconsciously accept. It’s part of the suspension of disbelief we go along with in order to enjoy the film.

Star Wars fans, however, are a notoriously loyal and zealous bunch. Many refuse to see any problem with the movies, especially the Original Trilogy, so any flaw—no matter how small—is either dismissed or, in the case of this fan theory, is explained away with faulty logic.

What is the theory? It goes back to the horrible yet hilarious aim of the Stormtroopers. The meme is that they can’t hit the broadside of a barn. For example: 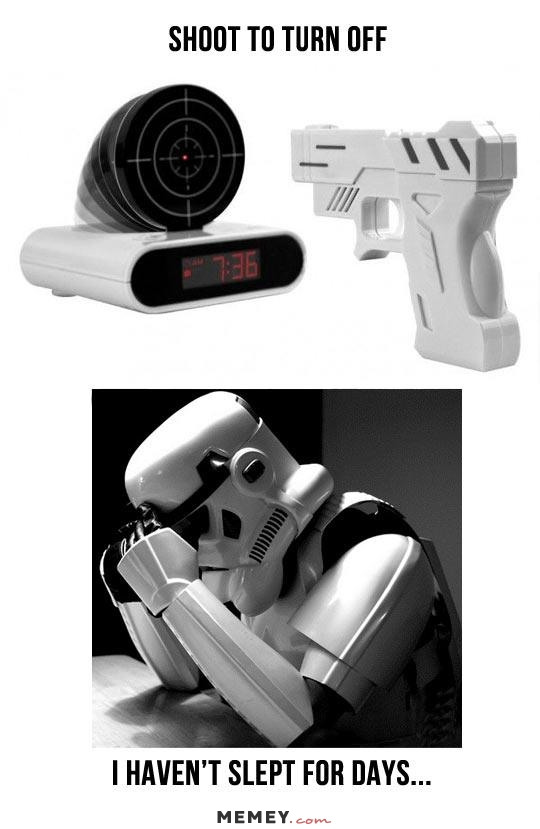 Not to one zealous fan. He came up with a theory that explained away the poor aim of the Empire’s finest soldiers. Here is a condensed version of the argument…

It’s a wonderful theory and when I first read it I thought it was hilarious. Unfortunately the funny fan theory has become—to some fans—understood law. On reddit, Star Wars fans are quick to interject the theory into any discussion that pokes fun at Stormtroopers. Post a meme like the one above and you can be sure some fan will be quick to mock your stupidity for thinking the Stormtroopers have bad aim. Silly you, they will say, the Stormtroopers missed on purpose. It was all part of the plan, they will say, and they will say it will utter sincerity. The fan theory has become confirmed fact, without ever being confirmed either by George Lucas or by a more precise study of the movies.

Even though it’s just a silly theory it bothers me when I see ignorance smugly peddled. So I am moved to correct this fan theory and put it to rest once and for all. For the good of nerds everywhere I go.

First of all there is a flaw in the logic of the pictorial theory. Particularly with this section… 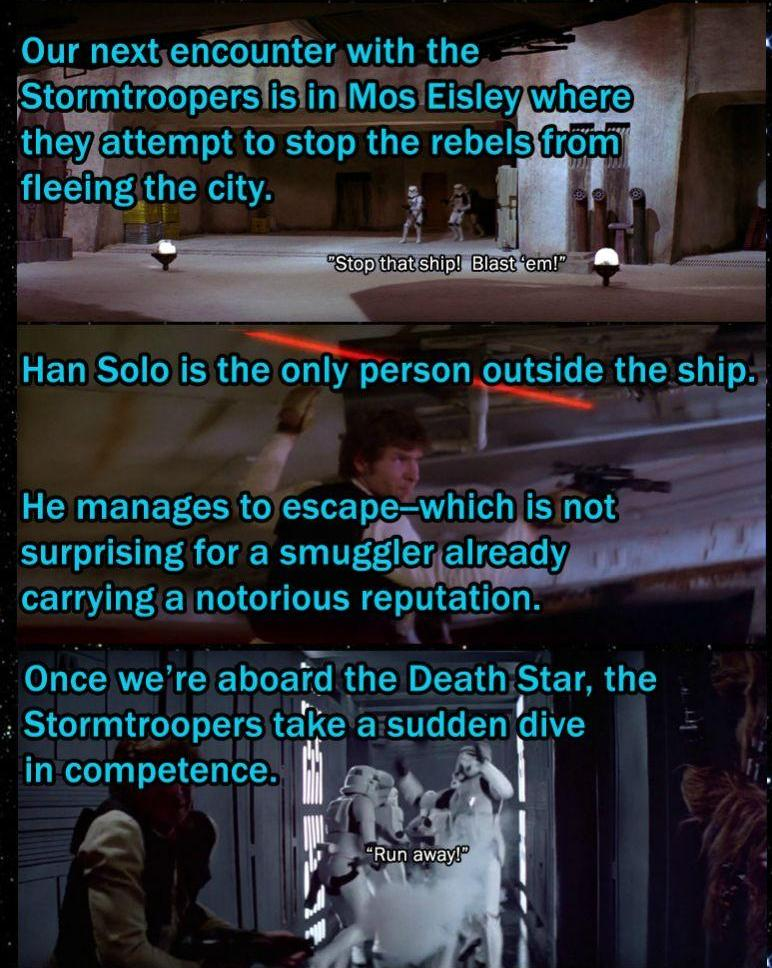 Notice how the theorist glosses over Han’s escape. He mentions something about Han being a smuggler and thus used to escaping from the Empire. And sure enough he proves his escapability when he maneuvers the Falcon away from the StarDestroyers in pursuit. But back on the surface of Tatooine, it’s not his smuggler/pirate/mad skillz that saves him; it’s the missed-shots of the supposedly lethal Stormtroopers. They miss him high, low and to the side. They hit nothing. Why? Because it’s a movie and Han’s not expendable.

It wasn’t on the Death Star that they took a “sudden dive in competence” it was always there as the plot demanded it.

Later the theory misunderstands the remark by Leia that they were being tracked, and the remark by Tarkin that the homing beacon was placed on the ship as proof that the Troopers were missing on purpose (and, as the theory goes, were simply funneling the heroes back to their ship).

This is not the correct interpretation of the scenes in question. Leia didn’t say “they’re tracking us” because she wisened up to the Empire’s Stormtrooper plot. She said it in response to the mere handful of TIE fighters the Death Star sent after the Falcon. Tarkin calls it a risk to let them go, and says to Vader “this had better work” which implies it was Vader’s idea, not Tarkin’s to put the homing beacon on the Falcon.

The other major flaw in the theory is the Stormtroopers horrible aim in later movies. According to the theory, the only reason the Troopers had bad aim was because they were intentionally missing on the Death Star. So why were they such horrible shots in Empire Strikes Back? Recall that, as the Falcon was preparing to chase after Boba Fett, Leia was providing cover fire and was nailing Troopers left and right, meanwhile the villains couldn’t hit anything. Were they missing on purpose too? Obviously not. They were missing because it’s a movie and the plot demanded it.

In Return of the Jedi several hundred Stormtroopers were embarrassed in defeat by teddy bears. End of argument.

We take our entertainment way too seriously. And if you don’t believe me, consider the fact that you just read 1,200 words that set out to debunk a fan theory about a movie series.

I need to rethink my life.