Philip Pullman’s His Dark Materials trilogy began in 1995 with Northern Lights (called The Golden Compass in North America and other places). Although the trilogy would attract a healthy fanbase, it was somewhat overshadowed by another book series about a young wizard. And while I read the first wizard book and thought it was fine, I fell in love with His Dark Materials. That is to say, I have one tattoo and it’s a Philip Pullman illustration. So yeah, I was pretty hyped for this TV show. 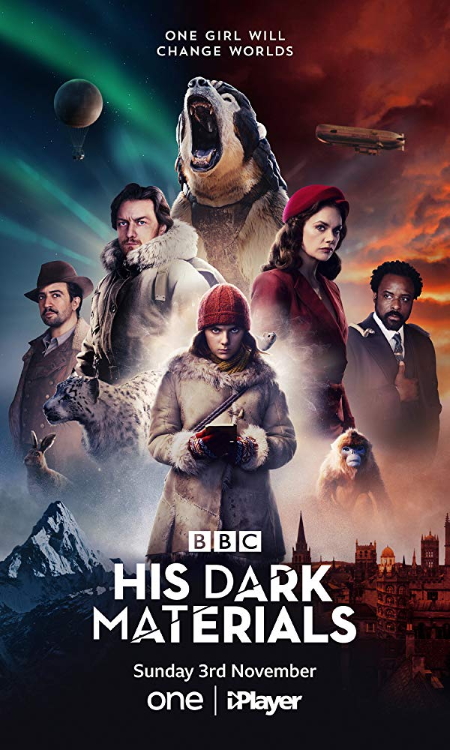 There have, of course, been adaptations of the trilogy before–it’s been onstage, a radio play, and of course, the under-performing film The Golden Compass. But a TV show offers a lot of tempting possibilities. For one thing, you have the space and time to tell a story properly–you don’t have to wrap it all up in an hour and a half or whatever. And for a world as big as Pullman created, you need that space and time. So let’s go to another world, shall we?

As the beginning text tells us, it’s a lot like our world. It has the appearance of our world, but many things are just a bit off. The people look the same, but they share their world with creatures that don’t exist in ours. They have daemons, a kind of animal manifestation of their souls, for example. And when you’re a child, like little Lyra Belacqua (Dafne Keen), your daemon–which talks, by the way–isn’t fixed. That means that Lyra’s daemon Pantalaimon can shape-shift. When you become an adult, though, your daemon settles as one animal and never changes again. (And it can tell you something about a person’s personality–someone with a pupper daemon is a lot different than someone whose daemon is a hyena or a snake.) 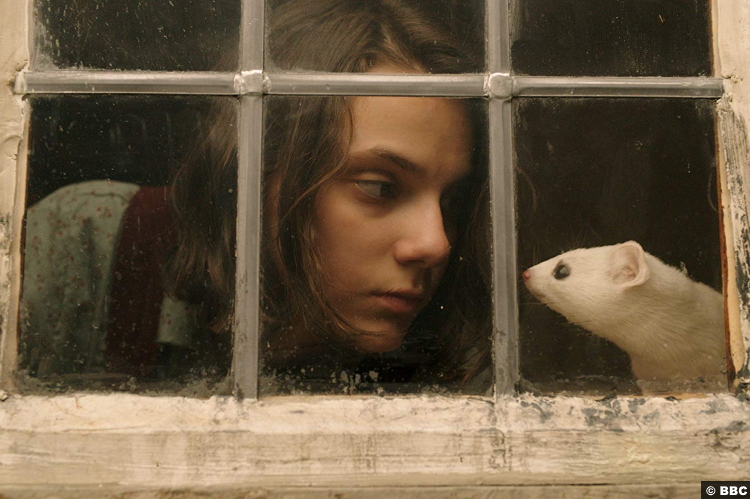 [Hi Pan, I love you!] Anyway, Lyra and Pan live in Oxford at Jordan College, her world’s equivalent of Exeter. She’s been living there since she was an infant, when her uncle Lord Asriel (James McAvoy) brought her there for safekeeping. Why would a baby need sanctuary? That’s a mystery for a later time, because we’ve got some other mysteries to get to first.

For instance, Lord Asriel’s sudden return to Jordan, which is when the show really gets going. Asriel, an explorer, has returned from the north with startling information about Dust. As for what Dust is, exactly, let’s not get into that, either, right now.

Look, Philip Pullman created a BIG world with a lot of intricate details, so I’m going to parcel out information on a need-to-know basis so we don’t get overwhelmed. Luckily, the show is doing that, too. 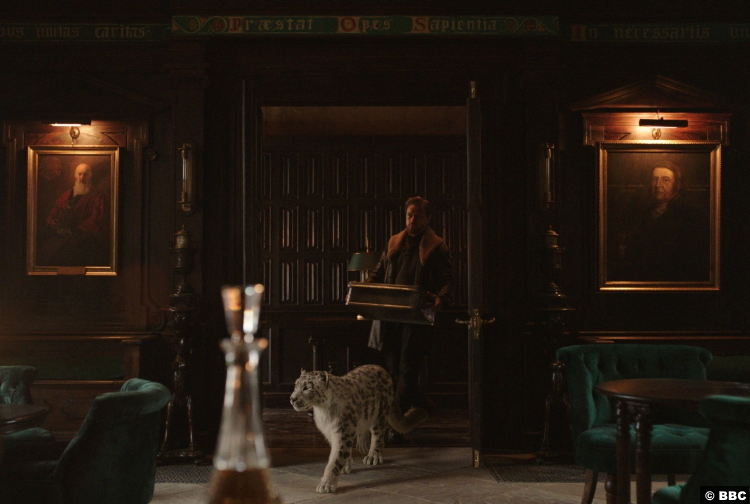 So while Lord Asriel [with his daemon Stelmaria (Helen McCrory), a snow leopard] regales the stuffed shirts at Jordan with his wild tales, they are shocked, but not just because of what he’s telling them. Viewers who haven’t read the books probably won’t even understand what he’s telling them, but you can get one thing. Whatever it is he’s telling them, it’s considered blasphemy. If these guys had pearls, then they would be firmly clutched.

Lyra, who’s spying on this talk, also has no idea what Asriel’s on about, but that’s understandable. She’s a kid, after all, with kid concerns. She just wants to skip her lessons and run around Jordan with her best friend Roger (Lewin Lloyd). But then Roger goes missing. 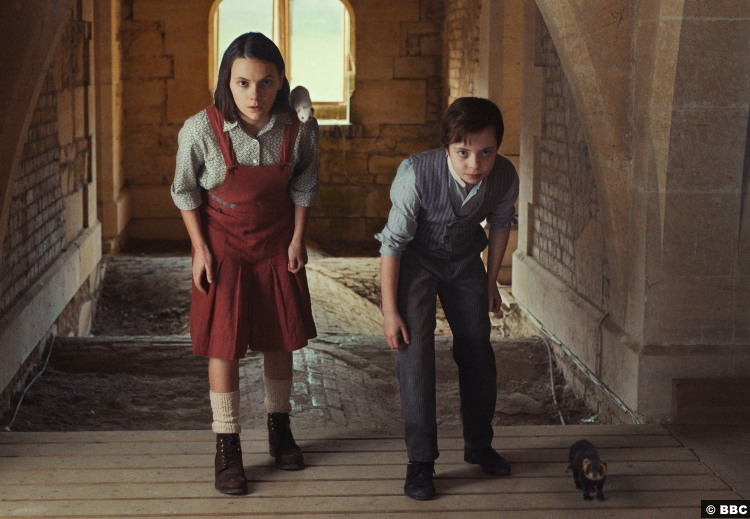 This would be alarming enough, but Roger isn’t the first kid in the area to go missing. A number of them have disappeared without a trace. No one seems to know why, but no one really seems to be asking why, either. The general rumor, though, is that they’ve been taken by “Gobblers,” whoever (or whatever) that is.

So while Lyra is understandably upset that Roger is gone, the adults in her life don’t seem as frantic. Although they’re hesitant to share it with her, they’ve all clearly got other things on their minds. This includes, by the way, Ms. Coulter (Ruth Wilson), a glamorous and mysterious woman who shows up at Jordan and wants to spirit Lyra away for…reasons. This also includes Dr. Carne (Clarke Peters), a master at Jordan, who gives Lyra a kind of compass called an alethiometer. By episode’s end, Lyra doesn’t know what it is or what it does, but that’s par for the course. And we’ll figure it all out together.

[Just kidding–I’ve committed every detail of these books to my daemon. And if you’d like me to explain things more in the future, I can certainly do that. Like I said, though, I didn’t want to bombard y’all or spoil anything, for that matter.]

8/10 – While this first episode is A Lot to take in, it builds its world almost as effectively as Pullman did. The effects are top-notch and it’s easy to believe in and believe you’re in another world. If you absolutely, positively can’t stand fantasy, you might not like it. But hey, I thought I didn’t like fantasy, either, and yet…I ended up getting a tattoo.