So it’s finally happening. After so many failed attempts, Stephen King’s magnum opus The Dark Tower is coming to the big screen in 2017, as the Gunslinger would say, “there will be water if God wills it”, and in this case Columbia willed it. So why did it take this fantasy series so long to get adapted, especially since it’s perfect for the post-Game of Thrones crowd. For that matter, what is The Dark Tower, why is it so important? Well let’s find out, you may see a door appear out of nowhere, don’t worry that’s the entrance. 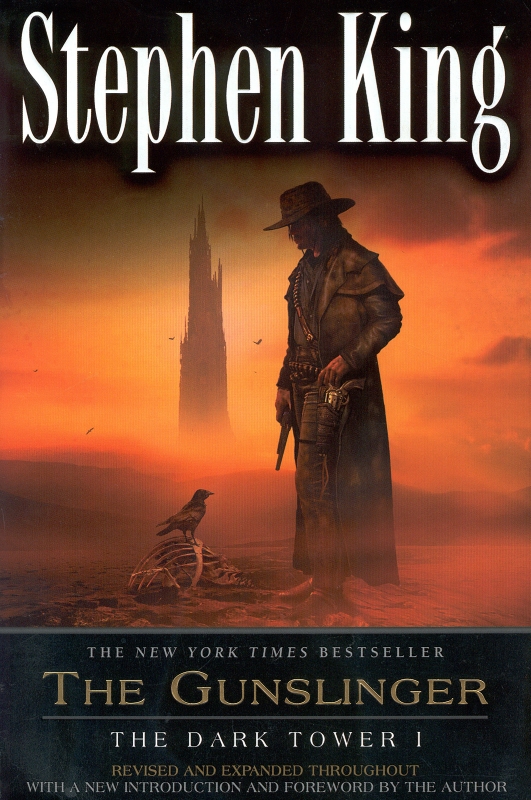 “I have written enough novels and short stories to fill a solar system of the imagination, but Roland’s story is my Jupiter – a planet that dwarfs all others (at least from my perspective), a place of strange atmosphere, crazy landscape, and savage gravitational pull. Dwarfs the others did I say? I think there’s more to it than that, actually. I am coming to understand that Roland’s world (or worlds) actually contains all the others of my making.”
-Stephen King

The Dark Tower is many things. In the books it is the nexus of space, time, and reality, not evil as its name suggests, just the centre of the universe. Outside the series, as King said, the story of Roland Deschain, last of the Gunslingers, and the line of Eld, and his quest to reach The Dark Tower, is his Jupiter, but the Tower itself is the sun. King has wrote lots of novels, lots of them, a sprawling universe of connections that comic book continuity could learn a thing or two from. Even if you’ve never read a King book, you’ve definitely come across an adaptation of his work, three of which became classic movies themselves: Carrie, The Shining, and The Shawshank Redemption. All of these stories are connected to the Tower: Roland’s world is one level, something like the apocalypse of The Stand is another, and everything serves the Tower.

The series follows the adventures of Roland, a real Clint Eastwood Man with No Name type, as he follows the mysterious Man in Black through the desert in the first book, entitled The Gunslinger: a lot of which will probably make it into the first film. The Gunslinger is a lean, very mean, book that King wrote in his early twenties. The story centres on Roland and his pursuit of The Man in Black, with an added wrinkle: the appearance of a New York boy named Jake Chambers. I won’t ruin what happens as Jake is probably the most popular character of the series, apart from Roland himself. If the film stays true to the book then Roland’s relationship with Jake will be the backbone of the story. It’s not until the second book, The Drawing of Three, that the series finds its true strength: mainly through the introductions of Eddie Dean, and Odetta Holmes, plus King really doubles down on the weird, meaning the reader has to hang on for dear life. Fingers crossed the first film is a hit because The Drawing of Three is the movie you really want to see.

While The Dark Tower is predominately a fantasy series: there is magic, spirits, and the Crimson King (who might as well be Sauron’s disturbed little brother), King never feels entirely comfortable in the genre. That is one of the reasons it should adapt so well, as King likes to ground all the crazy stuff, by making it a bit crazier as a good chunk of the series takes place in our own world, although the fourth, and fifth books literary homages to Harry Potter (yes you read that correctly), and The Wizard of Oz may be stopped by a legion of lawyers.

The Dark Tower is an ambitious project, not just a fantasy series, but one that’s in love with story-telling, chock full of coincidence (look out for the number 19), and great characters (although Odetta may be a bit insulting so some work probably needs done there).

“The road and the tale have both been long, would you not say so? The trip has been long and the cost has been high… but no great thing was ever attained easily. A long tale, like a tall Tower, must be built a stone at a time.”
-Stephen King: The Dark Tower

This quote probably describes how Ron Howard and Brian Glazer felt when they were finally given the go-ahead to adapt The Dark Tower. After nearly ten years in development hell, the film, entitled The Dark Tower, will hit theatres on February 17th 2017. Starring the perfectly cast Idris Elba as Roland, a choice that inevitably angered the internet, but its simple: a great actor is a great actor, plus Stephen King was delighted so the matters closed. Alongside Elba will be Matthew McConaughey as the Man in Black; which is also another piece of perfect casting.

The film, which is directed by Nikolaj Arcel, with Howard and Glazer producing, will be the first of a franchise that will include future film, and television adaptations, if the first film is successful. The fact that the franchise is billed as a sequel to the books shouldn’t put anyone who hasn’t read them off of seeing it. If you would rather see the film without reading the books (I strongly advise against it, STRONGLY!) think of the books in terms of the old Star Trek series, and the film as the new films. You should read the books though, if only so you can have that smug Game of Thrones feeling I’ve heard so much about.

The Dark Tower series is an iconic part of the pop culture cannon, and if we want to see more of it on screen we have to give it a lot of support. So until February, get yourself caught up, for those that have read them, read them again, and, as always, long days and pleasant nights.