A trope I can’t stand in movies or TV is when evil happens because…reasons. By that I mean, the demon or ghost or whatever is creating chaos for chaos’s sake. It is the supernatural equivalent of the explanation in The Strangers (“Because you were home”), except it’s not scary to me–it’s annoying. Following that, I’m pleased to report that Yuko has a reason. You might not like it and you might not support it, but it’s there.

She didn’t just hit these people by chance. It turns out she knew them. Yuko was what they used to call a picture bride, which refers to a kind of amalgamation of matchmaking and arranged marriages (with a splash of mail-order). The end result was the facilitation of marriages between women in Asian countries and men who had immigrated from those countries to the American west coast and the territory of Hawaii. 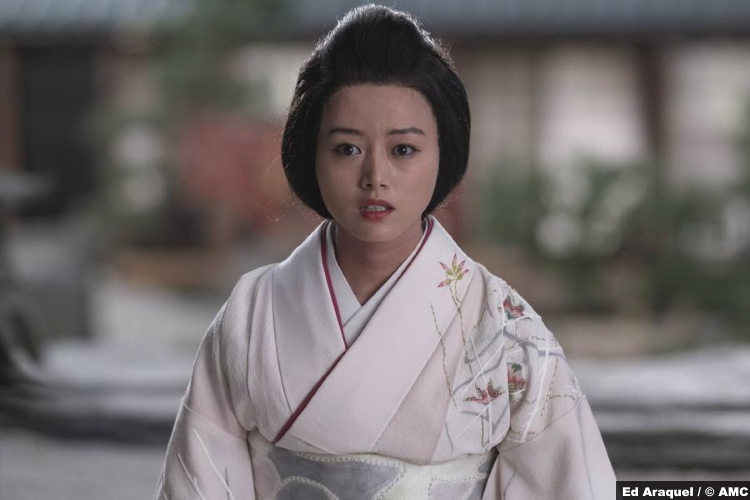 So that’s how Yuko ended up in California in 1920. Unfortunately for her, she was paired with Hideo. Less fortunate still, she is already pregnant when she arrives. Hideo rejects her and she ends up living with her baby on the street. It’s a hard life, though, so she gives her baby up. It may be the best thing for her little one, but it doesn’t make anything better for her, and the grief of separation drives her to jump off the Badger Avenue Bridge. (That’s the bridge to Terminal Island, btw.)

When she wakes, she’s in a house presumably owned by Chiyo (Natsuki Kunimoto), a woman she’d talked to just before her fall. What follows is another classic horror trope, in that Yuko slowly starts to realize that all is not well in this perfect house. In fact, it’s a real Hotel California, as in you can check out any time you like, but you can never leave. Despite the beautiful trappings, this may be hell, specifically a hell for Yuko’s bloodline. Chiyo is her relative and is also haunted by the loss of a child. 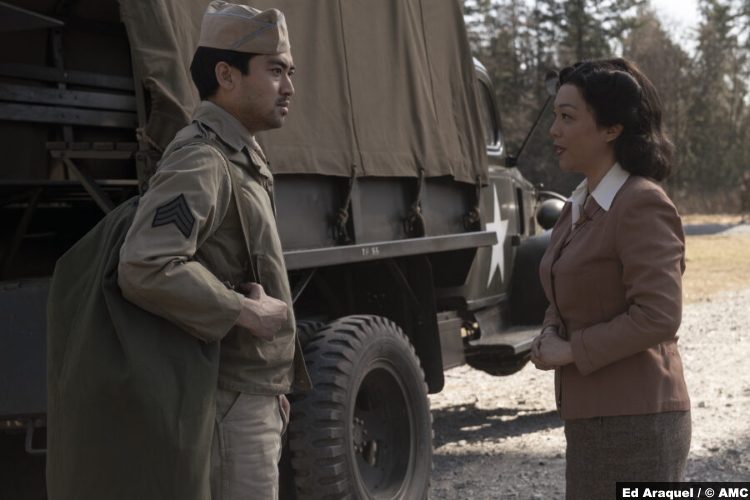 By the time Yuko fights her way out, it’s 1941. She tunnels out of the ground, looking like death, looking like we saw her last week. After which, I guess she left Chester alone? Because he’s here, back in the camp on medical leave after the wreck. And poor Chester, he has a lot to take in. There’s the fact that Luz is gone, Luz’s letter that his mom decided not to send while he was overseas, and most hilariously to me, Fumi Yoshida. It’s not really haha funny, but her open rudeness makes me laugh. Chester’s come all the way from the Solomon Islands and Fumi just WILL NOT STOP telling him what a, well, terror he is.

The thing is, though, after seeing Yuko after the crash, he believes it. He already has so much other evidence. The most tangible examples are the tiny little graves where he keeps vigil. That’s where Asako finds him, but sadly, she is filled with the spirit of Yuko, and tries to throttle him. Luckily, Chester is much stronger than his mom and fights her off. 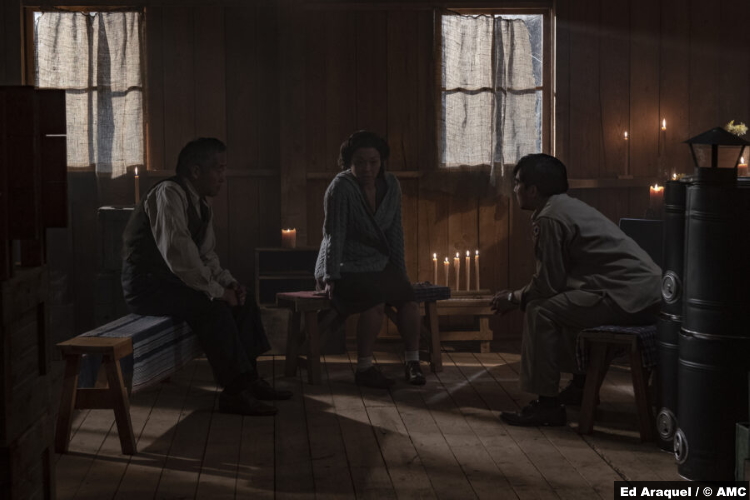 After that, the spirit leaves and Asako’s story spills out. If she looked strange before when Yuko was mentioned, it’s because that was her sister. Asako came to the States to get Yuko’s baby, Taizo–now Chester–so she and Henry could raise him. And I know this is still more for him to take in, but Chester is inexplicably cruel to Henry. Like, why? When he told him, “[Asako]’s my blood. You are nothing,” I said aloud, “Jesus, Chester!” I don’t get it.

Anyway, Yuko is also back in the camp. She steals a baby and tries to take it back to the shadow realms, but it doesn’t work. I guess you have to be blood. Chester finds her body, though. After consulting with Mr. Yamato, it’s decided that her body must be destroyed to set free her spirit. So after painting it with kanji, while Yamato chants the nianfo, they burn it on a pyre.

Okay, time-out. First of all, everybody’s super chill about finding a decades-old body that looks like she just passed. Second of all, this is a huge blaze and no one else seems to notice. No one comes running, no alarms are raised, etc. It’s wild.

And it may have all been for nothing. Because when the fire’s burned down to ashes, we can still hear her voice calling for her son. Aw, but it always works on Supernatural.

8/10 – This little twist explains a lot about the faces Asako has been making every time Yuko is mentioned. As for the twist itself, some viewers find it controversial but I’m into it. Like I said, I hate when the scaries haunt people or torment people just because. Go rattle your chains somewhere else–I ain’t got time for it.* (This is also my reaction to cat-and-mouse thrillers. Like, let’s just fight now–I don’t have the patience for a chase.)

I liked the episode as a whole overall, but I thought the first half dragged. I liked getting to find out Yuko’s story, but we spent an awfully long time on it and it zapped the pacing.

*Fun fact: My office is reportedly haunted and I’m fine with it. Then again, my mom once lived in a house that’s been featured on When Ghosts Attack, and I was fine with that, too. “Ghosts? I guess!” I say.