REVIEW: AD ASTRA is a visual and storytelling masterpiece

The year has been a bit lean on hard science fiction stories. We’ve had plenty that were space-fantasy, with big sweeping action scenes and big, bombastic soundtracks, but I’m talking about the kind of contemplative, meditative, “Science” fiction stories that used to define the genre.

The movie was originally scheduled to release in May, but the Disney-Fox merger caused a lot of shuffling to be done and while some movies suffered because of it (New Mutants is, laughably, still awaiting release), Ad Astra was moved to a much more reasonable date. A May release would have given the impression of a summer blockbuster, the kind of “action in space” movie you would expect for a Memorial Day holiday-window release. This is not that kind of movie, not by a longshot. This one feels much more at home in Autumn; even its color scheme is predominantly yellow and orange.

After a great initial trailer that gave very little away…

And some great, subtle marketing that conveyed the visual feast in store for the viewer… 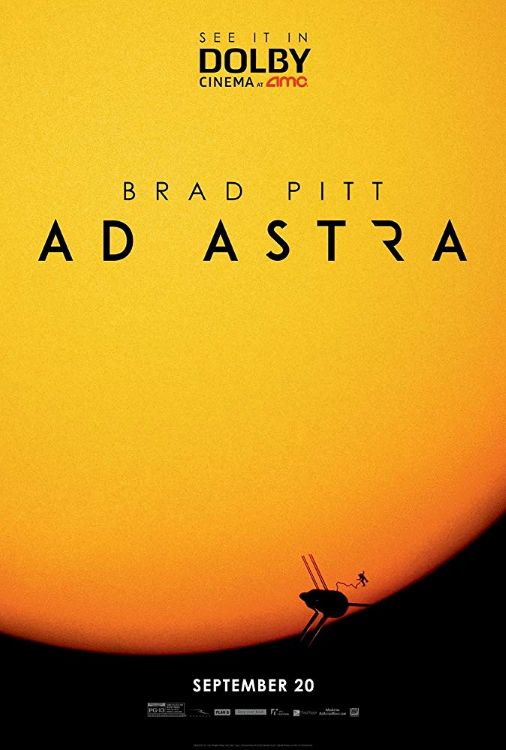 Though it lacks “blockbuster” levels of hype, it has been steadily growing in buzz and interest. Now that it’s out, did it justify the excitement?

On Brad Pitt as a leading man vs a character actor 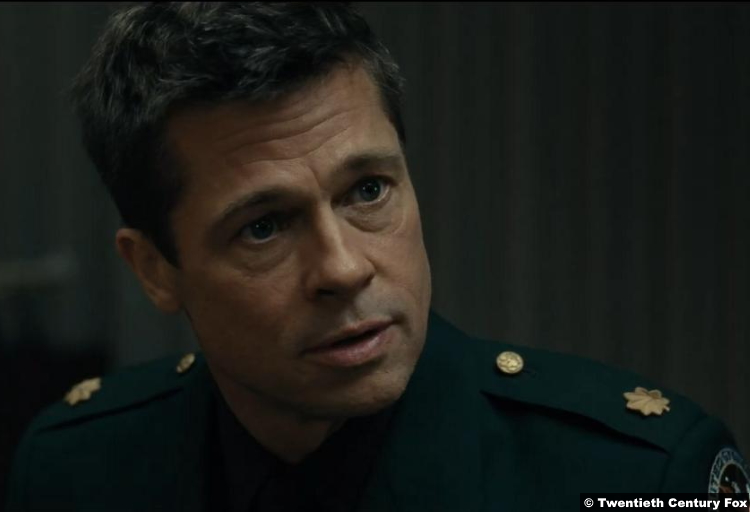 It’s been repeated so often lately it’s become needless to say: “Brad Pitt is a supporting/character actor in a leading man’s body.” It sounds like an insult, as if you’re saying “he doesn’t have the chops to put on a great performance but he’s pretty to look at so it’s okay, though he’d do better being a side-character where he can stretch those comedic chops of his.”

It’s true that Brad Pitt is everything you would want a Hollywood leading man to look like. He’s well-built, got a good head of hair, a square jawline, expressive eyes, etc. He’s a star, no doubt about it. But on those rare occasions where he gets to stretch out into something more unconventional, such as in Inglorious Basterds or Burn After Reading (the movie that really kicked off the “character actor in a lead’s body” meme), Pitt regularly displays a talent he rarely shows in his other, leading, parts. That’s not his fault; it’s simply the result of his being cast into roles that don’t take advantage of his whole skill-set, simply because that skill-set isn’t often relied on in the kind of roles a man who looks like that tends to do.

Ad Astra offers him the chance to be both a leading man and stretch his acting chops. With a great, albeit atypical, screenplay to work with, and a confident director guiding him, Pitt puts on his best performance since The Assassination of Jesse James by the Coward Robert Ford. I hope Pitt keeps taking smaller, oddball supporting roles, but I also hope he continues to work as a leading man because he’s proven more than twice that he’s more than just a pretty face. Ad Astra demanded a lot of its star—Pitt has 80% of the speaking lines, and is in 99% of the shots—and its star rose to the occasion and then some.

The tradition of one great space movie a year 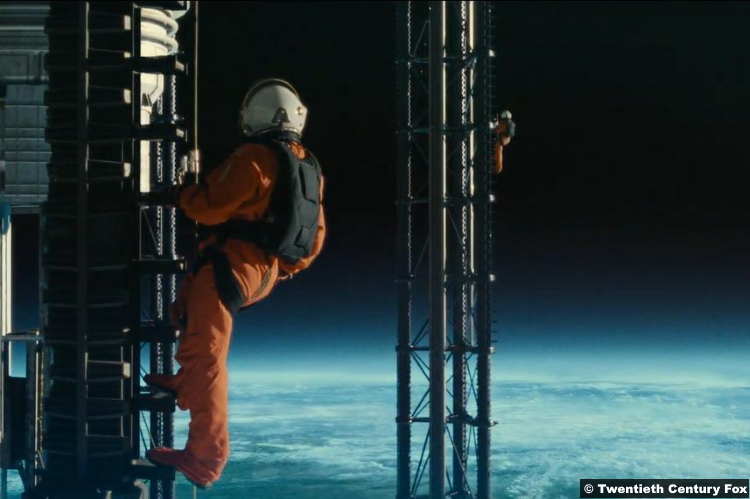 Maybe you’ve noticed this too: It seems like we’ve been getting one big space-set film a year from Hollywood, going back a while. Gravity blew everyone away in 2013. Interstellar followed in 2014. The Martian was a big hit in 2015. Can we call 2016’s Arrival a space movie? No, but it certainly feels like it belongs in the same category. That might be the lone exception. Life was a modest hit in 2017. Last year, of course, saw the release of the excellent and shamefully underrated First Man.

There’s no shortage of big, loud, action-heavy sci-fi movies. I certainly love them when they’re well made. Shoot, I occasionally even love them when they’re trash. Ad Astra serves as this year’s entry in the “one big Hollywood space movie a year” category, and it serves it well. It has the tension of Gravity, the feeling of emptiness in space that Interstellar did so well, the focus on one main character out in space that The Martian hit with, and even—in one terrifying scene—the horror that Life offered. It checked a lot of boxes and just about anyone who loves a good movie will find something to enjoy.

Incidentally, and this ventures close to spoiler territory, though it doesn’t ruin the movie by any means (you can skip to the next section if you must), but three of the aforementioned movies have one thing in common: They all speculate on alien life, and they all embrace the idea that alien life is out there. It might be scary (Life) or hard to understand (Arrival) but it’s out there.

Ad Astra also cares about answering the question of “are we alone out here” but its answer is far more cynical. To quote Arthur C. Clarke, “either we are alone in the universe or we are not, and both possibilities are equally terrifying.” Ad Astra says “we are alone” and then shows us a hint of what that reality means to someone who devoted their life to searching for…anyone else. You won’t find many “science fiction” movies willing to go there. Bravo to this one for doing it.

Not a novel, but close 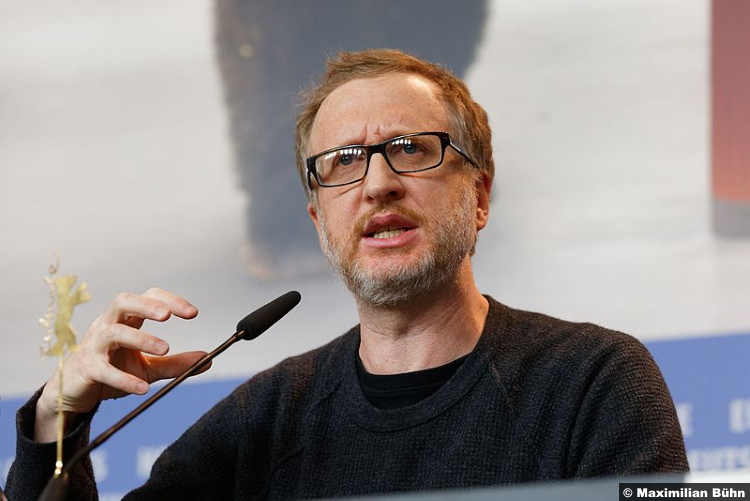 The movie is the product of writer-director James Gray, who previously made The Lost City of Z, and The Immigrant, among others. He describes this movie as “Heart of Darkness in space.” That’s a heck of an ambitious idea. Heart of Darkness is, of course, the famous Joseph Conrad story that later inspired Coppola’s Apocalypse Now. Unlike Apocalypse Now, this isn’t in any way an adaptation. It merely adopts the core idea and does its own thing entirely. Despite that, the movie feels like you’re watching a book. I don’t mean it’s like a book adaptation, I mean it tells its story the way a novel does, albeit visually.

(1) The movie features a lot of character-defining (not exposition) narration. (2) It has a very patient way it unfolds its plot, giving you only what you need to know as the story progresses. (3) There’s a ton of world-building going on behind the scenes: I appreciated the fact that this story is set in the future, but the plot didn’t dwell on it; it didn’t take for granted that it was set in the future but it also didn’t beat you over the head with it, either. The fact that our first real look at the moon is of a quasi-airport filled with Las Vegas-esque billboards and even a freaking Applebees is probably, sadly, on point. Even in the future, even in SPACE, Applebees will not die.

(4) Additionally, there’s a very deliberate partitioning in the way the scenes are edited and presented, like they are little self-contained chapters in the story. (5) The screenplay is also very wordy, which reverses the trend of modern movies which tend to favor more, shorter sentences. This script had a few, longer ones. It was like a book, albeit one with some stunning visuals.

Front-loaded storytelling and a pat ending 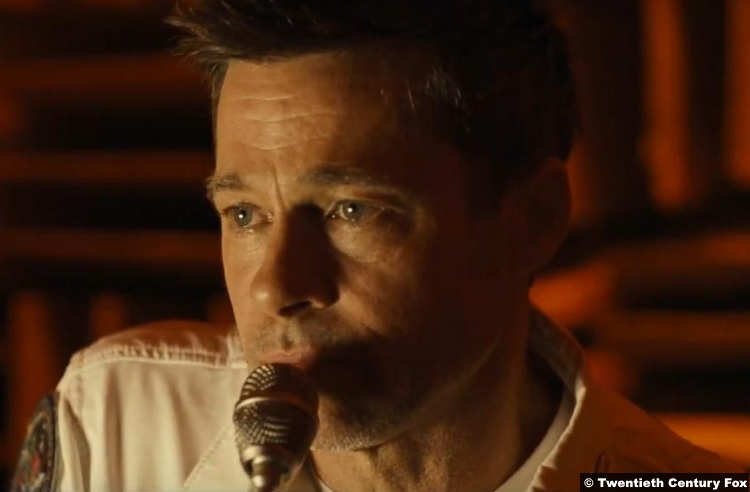 If I had a criticism, it’s that I think the story would have been better told as a book instead of a movie. The pacing of the first hour felt like it was setting you up for a three-hour epic. Instead, it rushed through its second hour, hitting its important story points and not letting many of its heavier scenes breathe (until the climax). I would have preferred a longer cut with more patience given to the second half. I suppose keeping it two hours was a studio mandate, which is something a novel wouldn’t have had to worry about.

As for the conclusion, without spoiling anything I will say that, while it didn’t disappoint me, I do see it being one that many viewers might dislike. A film like this isn’t going to appeal to casual audiences. It’s too slow, too deliberate, too character-driven. It has an ending that feels very safe, very expected, very pat. Again, it doesn’t betray the story leading up to it, but a more sour ending might have been better-received by the movie’s primary audience.

That’s a minor quibble, though, and barely worth mentioning in a film this magnificent. 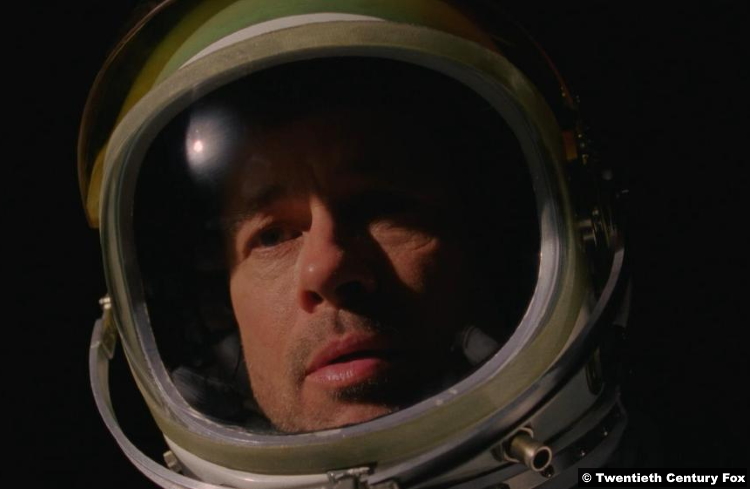