In April, everything was thrown aside as we reflected on the revolutionary and genre-defining sci-fi feature, The Matrix. In May, we talked about the awesomeness that was Star Wars Episode I….’s teaser trailer, before lamenting in June how the masterful IRON GIANT fell through the cracks. In July we reflected on the seminal low-budget horror hit, The Blair Witch Project.

Last month we took a break and considered how culturally-defining 1999 was in all aspects of entertainment.

There have been many films set in an office place but most treat the environment with little concern. Films like All the President’s Men, Zodiac, or Spotlight aren’t “office movies” so much as they are films that happen to be (largely) set in an office. If you want a movie that really illustrates the doldrums of 9-5ing it—Monday through Friday, dealing with co-workers you don’t like, bosses you don’t respect, hours that sap your joy, and pay that barely makes it all worth it—there aren’t a lot to choose from.

No, I didn’t forget about 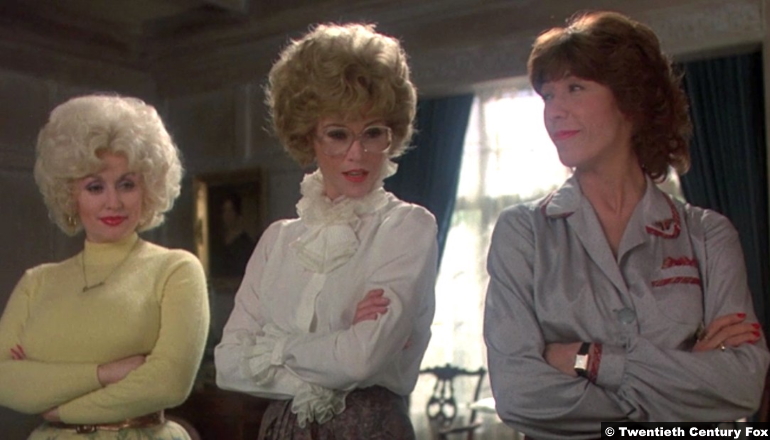 Other than that movie, there aren’t many.

Sure there are TV shows like Mike Judge’s Silicon Valley, and 30 Rock, and of course, The Office. Those are TV shows and thus have a format that’s more suitable for getting across the banality of “the daily grind at work.” To make that concept translate to a movie you need some kind of hook that can be introduced and paid off in a 90-minute window, but it also has to be a hook that reflects the “office” concept, otherwise, it’s not an “office” movie. It’s a tough tightrope to walk and that’s why there have been so few.

It might be because such stories need a delicate comedic touch, and there’s aren’t many writers deft enough to take such depressing material and find the black comedy of it. 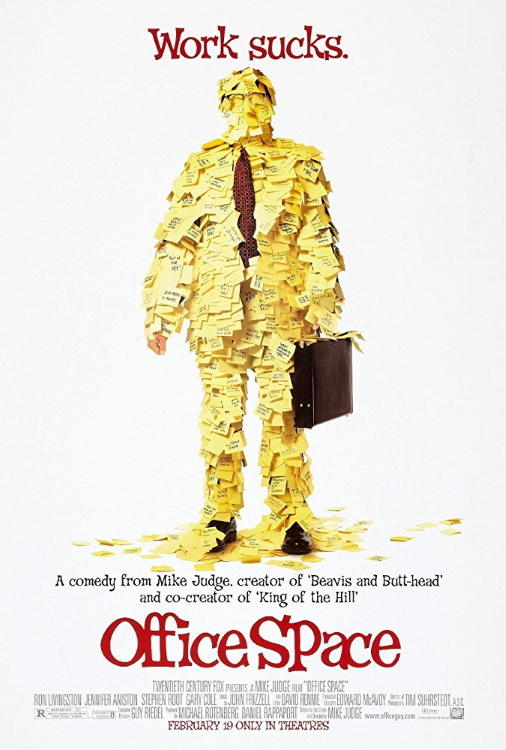 Though a certifiable flop upon release, the film quickly became a cult classic, due to repeated showings on cable and the modern meme culture that refuses to let it slip into irrelevance.

Not that it could; the secret to Office Space‘s success is that so much of the comedy behind the comedy is timeless, while the surface-level punchlines themselves are hilariously outdated. The computers, the copiers, even the purloining scheme that drives the movie’s plot; it’s all as notably passé as a Compaq Presario commercial during an episode of The Nanny.

But it’s what’s underneath the humor that makes the movie so timeless. 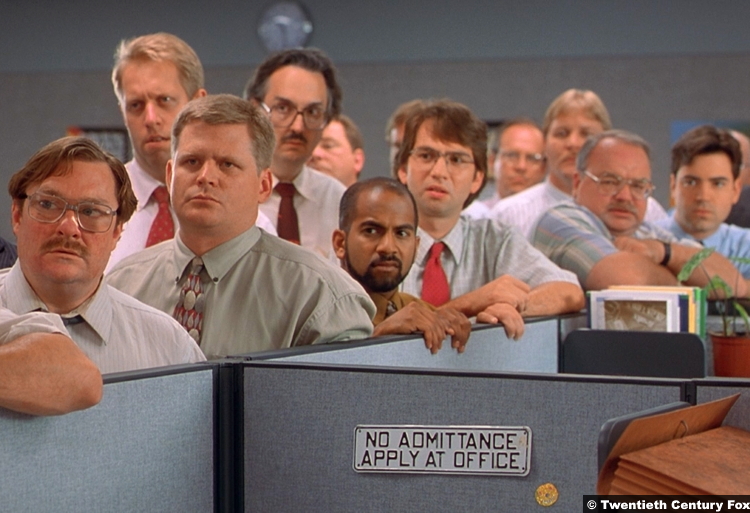 Having a boss that doesn’t appreciate you, has no regard for your free time, and openly screws you out of work entitlements (to say nothing of basic human decency)? That’s not a 1999 thing; that’s universal. Dealing with co-workers you (A) don’t like, or (B) don’t understand, or both? That’s universal.

That it was brought to life by the king of subdued satire, Mike Judge, should be no surprise to anyone who has followed his career. From Beevis and Butthead to King of the Hill, there’s not another writer in Hollywood capable of doing this story in this way. Judge’s style is deceptively simple. To the casual observer, he makes shallow, low hanging fruit comedies. Dig deeper and you see a lot of depth to the jokes, a lot of cleverness to the situations, and a lot of meaningful satire behind the characters. 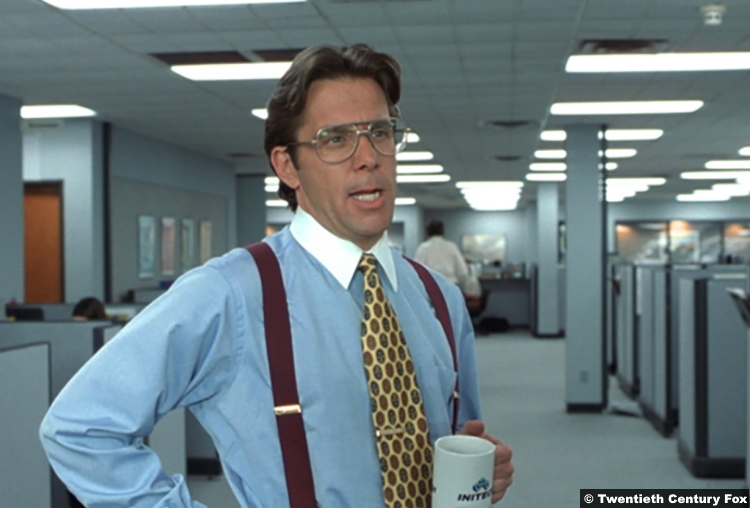 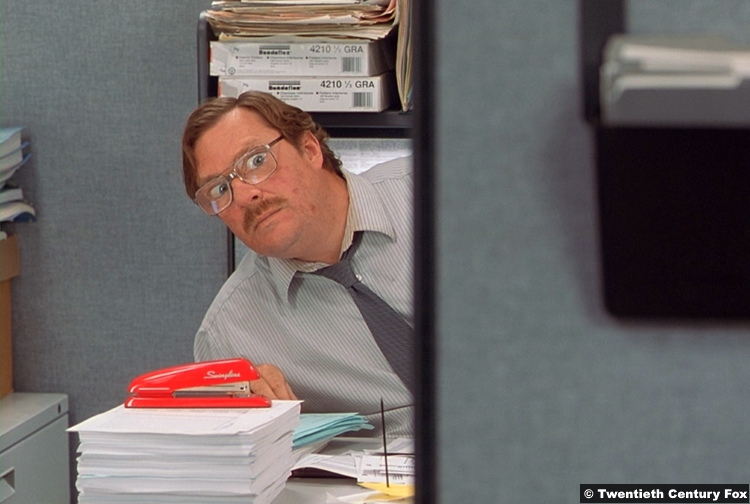 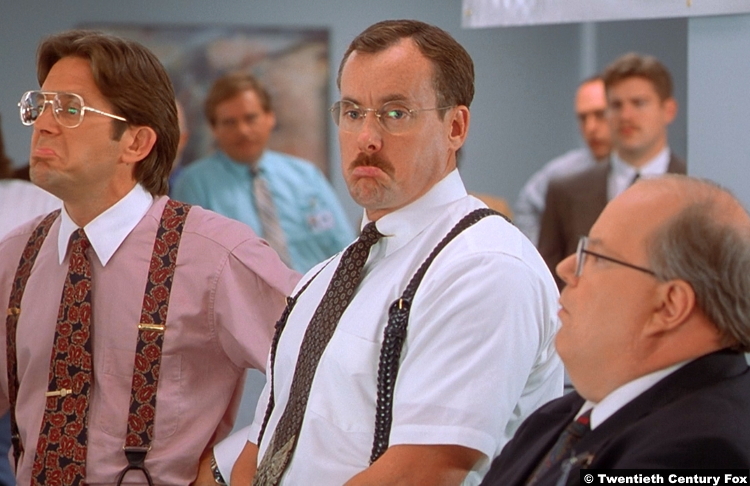 And if you don’t think the movie has resonated consider that its home video sales a year after release were so successful that the movie made more as a DVD than it did in theaters. Lots of movies make big money on home video, of course, and several that were flops eventually find a second life. Few, however, have had the instant success of Office Space. It’s as if the word of mouth took just a hair too long to catch fire that, by the time it did, it translated to DVD buys instead of ticket buys. Either way, a year after it ended in theaters a box office money loser, the movie made twice it’s budget in DVD sales alone.

Of all the projects that Mike Judge was a part of, the writer/director says the one that has given him the most fan support has been this one. People working mundane, go-nowhere jobs found a sort of personal awakening with it; folks were quitting their jobs left and right after seeing it. The rest, who lacked so full a conviction as to quit, would, at the very least, quote its best lines as a coping mechanism.

More than any other movie on this list, Office Space looks and sounds like a product of its time. The fashion choices, electronics, cars, music; everything is set in stone in the late ’90s. Despite that, the simple idea of a group of friends who hate their job is as timeless and relevant as anything you could watch today. It doesn’t hurt that the jokes still land, the off-beat lines are read perfectly, and the ending (though hated at the time by Mike Judge) still makes 9-to-5ers at the end of their rope, hold on a little longer with a little vicarious bit of celebration.