Despite her self-admitted recklessness, Eve also has enough self-awareness to question the wisdom of involving Villanelle in serious spy missions. She will end up dismissing the advice she gets, but I guess it counts that she seeks it in the first place. Maybe? 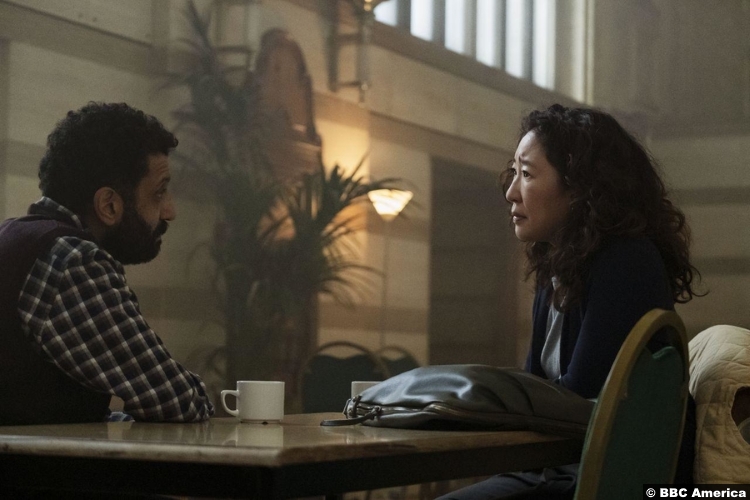 For that, she returns to Martin, the psychiatrist who secretly evaluated her a coupla episodes ago. He tells her, in no uncertain terms, that it’s a bad idea to send Villanelle to Rome. If that isn’t compelling enough for her, there’s also a disturbing run-in with Kenny at Carolyn’s house. Having been seconded to another mission, he tries to warn Eve about Rome but doesn’t get far before his mom interrupts. (Another point for those of you who don’t trust Carolyn.)

Still, it’s finally a sign that the show recognizes how foolhardy she’s being and, in fact, that’s the point. It also goes farther in giving us the fullest look yet at Aaron Peel and the threat he represents. Because it turns out Konstantin was right: Aaron was intrigued by the spirit “Billie” showed when she clocked him last week. He invites her to Rome.

At first, his interactions with Villanelle are shades of her encounter with Julian. He wants to control everything about her, down to the food she eats and how she styles her clothes. Yet, despite the fact that he’s far more dangerous than Julian, it doesn’t feel that way. Villanelle isn’t as vulnerable as she was then. She’s not hurt. In fact, she seems almost bemused by Aaron’s unceasing need for control. 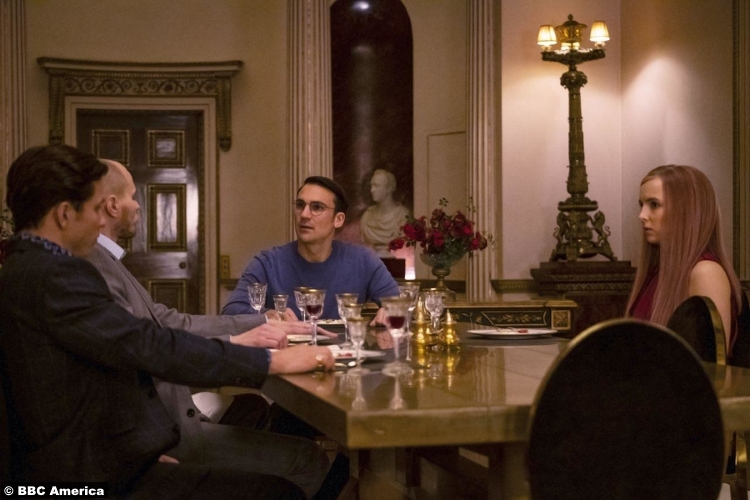 On that note, that’s what’s behind that weapon of his. What should we call it? The Voyeurnomicon? The Privacy Buster 3000? I was flippant before about it, and I still kinda feel that way personally, but unlike some people, I’m not a psychopath. I do have empathy. I can understand why having all your secrets revealed could be a nightmare. Although I do think a secret Haribo habit is a funny reveal.

And having tuned his laser focus on “Billie,” Peel is understandably unnerved when he can’t, well, peel back her layers. Hugo has made her a fake profile and it’s supposed to be “airtight,” but how long can it really stand up to the kind of scrutiny Peel can employ? That’s the part that makes me nervous. What will happen when Villanelle is backed into a corner? She can’t always hit her way out. Well, she can, but as Carolyn said, “…she really mustn’t kill anyone.” 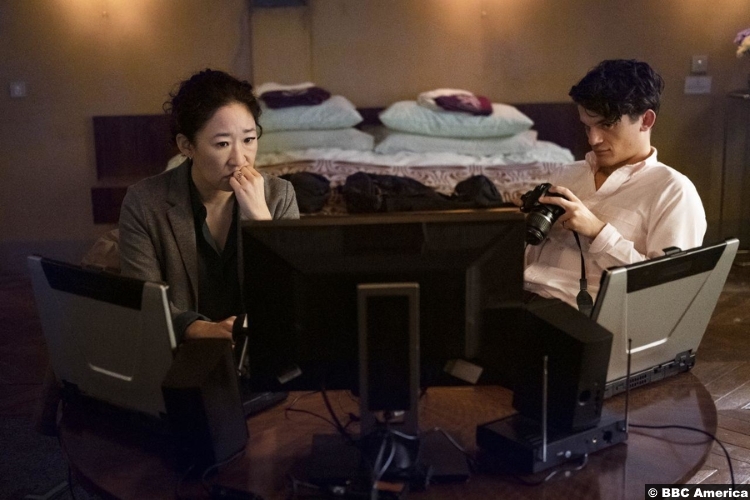 But it may not come to that. (It probably will, but it may not.) As I said, she seems bemused by Peel. At night, when she’s speaking out loud, it’s unclear who exactly she’s addressing. Eve thinks it’s for her (and gets so worked up that she sleeps with Hugo), but it could also be Peel. Villanelle herself might not even know. As she tells Eve earlier in the episode, she doesn’t know when she’s telling the truth. If you don’t know that, how can you really know your feelings?

And of course, with someone like Villanelle around, people can really get hurt. So when she appears in Niko’s storage unit, where he’s sorting out possessions with Gemma, it’s a little funny, but it’s mostly tense. Villanelle may not be the best judge of emotions, but she instinctively understands that something would be damaged between her and Eve if Niko were killed. So she does what she must think that Eve instinctively wants–she murders Gemma, leaving her on display for an unconscious Niko to find when he stirs. This is the consequence of trying to live with her, and the show understands that, at least, even if Eve doesn’t.

9/10 – Up until this point–nearly the end of the season–I’ve been getting anxious about the show, as it seemed all over the place at times. However, this episode was like a course correction or a reassurance that there is a plan in motion. As for specific plotlines, I like Peel as a foil. In some ways, he’s the most menacing opponent Villanelle has faced. Then again, he doesn’t like to get his hands dirty. There’s always a first time, though.