WrestleMania 35 is in the books and now it’s time to look back on the weekend that was. 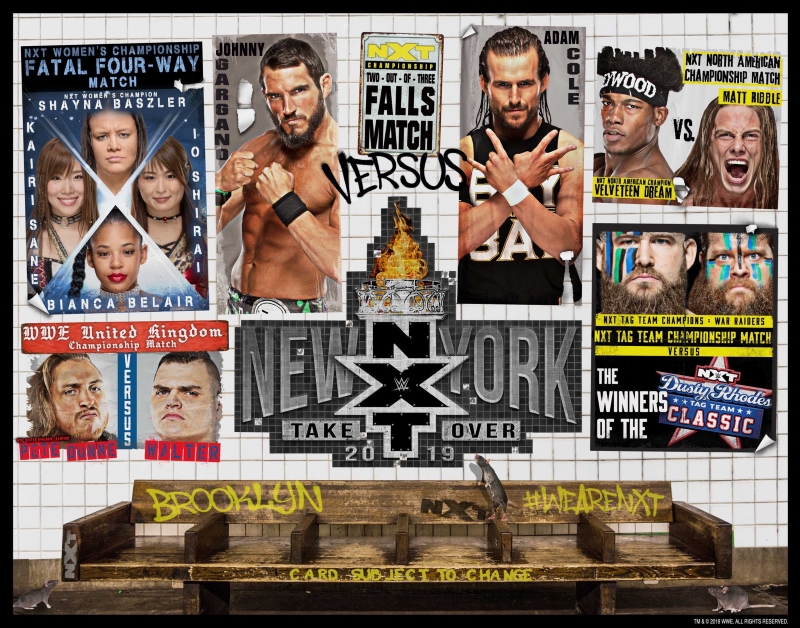 NXT Takeover: New York was arguably Triple H’s finest hour as captain of the Yellow Ship. You had a show hampered two significant issues, either of which would have been crippling for a lesser product.

First, a handful of the biggest and most important players on the show were suddenly called up to the main-roster with little fanfare or warning. NXT had been built around the continuing feud of Ciampa and Gargano, as well as the main-event presence of Aleister Black and the show-stealing talents of Ricochet. Suddenly all four men—one of whom being the NXT Champion—were tossed onto Raw simply because Vince woke up that morning and realized he had ruined all the previous NXT call-ups and couldn’t squeeze any more out of them. Gargano sort of slipped out the backdoor back to NXT but Black and Ricochet basically entered a weird “we’re leaving…but slowly” phase, and then Ciampa…

Second, Ciampa had to be pulled from the show due to injury. Everything he and Gargano had been building—two literal YEARS of storytelling—had to be nixed just like that. The NXT Title went vacant and Adam Cole (baby) stepped up to replace him.

So here’s a show where a quarter of its star power is announced to be leaving, and the main-event is changed at the eleventh hour. If Takeover: New York had under-performed a bit, it would have been understandable and forgivable.

Instead they, once again, stole the weekend.

With all the odds against it, with a weaker than usual card, a reshuffled card, and a guaranteed non-finish to the show’s most enduring storyline, Takeover: New York insisted on succeeding. Its success is no great mystery, either. Triple H doesn’t have a magic wand. What does NXT do to make it so consistently entertaining? Simple stories, good wrestling, logical booking, clearly-defined faces and heels, and a crowd of the hardest of hardcore fans that amazingly are not cynical but want the show to succeed. NXT’s fans are the best. They get grief sometimes for chanting too many things, but they’re INTO it all. They’re not doing the wave or knocking around beach balls. They’re not chanting for CM Punk. They aren’t jaded and frustrated and bored with it all; no, they trust NXT won’t disappoint them or swerve them in a stupid way and they reward good booking with fierce loyalty.

The WWE Hall of Fame Ceremony underwent some cosmetic changes to make it a more appealing event. Every year fans treat it as an after-thought, preferring Takeover or any of the indie shows happening around the city. WWE recognized this, particularly the complaint that the show ran too long with speeches that seemed never to end. They moved the stage to the ring, nixed several of the introduction speeches and moved everything along at a brisker pace. It worked.

The class was not the strongest this year, but it’s always nice to see Bret Hart. All of the speeches were good and a few were great. DX ran long but they were at least entertaining. Chyna got a nice mention as well. The fan who hijacked Bret’s speech got what he deserved that night, and hopefully gets what else he deserves in the aftermath: Mental help.

7/10 – It was good, but not good enough to make it rise from the bottom of the pile of “things to do” during Mania weekend. 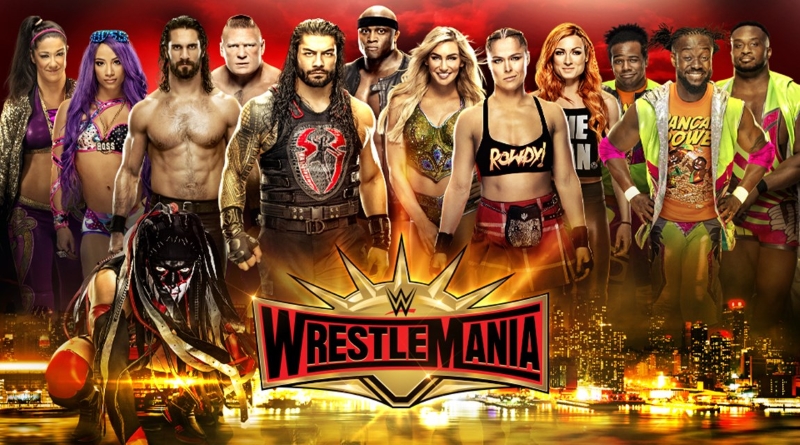 WrestleMania 35 felt like the dawning of a new day, no pun intended. Notably, there was no Undertaker. Old guard performers like Randy Orton and Rey Mysterio lost their matches. Kurt Angle and Batista retired. John Cena moved from part-time “current” superstar to bonafide nostalgia act. In many ways, it felt like the final turning of the page from the Ruthless Aggression Era, whose top stars had continued to dominate the airwaves on WWE programming.

And then there’s the three big winners: Seth Rollins ended Brock’s reign of terror. Kofi Kingston completed an improbable and meteoric rise. Becky Lynch solidified herself as the top babyface in the company, male or female.

The night was not without controversies, of which there were three: First, the lights blinded many fans during Randy Orton and AJ Styles’ very good match. Second, the event ran a stupidly long time. It began at 4pm in New Jersey and the main-event did not begin until literally the next morning, after midnight. Various solutions have been proposed: Simply make tough cuts and leave performers off the card, cutting it down to ten matches or so. Maybe spread the show over two nights (presumably Saturday and Sunday at the stadium) with two main-events, two cards, etc. Maybe just move the part-timer matches and battle royales to the Raw-After-WrestleMania and SmackDown-After-WrestleMania shows, leaving the main WrestleMania card to be just the eight-to-ten biggest and most important matches. A lot can be done, but something has to change.

Finally, there’s the controversy of Becky winning the title with a roll-up pin while Ronda’s shoulders were up. I have to say, the first running gag in the SO OF COURSE series involved WWE’s mistreatment of its “divas” division and how their matches would always last mere minutes and end with a rushed, clumsy roll-up. How stupidly ironic that this match—the first women’s WrestleMania main-event ever—went the full 20 minutes, but nevertheless ended with a roll-up finish. It was more poetic than I could have possibly imaged.

9/10 – This was a very good WrestleMania with a few moments fans will remember forever but with only a couple strong matches worth rewatching. The best since WM31 though, no question.

WWE’s annual R.A.W. received a lot of flack for its lack of big NXT call-ups or major surprise happenings. The finish was especially attacked, with the promised title for title match between Kofi Kingston and Seth Rollins being audibled-out for a tag match. I’ll defend the show for the most part because these R.A.W.’s had gotten too big. There were too many call-ups, too many huge moments; there was just too much to live up to. We needed to step back and reset the expectations a bit. This show did that and, despite that, was a solid three hours. 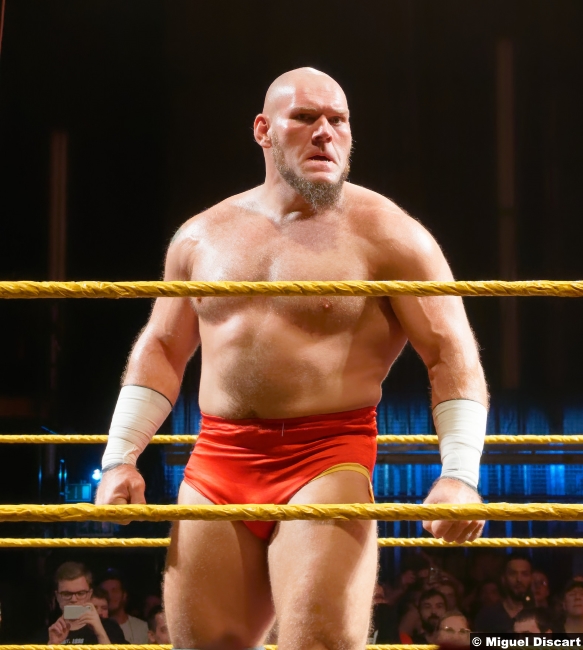 There was some complaints about the crowd but not as much as in years’ past. A lot of the “look at me” chanting and beach ball distractions were kept to a minimum this year. That being said, you know what’s funny? The audience on the R.A.W. show is basically the same as the Takeover crowd, and as mentioned earlier, you will hardly every see any “look at us” stuff on a Takeover show.

The R.A.W. crowd is jaded and cynical against WWE, and the Takeover crowd actually likes the product being given to them.

I do think it’s a bit ridiculous for the crowd to be angry at the bait and switch main-event. At least the audience came around toward the end, but every person in that arena saw both of those guys win their titles the night before. They had no right to be so fickle and spoiled. There was no reason to be mad that they didn’t get to see one of those beloved superstars turn around and lose their newly won belt the next night. How would that have made for a great ending?

If I could change anything it would be the arrangement of the episode. They probably should have just made the Kofi vs Seth match a non-title champ vs champ bout at the top of the third hour, and then done the impromptu tag and moved on. After that, you can end the night with Becky’s speech and the Lacy Evans fight that followed. That would have been an easier pill to swallow. But of course Vince wanted the audience retention going up against the NCAA Tournament finals. Judging by the ratings, however, it didn’t matter.

9/10 – I thought this was a great R.A.W. It had a good pace, teased some new matchups, promised a big shakeup next week; the crowd had hot energy, promos were great, there was a surprise Undertaker appearance and some new debuts. It was a great show.

S.A.W offered more of the same from Monday Night, compressed into a shorter and faster-paced package but with fewer big surprises than Raw (which, itself, had fewer big surprises than in years past). It started off hot with Kofi’s celebration, threw us for a curve with Drew McIntyre showing up, kicked up a Randy Orton vs (Mustafa) Ali feud, suddenly featured Braun Strowman, suddenly also featured Lars Sullivan, doubled-down on the Lacy Evans/Becky Lynch feud and ended the WrestleMania festivities with all three of the big new champs still holding their titles. Whew. The show was wall to wall THINGS happening, but few of those things were BIG things. Nevertheless, as is often the case with SmackDown, it was never boring.

8/10 – It was almost TOO much but it was never really bad. I’m curious to see what the move to FS1 brings to the Blue Show this fall, but in the meantime, SmackDown looks to remain in good hands as we end another WrestleMania season.

9/10 – Overall, this was a fun, rarely frustrating, WrestleMania weekend. The big show itself was especially notable for how many fan favorites (not just babyfaces) won. Takeover excelled. The Hall of Fame did not overstay its welcome, and the Raw/SmackDown show that followed offered nice cappers to the whole event.

Sadly, this marks the end of WWE’s annual high-water mark for fan-interest and creative output. Next comes the Spring of wheel-spinning before a month of excitement in August. For most of you, that means “See you at SummerSlam.” For the rest of you, more loyal, fans, we’ll see you again soon.

We’ll have more post-Mania coverage on the site very soon.